Still on the market after about six years, Sharon Stone’s second Beverly Hills estate is a real stunner. The house was built in 1991, and the actress bought it in 2006, even though she was already living in another lavish mansion in the affluent city. Only four months after the purchase, she decided to put the residence back on the market, this time asking $12.5 million for it.

Since then, no one showed enough interest in the property to actually buy it. As a consequence, its price dropped gradually and right now interested customers will only have to pay $7.5 million for this lavish home. The property includes 4.85 acres of land, including a meditation garden, fruit trees, tennis court with pavilion, resort-style pool, covered parking for up to 14 cars, and decorative waterfalls and bridges.

In the middle of this little paradise the mansion is currently unoccupied, and consequently features only minimal furnishings. There are 5 bedrooms in the main house, two more in the guest house, and a total of 8 and a half baths. Amenities include a chef’s kitchen, large living room with high ceilings and wet bar, gym, paneled library with built-in bookcases, and top-notch media system. 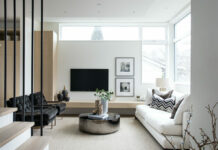