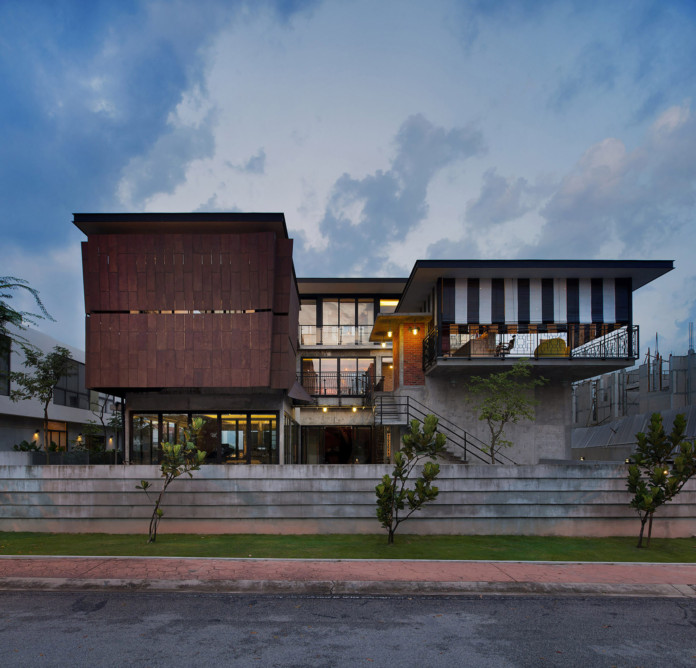 Featuring a relatively complicated design as well as a series of retro themes, the House at Glenhill Saujana in Malaysia was completed by Seshan Design and features 6,070 square feet of living space. The architects wanted to create a home that was modern and comfortable as well as unique and elegant, which is why they ended up relying on various themes, colors and finishes that somehow blend into a bright and welcoming living environment. 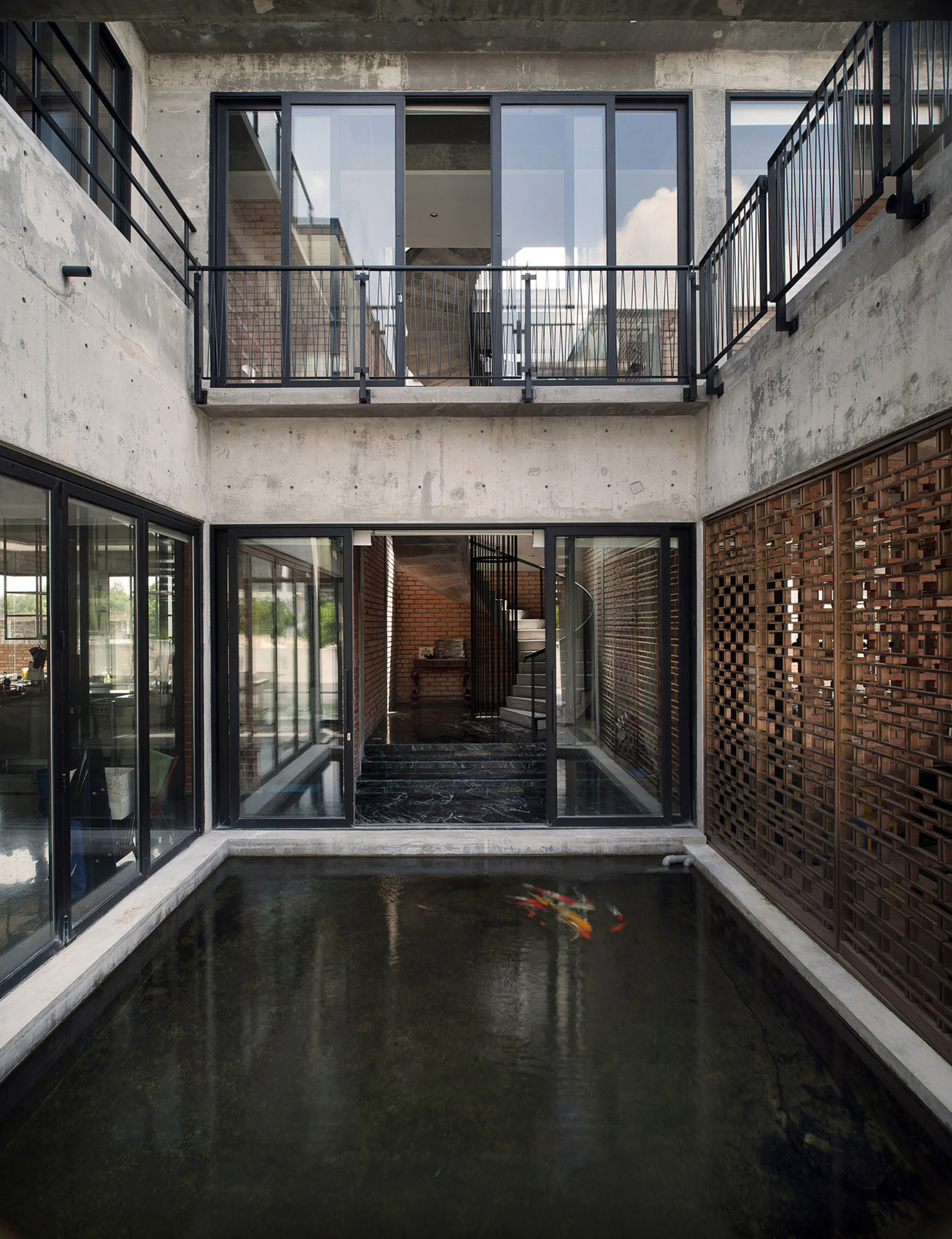 They also wanted to ensure cross-ventilation throughout all rooms, but they could not implement this in the upstairs rooms because of the windows’ designs. However, the common living spaces as well as the ground floor receive plenty of natural ventilation, while natural light is welcomed within the abode through to a central courtyard. 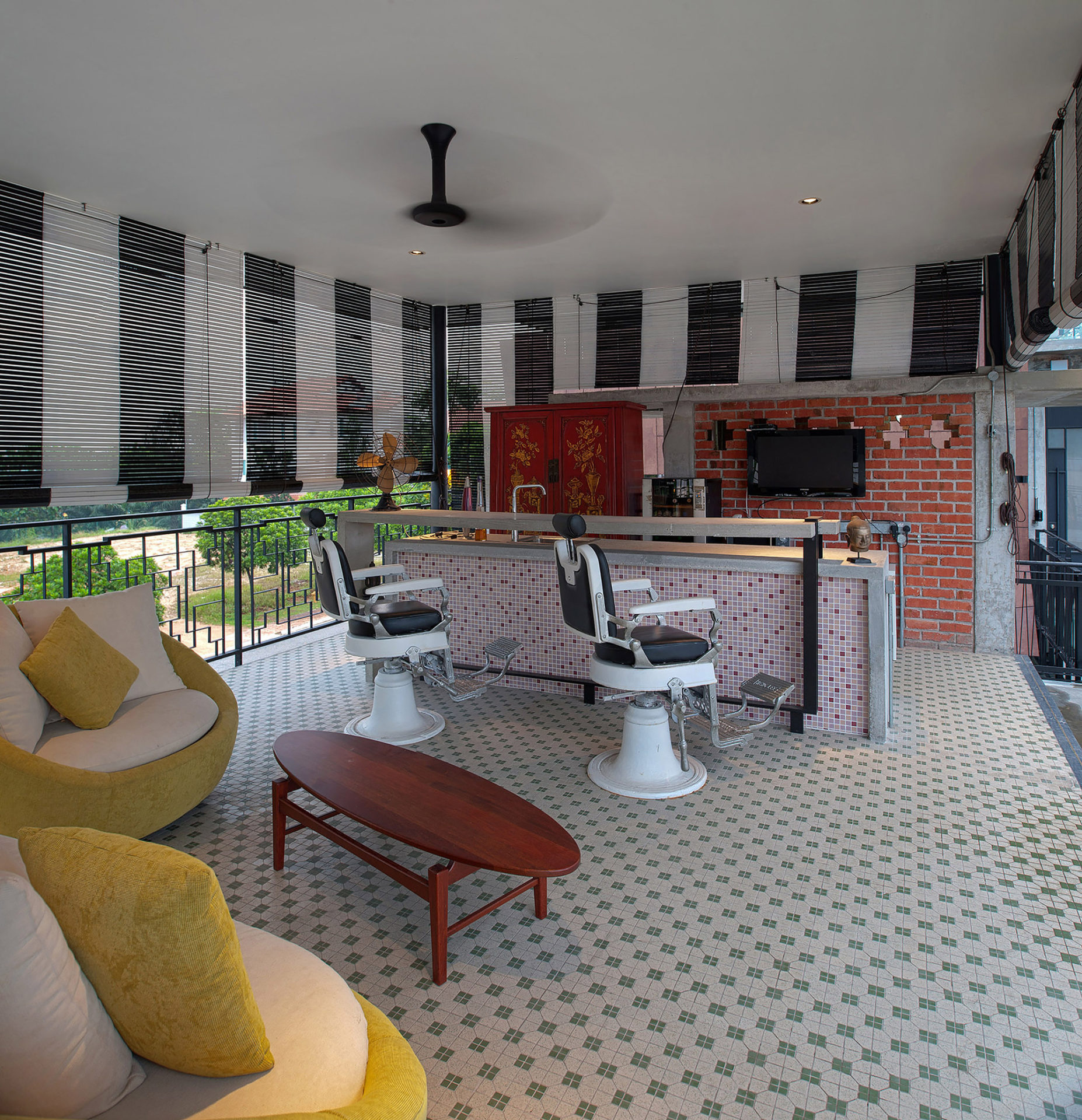 The furnishings are actually sourced from the owners’ private collections that were acquired from China and Bali throughout the years. Furthermore, several soap opera scenes from the 1970s were used as inspiration to create several elements within the home, including the full height swivel bronze paneling in the driveway and the lounge railings. These features are enveloped or made out of bronze and contrast beautifully with the abode’s black and raw finishes. 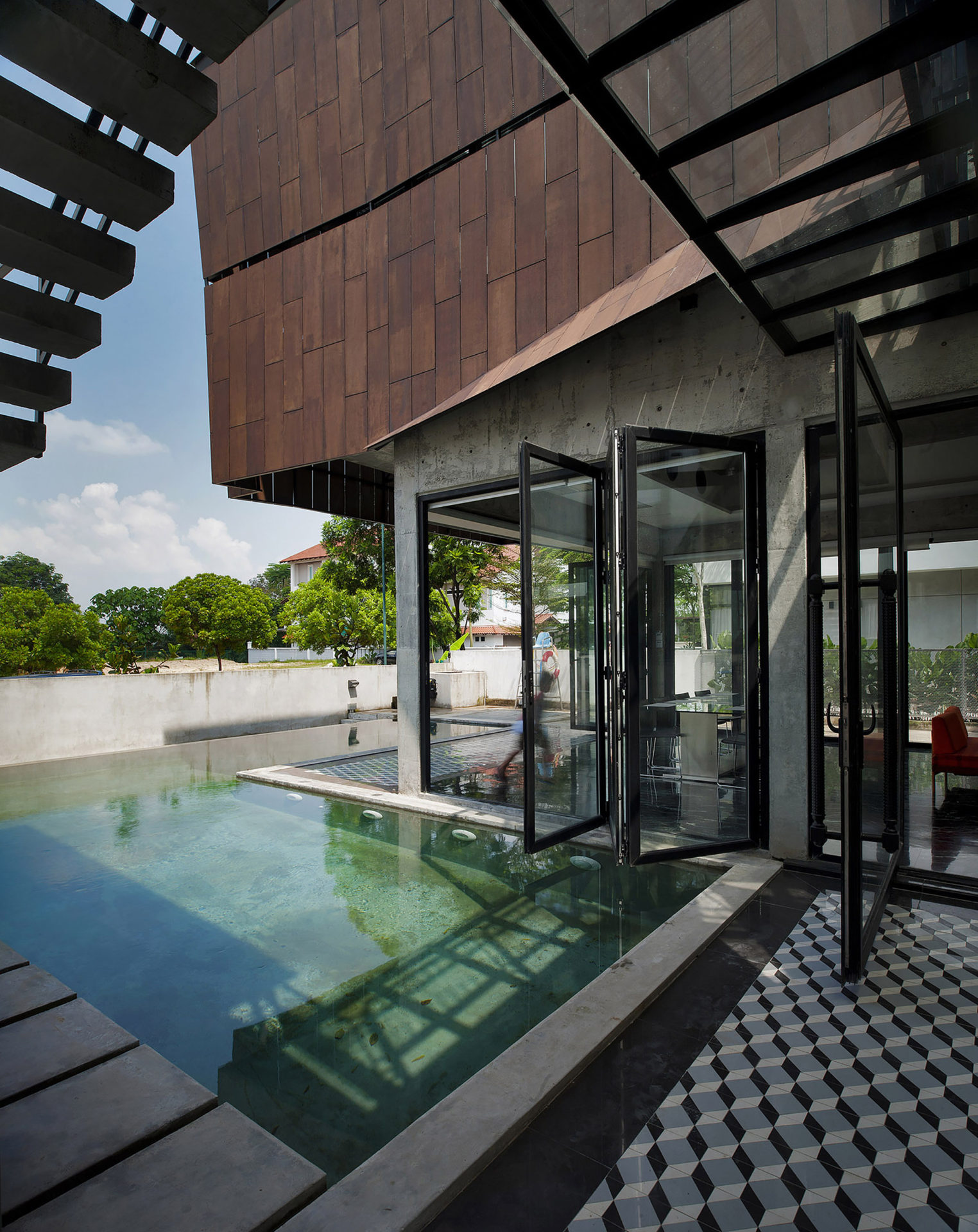 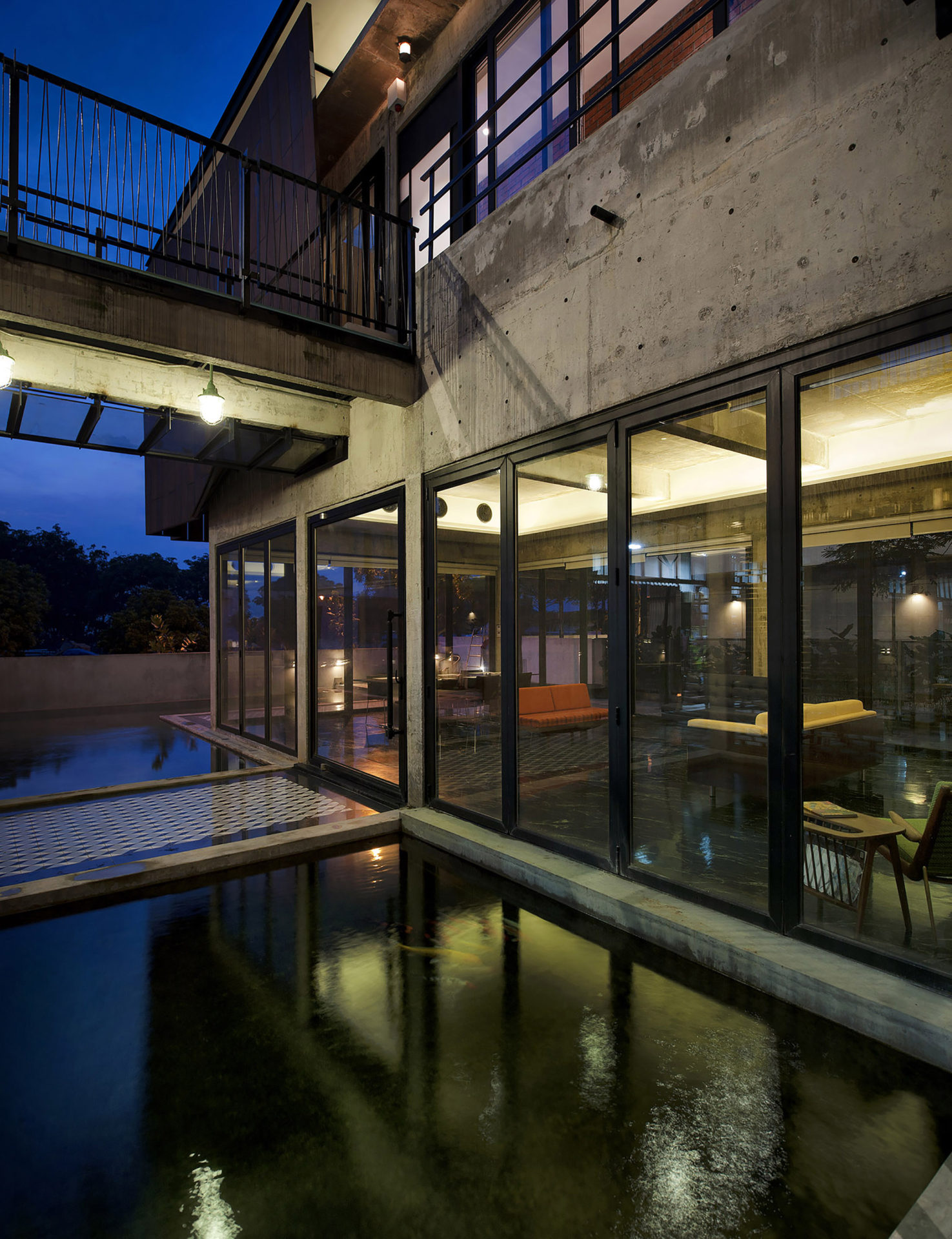 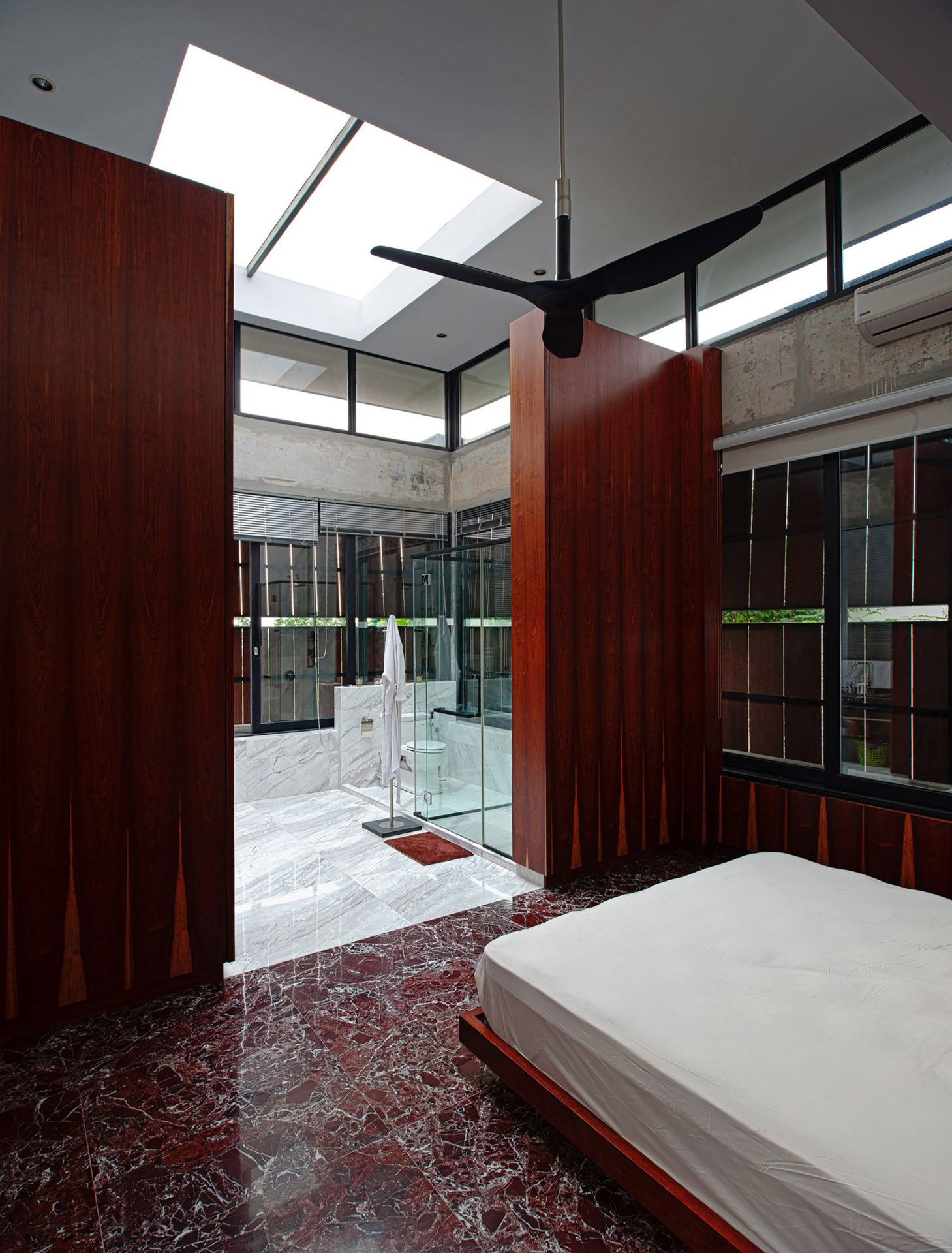 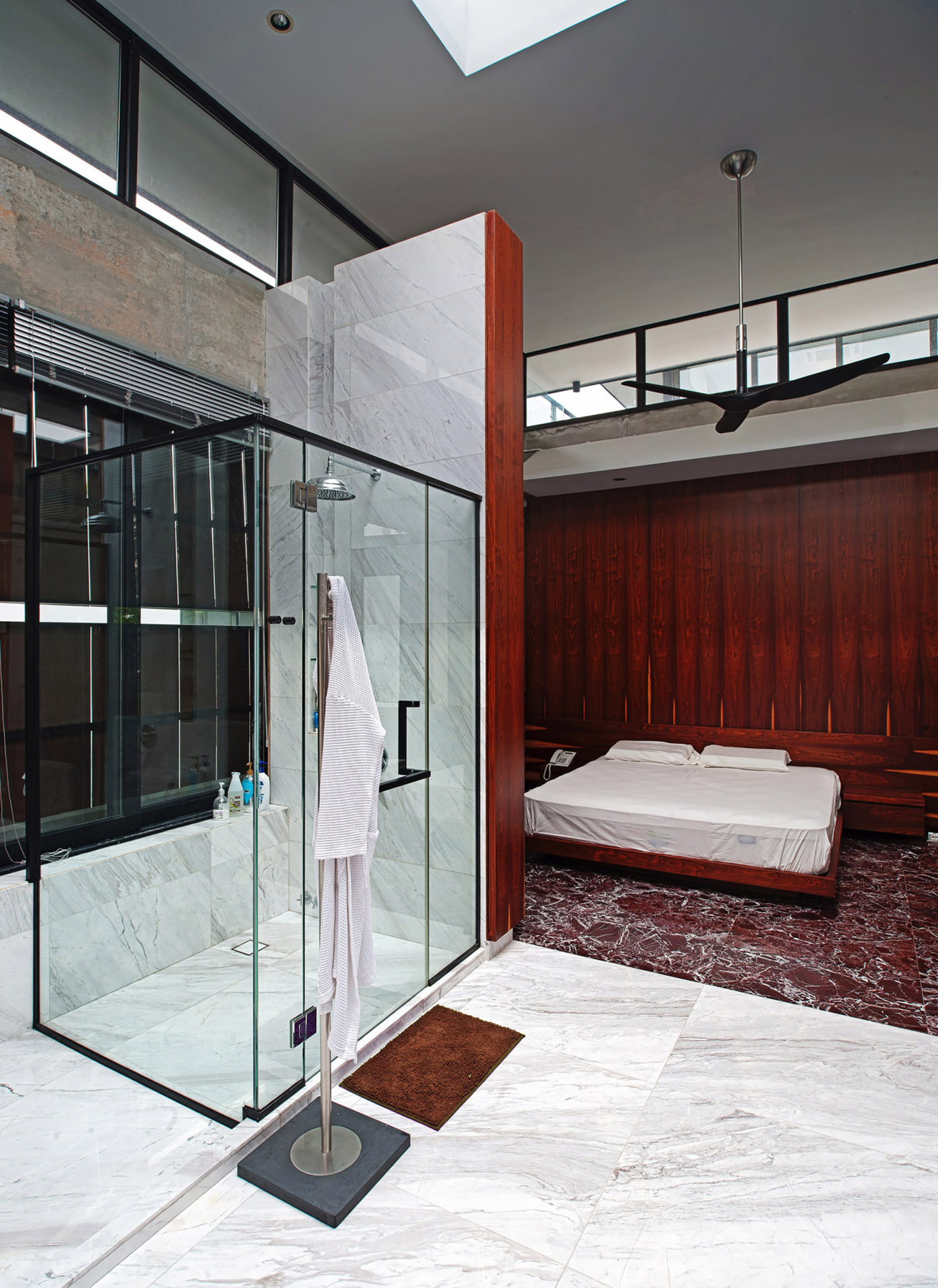 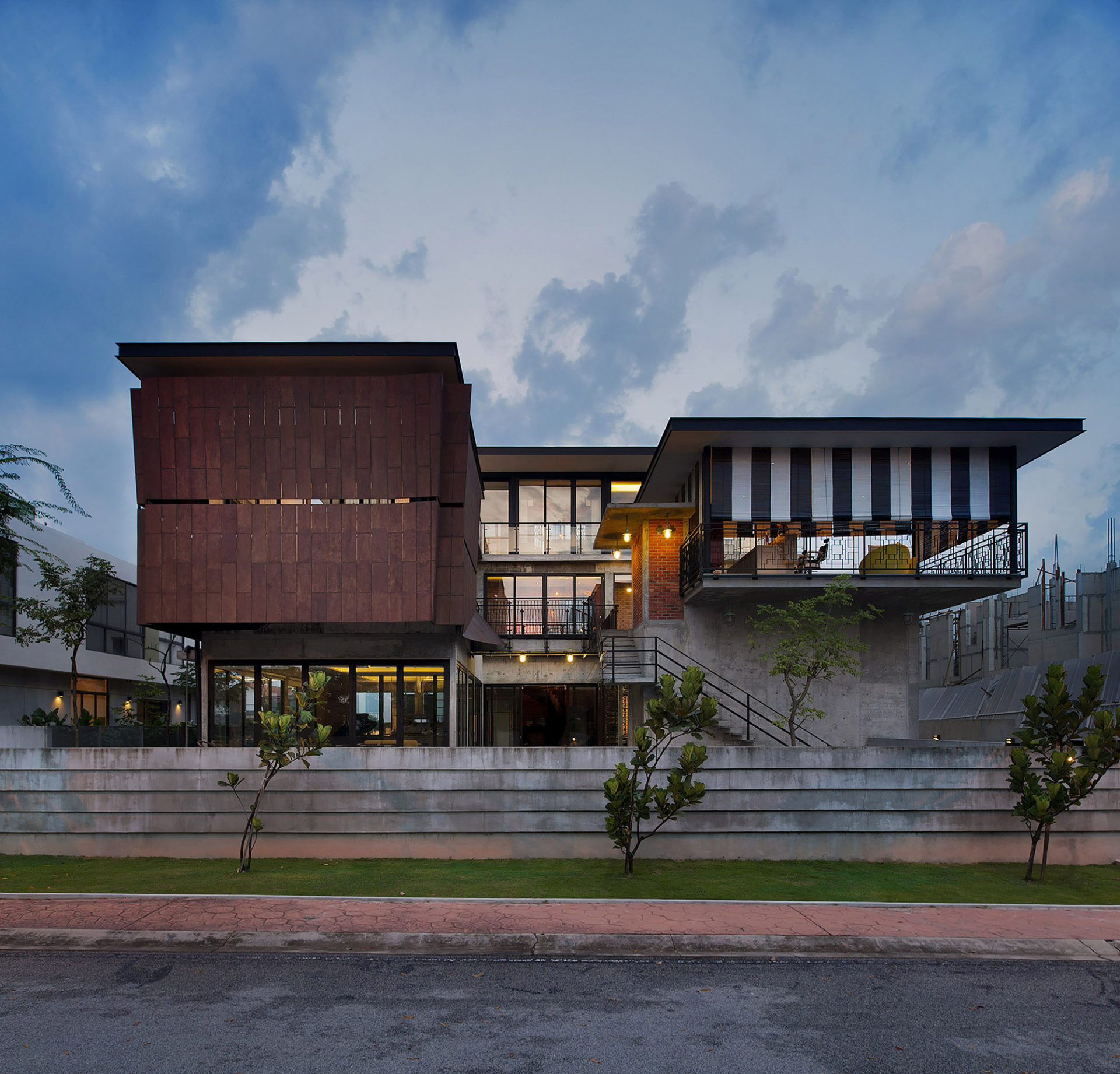 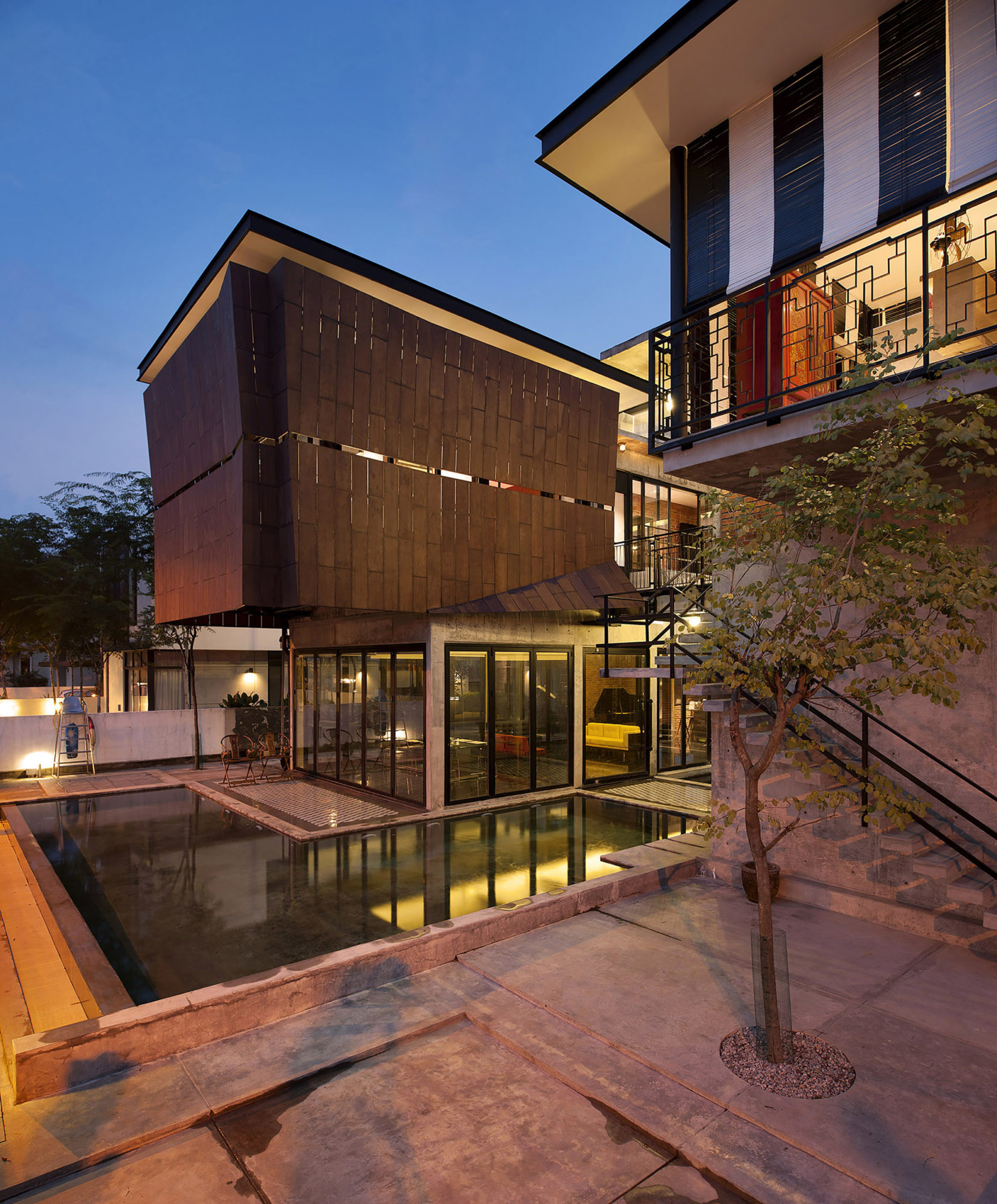 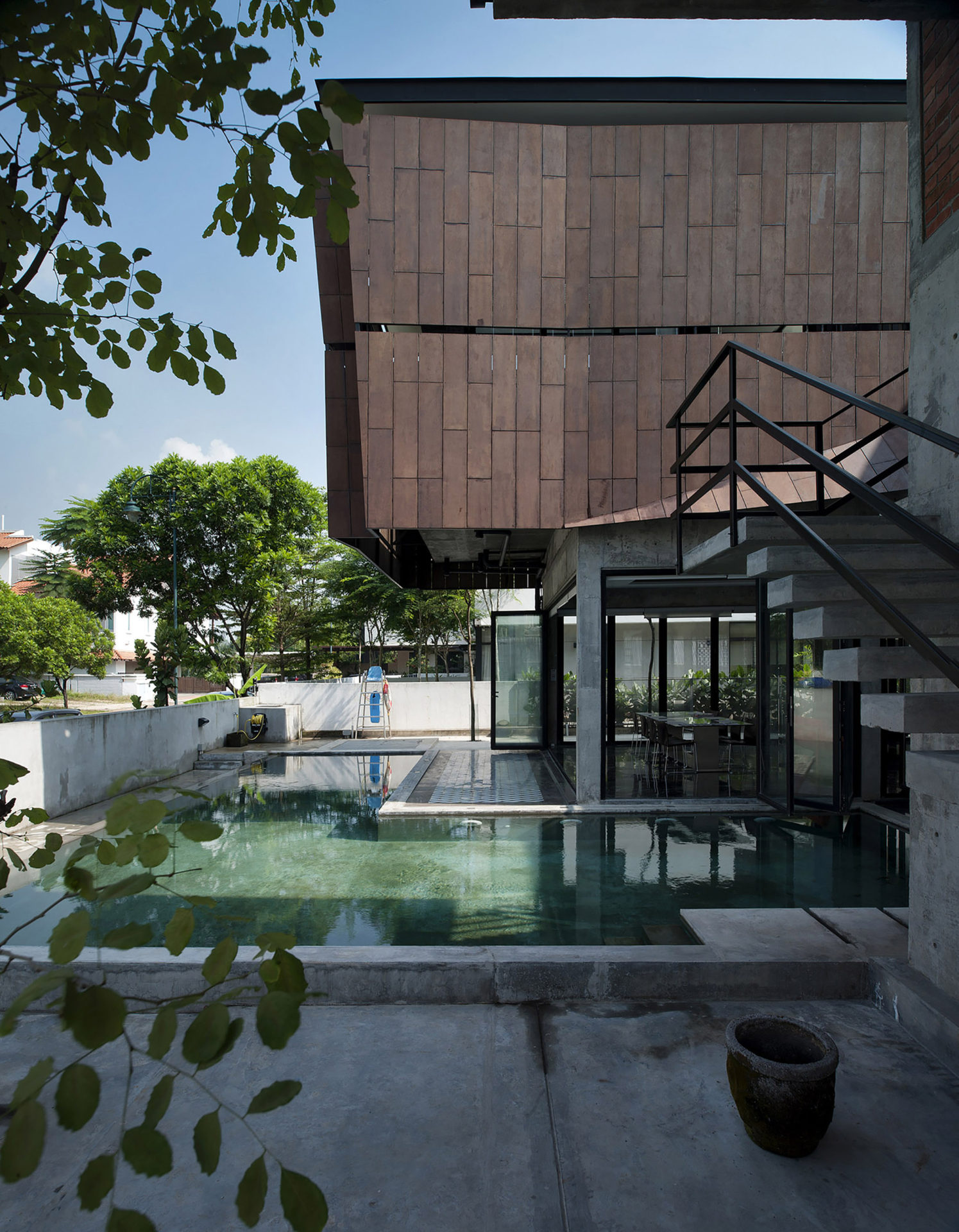 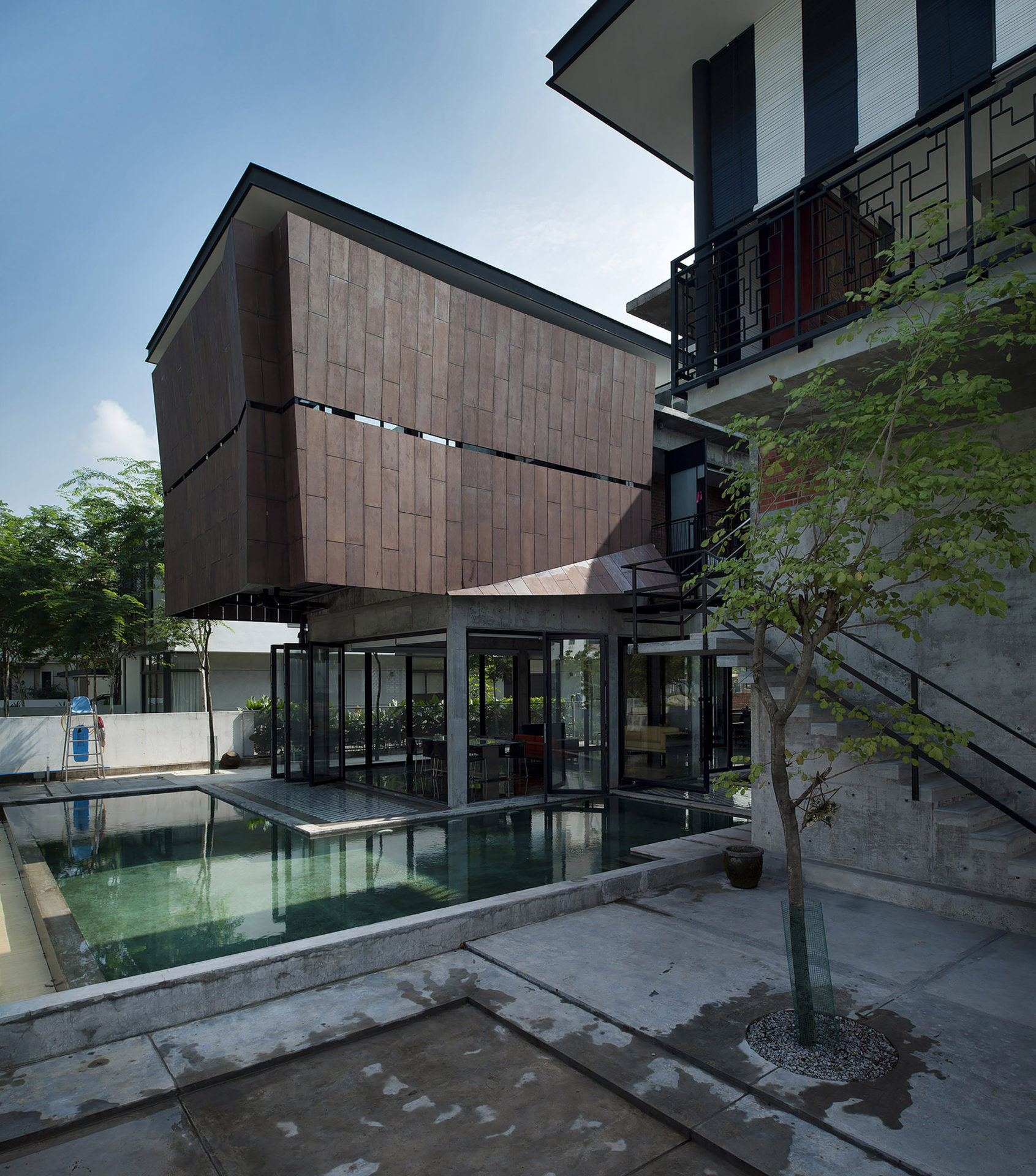 We were actually recommended to the clients by our friends who are also architects but were too busy to take on the jobs themselves. The clients had already started building the house  but after a while they  had started to  search for another Designer/Architect to take the project to a new level and achieve the new ideas the clients had envisioned.

The clients’ earlier house was built in the Tropical Balinese resort look which was popular about 15  years ago.   For the new house, the clients wanted something different so they attempted to build the  house in the  currently popular raw/industrial look with fair face concrete and fair face brick wall elements.   But the clients (Captain Lee in particular) also had an affinity of all things retro and vintage. He was based in China for work and thus had access to a lot of retro products. He even brought back a vintage World War II Russian  motorbike with side car!

So they wanted the house to  have a fairly retro theme (or themes as it turned out!) to it, especially for the interiors.  We met, took the clients to see some of our ongoing projects and we hit it off!

When we were brought in, the house was already complete structurally – all the concrete structure, roof and most walls were done. The windows were not in yet – they were enroute from China! – the client  had really good quality double glazed windows and doors ordered and manufactured in China and sent to Malaysia to be installed by the main contractor here.  We made a trip to Guangzhou as well to meet up with the supplier and check out what other cool building materials/ components we could get from there.

We had to assess the house as a whole, if possible try not to change too much unless it was really necessary to make the spaces work better.  Clients had already engaged a kitchen specialist to sort out the dry and wet kitchens. We re-looked at all the spaces, adjusted some walls here and there, redid the entire electrical and lighting layouts, redesigned all the bathrooms, and also proposed additional elements such as railings, screens, panelling, custom lights and other architectural devices.

The really best part of this project was we had really quirky clients(!!) who like so many different things and anything could be possible!  And the fact that the clients had access to getting fairly exotic components sourced and manufactured quite inexpensively from China made it all the more appealing!

There was no one real underlying concept per se for this house but the client ended up themeing different parts/areas of the house.  The design of the house also evolved from ideas and discussions going back and forth between us and the client.  Either the clients or us would come across something  interesting – like something we saw in a magazine/online or they in a shop in china ,and we’ll start sending pics to each other and be like “this is cool!!! lets do this!!!”  – that’s pretty much the design process!!!

The interesting thing is, the house could actually take the variety and ecclecticness of it all. It became a house  which was very rich in content.

The first floor outdoor lounge and bar, was  envisioned by the clients as a marriage of both colonial and classical Hong Kong themes . The black and white intervals of the bamboo blinds portrays the colonial influences in Malaysia , whilst custom cut geometrical ceramic tiles and symmetrical Chinese influenced railings in black lines three sides of the lounge. The client managed to source for old barber chairs as the bar stools and we re-jigged an existing vintage cabinet he had into a bar cabinet.

The top floor was orignally inspired to look like Mies Van der Rohe’s Barcelona Pavilion and we had the idea to actually make his wardrobe door panels  out of the  signature travertine used in the Barcelona Pavilion so they became the backdrops to the rooms. After developing the design and sorucing the material, it turned out to be too expensive and complicated a feat. So we decided to scrape the idea.

Captain Lee then came across a wardrobe supplier in China who could print full size graphics on  wardrobe doors so thats when he got the idea of printing custom graphics on them! So in the end the children’s love for music was aptly represented by these built in wardrobes with large silhouettes of the two great music legends – Jimi Hendrix and Jim Morrison!! We dug up and editted the images to suit which we sent to China to be fabricated. The installations were done here by the local interior contractor.

The main master bathroom screen at the front was actually conceptuallized a lot earlier as a facetted and fairly organic formed skin around the master bathroom. It was delayed and pushed to end due to costs and also because the client wanted to prioritise moving into the house first. So the screen was the last thing to end up being installed. We had to revise the design many times until we came up with a design that suited the clients’ budget. It became a steel framed structure, clad with stained cement board. When it was complete  – we were all so excited! It really looked like part of the Sandcrawler (the Jawas’ mobile home in Tatooine from Star Wars). It also really looked like we clad the house with corten steel! That’s one of our specialities –  we can make inexpensive material look really expensive!!!

The glass bridge links the 1st floor terrace towards the master bedroom and the external floating steps from the poolside. Looking above from the entry foyer , frosted glass panels over the bridge permeates shadowy silhouettes.

Elements from the old Malaysian shop houses are borrowed, from the folding metal sliding doors /sliding grills of the storeroom and children’s bedroom floor to the “V” profile railings that’s prominently featured across the house.

External door elements , the main and side gates in particular were designed from scenes from the movie “The Great Gatsby” with Art Deco elements. Symmetrical intricate lines that breaks the monolithic outlook of the ” ziggurat”perimeter walls.

Furniture comprised of the clients’ private antique collections acquired throughout the years from Bali and China, several quirky adaptive reused furniture pieces and a series of custom made furniture that takes us back to the American 50’s era (heavily inspired by Madmen tv series)

Thin profile trees softens the outdoor hardscape, with a trampoline at the rear for the children’s to have fun exercise !Three different floor finishes creates a visual separation of each floor. India green for the lower grounds, rosa levanto for the first and cement flooring for the 2nd floor.

We tried to incorporate as much natural  cross ventilation as possible but were unable to at some areas especially the rooms upstairs as the glazings and windows were all ordered and fabircated in china when we were engaged.  Luckily they were double glazed panels so the heat gain was not so drastic in the rooms. The common areas and ground floor are all very well natural ventilated.  The high ceilings, central courtyard and  loads of glazing help in terms of natural lighting. 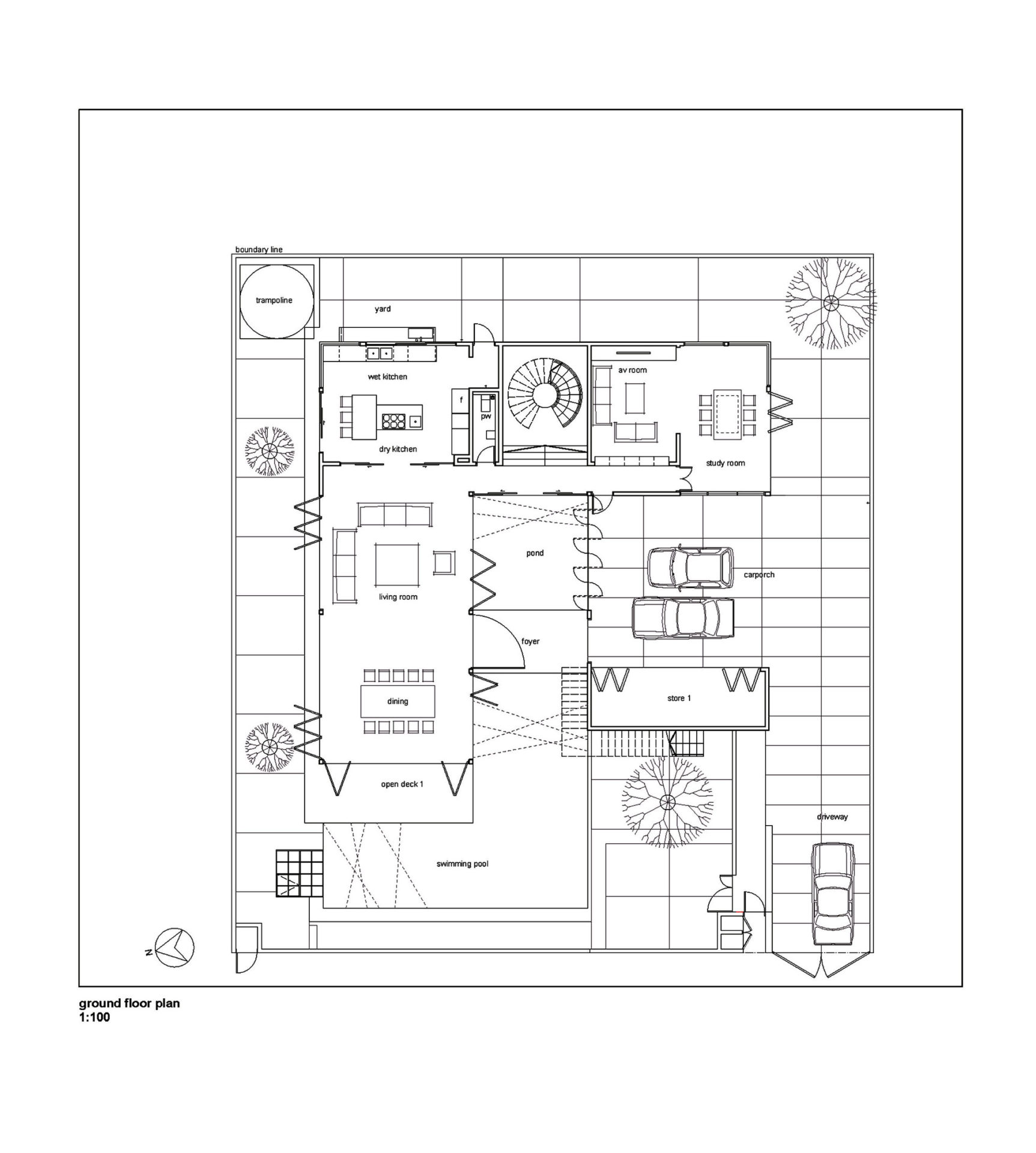 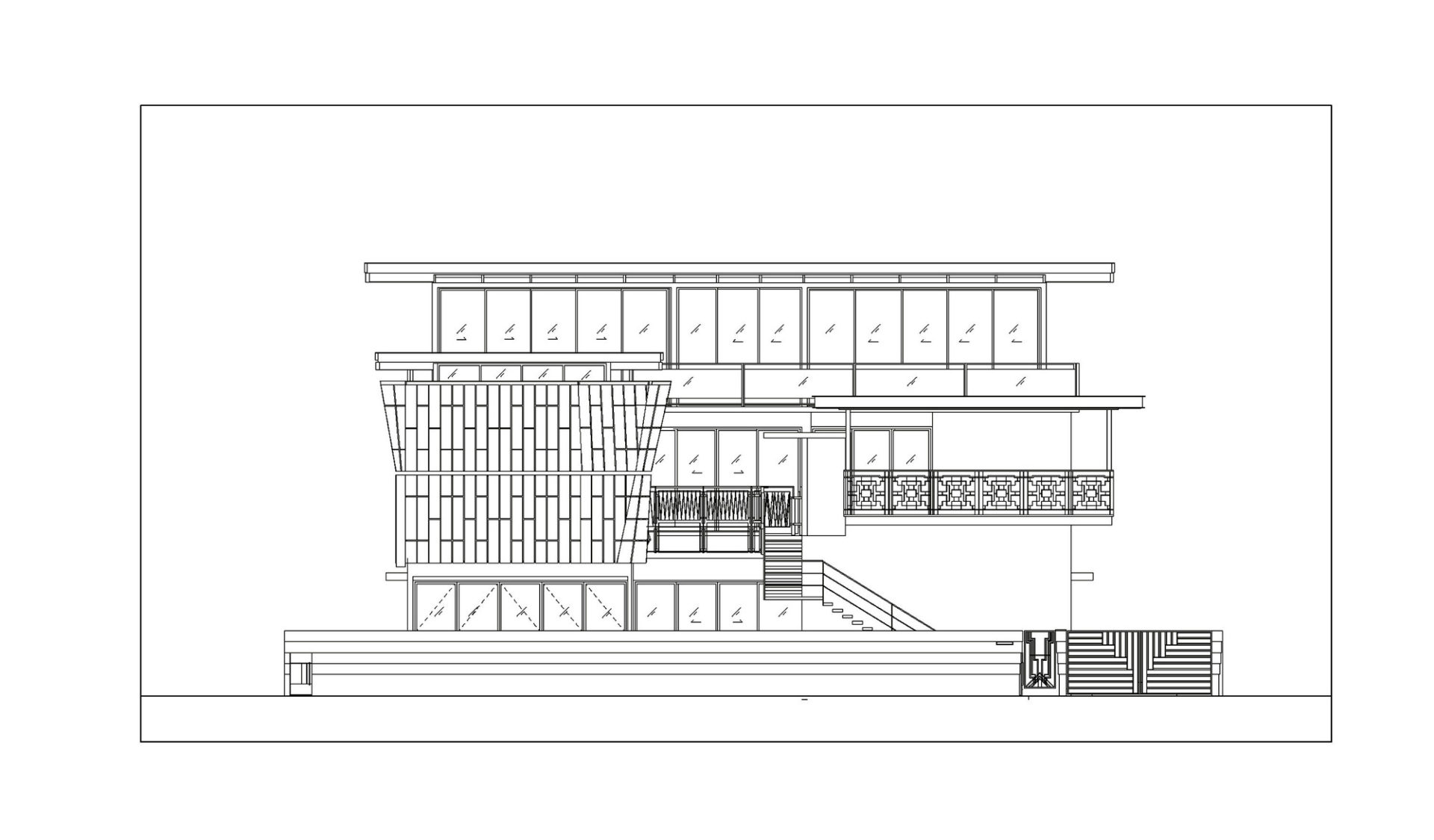 5 Models of Blinds for a Stylish Home

Top 6 Tips When Selling Your House In Dutchess County, NY