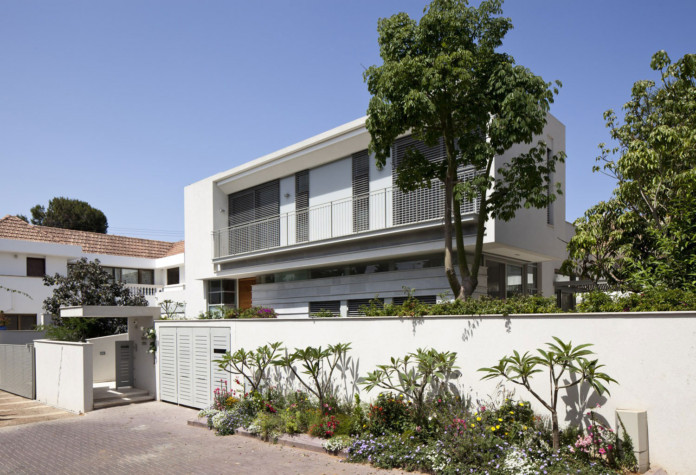 Sketched out by Amitzi Architects and completed in 2011, the Herzeliyya House is located at the extremity of a “dead end” road in Herzliyya, Israel. Even though most of the homes in the neighborhood feature relatively restrained designs, the residence in question stands out and offers great views of its surrounding environment without sacrificing the privacy of its inhabitants. 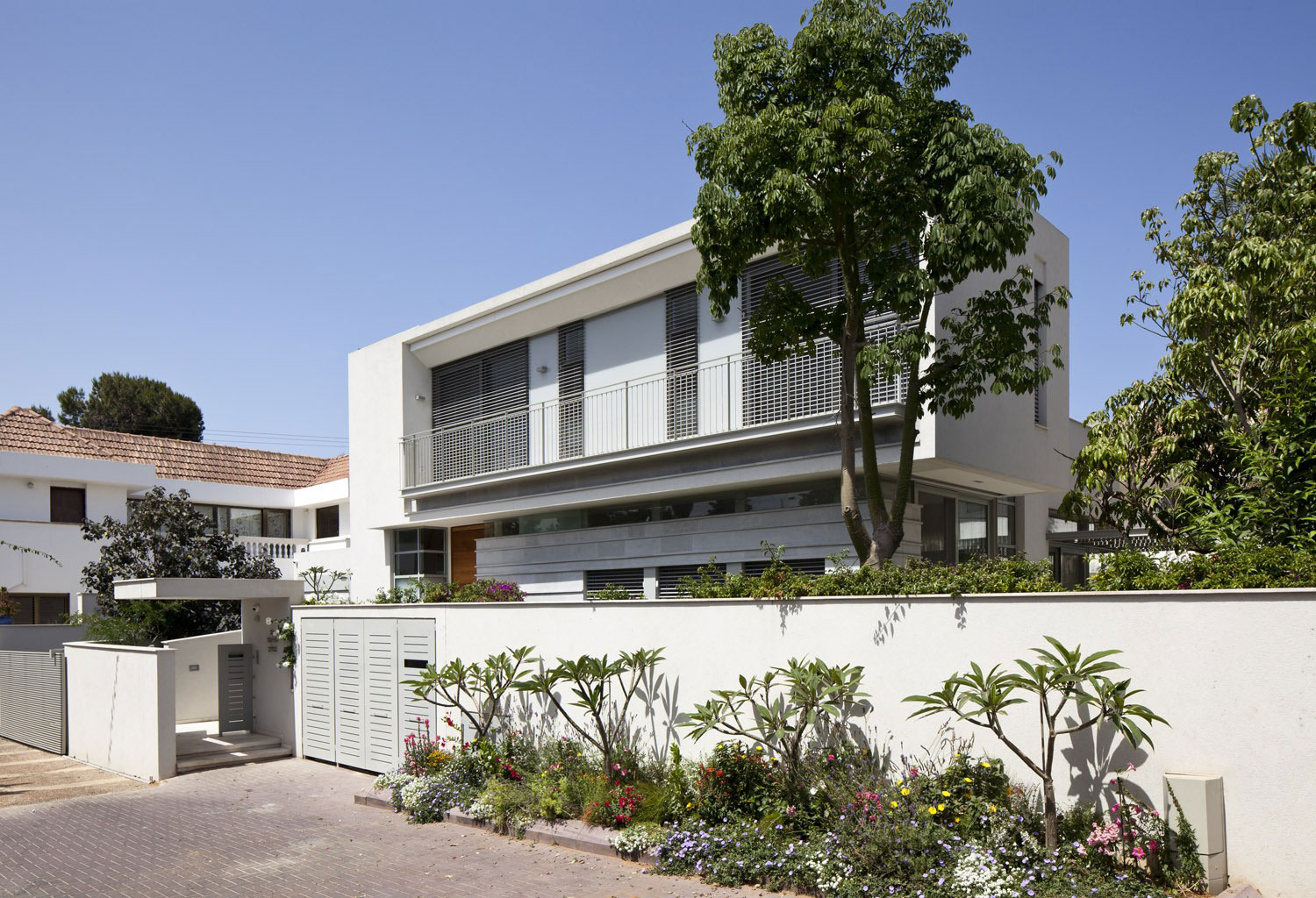 As a buffer between the primary road and the living areas, the architects placed the security room, elevator and parking area at the southern part of the building. Consequently, the bedrooms and the living room benefit from open views towards the west and the north through a series of apertures. On the upper floor, we find the master bedroom as well as the children’s rooms, both of which face a swimming pool and a few beautiful treetops respectively. The two spaces are divided by a double-height area that flaunts a pair of bridges.
Skylights on the northern side of this area welcome natural light and make sure that it reaches the ground floor below. 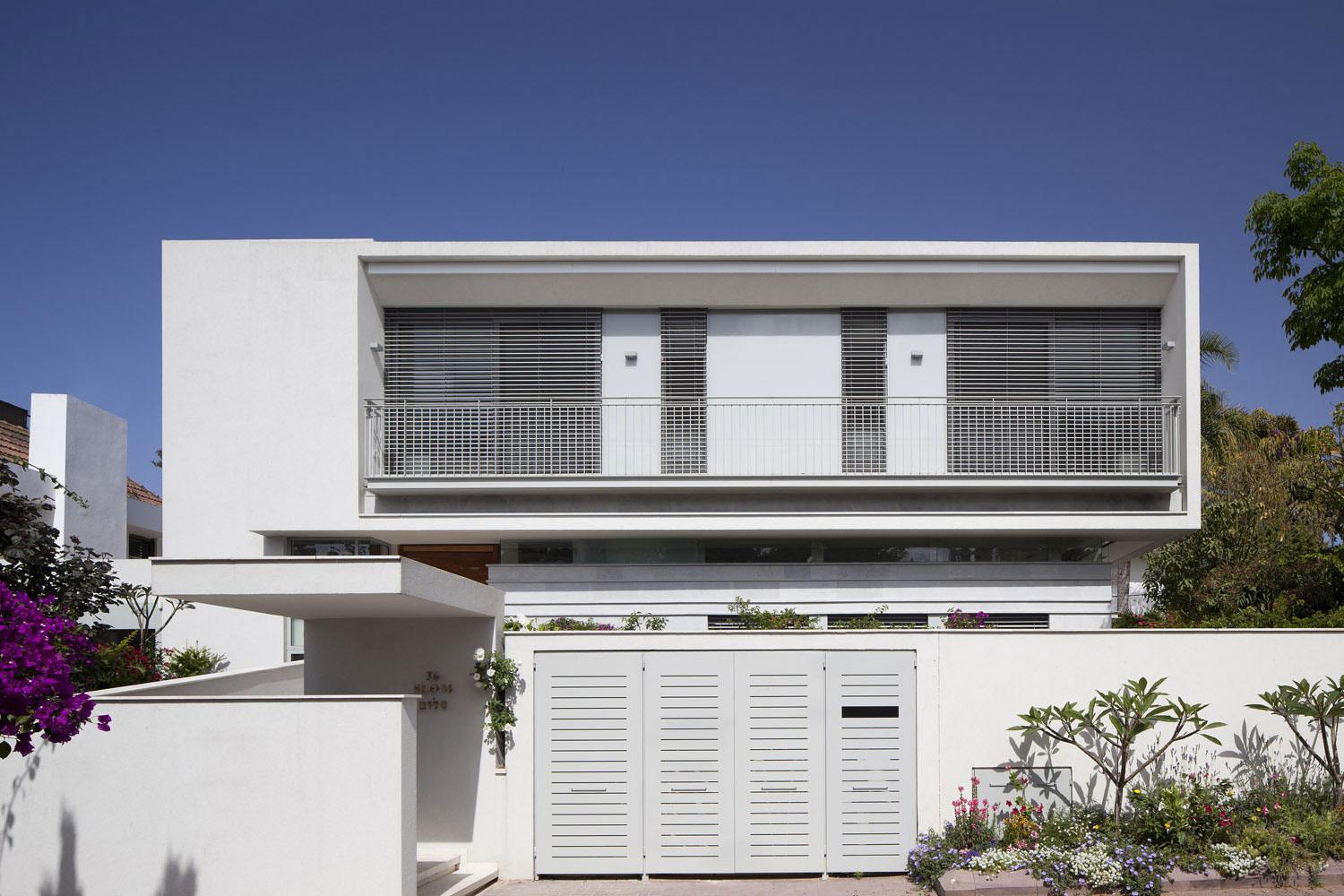 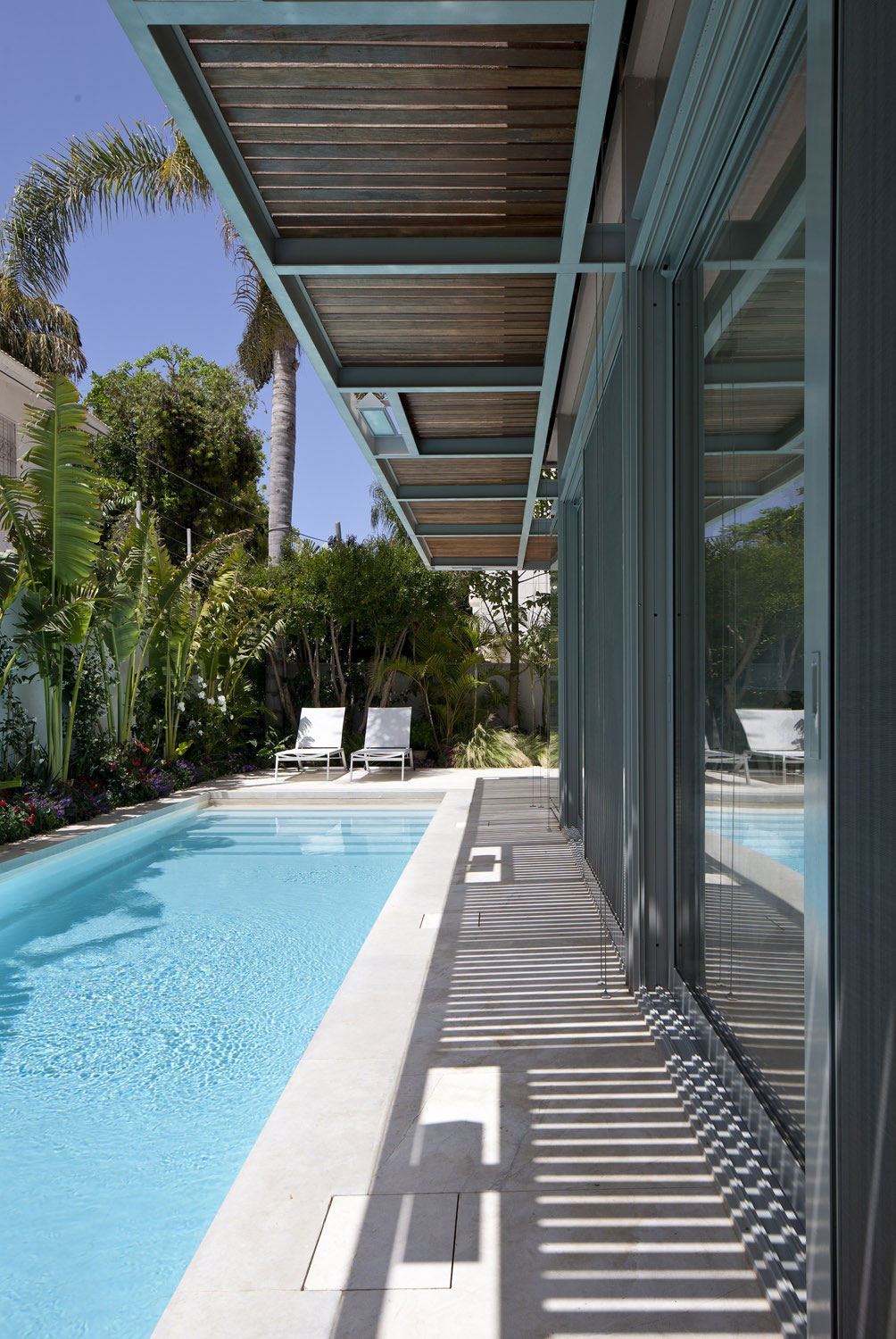 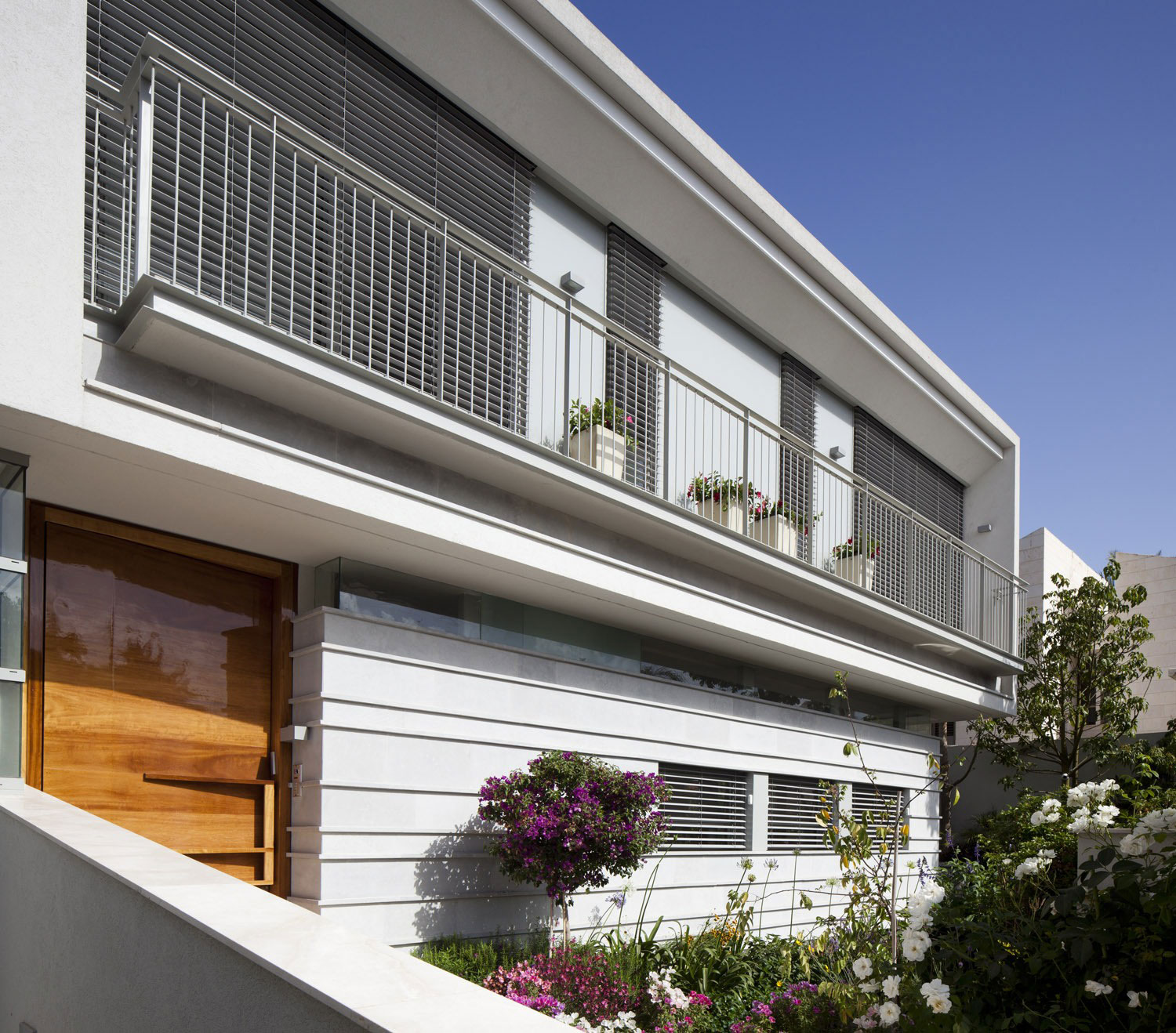 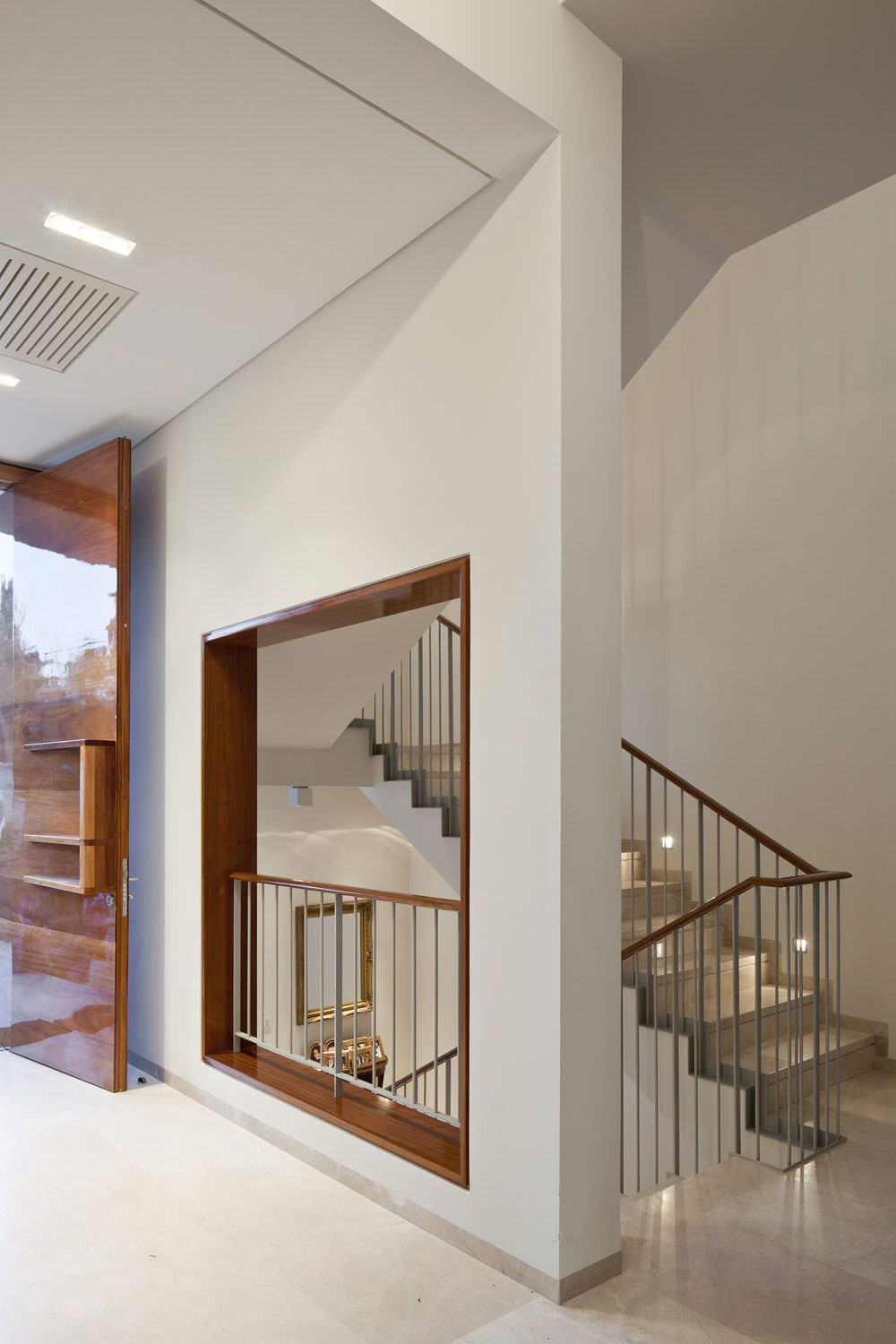 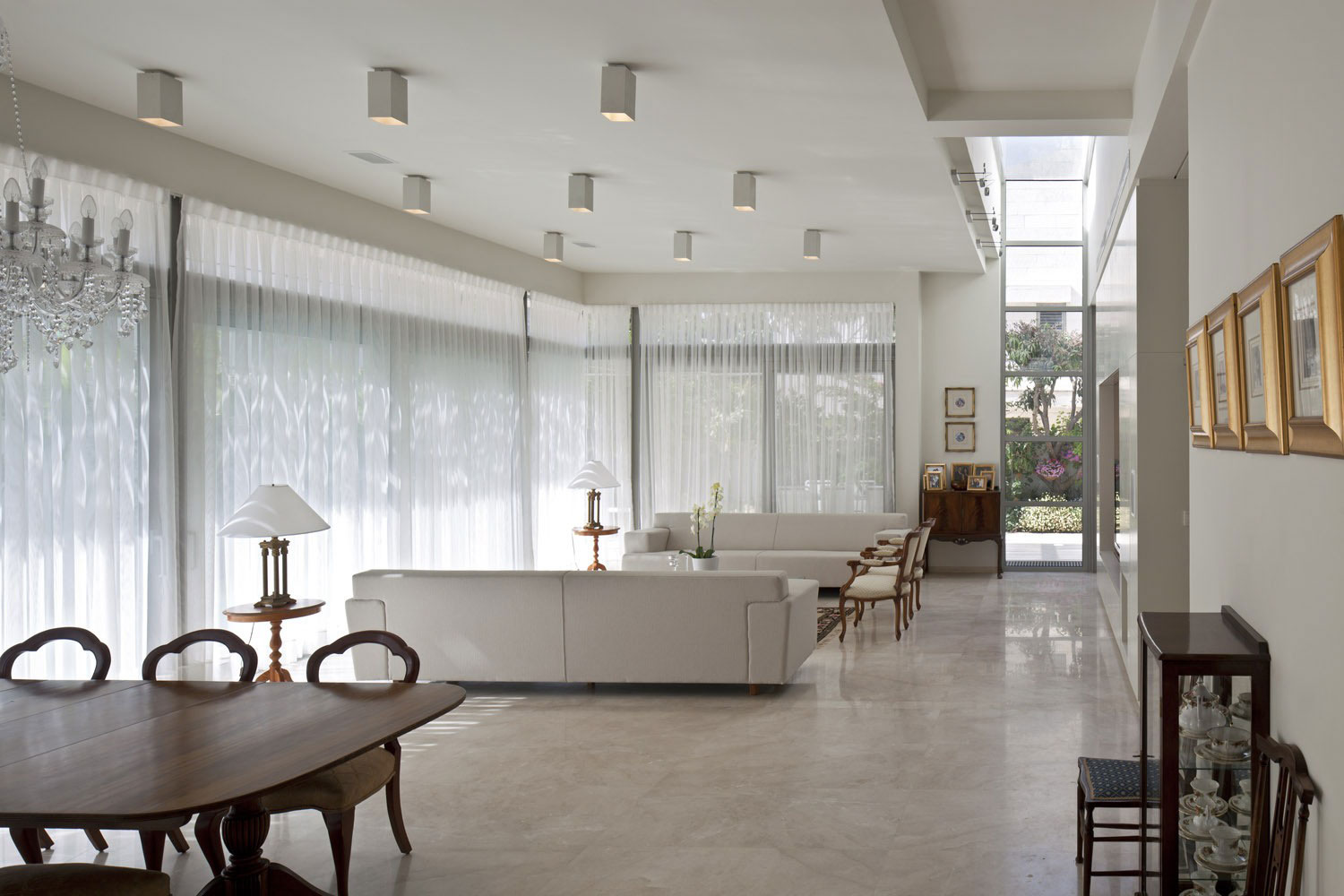 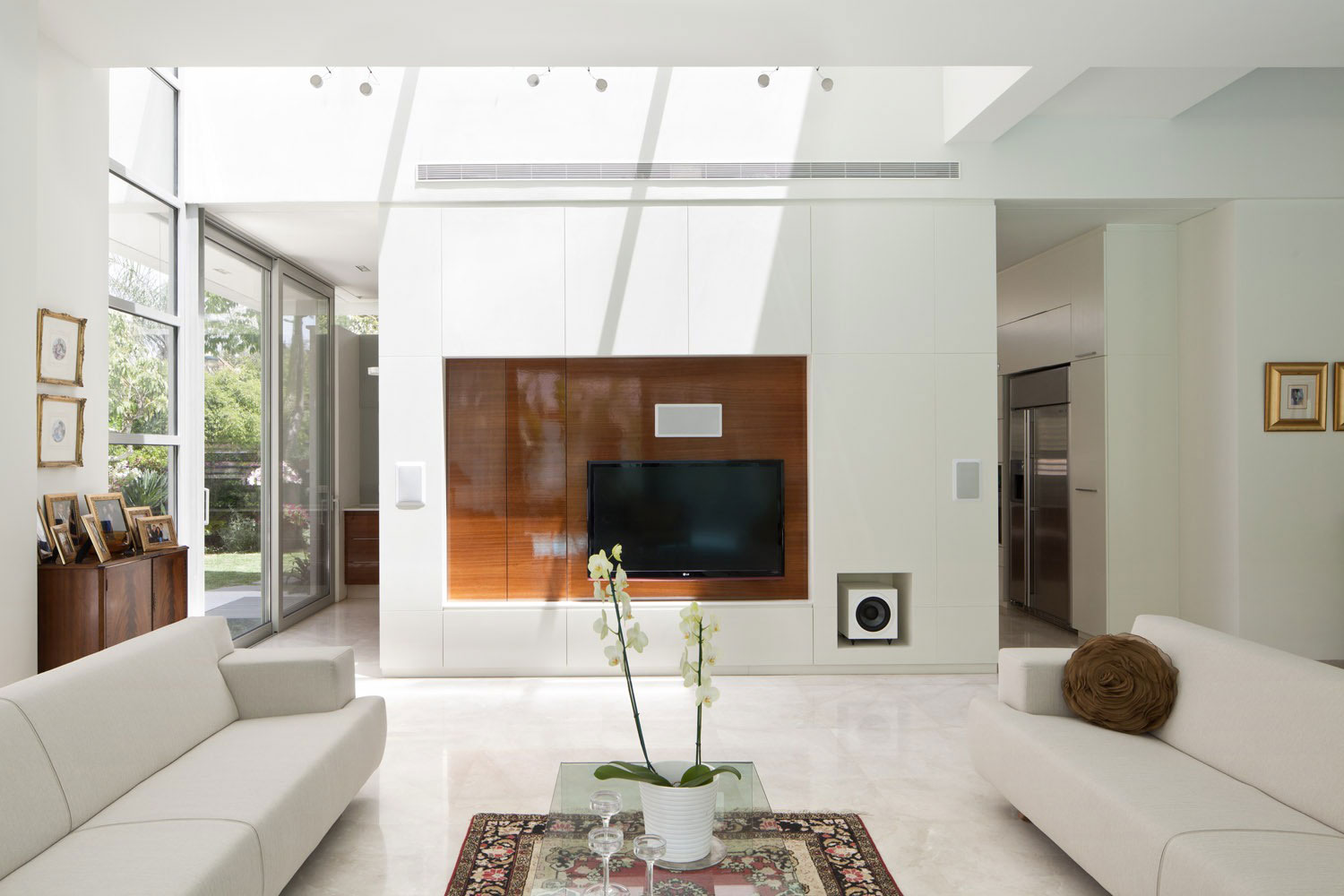 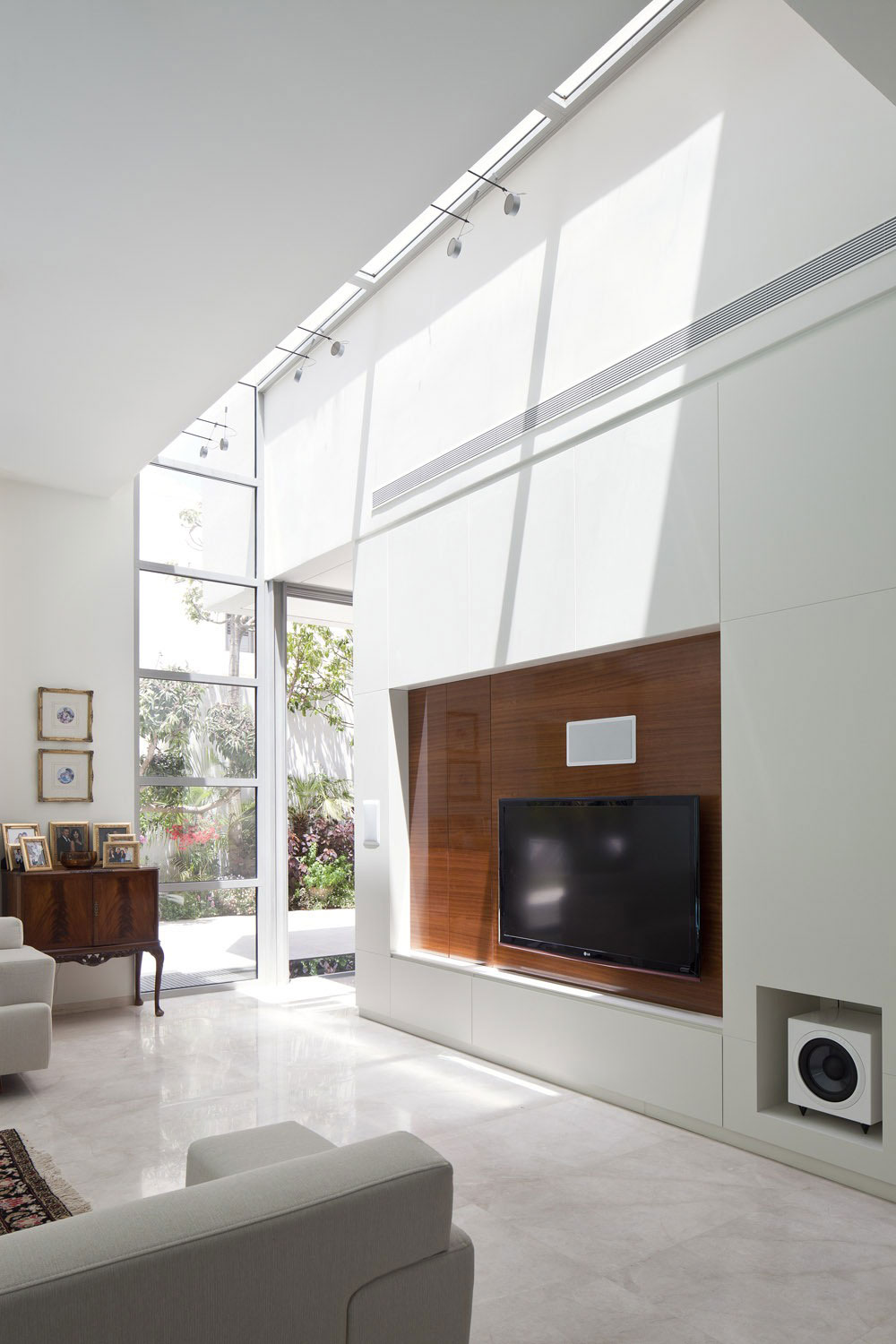 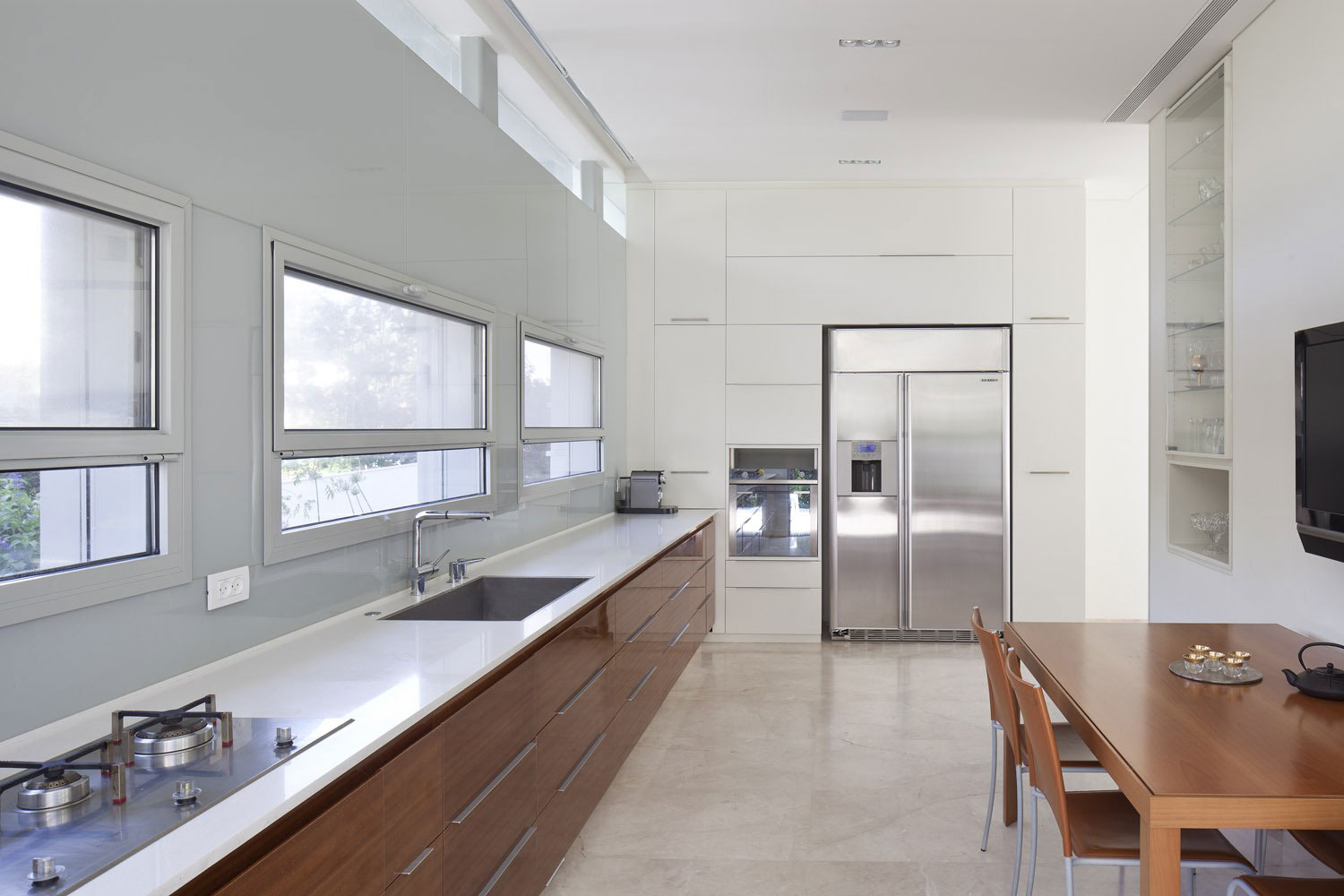 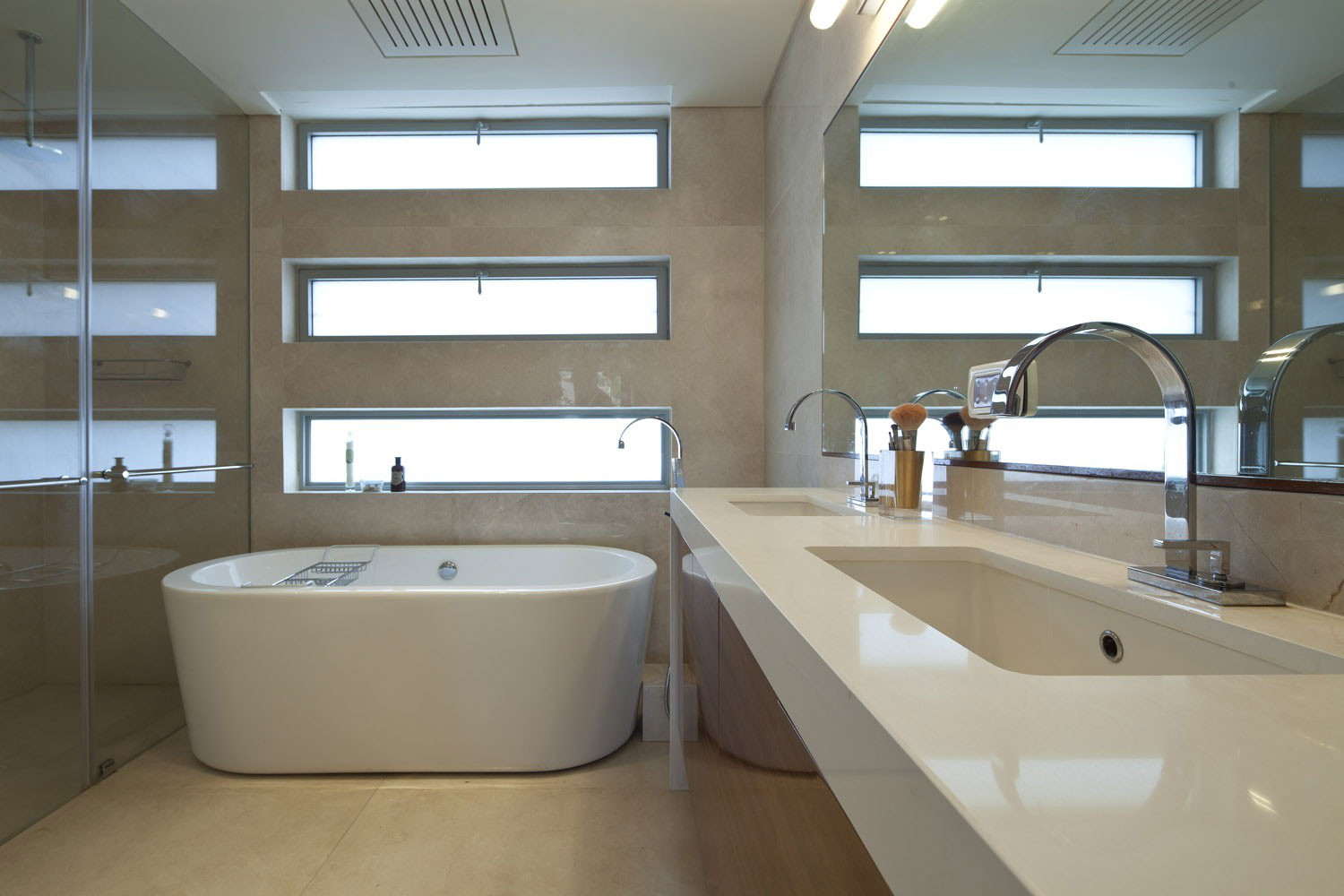 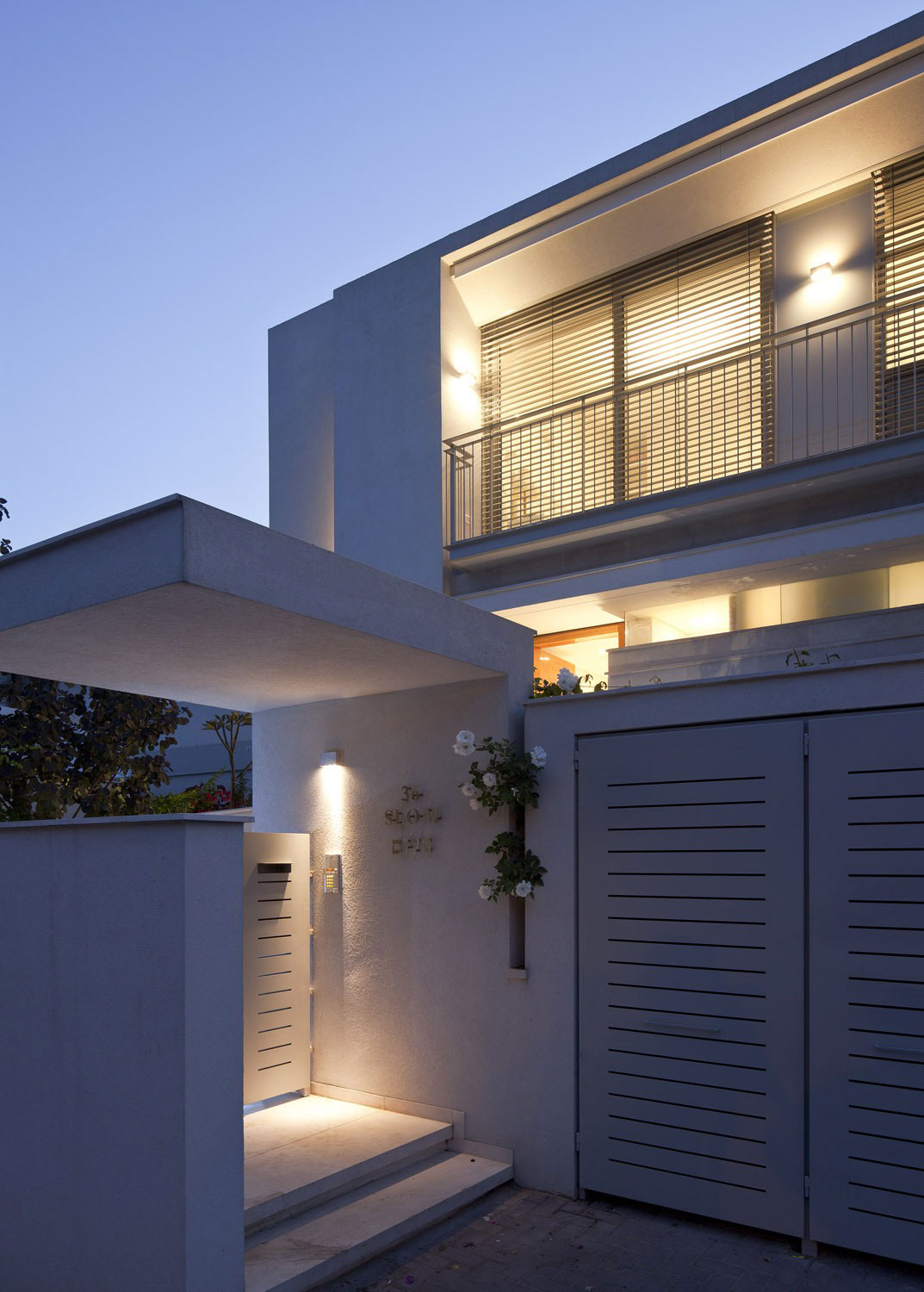 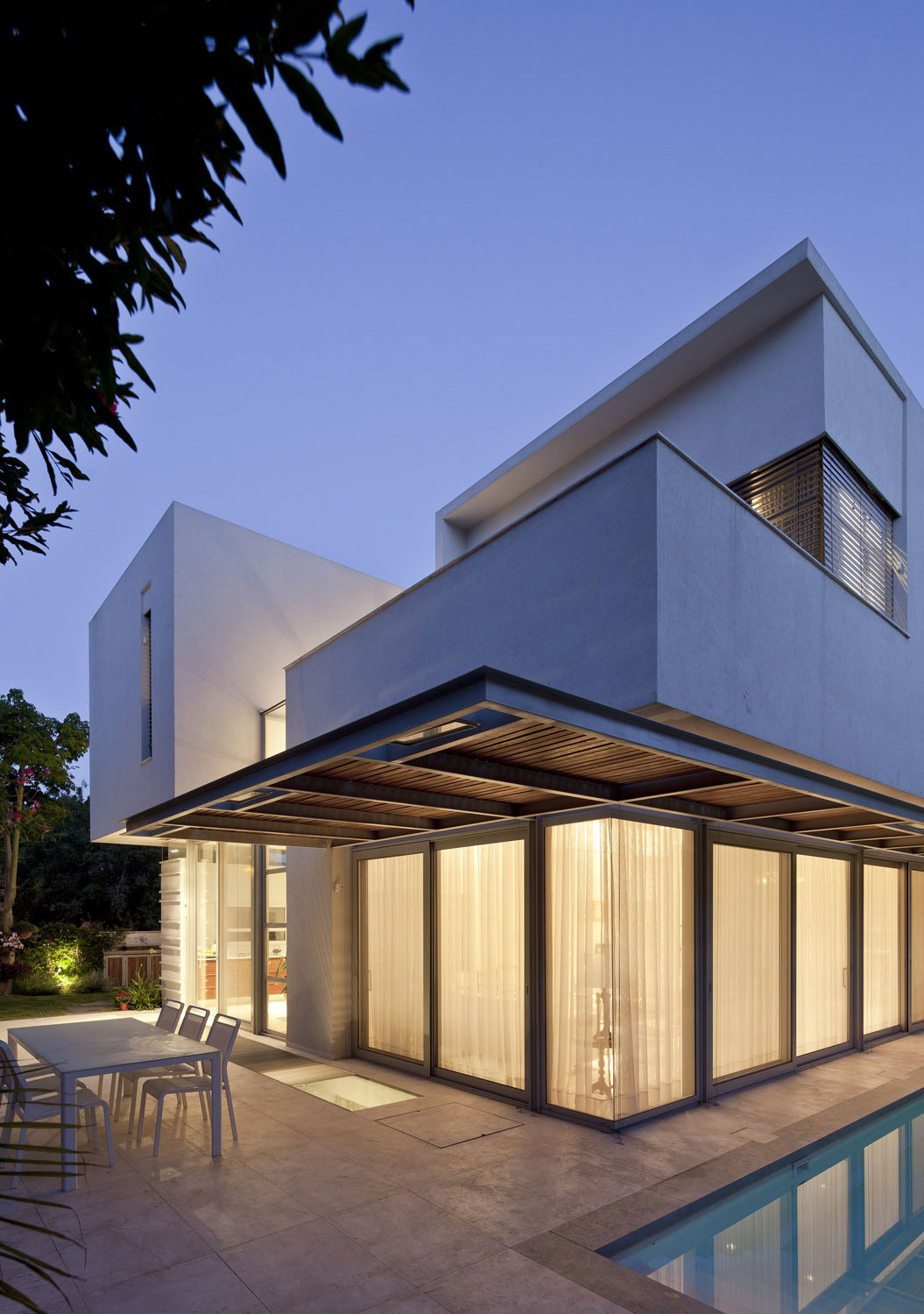 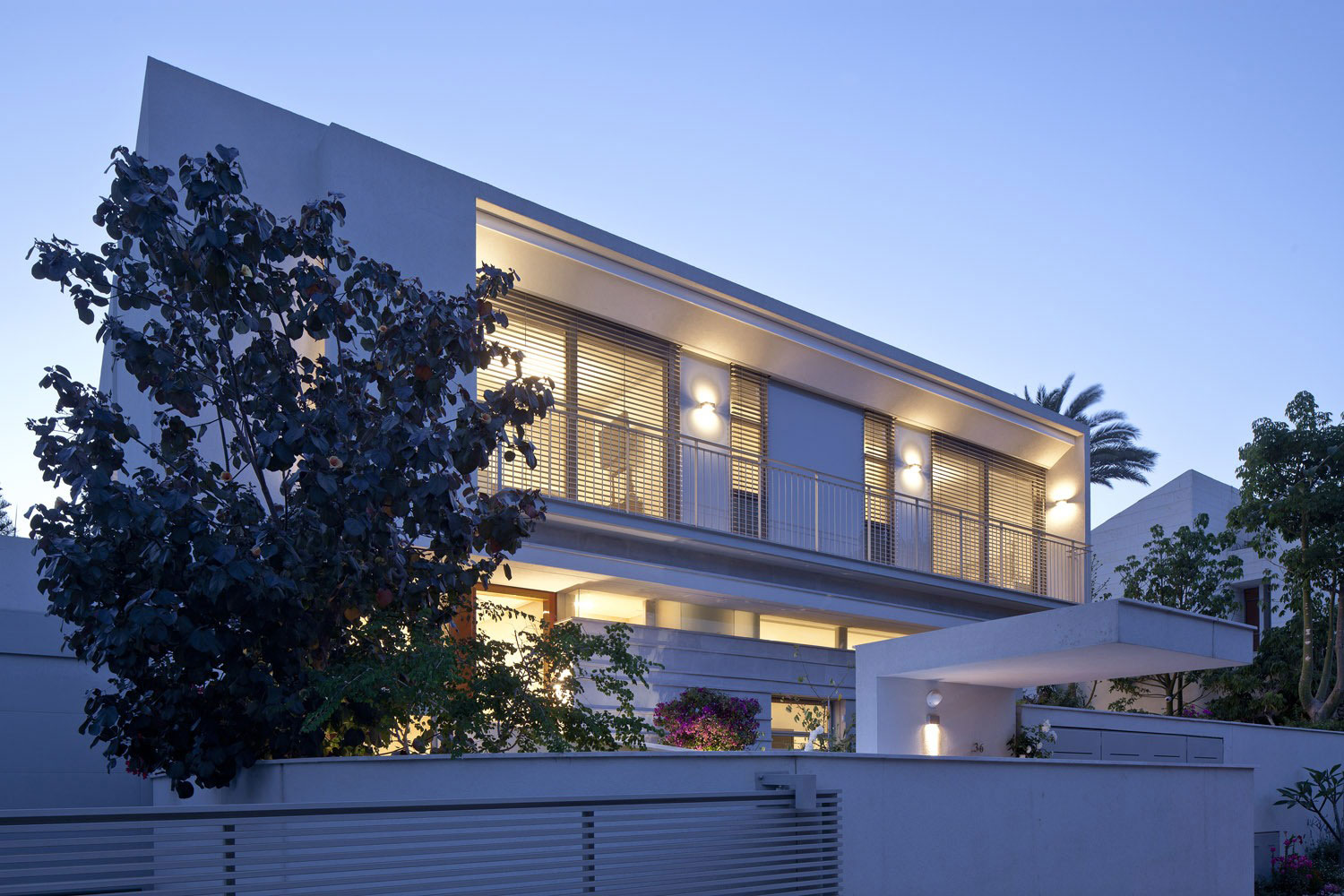 The house was designed for a family with two grown children at the end of a wooded Cul-de-Sac. The neighborhood is dominated by large, introverted houses, but thanks to the unique location of the lot we were able to design a house that can “raise its head” over the wall and look back at its environment without compromising privacy. The house’s layout, orientation and massing acknowledge the sun’s directions and the site’s environmental constraints. Climatic architectural design reduces costs of air-conditioning.

“Heavy” functions such as parking garage, elevator, security room, etc. are lined along the southern edge of the plan and buffer between the living areas and a main road that passes two blocks away. This enables spacious living area and bedrooms with huge north- and west-facing apertures that open to a quiet and shaded garden and swimming pool.

The kitchen faces the street through a ribbon window set in a stone wall. The top floor is divided in two: the master bedroom occupies the western half of the plan and faces the swimming pool, and the children’s rooms on the eastern half face the boulevards’ treetops. The two wings are separated by a double-height space crossed by two bridges. The northern half of this space is a skylight that brings natural light into the depth of the ground floor.

The southern part of this space ascends to a clerestory window in the roof. When open, the clerestory window releases hot air to the roof and generates a natural circulation that allows a flow of cool air from the swimming pool area into the ground floor. 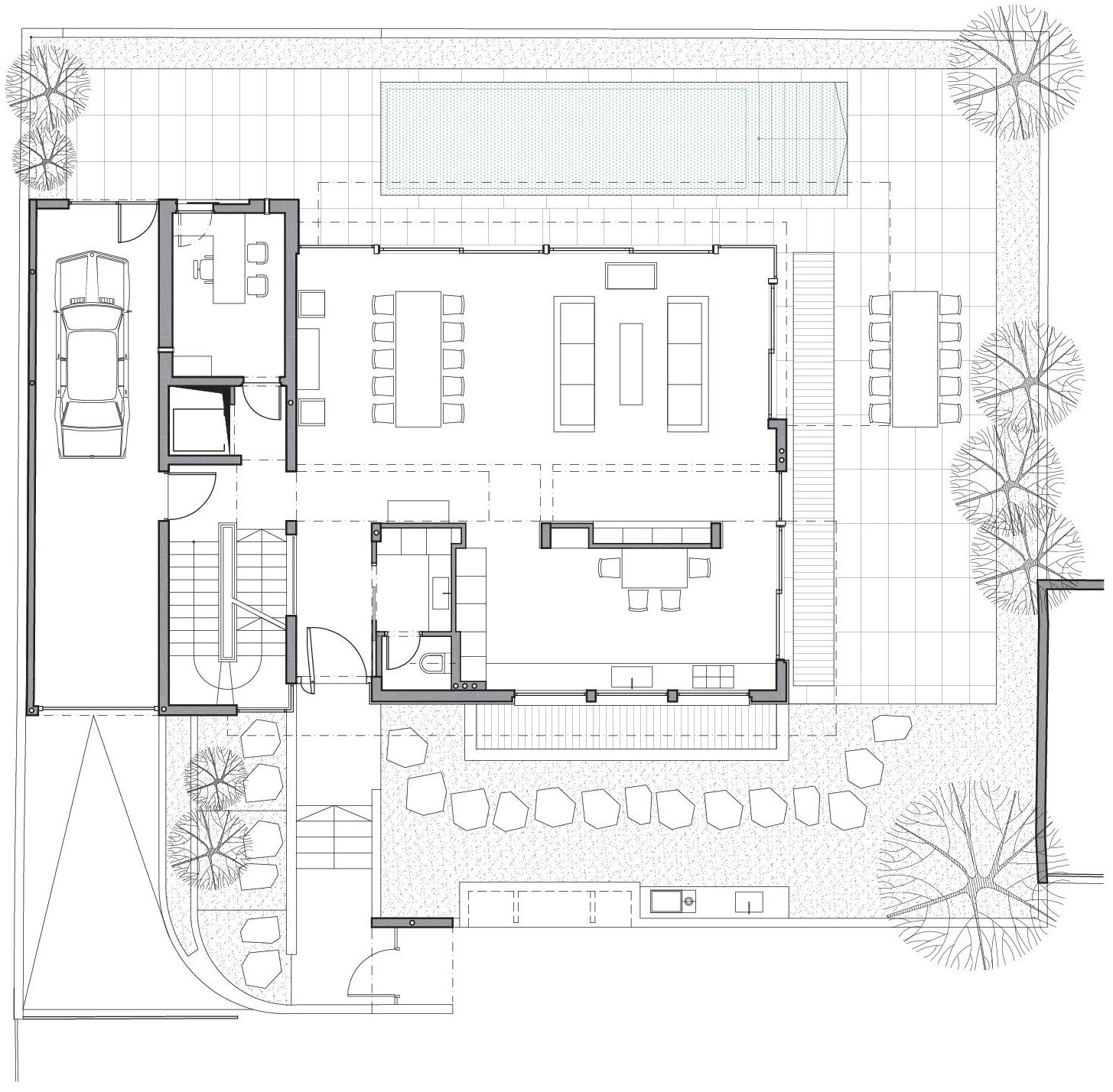 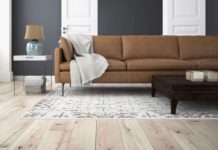 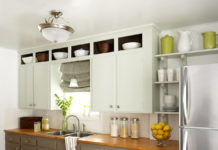 The Cheapest Way to Renovate a Kitchen 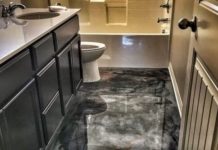 Installing Epoxy Flooring In Bathrooms: Is It A Good Idea?