A shower should be both pleasant and functional. When planning a bathroom, it’s critical to consider the shower’s space requirements. Let’s look at the basic shower proportions and how to customize them for your house.

Shower proportions are more important than you think while taking a shower. Your shower may seem too tiny every time you turn around and bump your elbow. If you like lengthy showers, it may be because you have ample space.

A conventional shower must be 36 inches wide to meet ADA regulations. A 3030 shower is allowed by the International Residential Code and is often used in smaller bathrooms to save space. If space is permitted, a 4836 shower is ideal.

Your shower may be uncomfortable if you knock against walls, but you must consider various aspects. Do you have enough area to stand up, spread your arms, and circle? If you’re unclear how much room you’ll need, physically take a spin in your future shower.

Your walk-in shower measurements rely on a few factors. The first thing to think about is the total square footage of your bathroom. You don’t want your shower to encroach on your bathroom’s usable area (and consequently end up with a watery mess everywhere).

Showers that are too tiny will be uncomfortable for anybody who uses them. When taking a shower, you’ll want to have ample room to move about.

The International Residential Code mandates that a shower’s interior be a minimum of 30 by 30 inches in size. The National Kitchen and Bath Association, on the other hand, recommends a 36-by-36-inch minimum internal shower area. In this case, if your bathroom is on the smaller side, this is the ideal size for you.

It’s also suitable for a single-standing adult at 42 by 60 inches. This shower size is more comfortable since there’s more space to stretch out a little. It’s also a better starting point for a walk-in shower because of its increased usability.

However, if you can find some more room, that would be even better. Shower areas should be 72 by 72 inches minimum if an overspray barrier is not used.

Exactly How Big Should Bathroom Shower Stall Sizes be?

Showers and shower size are likely to conjure up images of a new shower or maybe a renovation of an existing one.

There are several things to keep in mind when deciding on a shower size that will suit your space and satisfy your requirements, regardless of which option is best for you.

Bathroom shower sizes should allow for basic body motions like bending and stretching so that bathing may be enjoyable rather than an arduous task.

When selecting, it’s critical to remember that these measurements are collected from within the shower stall, not outside.

If you’re going to spend the money on a new bathroom, it’s essential to decide wisely and pick a size that won’t annoy you or trouble you while you work on it.

As the name suggests, square showers come in various sizes ranging from 32 to 42 inches wide. A glass enclosure encloses a square shower, often situated in a corner. One-person showers and square showers are two different names for the same thing.

Most rectangle showers are two-person. However, you may construct a rectangular shower along one wall with a glass enclosure. Their dimensions range from 42×34 to 60×48.

The 2010 ADA Standards for Accessible Design propose ADA showers be 36′′ x 36′′. A 60′′x36′′ shower is excellent for char accessibility since it allows for movement. ADA shower bases also have no thresholds for easier access.

Showers are usually built inside bathtubs. The tub opening needed for a tub and shower combination is 60′′ x 30′′ x 72′′.

Shower Size in a Master Bathroom

A Closer Look at a Two-Person Shower

Showers are usually built inside bathtubs. The tub opening needed for a tub and shower combination is 60′′ x 30′′ x 72′′.

Shower Size in a Master Bathroom

A shower curb is required for every shower, single or double—the raised edge at the shower’s bottom. The curb keeps water in the shower and off the bathroom floor.

Consider the shower floor’s slope while determining the curb’s distance. A shower curb should also slope back toward the drain. So no standing water around your shower curb. 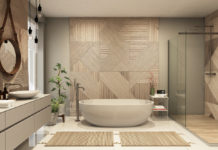 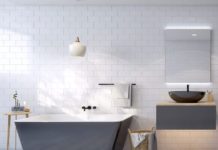 Renovating Your Bathroom on a Budget 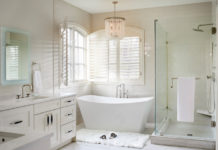 List of Things to Do Before Beginning a Bathroom Remodel

6 Yard Tools Every Homeowner Should Have

How to create Souvenirs in a House built for You?