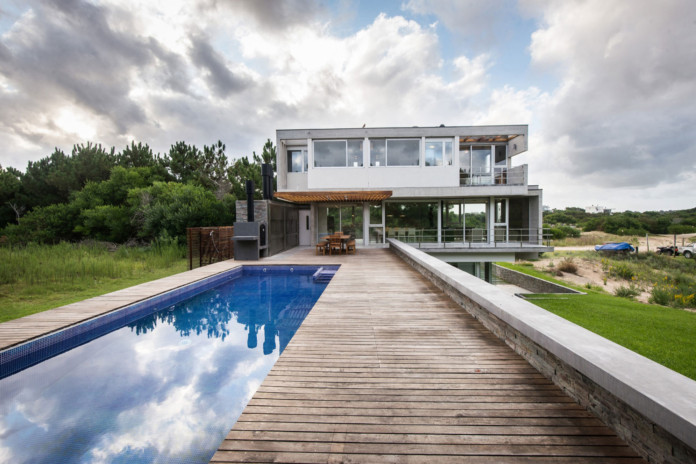 This 2013 project is called KVS House and was completed by the experts of Estudio Galera. Located in La Costa Partido in Buenos Aires, Argentina, this luxurious and modern abode impresses with exceptional living conditions and a remarkable, contemporary design that allows it to stand out effortlessly among its peers.

At a glance, one of the most distinguishable features of this unique home is based on a series of exposed concrete elements, which give off a sense of modernism, sturdiness and reliability. The multiple glass elements that were used in the construction process guarantee utmost transparency and a seamless flow of natural light within the main living areas, but it also ensures that the inhabitants would always be able to enjoy the remarkable views of the surrounding environment.

Speaking of the environment, it’s worth noting that the home was built on a prime location, surrounded by forests and other forms of natural vegetation. As far as entertainment and relaxation are concerned, the KVS House features a series of wooden patios as well as a large swimming pool and special barbecuing areas that encourage socialization and leisure.

Inside, the home impresses with an endless array of amenities and outstanding lighting arrangements complemented by inviting and comfortable seating arrangements, large beds, generous dining tables and state-of-the-art appliances. 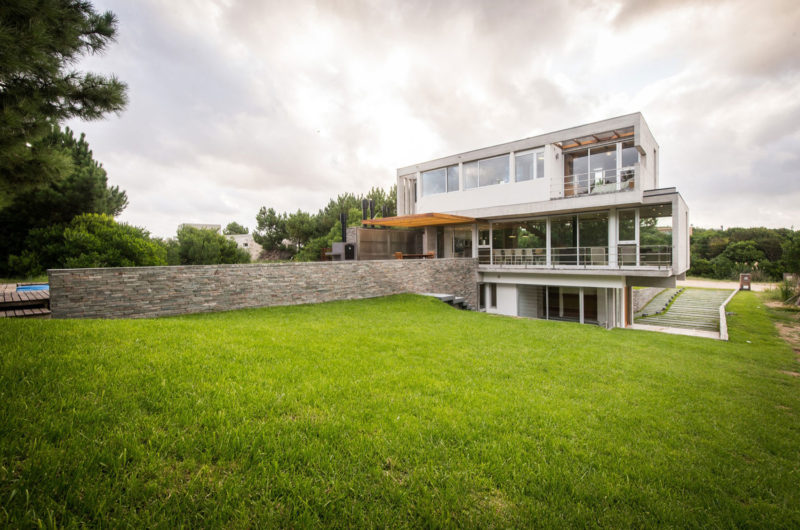 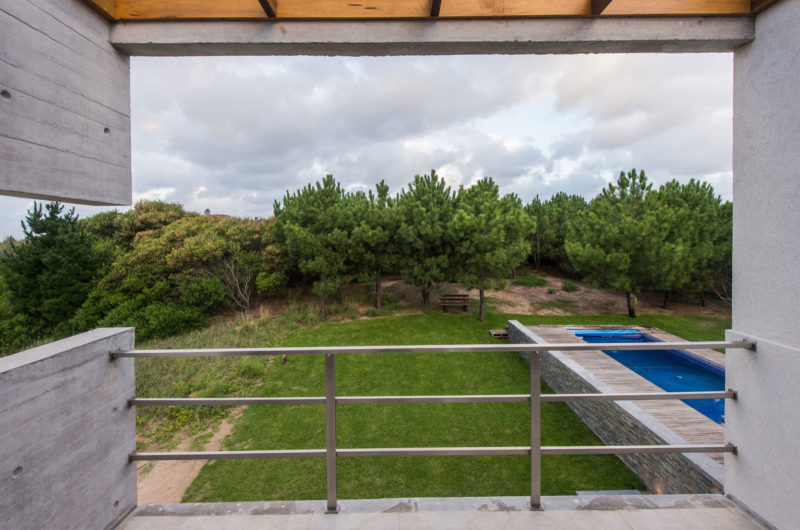 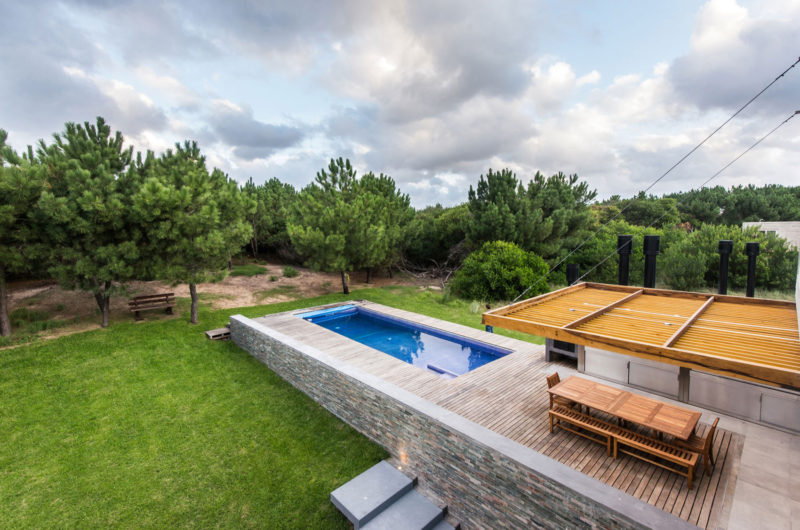 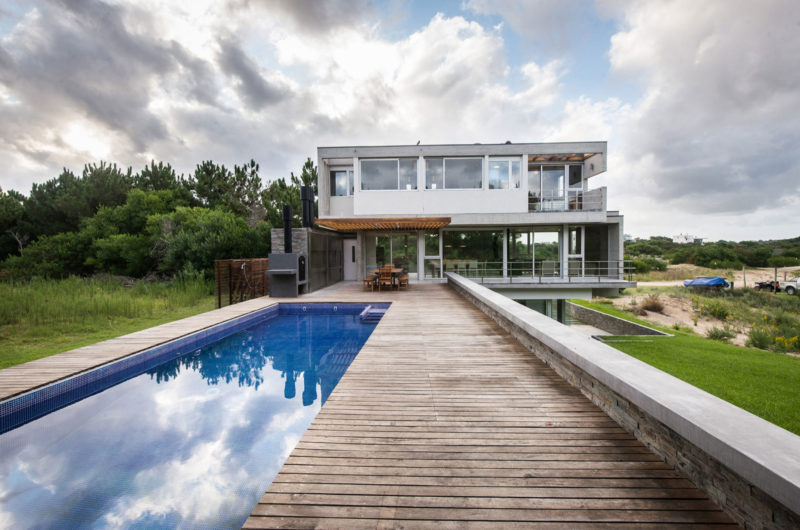 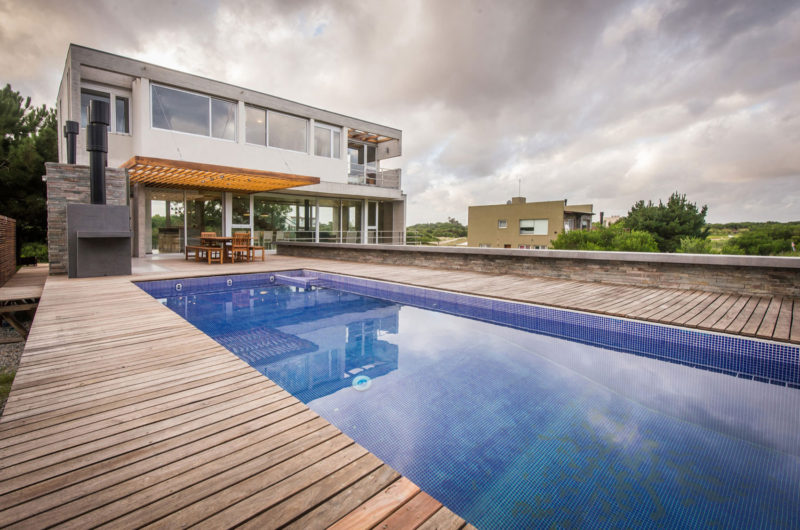 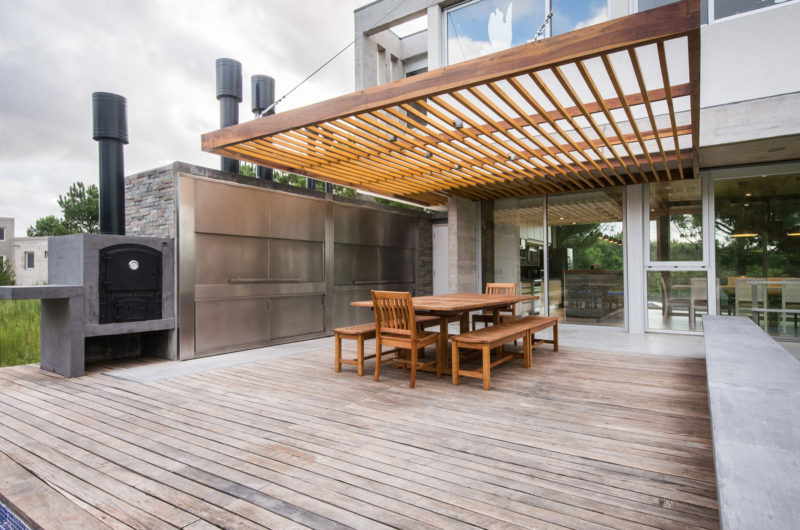 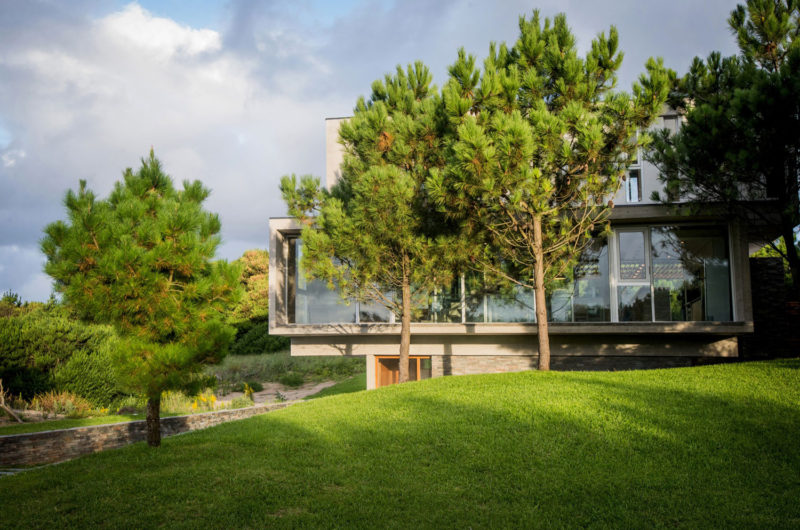 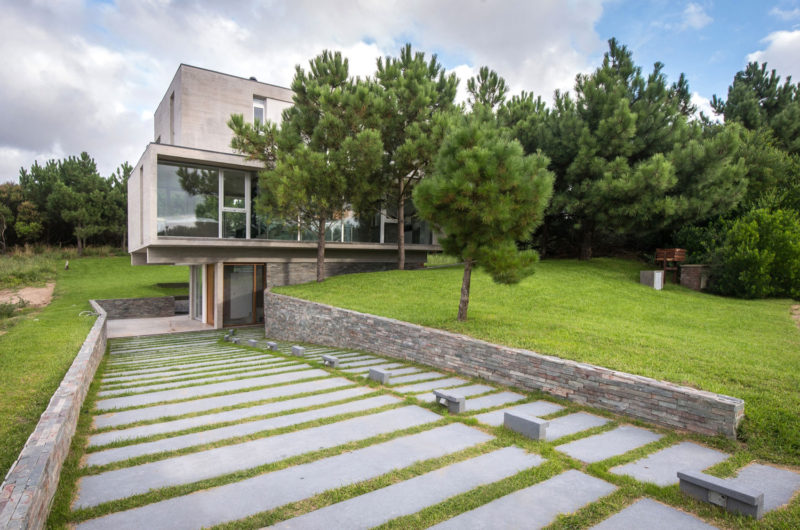 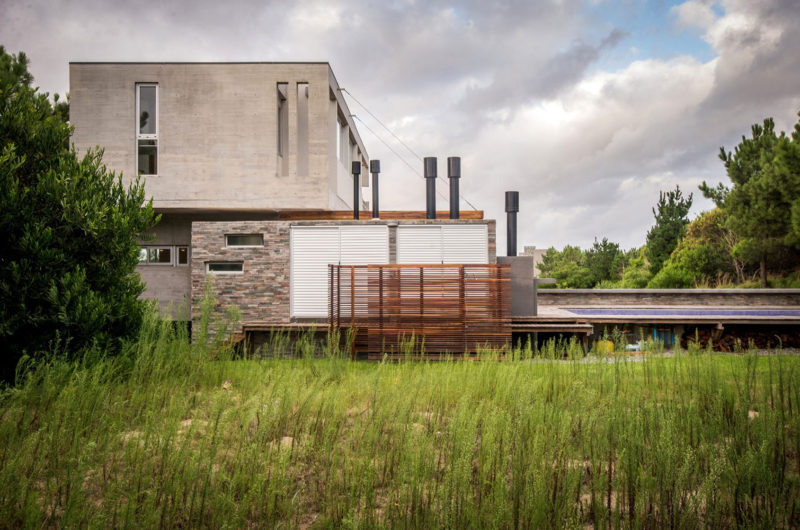 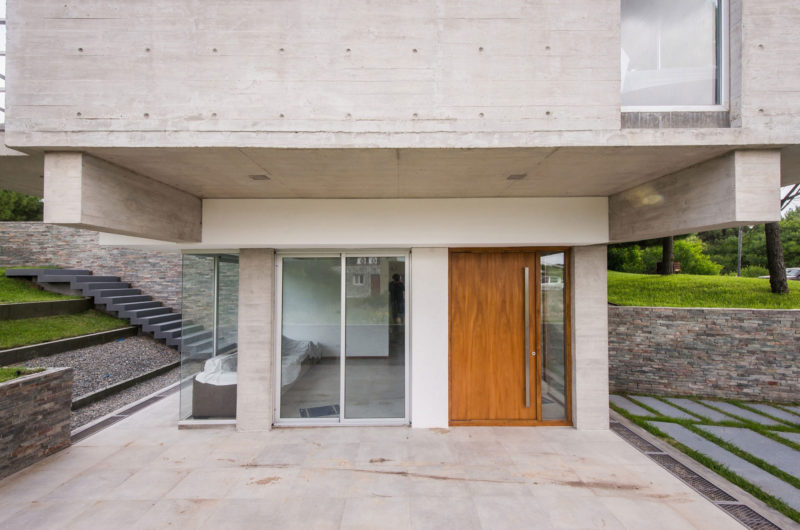 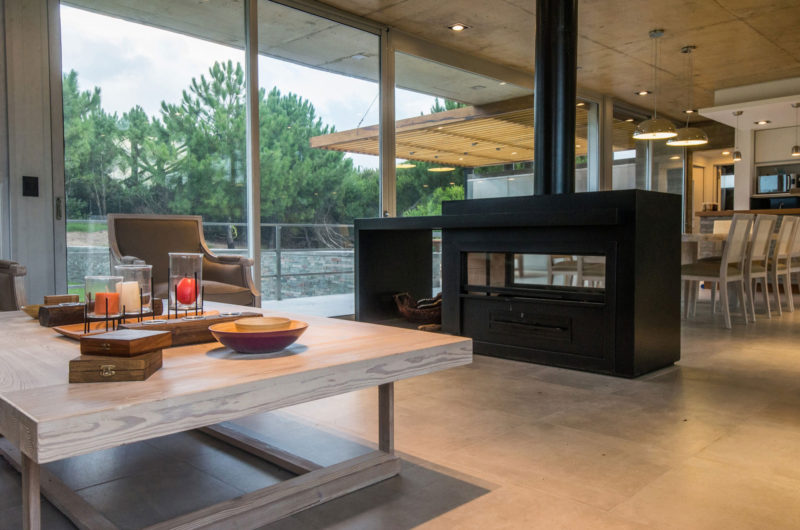 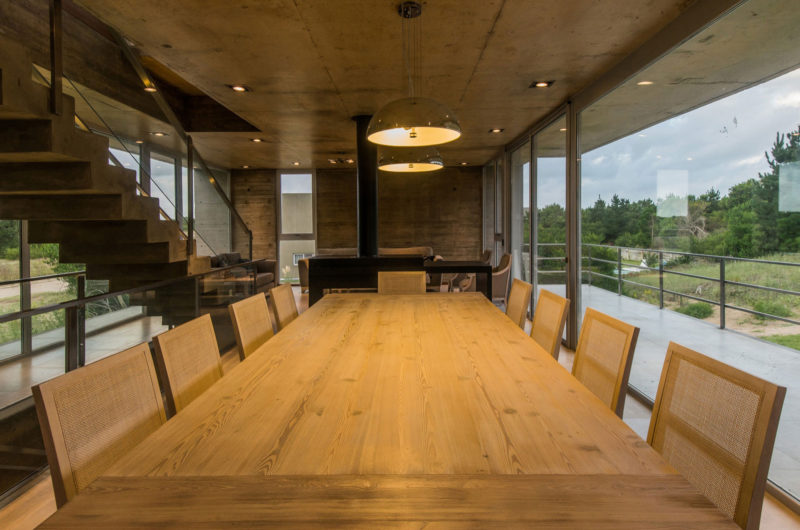 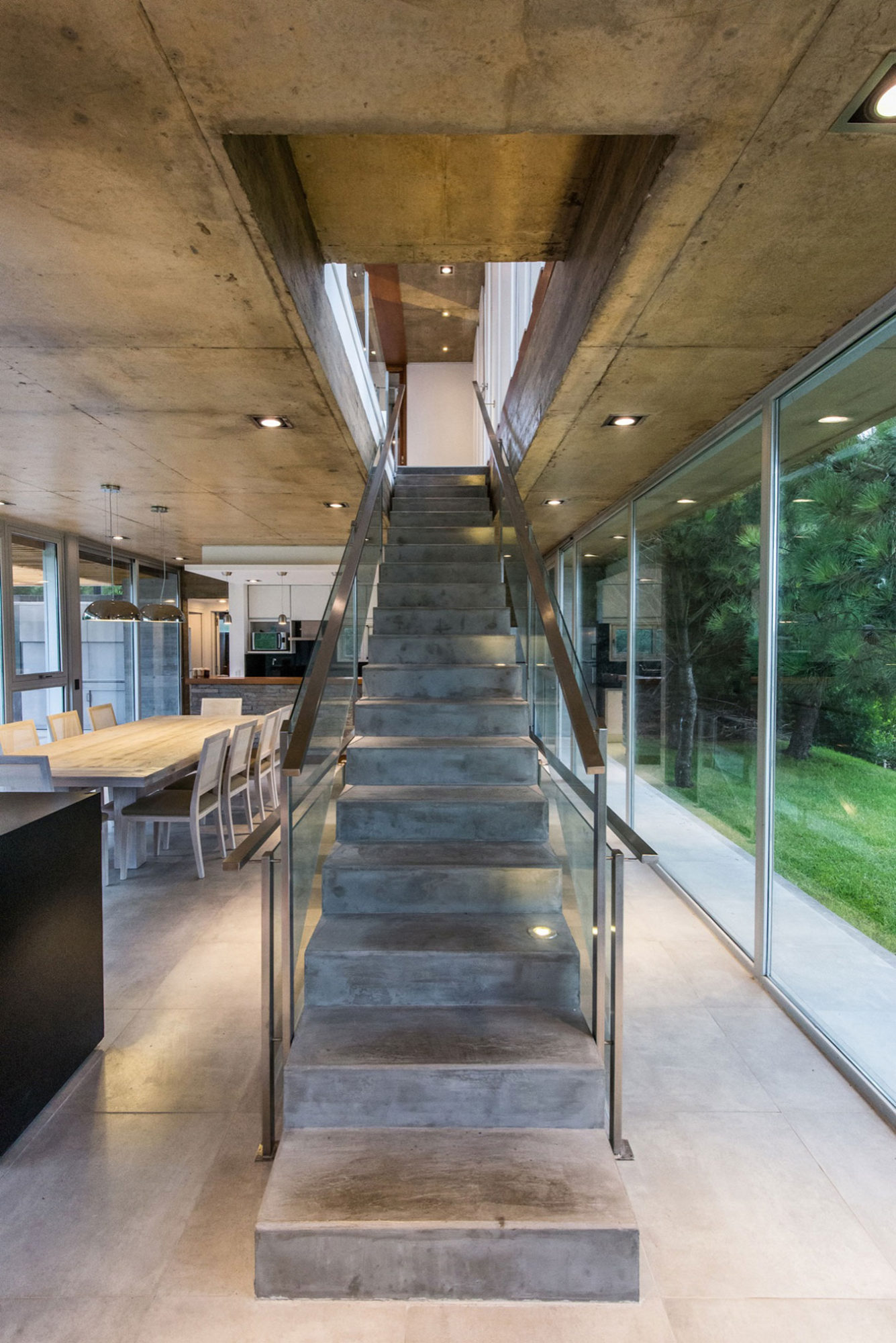 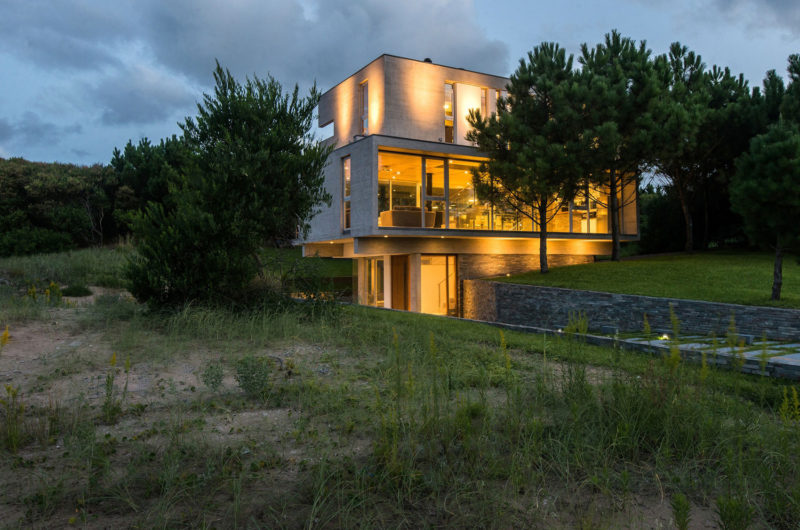 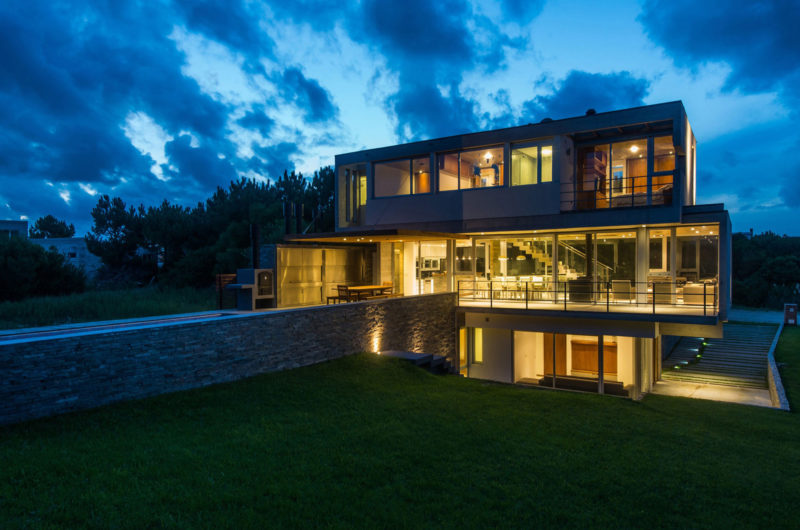 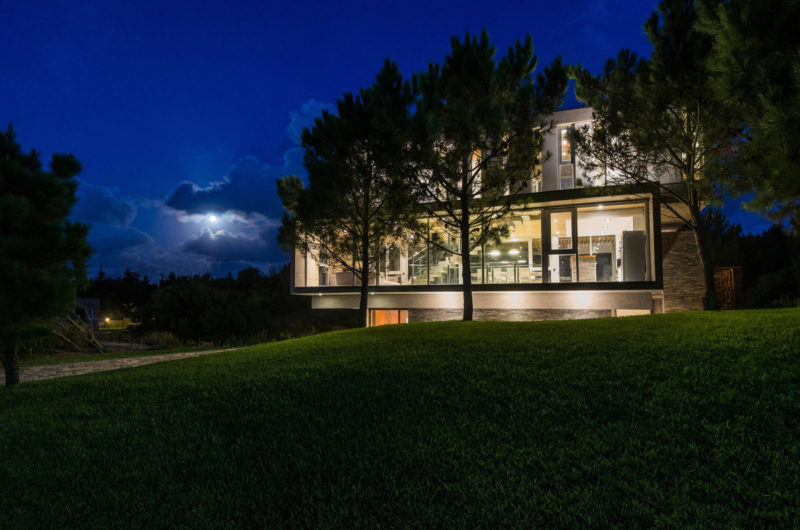 From the Estudio Galera:

The lot is situated in Costa Esmeralda, a new private venture in Costa County. A small pine grove at the front of the site, and a steep slope down from the street to the back of the lot. A simple but paramount commission: to focus the program on the smallest portion of the lot as possible, since most of the natural landscape of the lot wants to be preserved. A vacation home thought for a family that wants to use the house for a variety of purposes, such as getting together and enjoying open air activities.

The program is centered around two boxes stacked, skewed, balancing each other on top of a half buried stone plinth. As a result, the program takes less than twelve percent of the lot, leaving enough space for a swimming pool and a green dune –part of the landscape.

The activities were distributed according to the users’ needs. In the partially buried plinth, we find the main entrance to the house, a bedroom, a bathroom, a laundry room and the playroom which opens to the rear façade directly connecting the inside with the outside. The walls which separate the playroom from the access circulation do not touch the ceiling; as a result, the sun brings natural light into this level which is partially underground.

Upstairs, overhanging over the building site, there is the social box: a concrete box open at it lengths and supported on its ends. Forest views at its front façade, and a garden which dissolves into the acacias trees at the rear façade. Kitchen, dining room and living room open to the exterior to integrate with the deck, the swimming pool, and the garden.

An interior-exterior volume contains the service area, a barbecue grill, machines room, and a toilette. This wedge-shape volume protects the barbecue grill and outside gathering area from the southern winds. A wooden pergola contains the space and offers protection from the sun. The upper floor shelters three bedrooms, two bathrooms, and offers views of the forest.

The boxes are displaced, extending the general volume of the house to the maximum allowed by the side setbacks; thus, generating a semi-covered garage, protecting the ground floor and creating spaces where shades mutate permanently.

These volumes were placed according to the functional requirements of the program and the structural needs –not quite rational in this case, since the structural loads travel the longest distance before resting on the bases. The boxes balance each other and a one-meter-tall wall is the only visible support in the living room floor. The structure is in full view: concrete walls, slabs and four longitudinal beams. Two laid-upon boxes resting on a stone plinth.

As regards to the materials, the house is defined as two exposed concrete boxes form worked with 1” planks for concrete walls and beams, and laminated plywood for the slabs.

The harshness of the climate in the Argentine coast, forces us to think of different ways to lessen the thermal and hygrothermal transmittance of concrete.

An air chamber with a subsequent interior hollow brick veneer or plasterboard coating was dismissed. Furthermore, the concrete had to be seen from the inside as well as from the outside, so we decided to pour the walls while leaving a high density expanded polystyrene core, thus choosing the easiest and cheapest way of insulating. The concrete pouring of the walls was done at once, with the expanded polystyrene sheets within them, keeping them in place, and adding to the structure.

The fenestrations are made of aluminum with a double glazed air chamber. The contact between the house and the natural lot is established through an isolated stone veneered wall. The materials were chosen for their nobility, good ageing and durability. 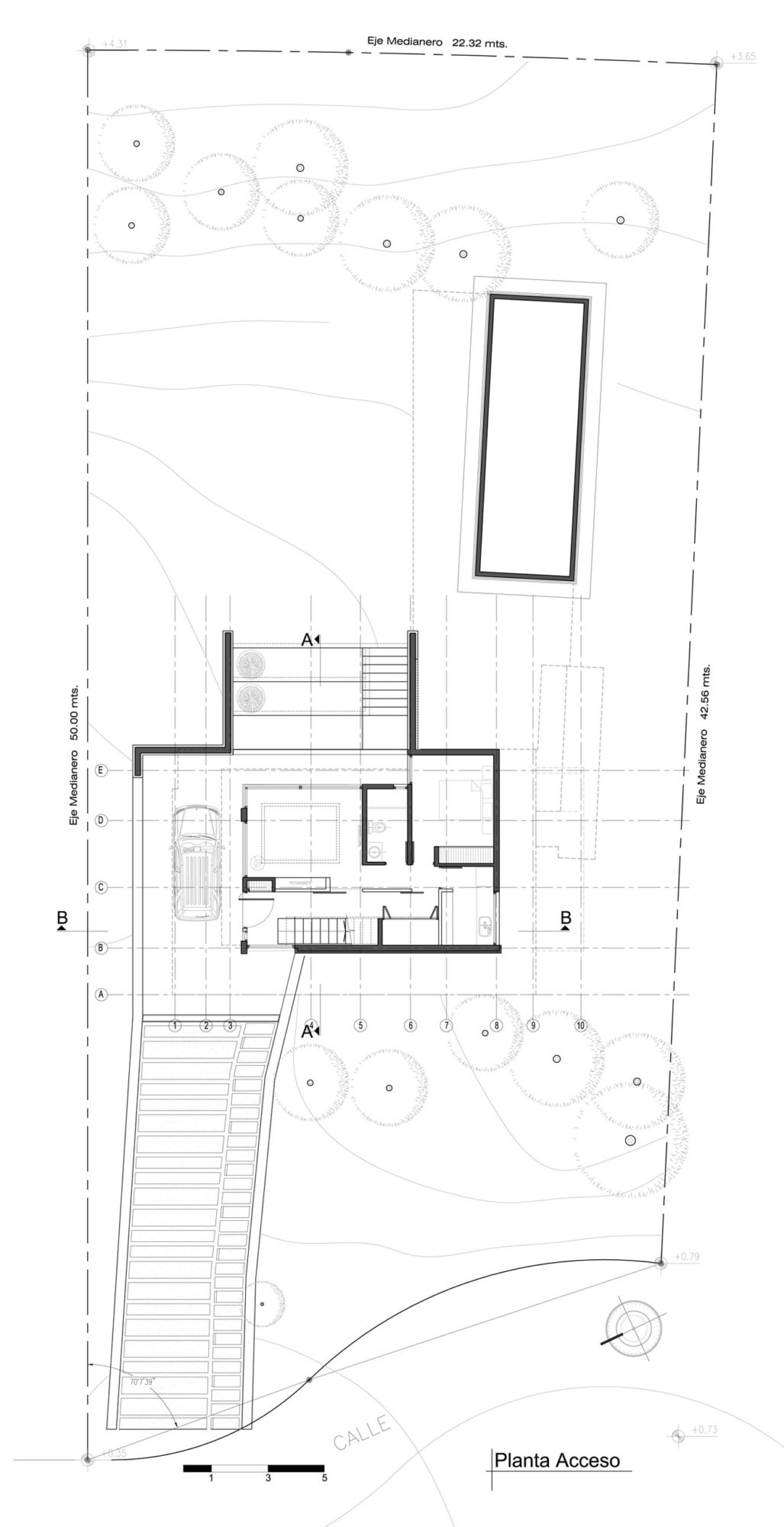 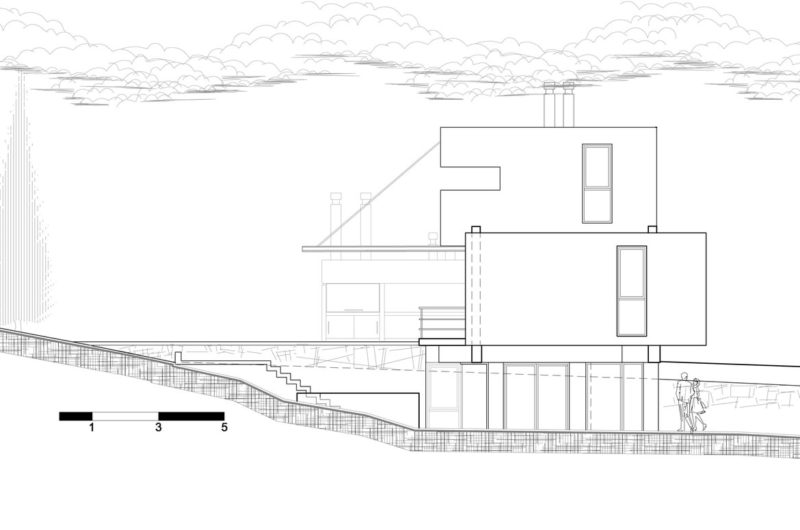 House Set On The Valley Floor In California, USA