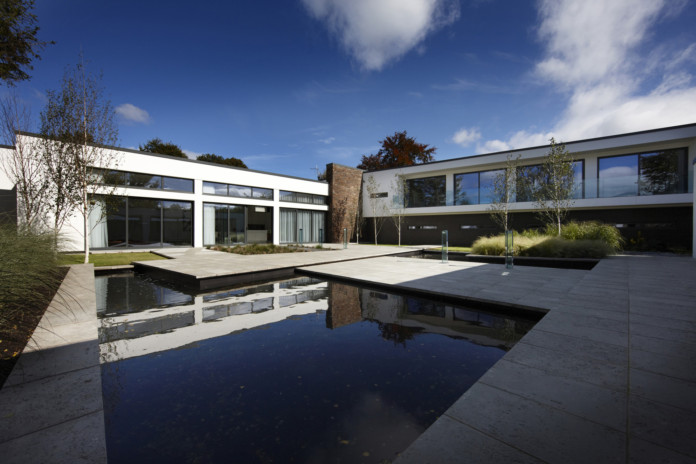 Regent Road is a contemporary residence that was designed by Architecture:m and was built in 2014 in Bolton, UK. It offers spacious and comfortable social living areas as well as more intimate spaces for each residing family member, which makes it a perfect private retreat. The social and private areas are separated efficiently thanks to the two main wings that make up the house. 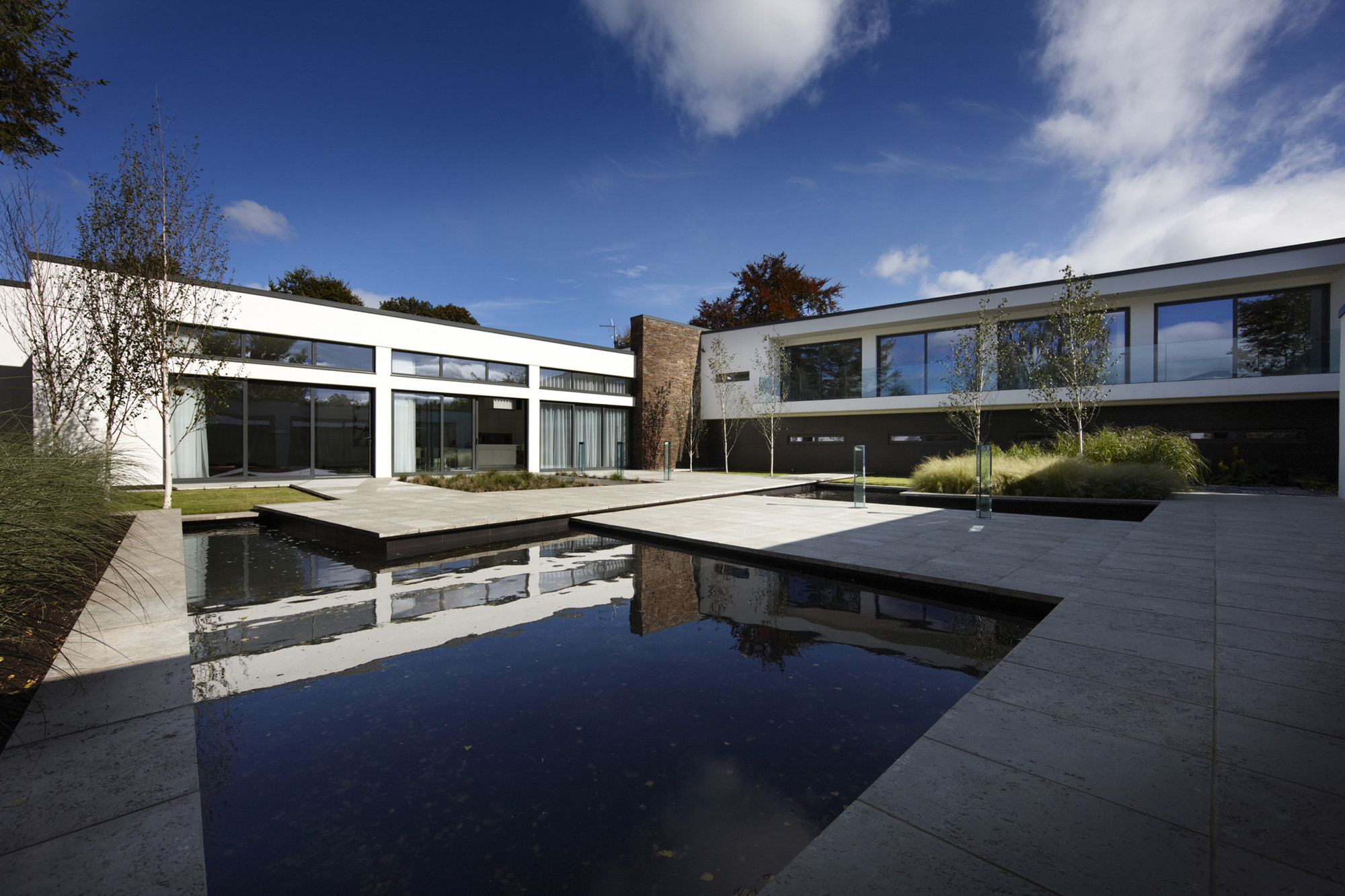 One wing houses the communal and living spaces, while the other comprises the bedrooms and other private areas. The open plan living areas were inspired in their design by the acclaimed Californian Pacific Modern style that was so popular in the 1950s, but with a modern twist. The main challenge when building this house was to make it resilient against the rapidly changing weather conditions of Britain. Even though the weather was very unwelcoming during the construction process, the use of insulated concrete formwork guaranteed that the superstructure could be poured seamlessly. 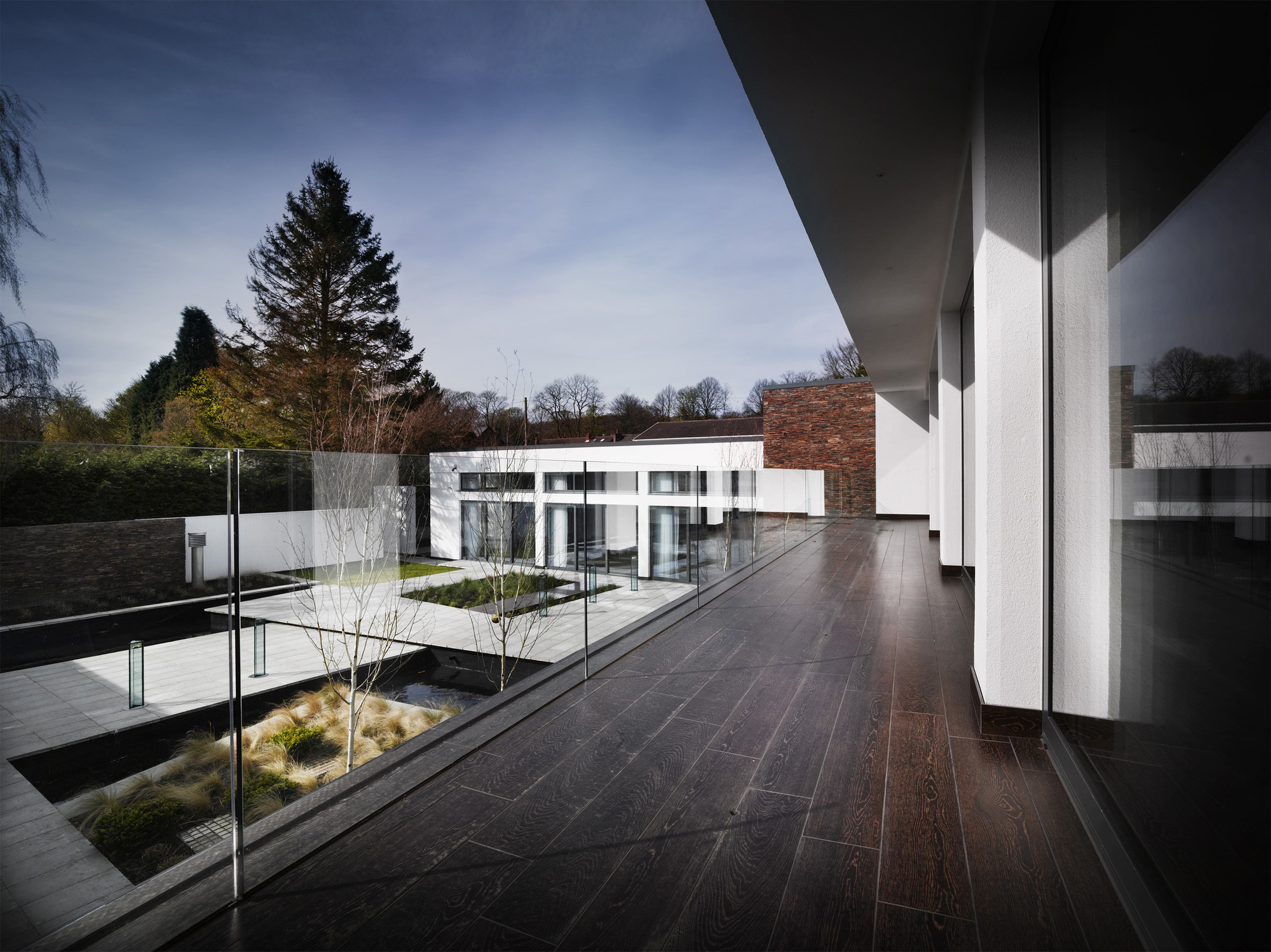 Apart from the two main wings, there is also a third courtyard wing that includes a detached poolroom and a gymnasium. The wings as well as the entertainment facilities and accommodations found within them are interlinked and can be accessed easily, which is what the clients wanted in the first place. 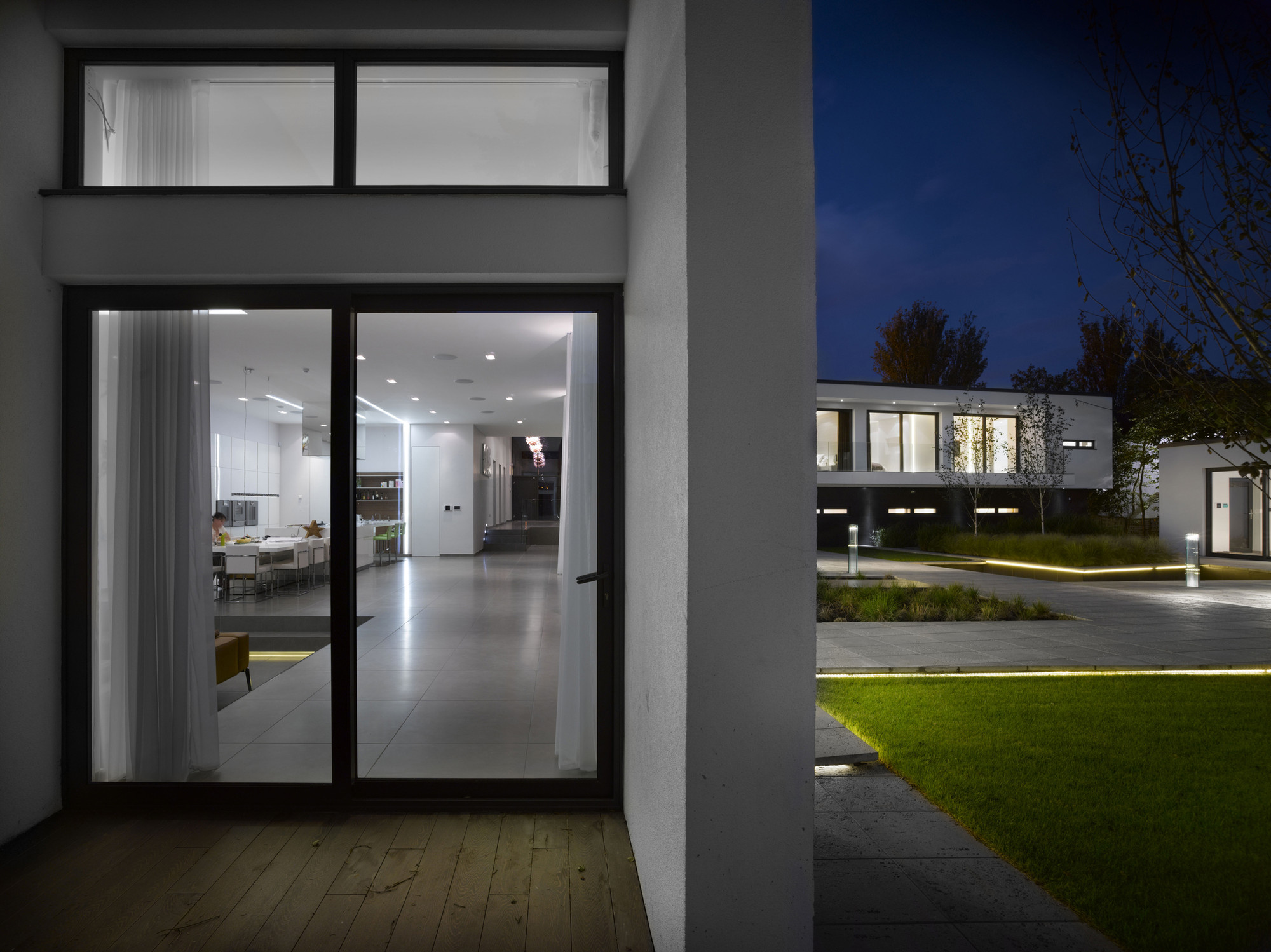 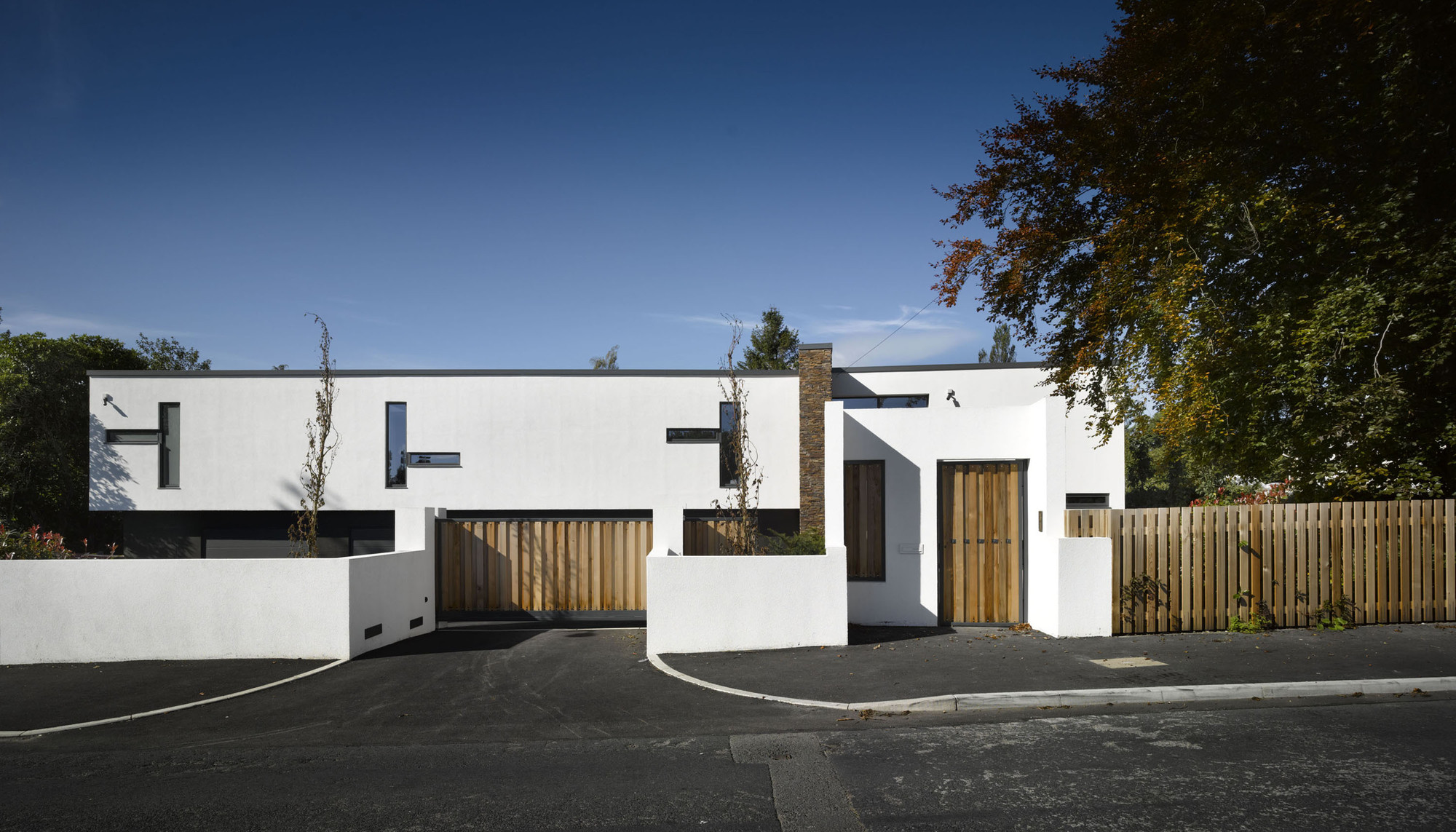 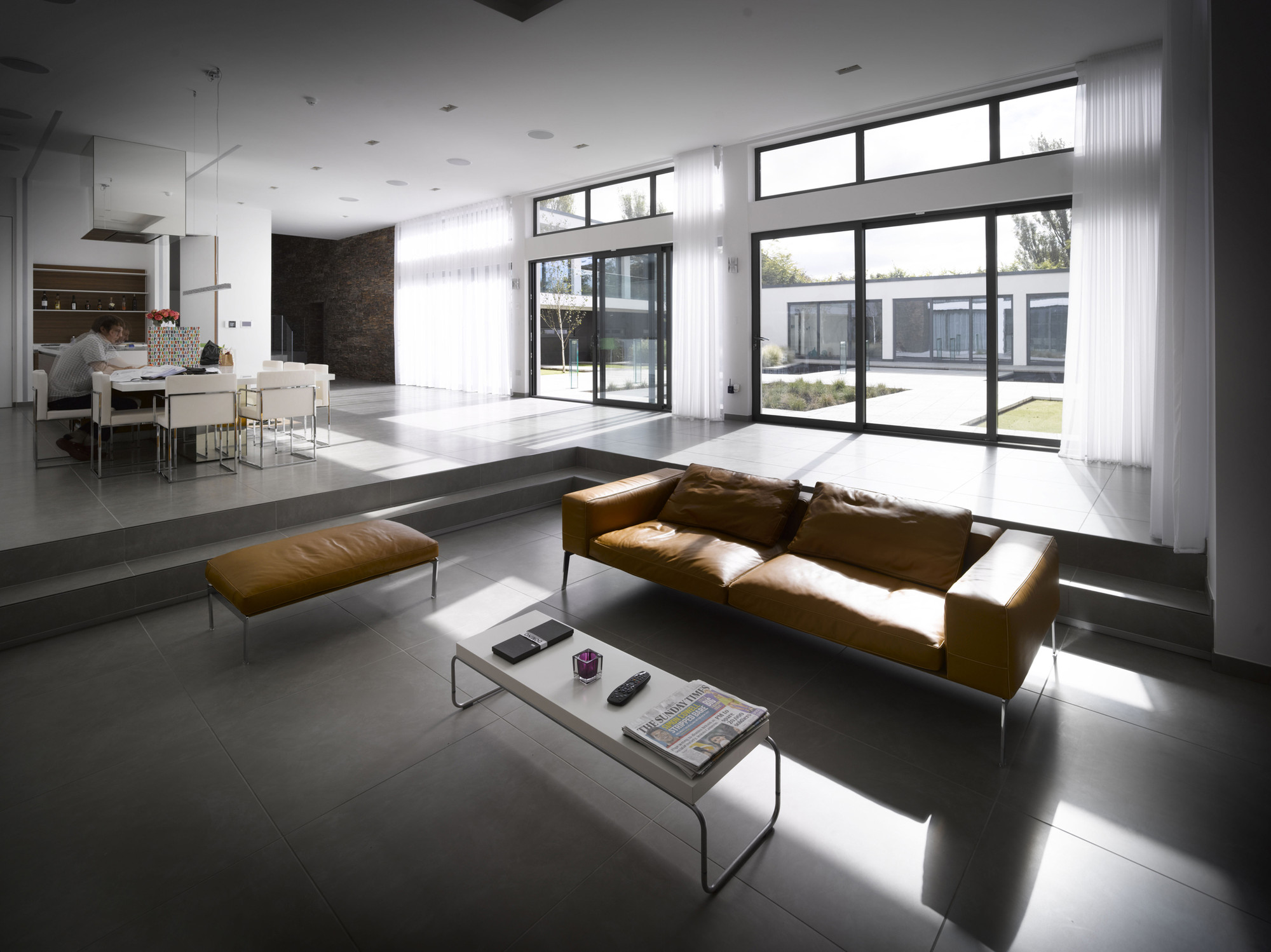 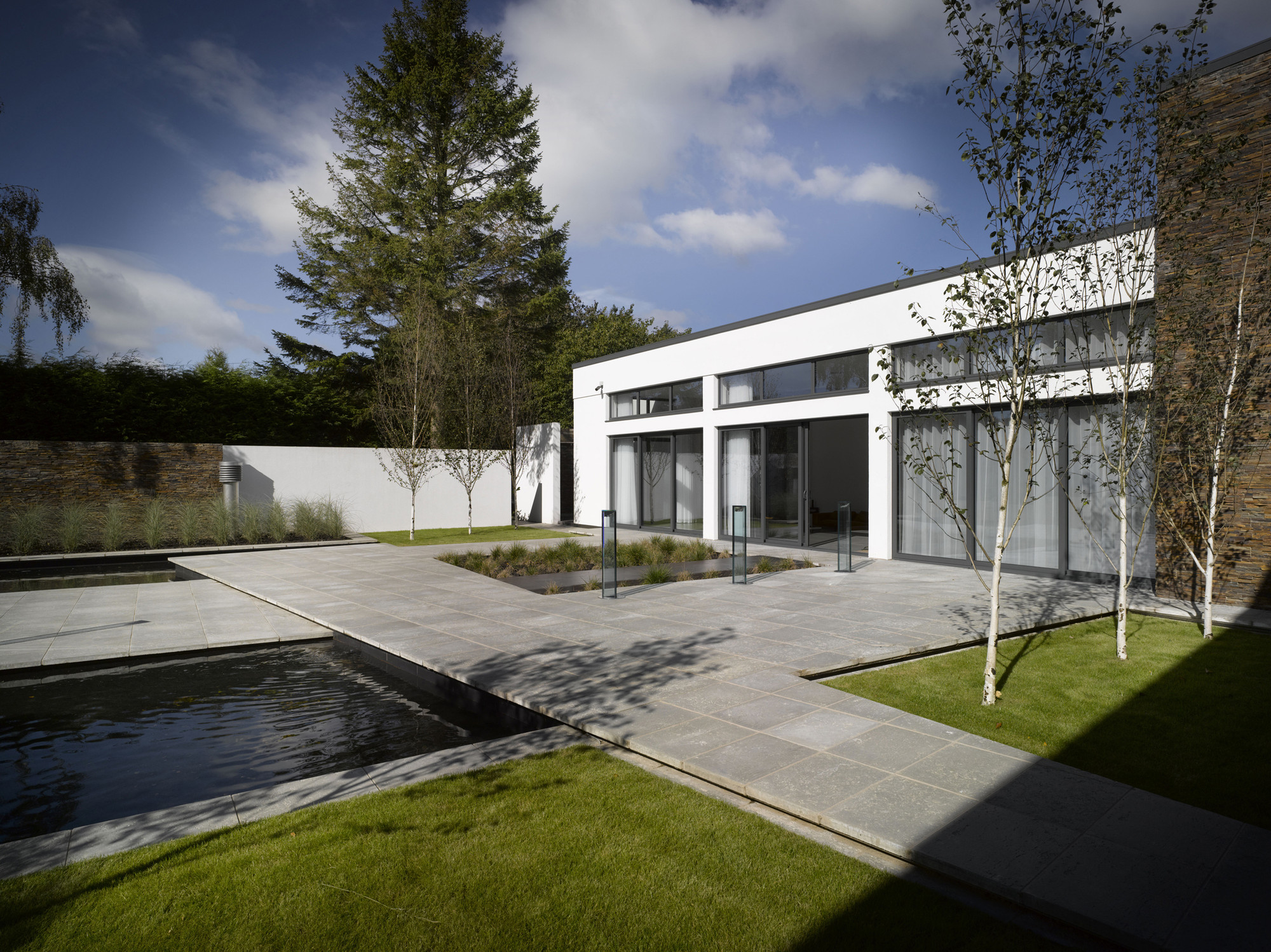 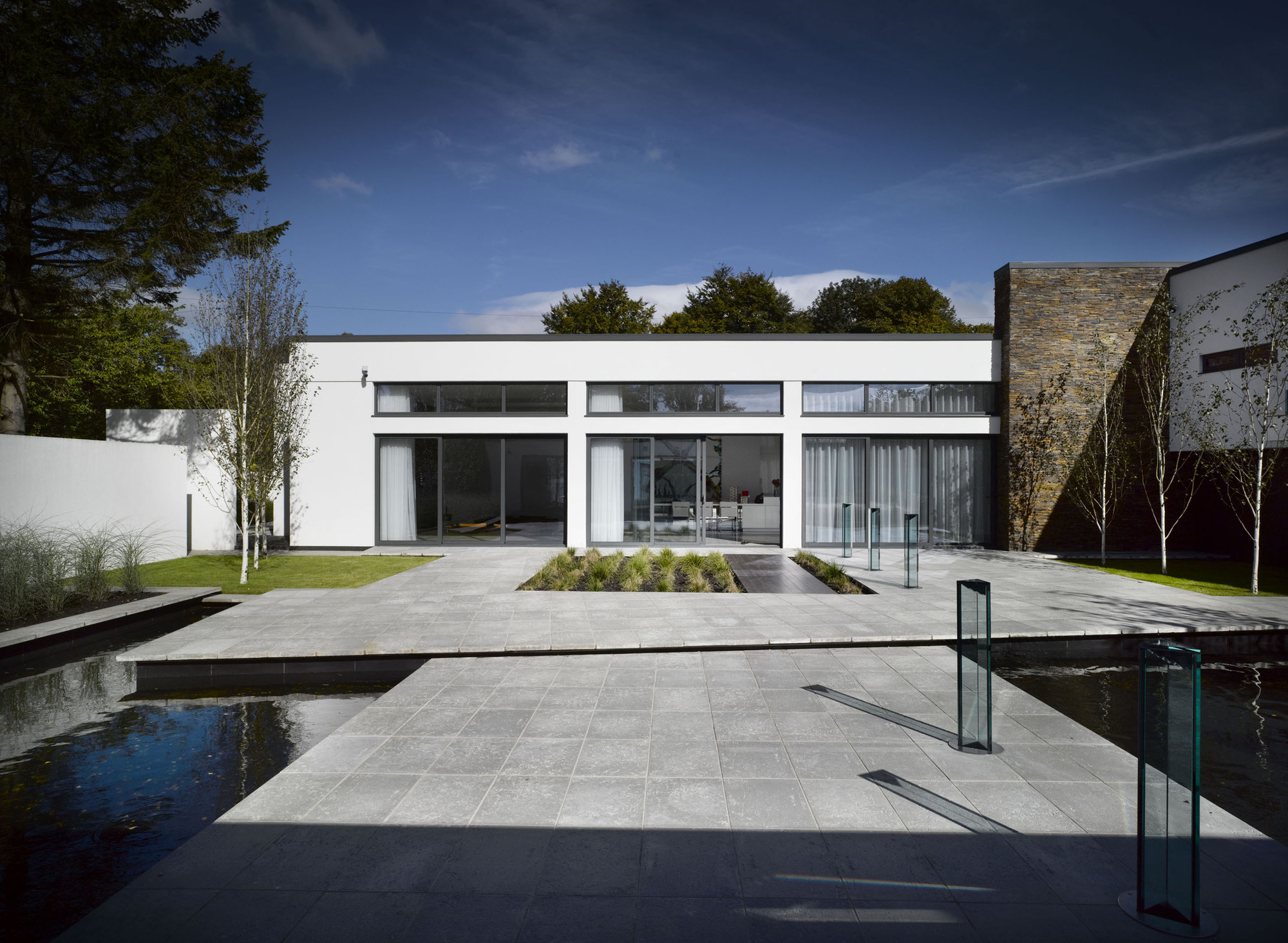 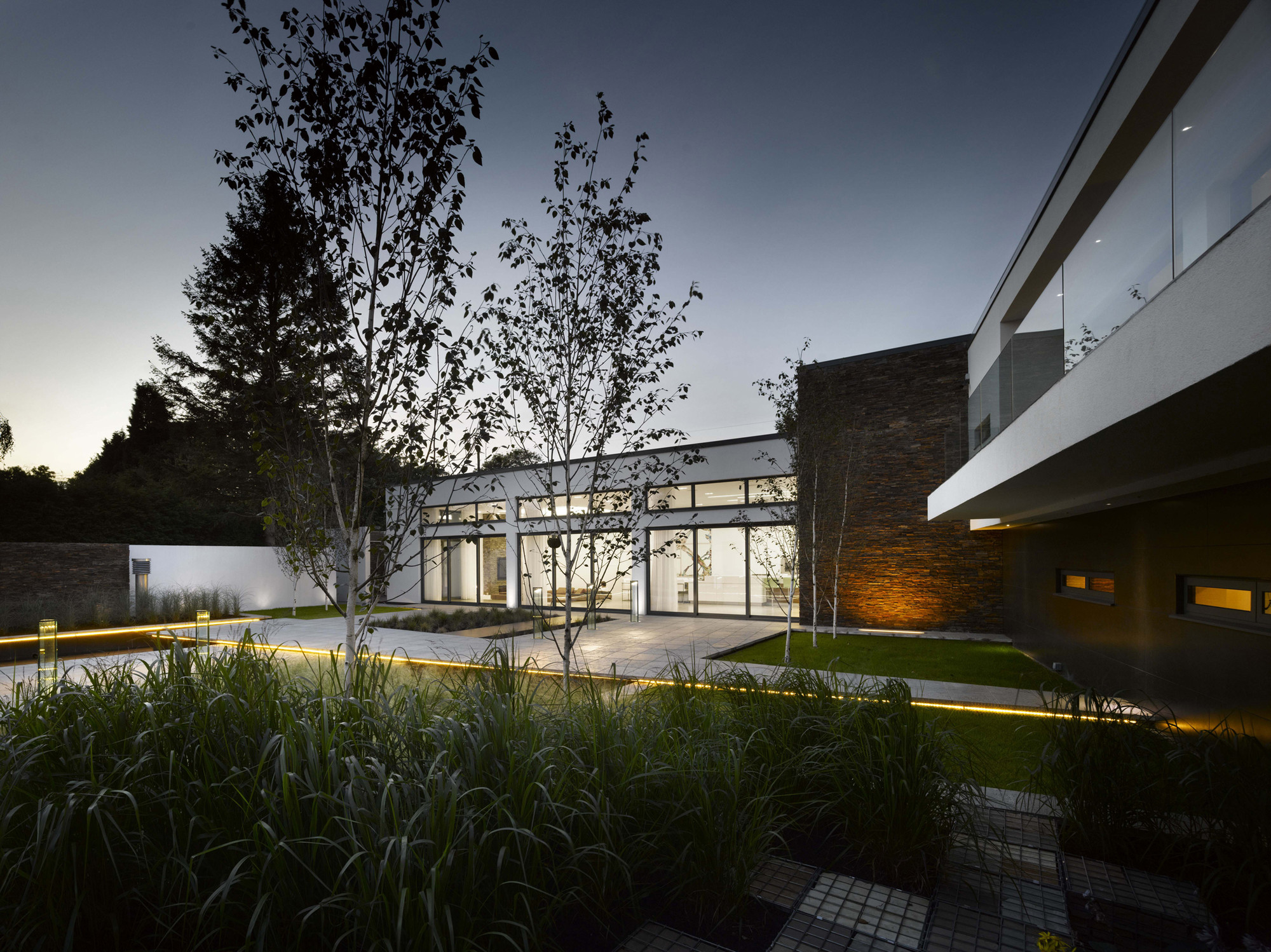 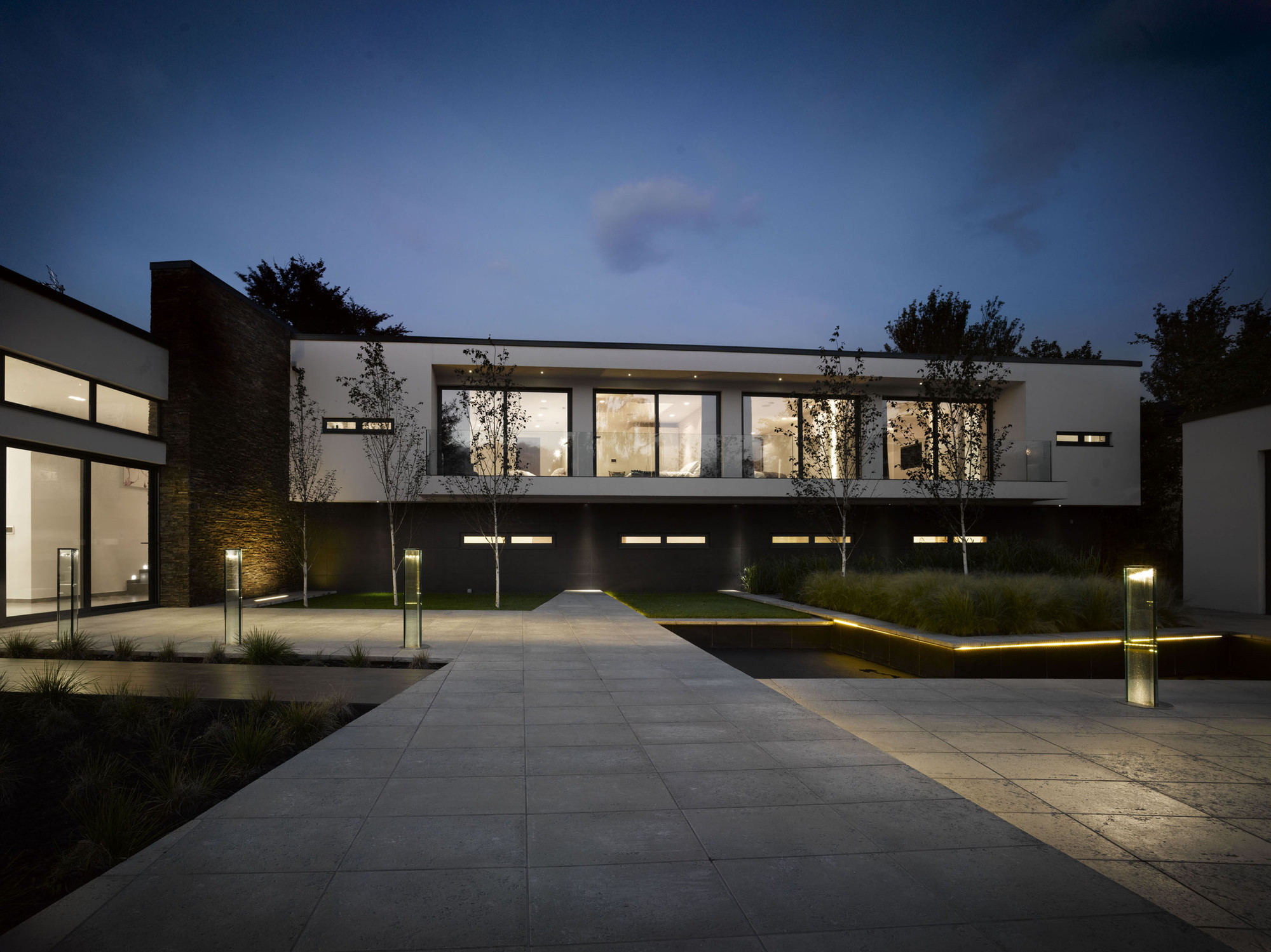 The client’s brief was simple and flexible, requiring a contemporary design for contemporary family life, creating communal spaces, but recognizing the needs for members of the family to have their own private spaces.

The shape and the orientation of the site started to generate a unique building, creating a private retreat for the family to enjoy. Through the use of generous sized patio doors, inter connected balconies to all the bedrooms, and the careful use of flooring materials the house and the courtyard link together seamlessly.

The scheme comprises of two wings, the first containing living and communal space and the second, containing the bedrooms and private spaces. A pool house forms the third boundary to a private courtyard. The house feels secluded due to the courtyard and the well-established trees surrounding the site, allowing the family to make the most of the southern aspect. From the street the house appears unassuming with a modest facade that acts as a barrier between public and private, whilst accentuating the relationship of the internal spaces connecting through to the courtyard, which forms the focal point to the home.

The design takes an inspired approach to the open plan living and aesthetic of the 1950’s Californian Pacific Modern style, evolving this in a contemporary manor and adapting to the realities of the British climate and clients requirements.

The angular and textured landscaping to the hidden courtyard, from which the two wings of the dwelling face is the primary feature of the exterior space. The fractured elements of this landscape design take direct reference from the rhythm and proportion of the house and therefore compliment the building. The finishes are purposefully restricted to a crisp white render, the graphite grey of the window frames and the rough stone of the spine / feature wall. In doing this, both the home and garden become the backdrop to the family and there lifestyle.

As above, the internal finish is very restricted to crisp white walls, the textured stone of the feature wall and the large format light grey floor tiles allowing the family’s furniture and positions to become more prominent. The internal finish complements the external finish and allows the interaction of the open plan living spaces of the inside and the private courtyard of the outside space to become seamless.

As the dwelling was constructed in the northwest of England, the primary challenge was the fluctuating weather conditions, with there being particularly bad weather in the summer of 2008 when the construction began. Fortunately the superstructure was constructed from insulated concrete formwork, which can be poured regardless of the weather. The protective nature of the courtyard now gives the impression that the home has been transported to the Mediterranean rather then the suburban outskirts of an industrial British town.

All construction products were specified with sustainability in mind, encompassing expected lifetime of the product, excellent thermal capacity and limited transportation distance. Internally, all finished were limited to a crisp contemporary look allowing the families furniture and positions to become prominent.

The third wing of the courtyard established by the two primary wings of communal and private space is formed by a detached poolroom and gymnasium, which interacts with the courtyard in the same manor as the main living wing and essentially forms a seamless juncture between swimming pool, courtyard and living space, which successfully acknowledges the clients original brief of interlinked space. 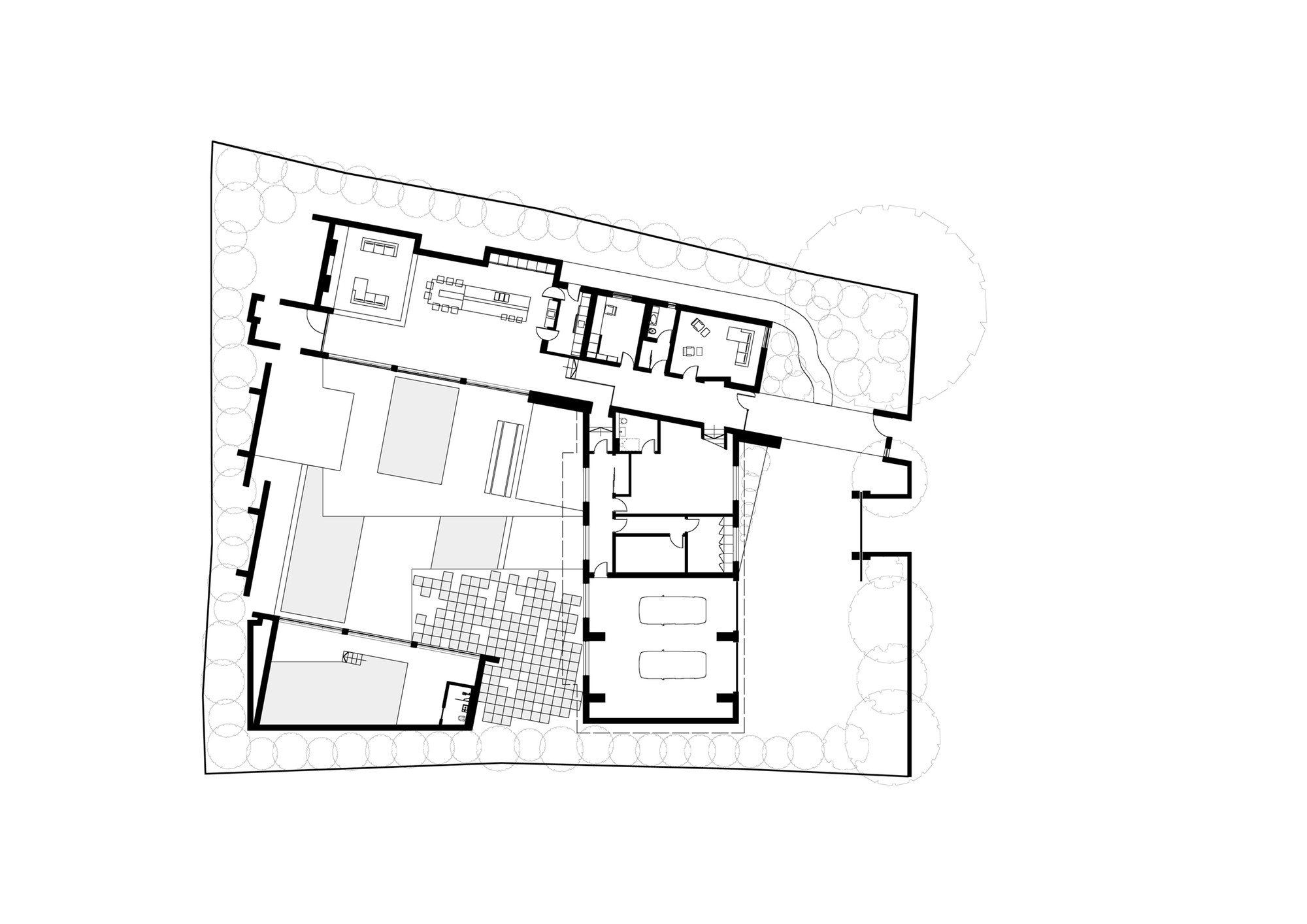 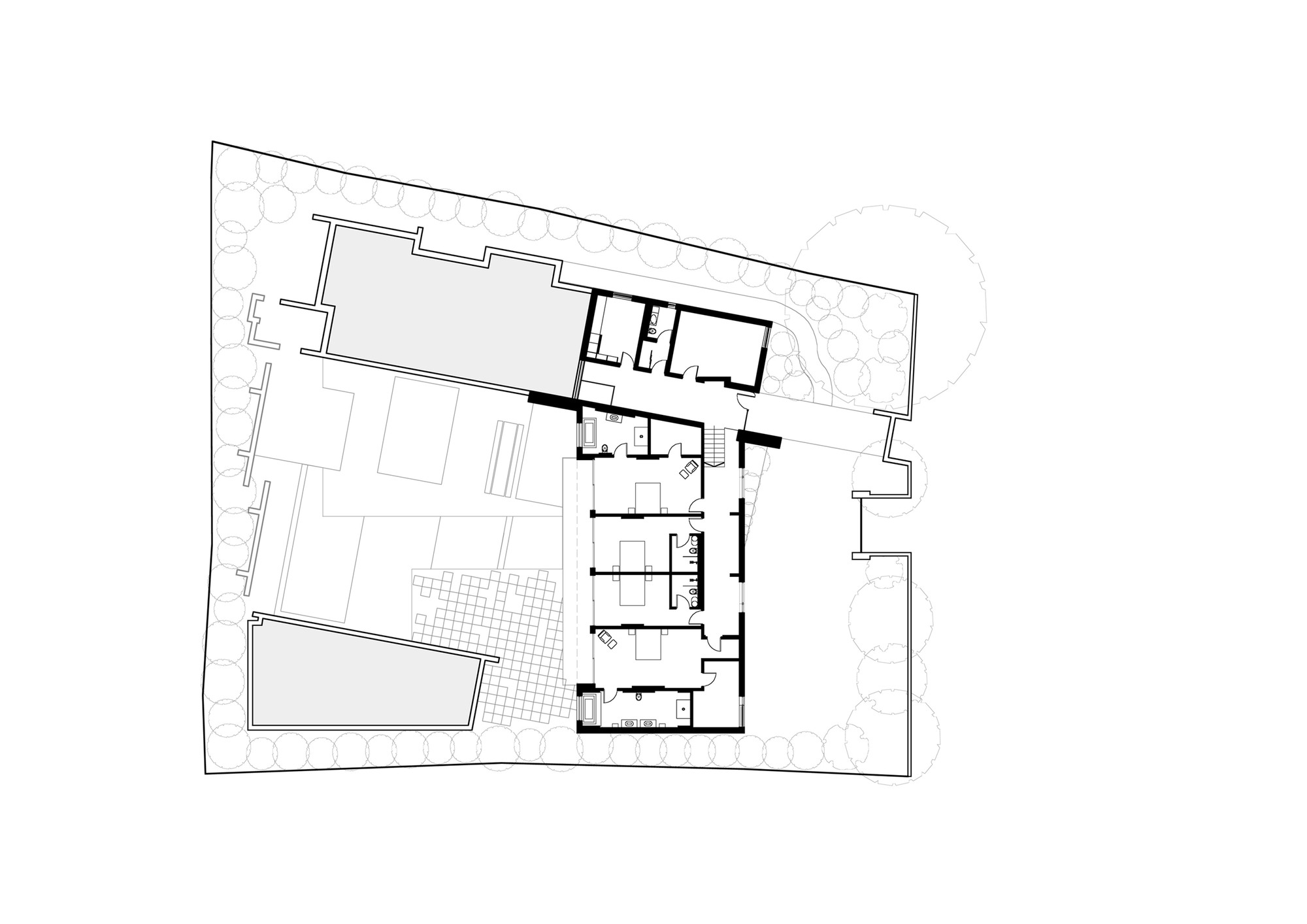 House at Chicureo In Santiago, Chile

How to clean a living room: an expert guide