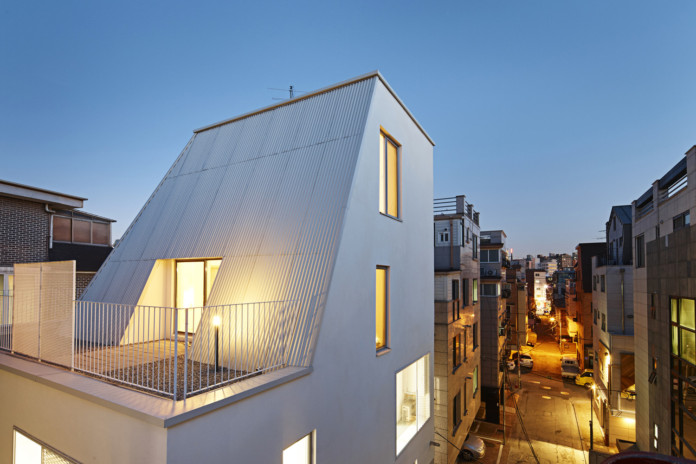 The White Cone House is a modern and versatile project that was finished in 2014 in Seoul, South Korea. Designed by a company named apparat-c, the residence features 3,562 square feet of space and spreads vertically on five levels. At the ground floor, it boasts an office space fronting the street as well as a garage, while its second and third stories house six offices, all of which can leased. The final level flaunts a double-story penthouse, which comprises a kitchen, a dining area, a living room and an outdoor terrace at its lower floor, while its upper floor has a spacious bedroom and a bathroom. 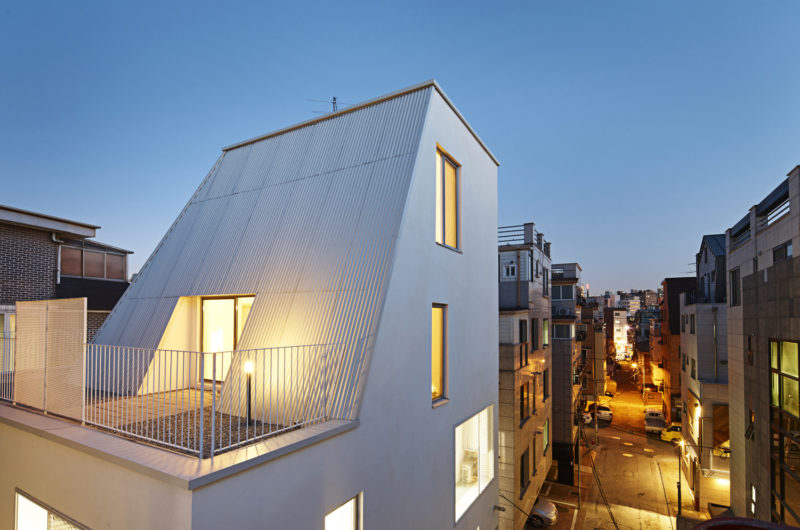 The building features an exterior insulation finishing system on its outer walls, while its sloped roof boasts semi-transparent corrugated polycarbonate. In order to ensure that all living areas would receive plenty of natural light without compromising privacy, the architects created a series of balconies with both permeable and screening characters. 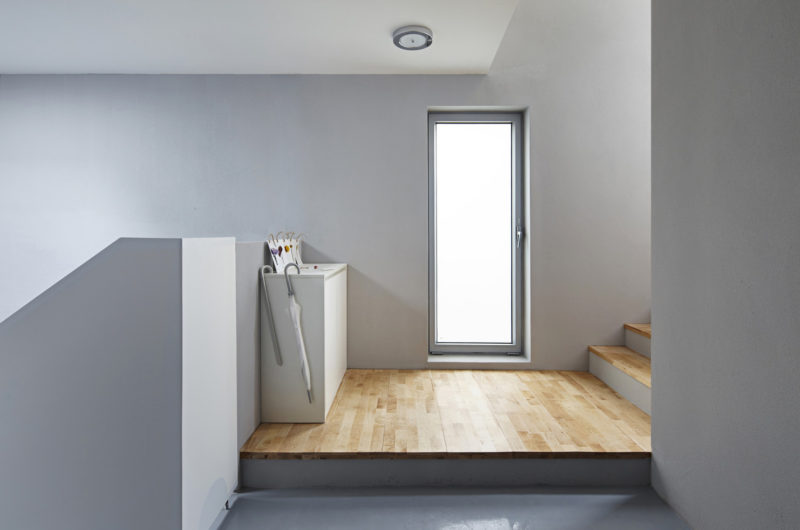 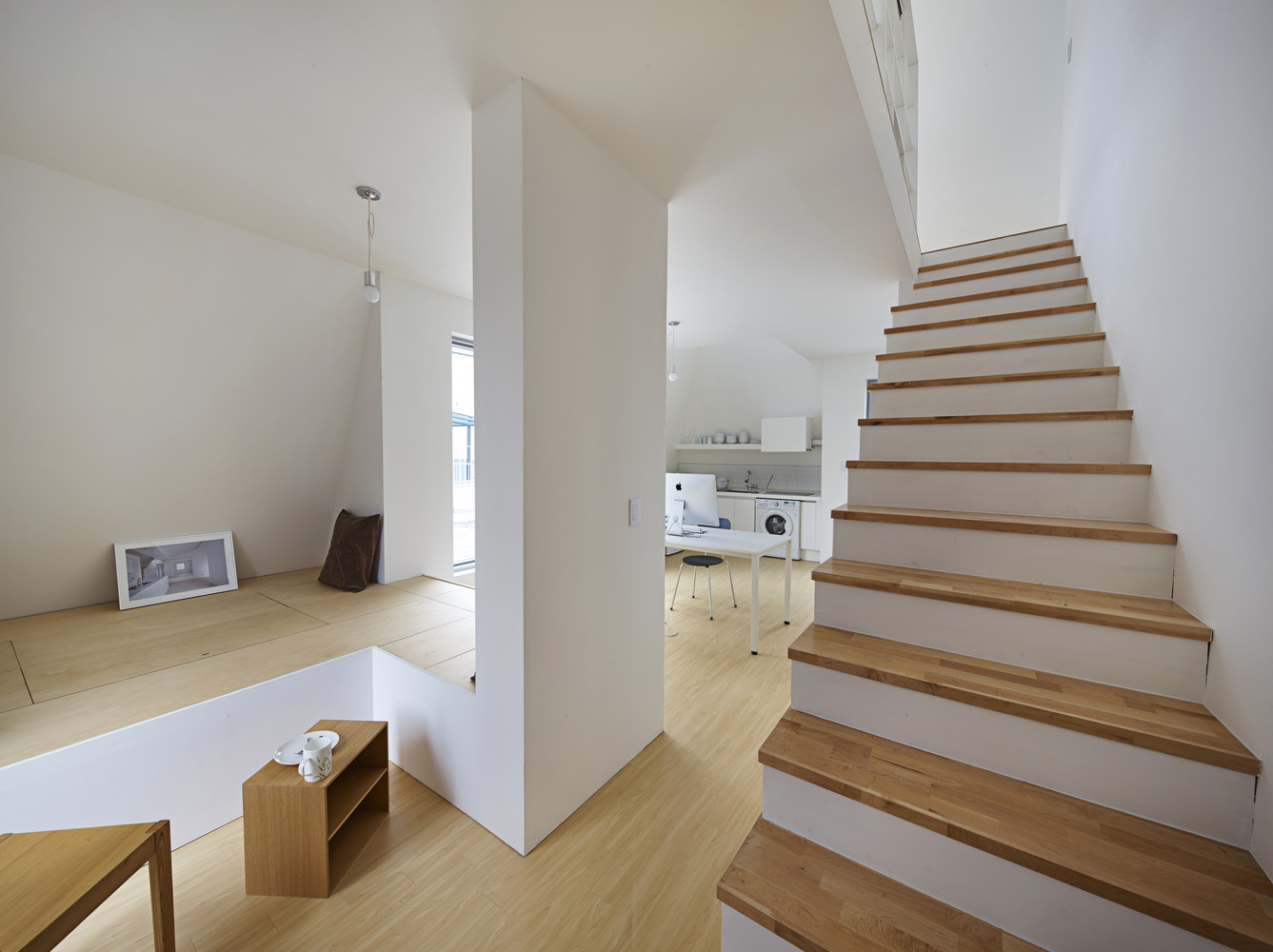 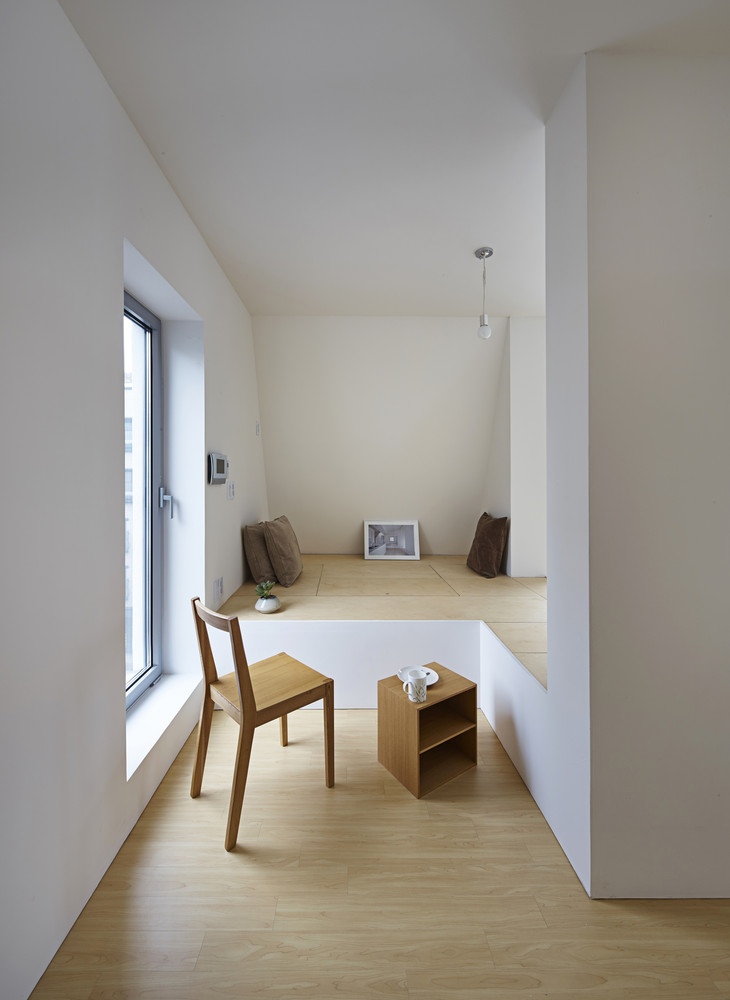 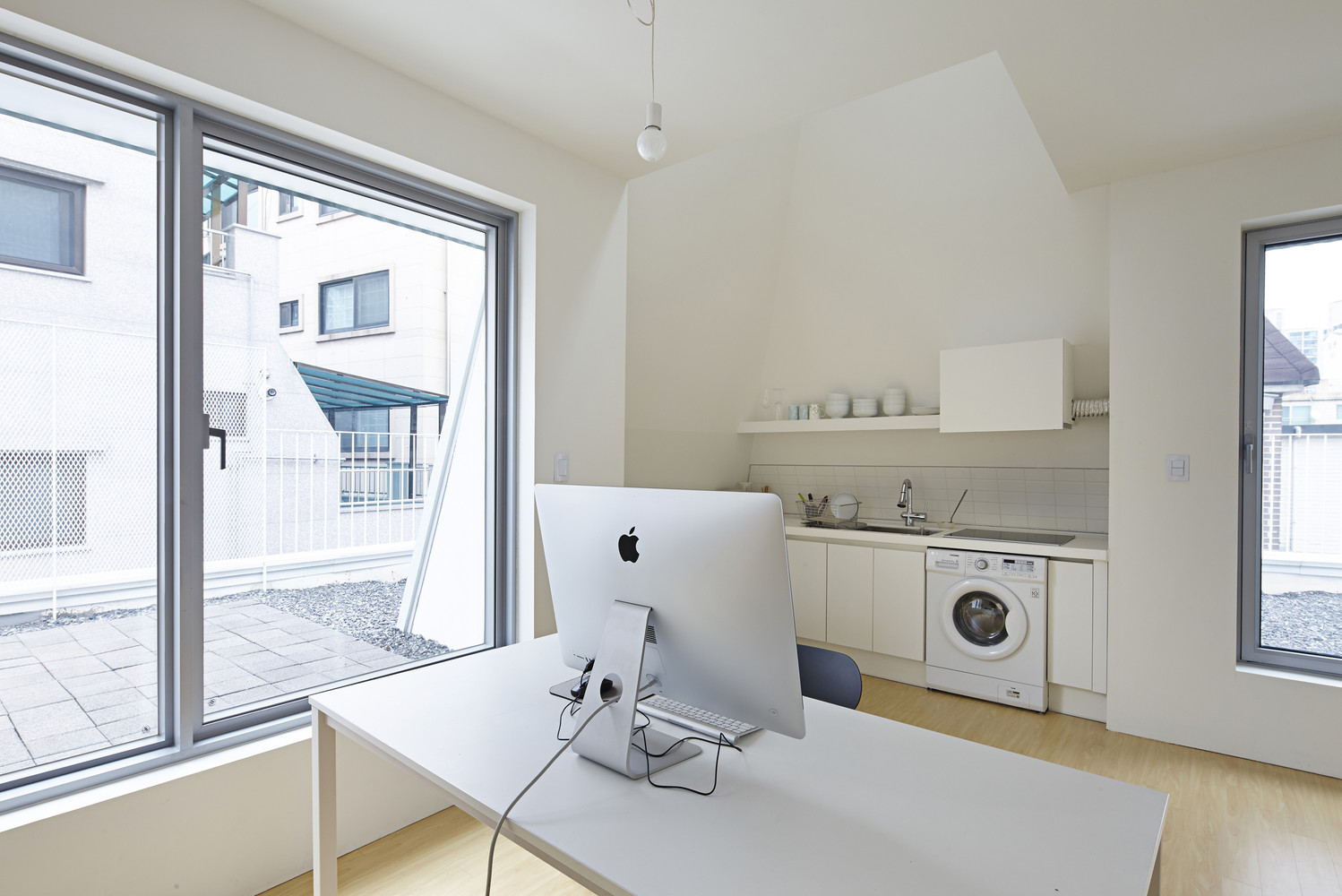 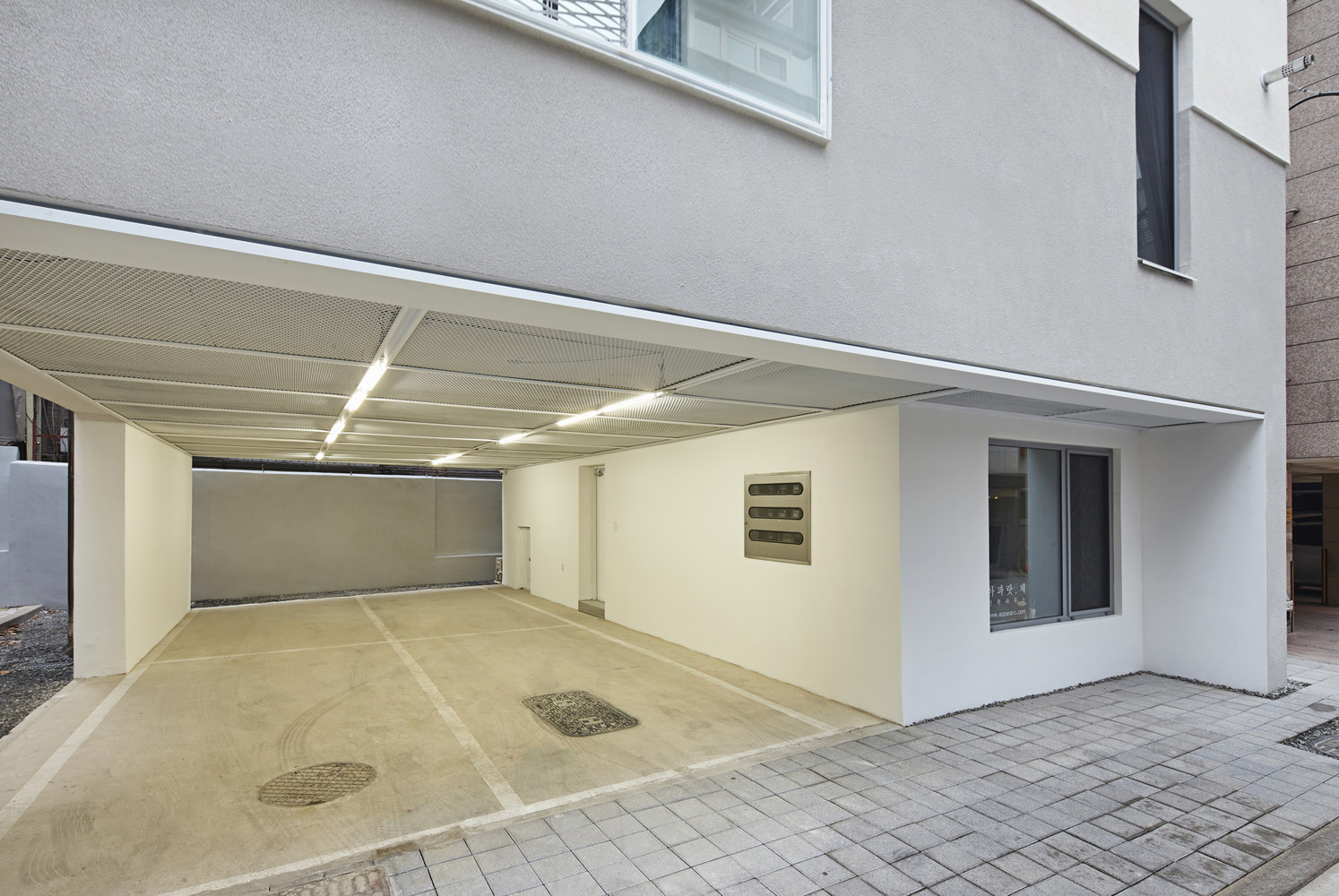 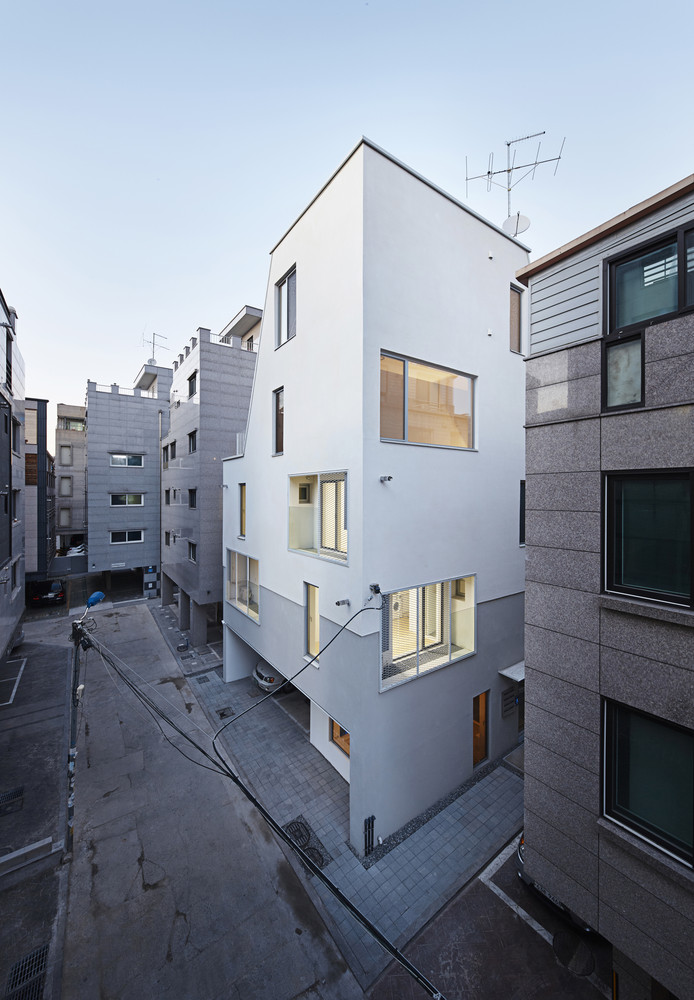 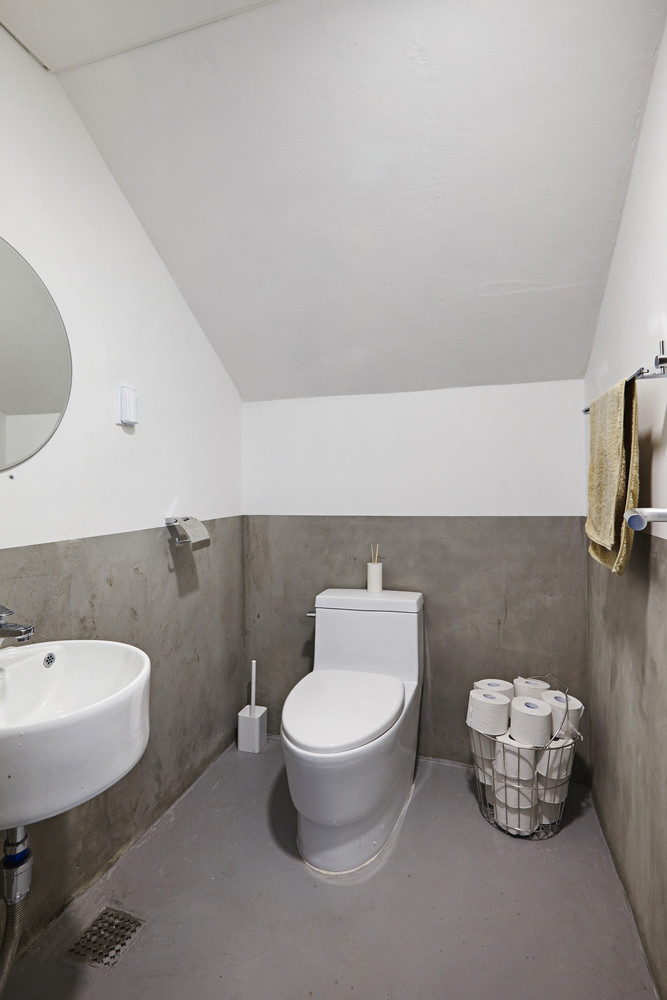 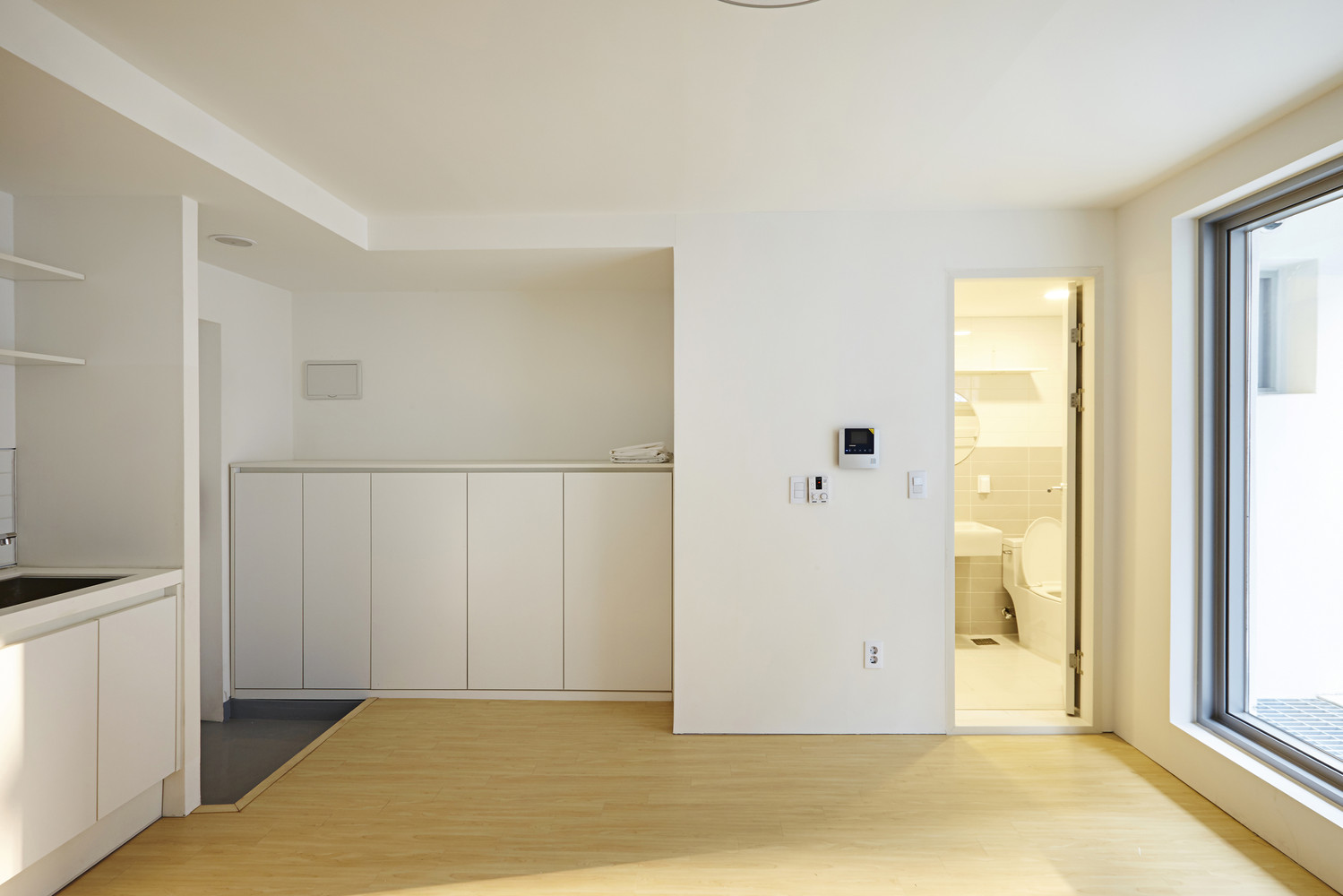 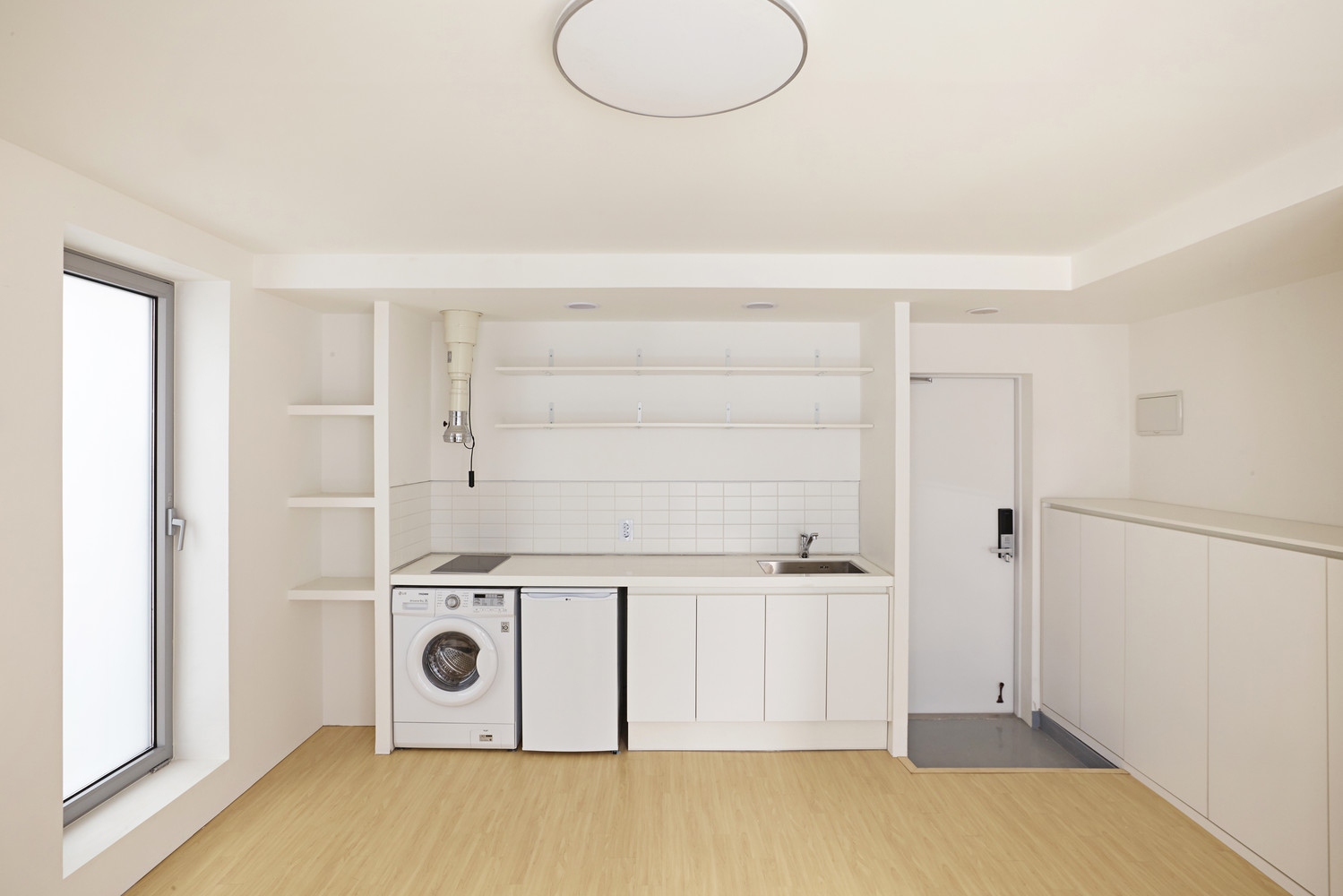 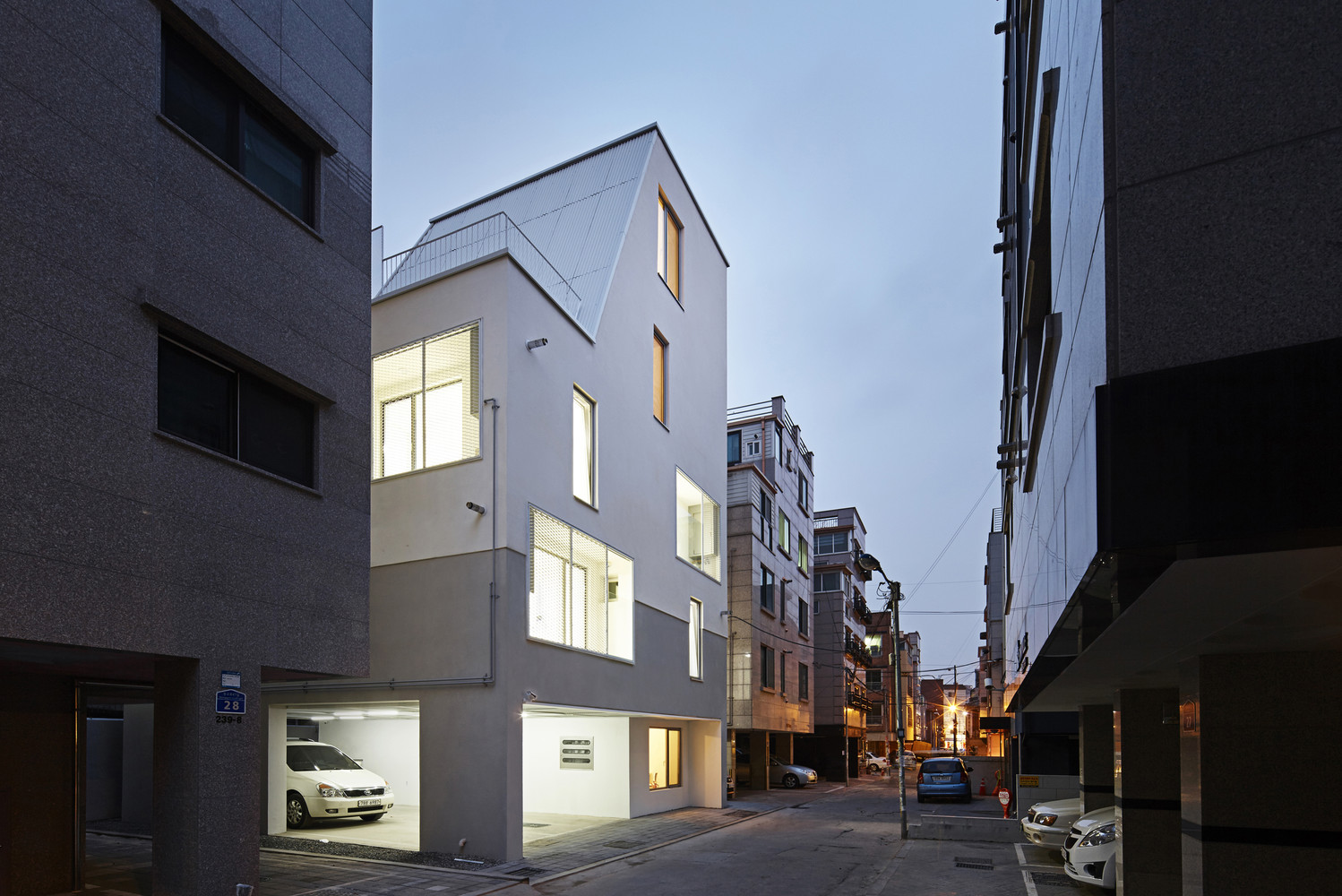 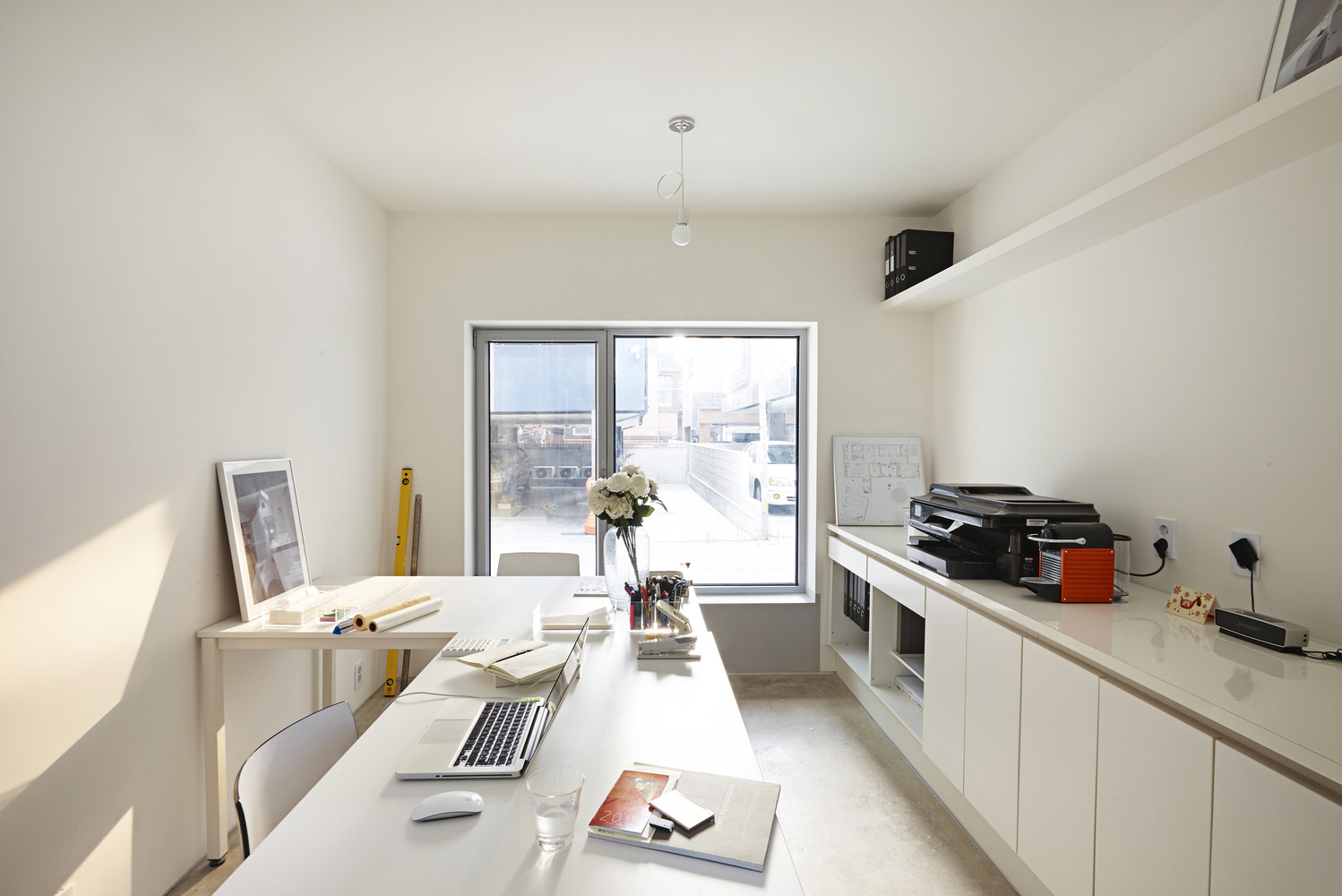 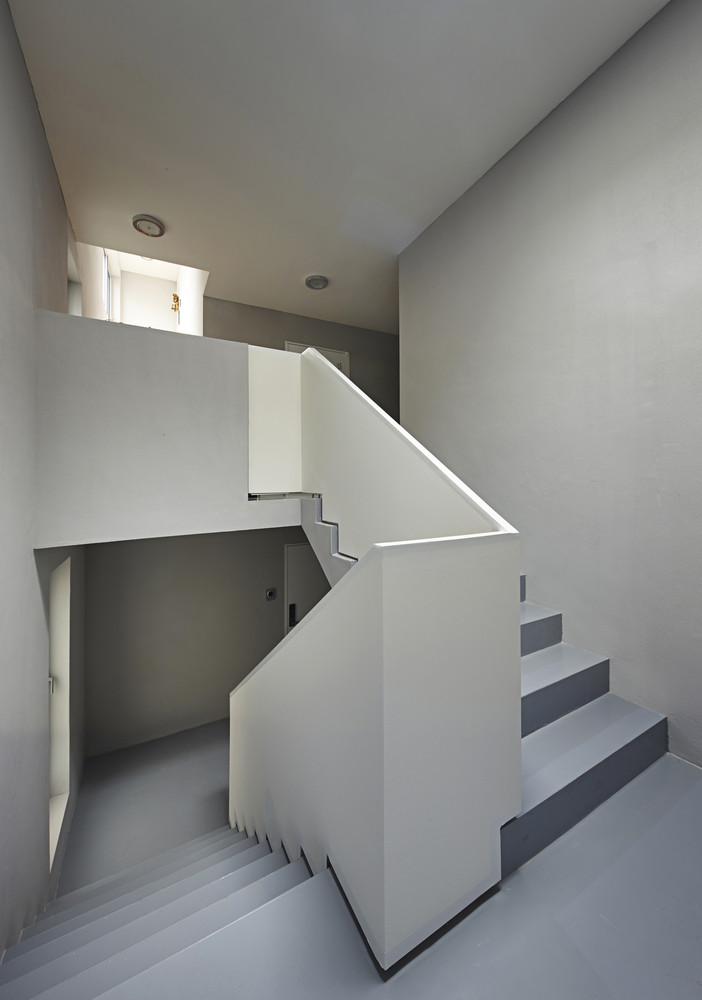 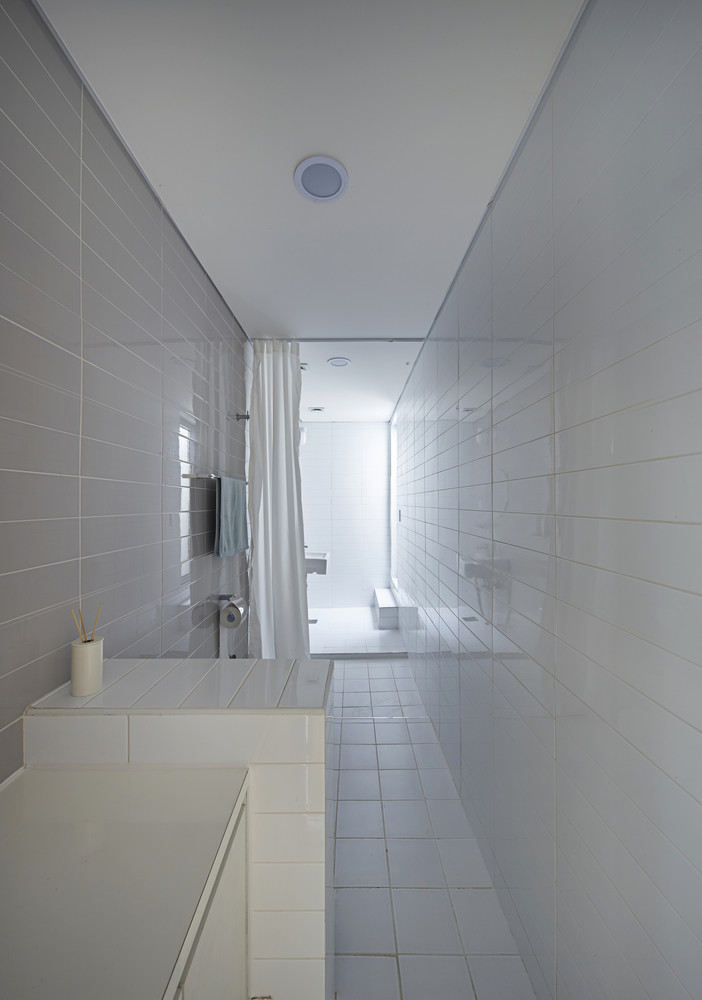 On the ground level with pilotis is the garage for the building and on one side is neighborhood facility(office). Second and third levels accommodate total of six studio units and on the top level is a double story penthouse. The garage was efficiently laid out to maximize neighborhood facility(office) space that fronts the street. Common stair is located on the north side of the site to maximize sunlight exposure to all units. The six studio units on the second and third levels have leasable area of 20 – 24sq. meters. In planning the studio units, the key challenge was how to bring enough light into the units and yet maintain privacy which may seem conflicting ideas. The idea of having enough ventilation and sunlight seem a farfetched idea in the densely populated multi-unit and multi-family housing areas, not to mention privacy.

In the units of White Cone House, the balconies are the transition areas and thus can be diagrammed as “living space > balcony>neighbor”. The balconies have both permeable and at the same time screening characters and perform like metal curtains that allow permeability of light into the units and screen visibility from outside. When looking out from the living room, the metal curtain screens off the more dull view outside. Often times in densely populated areas, the bathroom windows are dysfunctional because they cannot be opened due to privacy. To resolve this issue, the bathroom windows of the White Cone House are placed on one side of the balcony wall.

The two story penthouse on the top floor has dining, kitchen, a small living room and a outdoor terrace on the lower level and on the upper level is a spacious bedroom and a bathroom. The outdoor terrace is created from setting back the living space from adjacent building to allow sunlight and also to foreshorten sightline into the unit.

As one can tell from the name, White Cone House, the strong image of the massing comes from a combination of plumb extrusion of the ground level to third level and tapered cone volume on the fourth and fifth levels(penthouse). To express the form, the exterior skin uses exterior insulation finishing system(EIFS) except on the sloped roof where constructability was a challenge, semi-transparent corrugated polycarbonate was used instead. The perforated guardrails and exterior curtains on the balconies mitigate the sightline into the units and still allow exterior openness for the units. 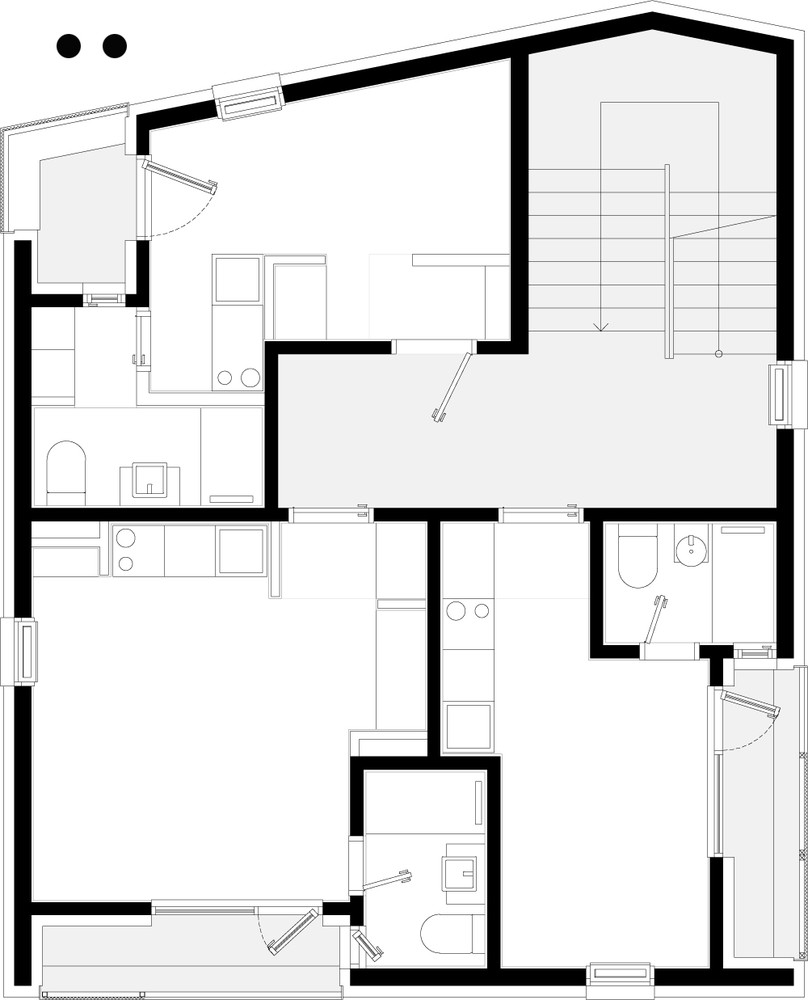 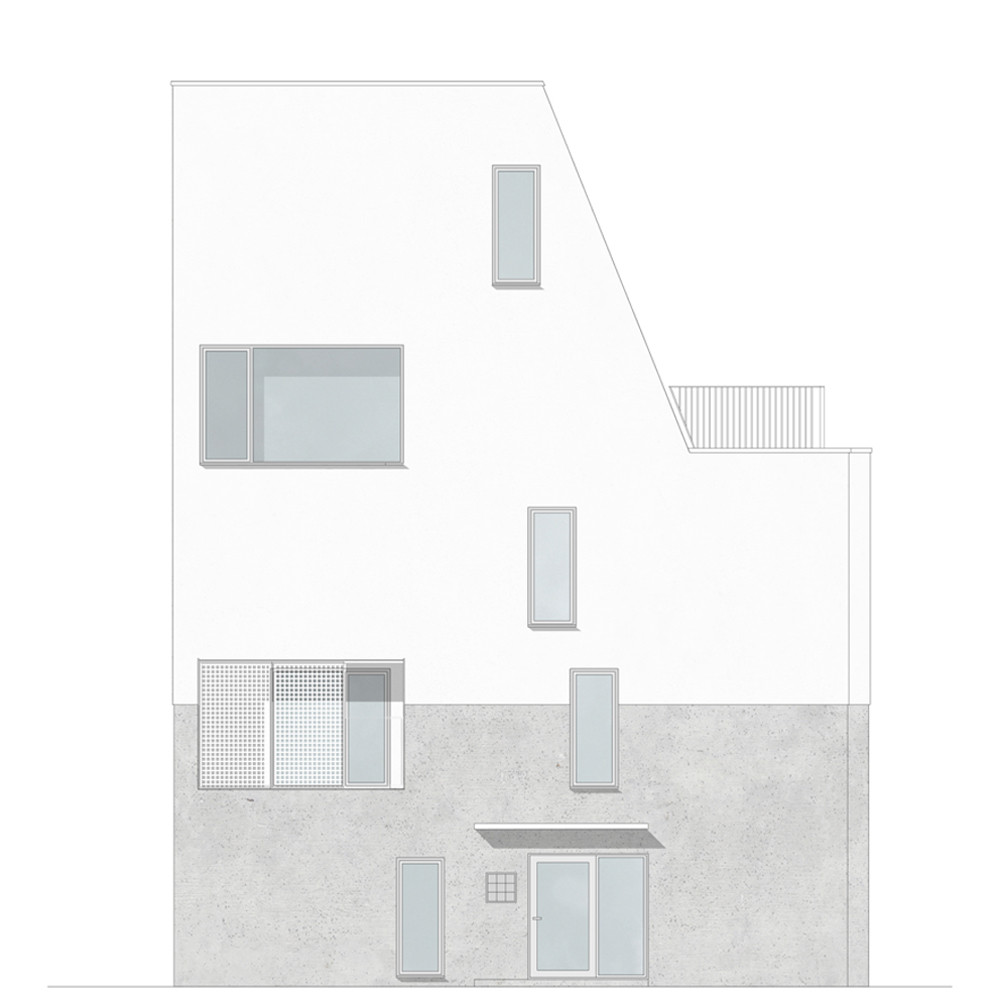 The Top 5 Things to do When Your House is on...