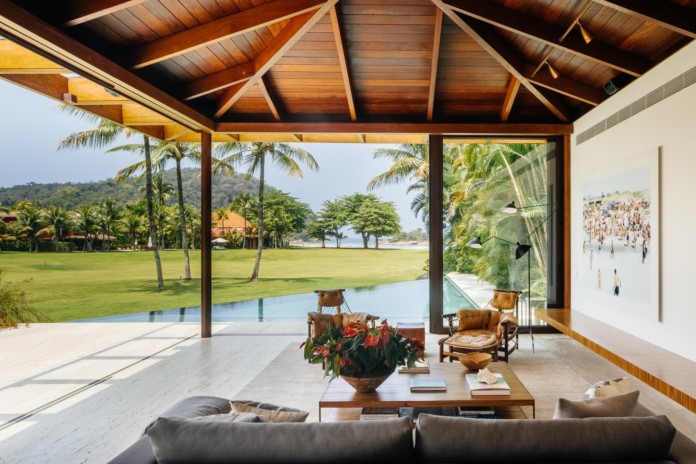 The contemporary RT Residence was built in 2014 in Laranjeiras, Brazil by Jacobsen Arquitetura, and it features 5,059 square feet of space. When designing this place, the architects were faced with the challenge of creating a two-story home that would look as if it only had a single floor. This was achieved by elevating the primary level to 4,9 feet in order to make room for a lower, half-buried floor. 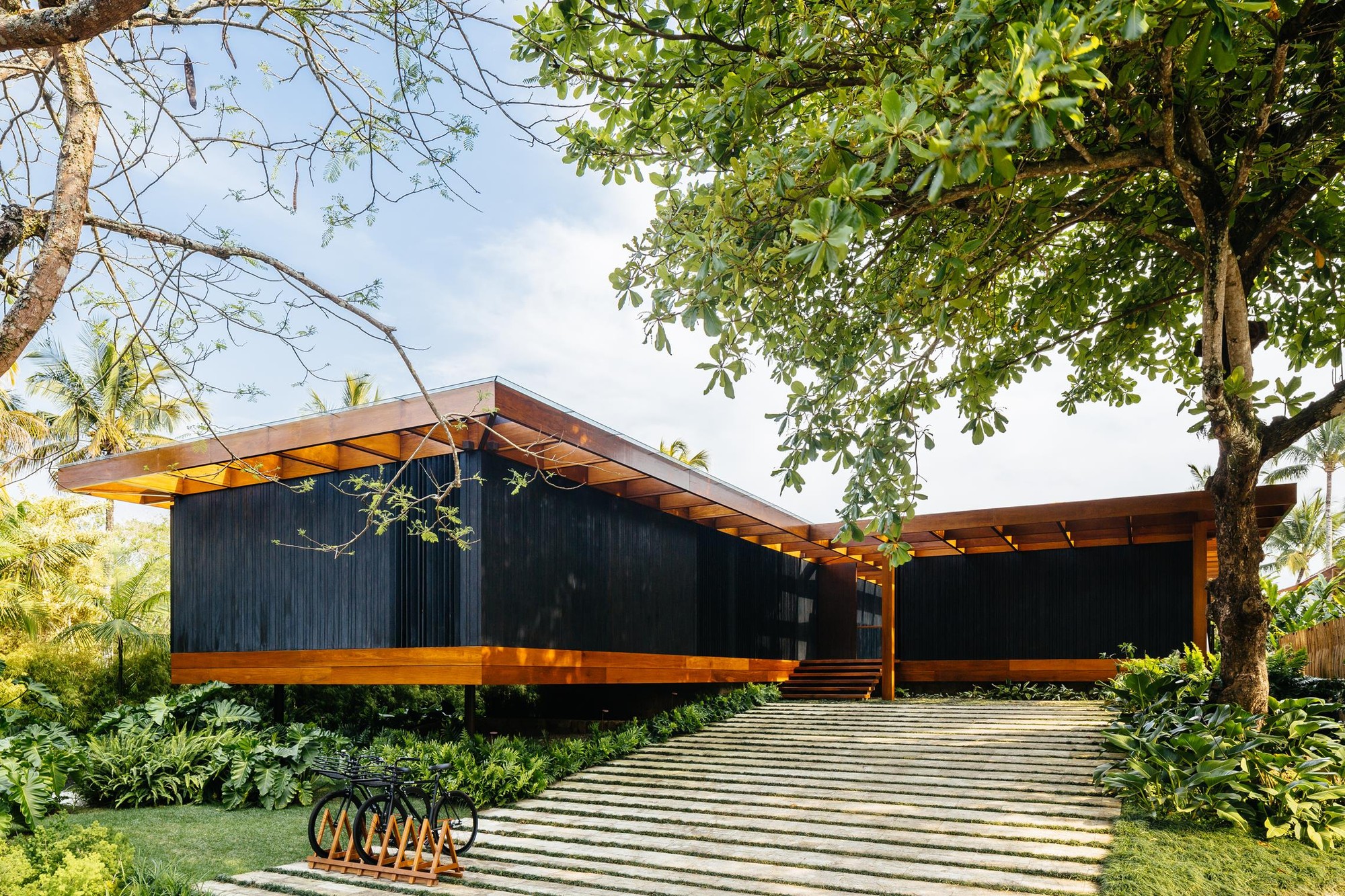 The lower floor benefits from natural light and natural ventilation, and it comprises the service areas as well as the social and entertainment spaces such as the gymnasium, sauna and home theater. The residence is accessed from the upper floor, which is composed of two separate volumes connected by a roof. The architects also needed to comply with requirements for a sloping roof, and even though the roof is indeed slightly sloped when viewed from the inside, it appears flat on the outside.
The structure was put together using reinforced concrete, steel beams and wood. 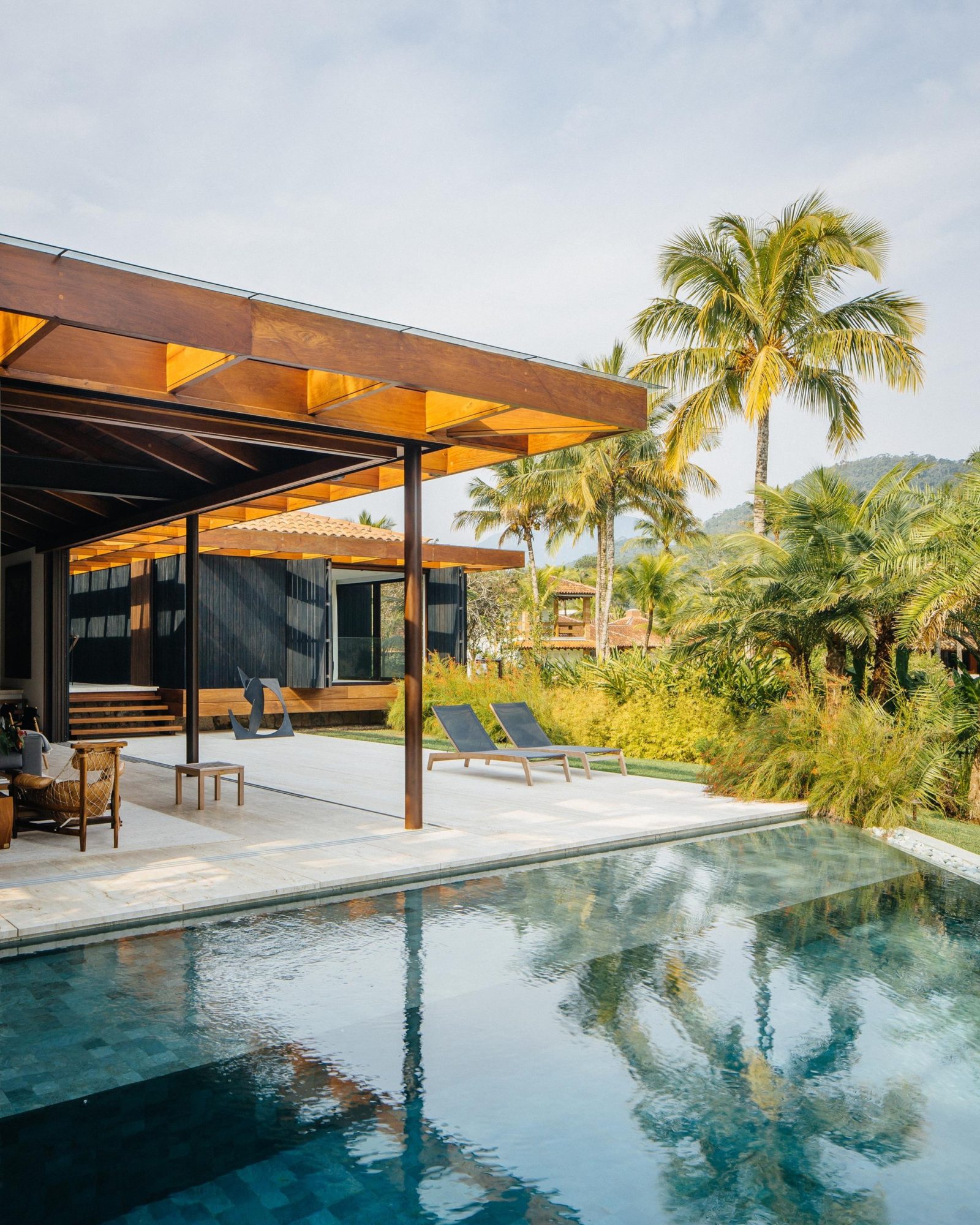 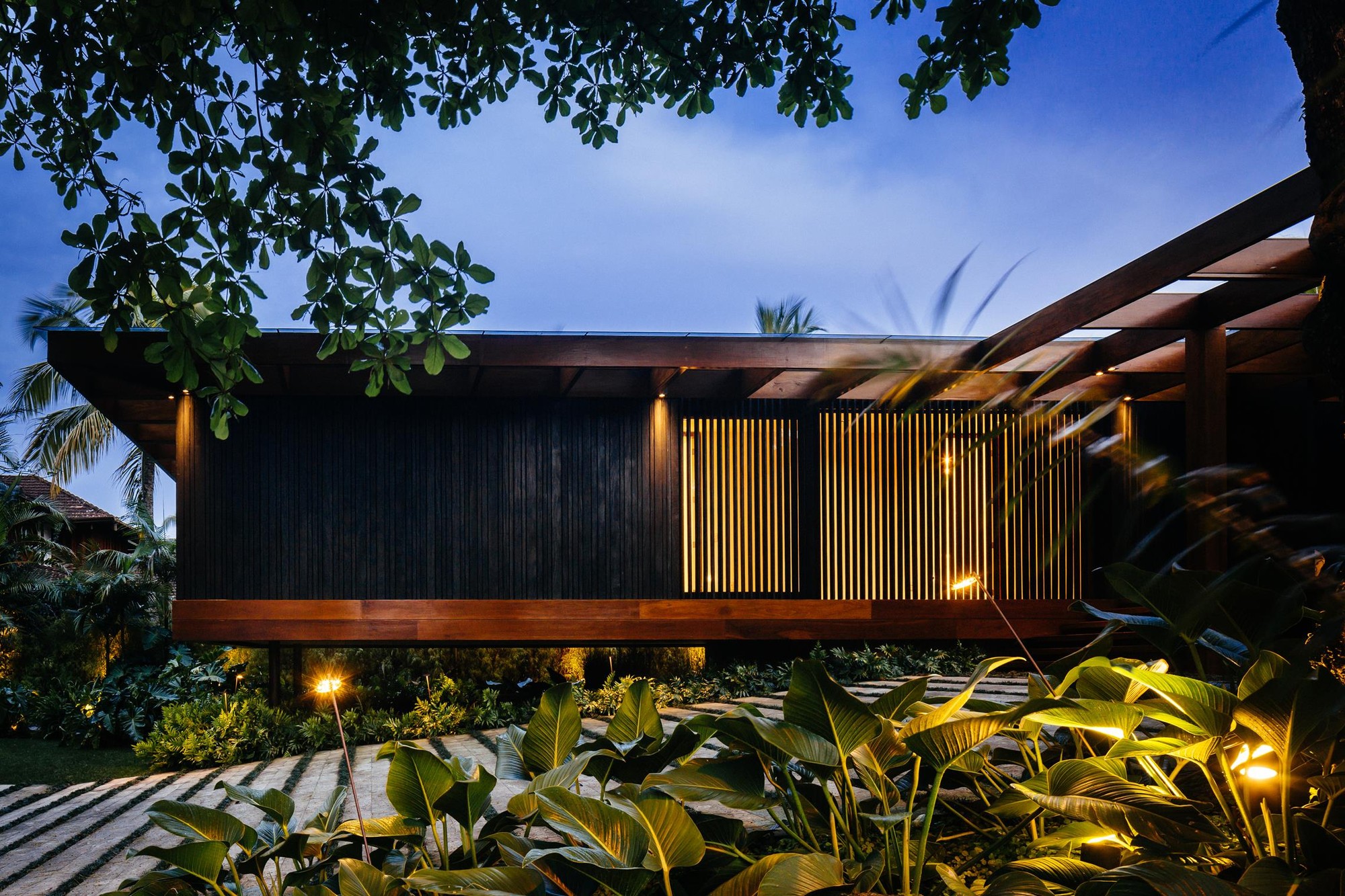 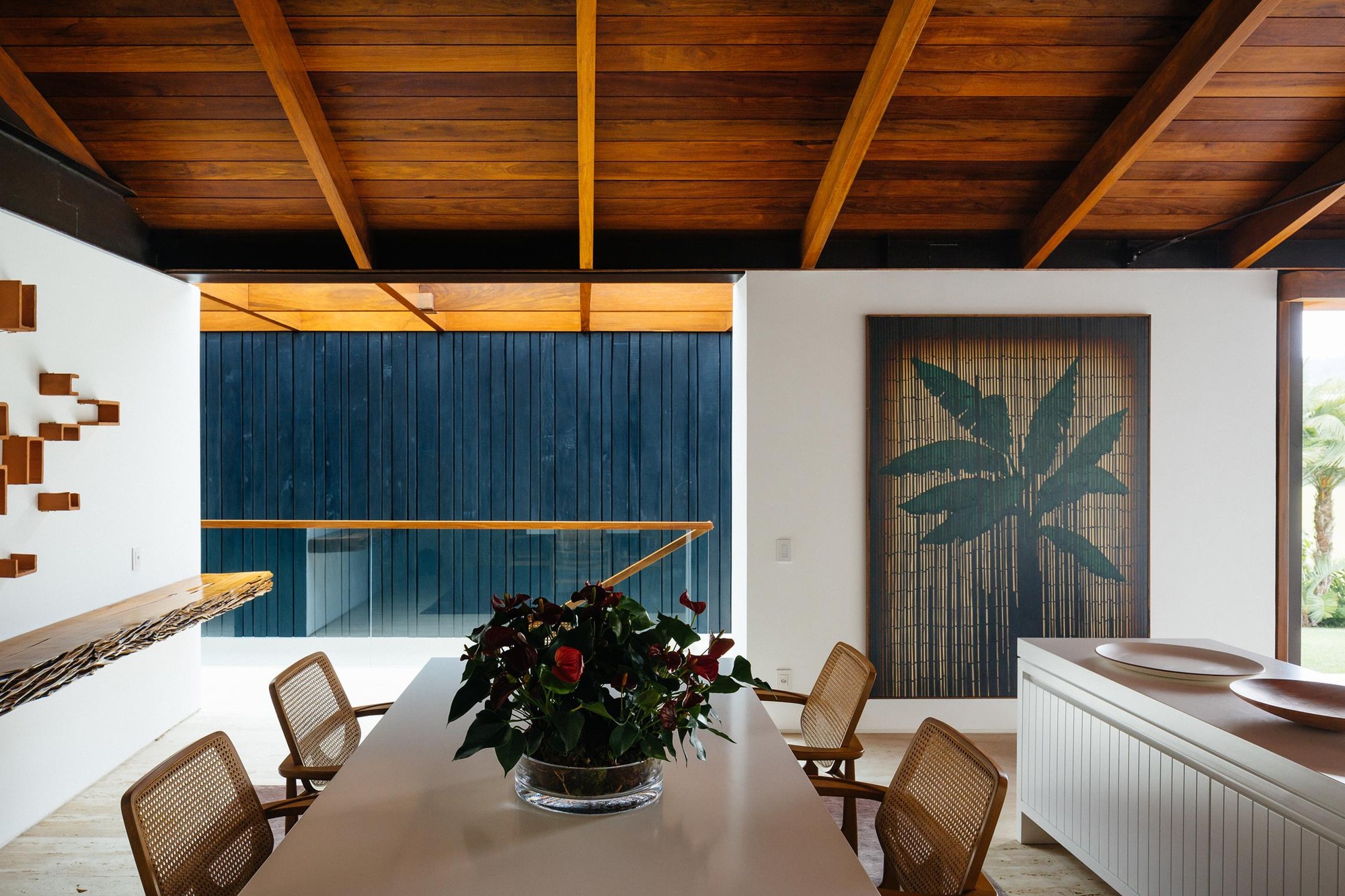 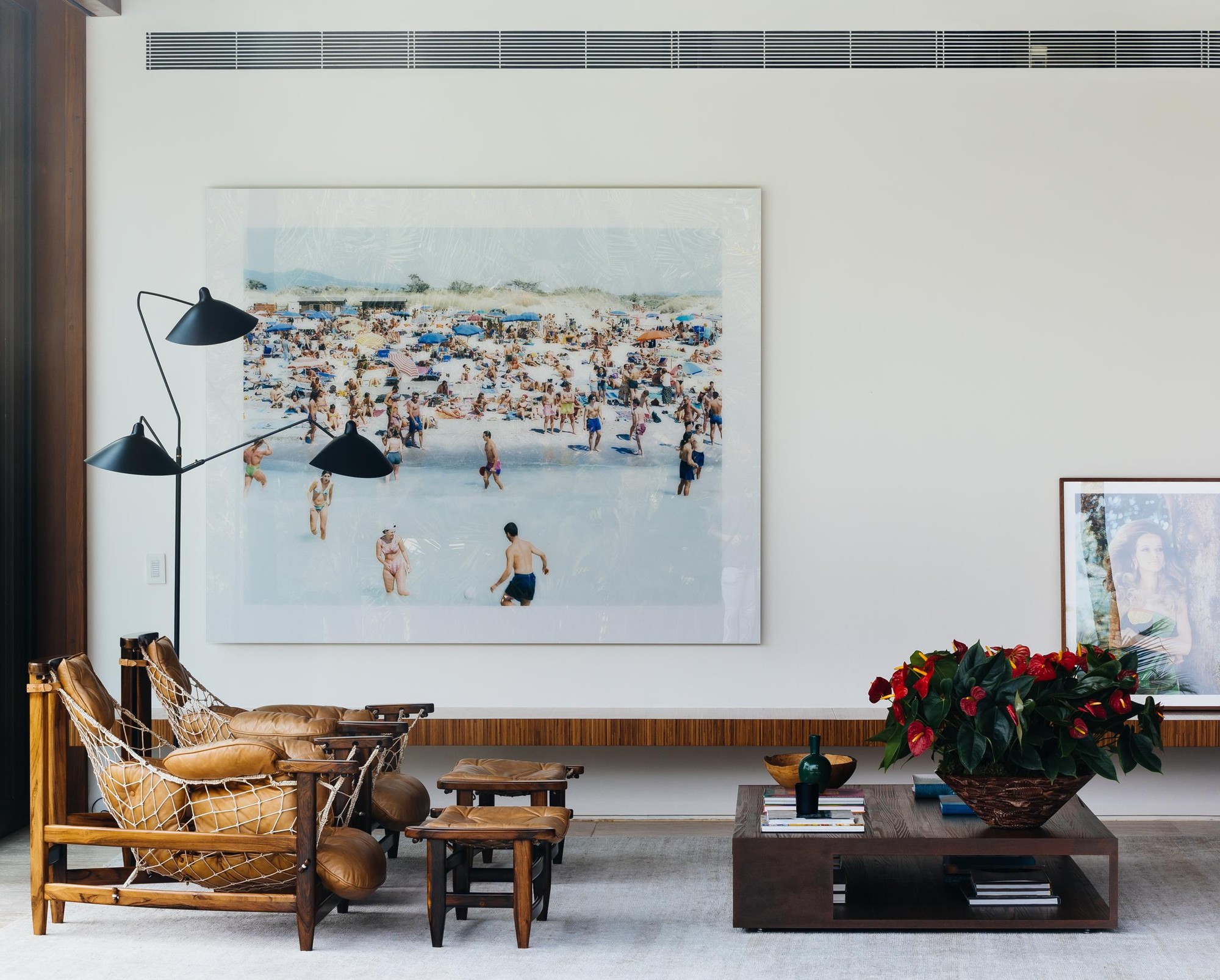 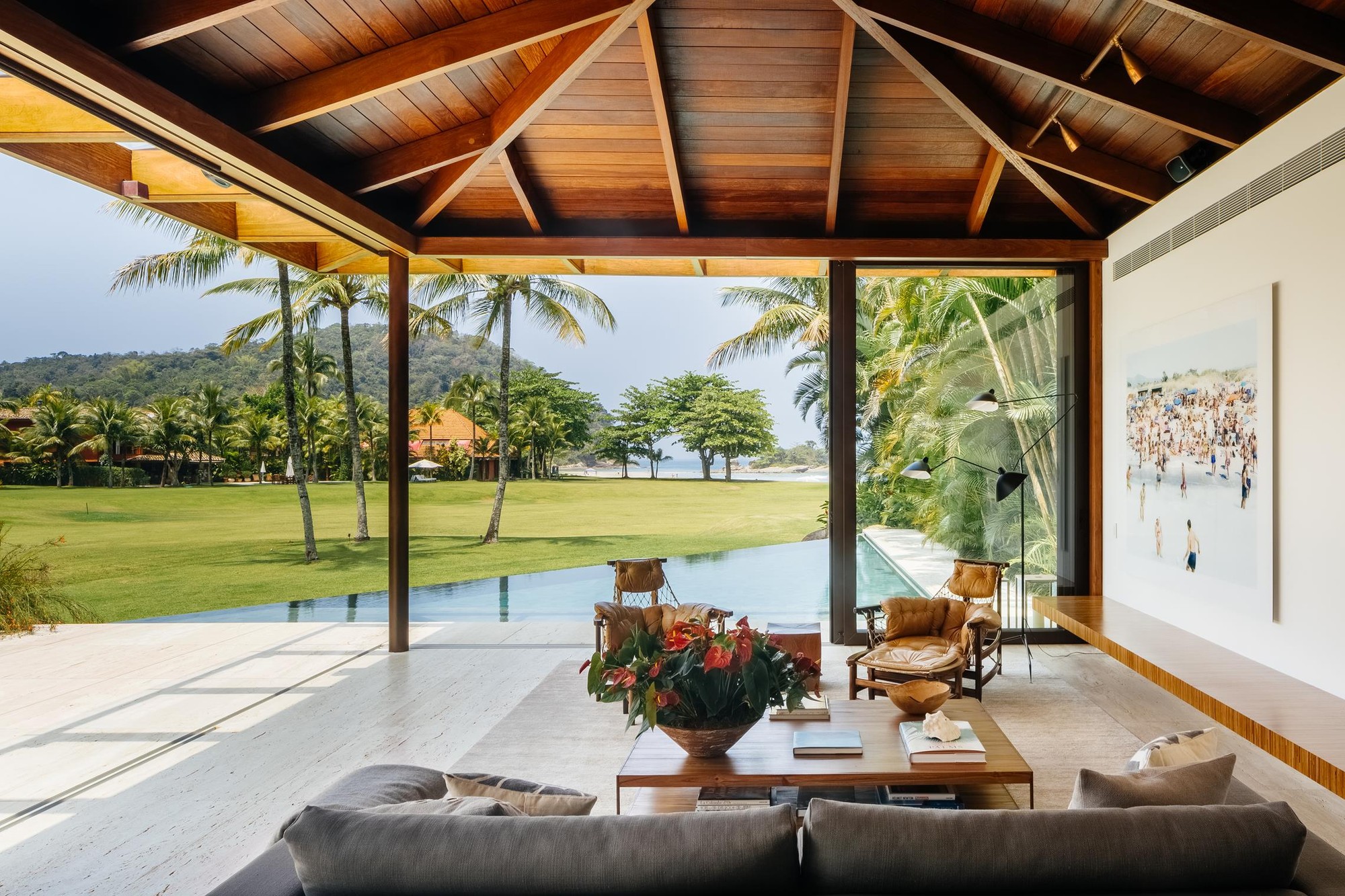 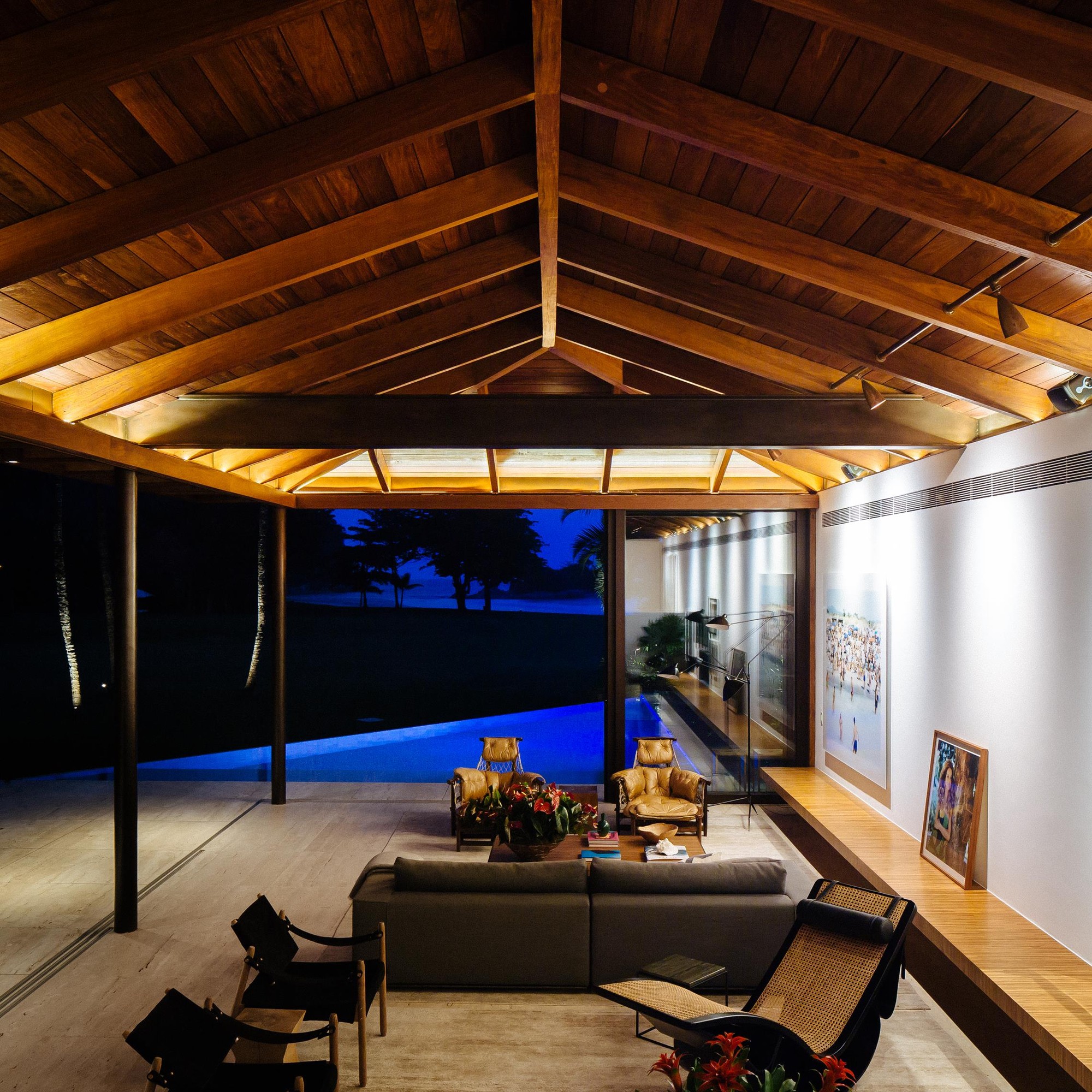 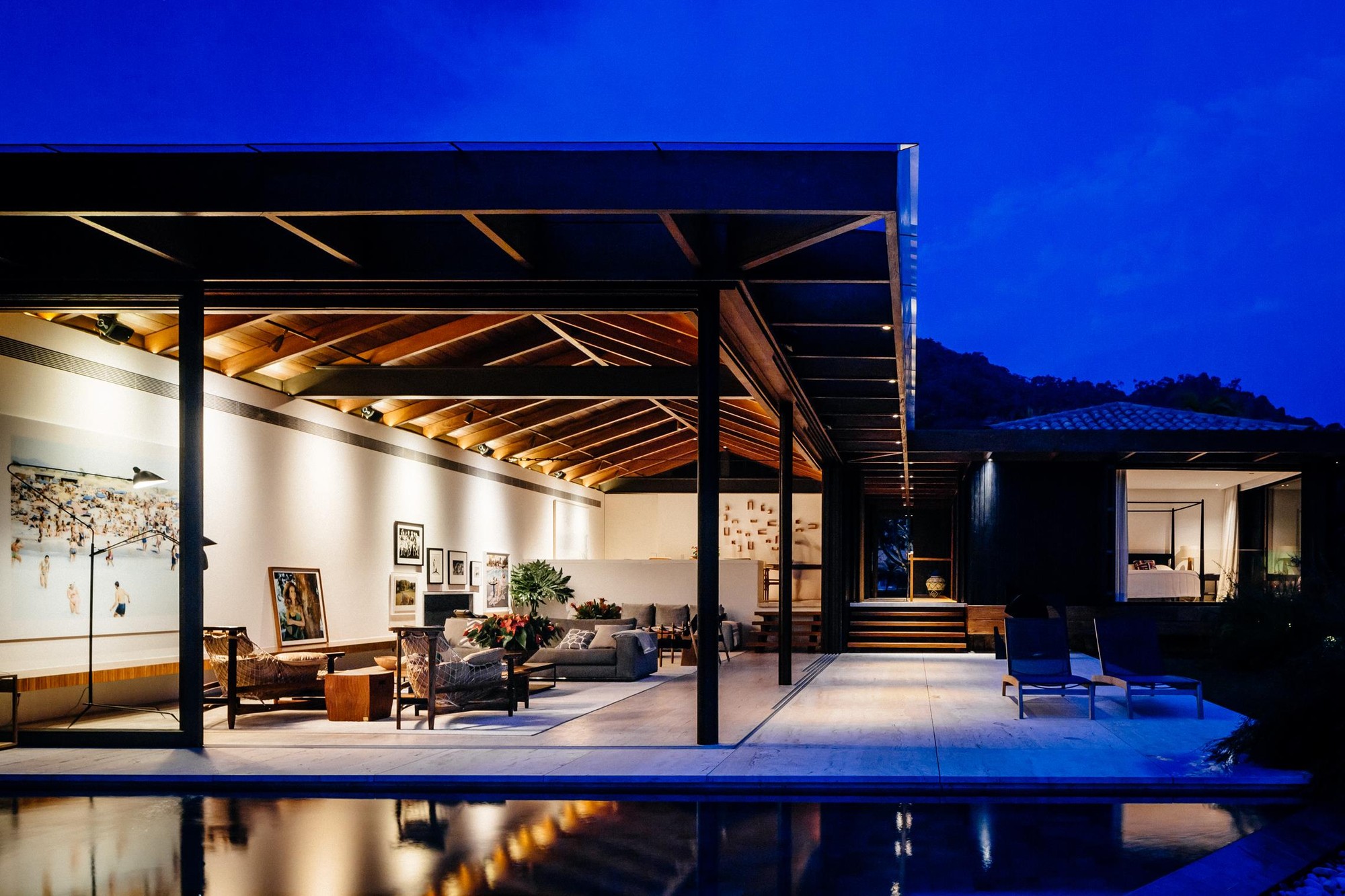 The conceptual aim of this project was to develop a house with two floors that visually appeared buried. For that, we raised the main level of he house 1.5 m, creating a lower, half buried level, yet with natural lighting and ventilation. On this floor are the service and leisure areas, such as home theater, gym and sauna.

On the access floor, social and intimate areas were divided into two rectangular volumes of similar proportions. The volumes were arranged parallel, but offset.

The blocks were joined by a roof which also forms the overhang, creating a circulation space that even if it is closed, it appears external. The living room touches the ground level again and is therefore at a higher level. On the street the building is separated from the ground, since at this point there is no lower level.

Despite the mandatory use of a sloping roof and ceramic tiles, the house seems to have a flat roof, as from the outside one can only see the wooden eaves and glass. The minimum slope we create is only visible from inside. The triangular pool has its shape determined by the boundaries of the building.

In structural terms, we use reinforced concrete for foundations and for the half-buried floor, columns and steel beams to the main floor and wooden structure for the roof.

The main finishes are charred wood and Travertine marble. 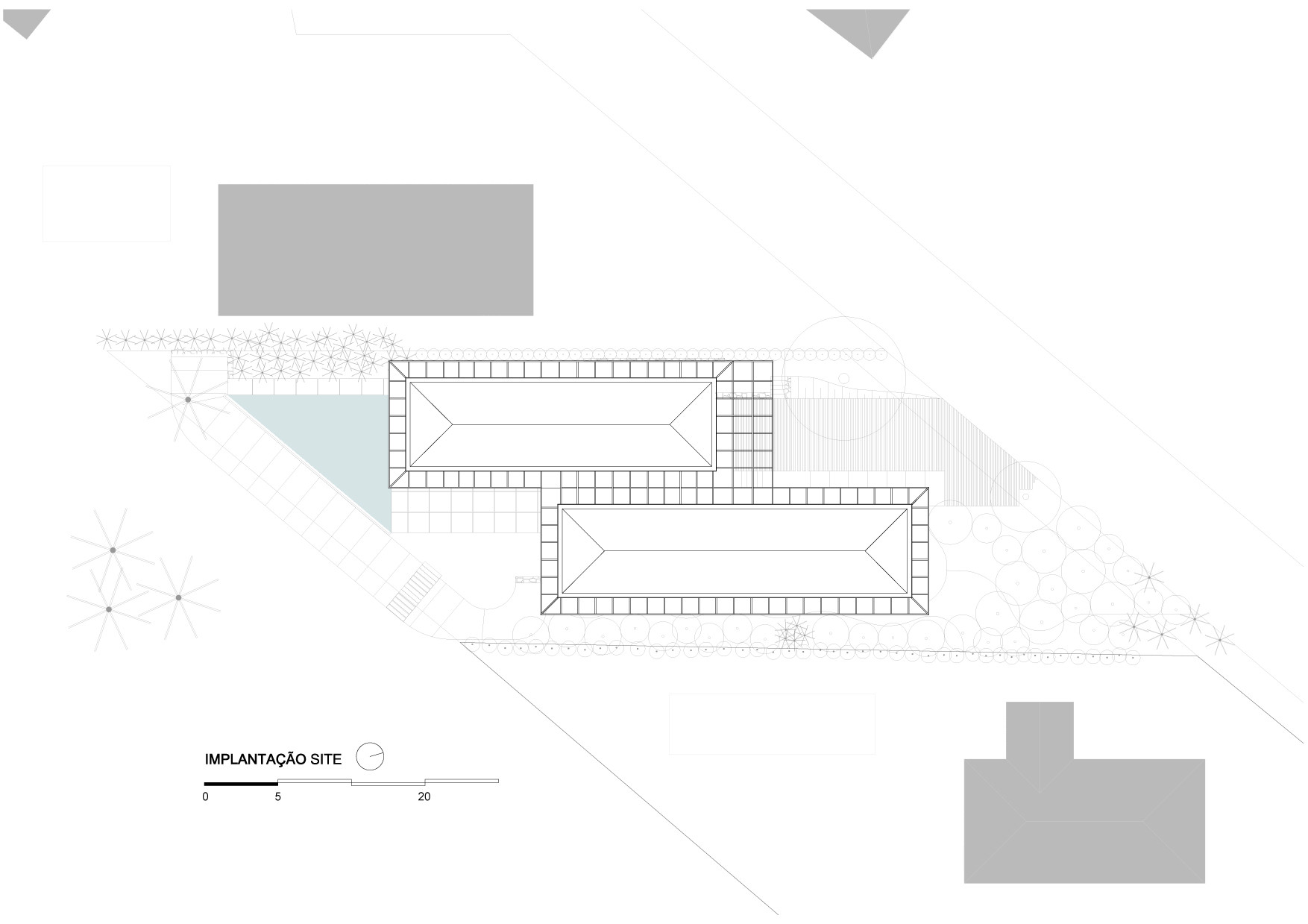 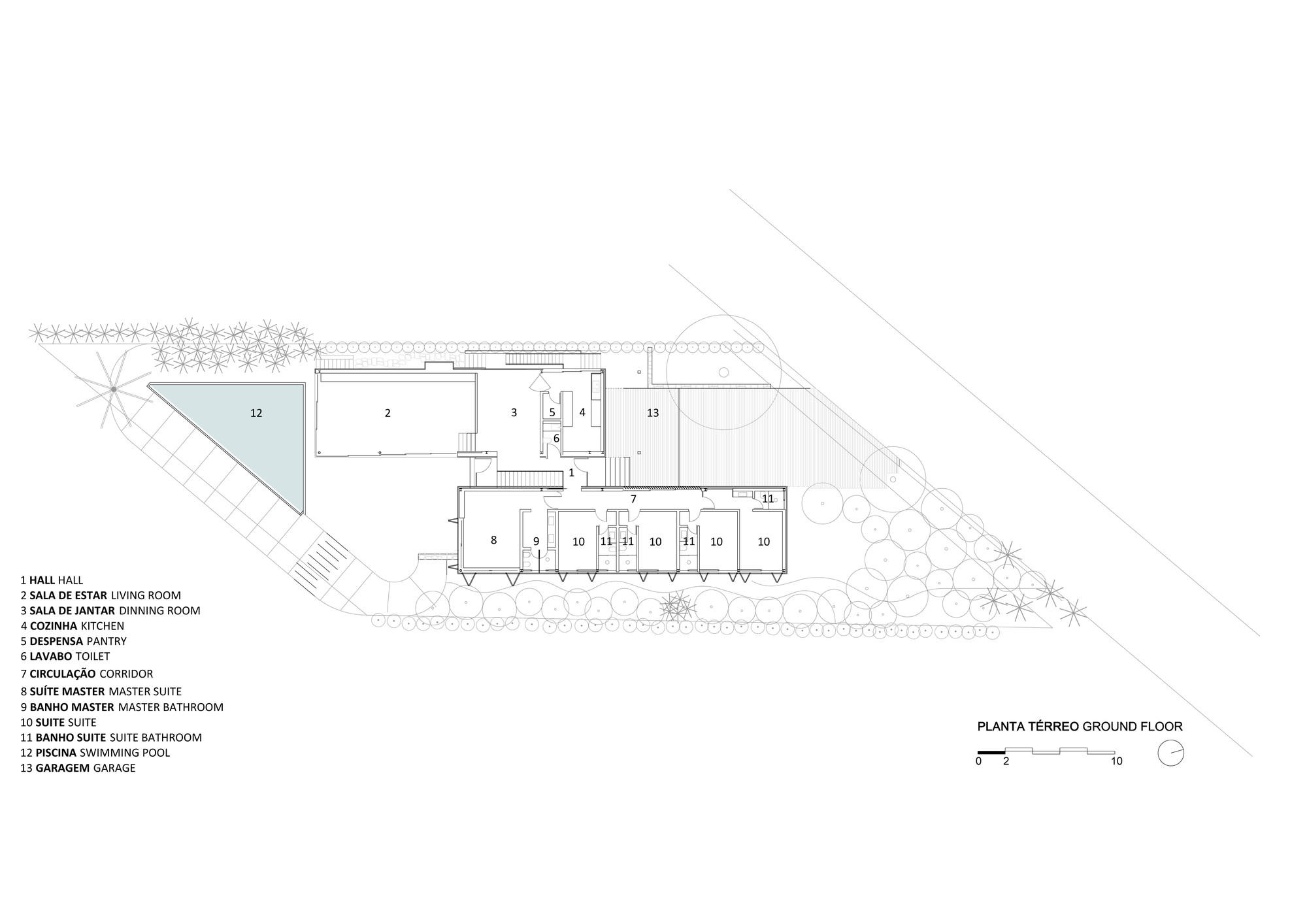