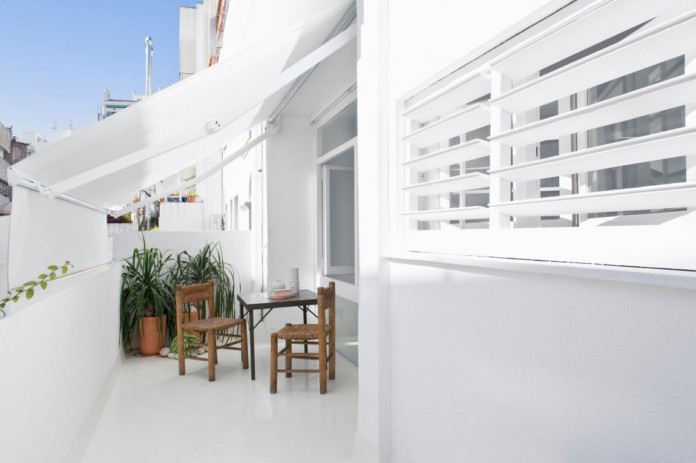 As its name suggests, the White Retreat is a predominantly white apartment that was designed in 2013 by CaSA – Colombo and Serboli Architecture. The abode gives off an atmosphere of minimalism, elegance and cleanliness, and it can be found in Sitges, Barcelona, Spain. Pretty much everything from its walls, ceilings and furnishings to its bedding and decorations come in a crisp shade of white, but there are a few exceptions that balance the cold appearance and bring a subtle yet welcomed warm touch. 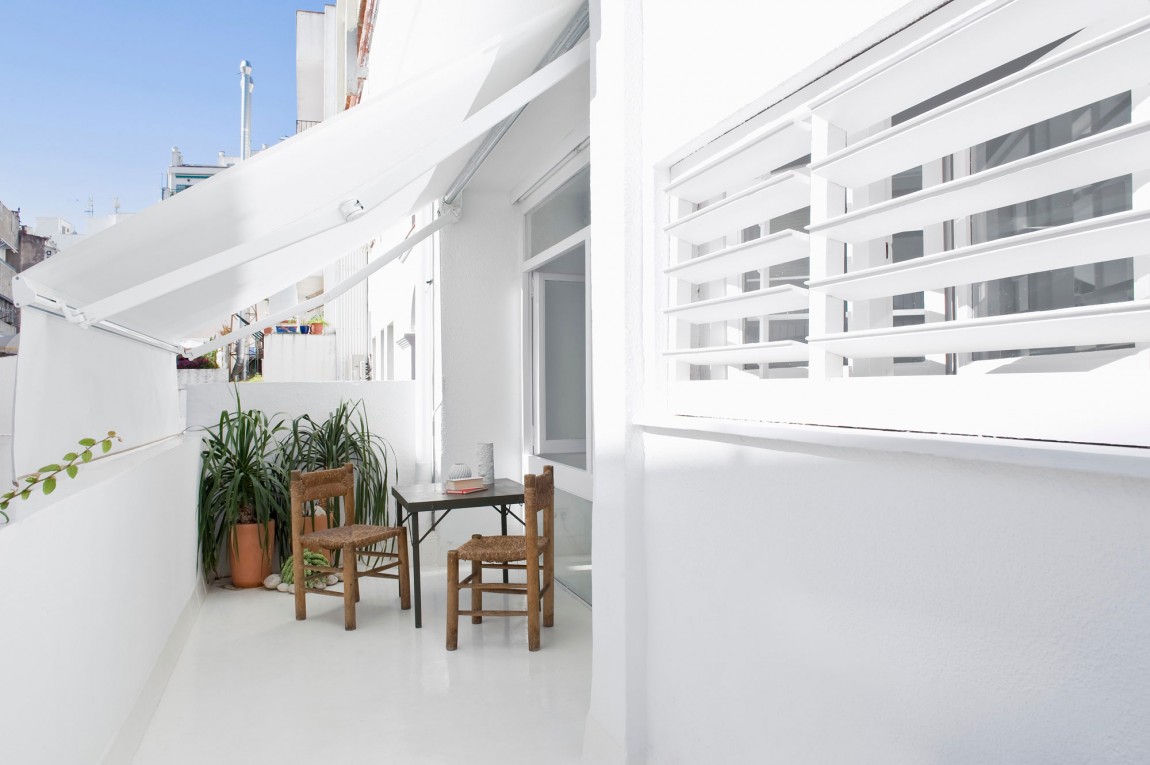 For example, the lighting in the bathroom and above the kitchen sink has a yellow hue, while the balcony features rustic brown chairs as well as natural green plants. The bathroom does not have a door, and it flaunts white mosaic tiles as well as modern appliances. The cooking/eating area, the sleeping area and the lounging area are all a part of the same room, which leads us to believe that this is not the most spacious apartment in Sitges. It is unique, modern and comfortable, though. And that’s what really matters in the end, don’t you agree? 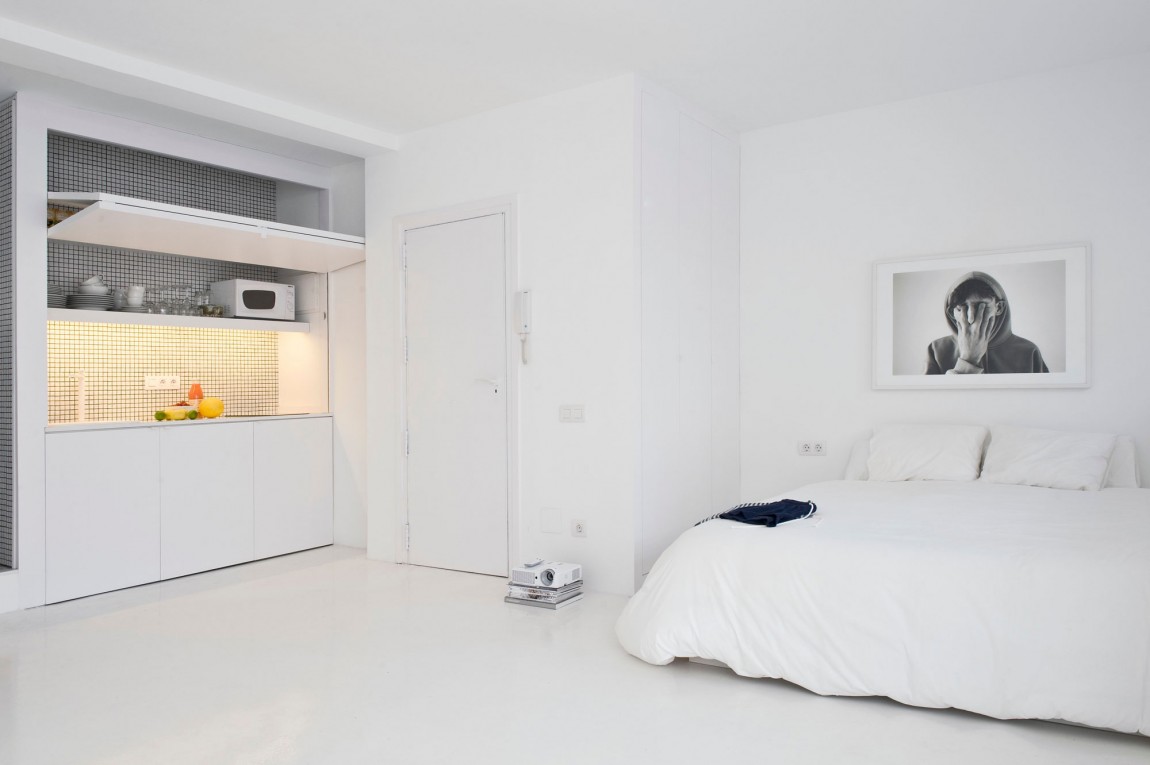 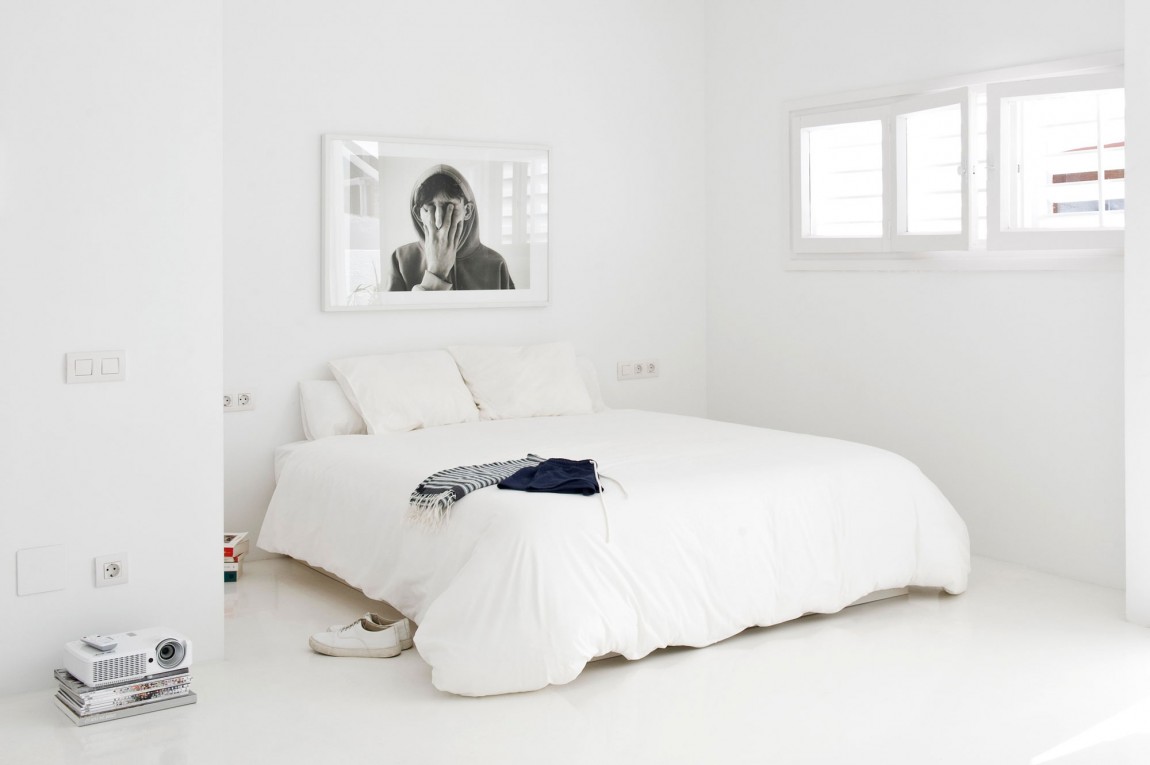 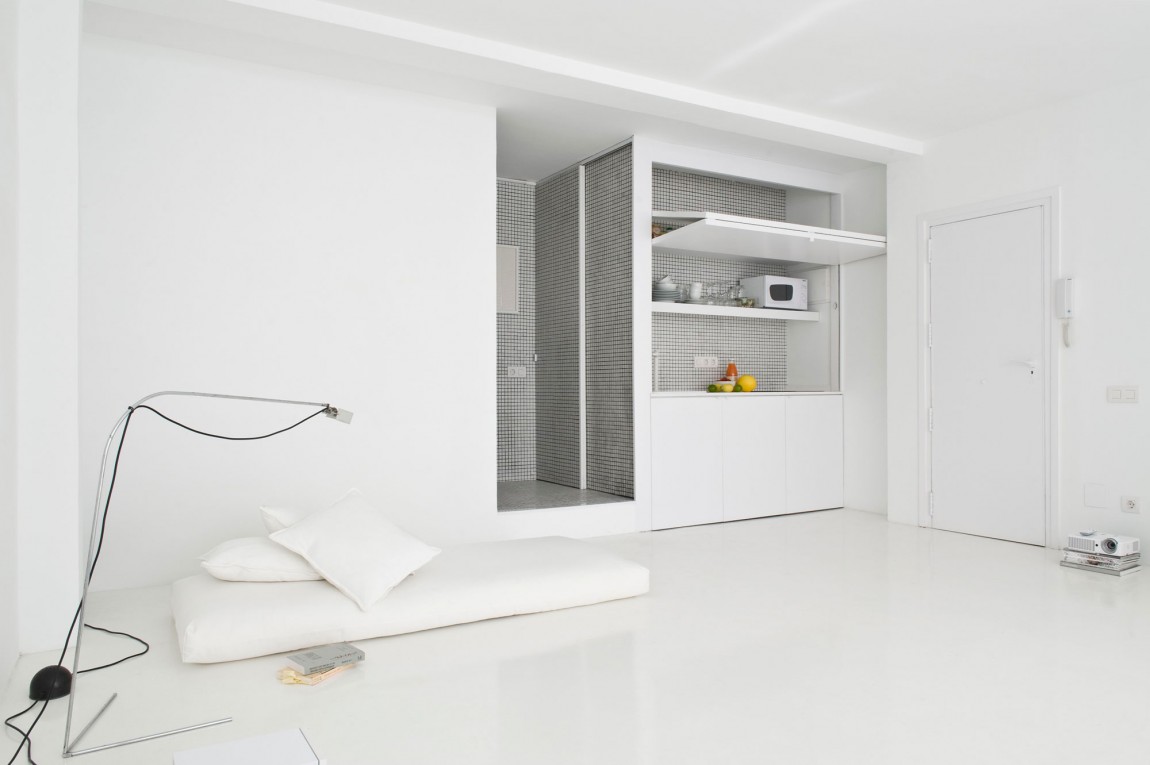 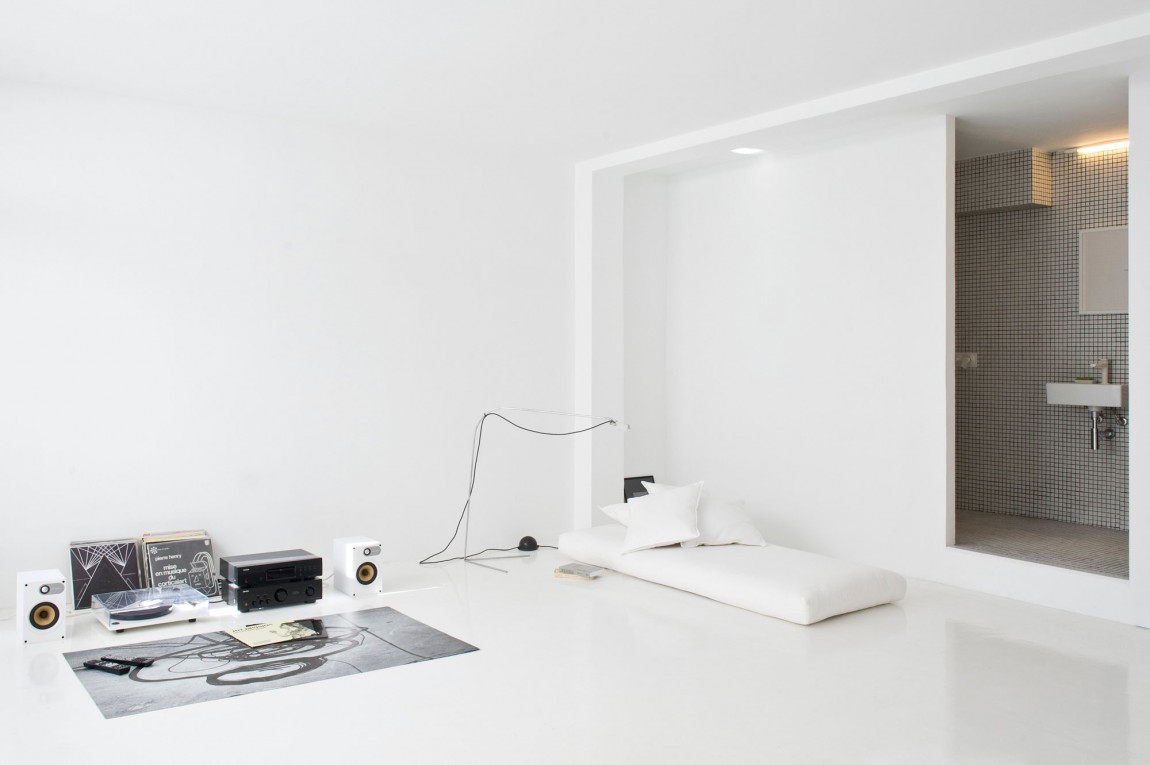 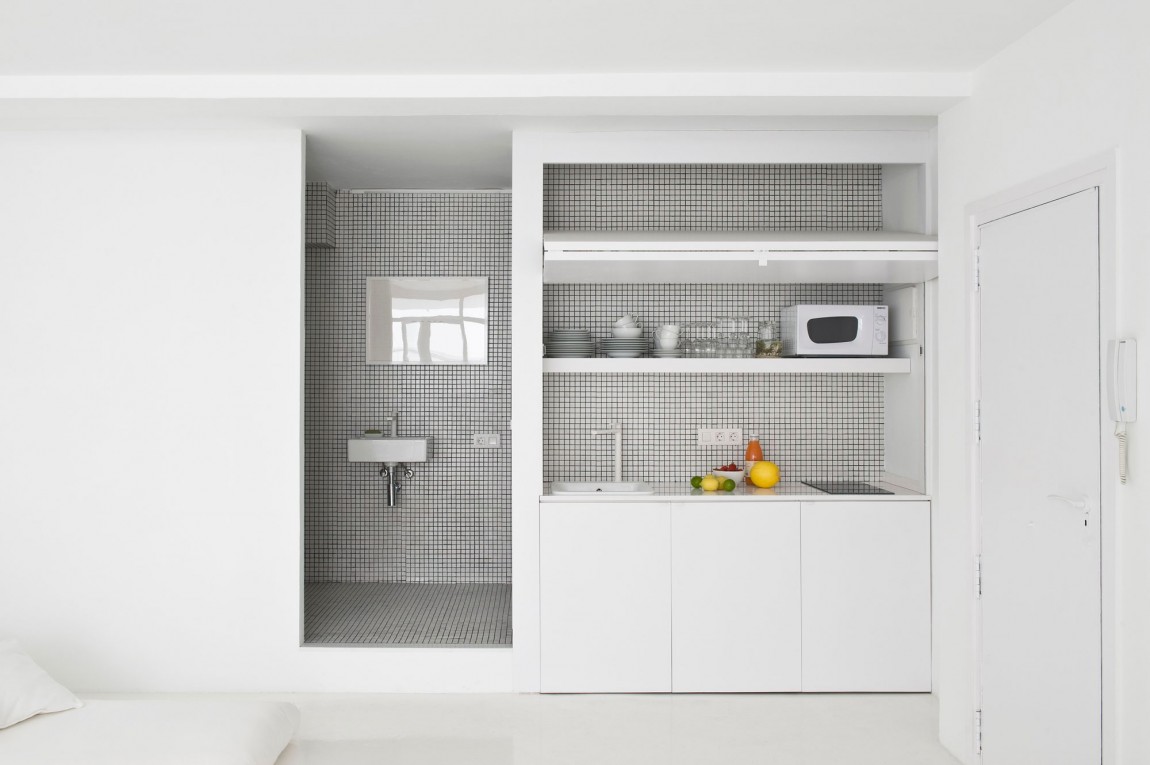 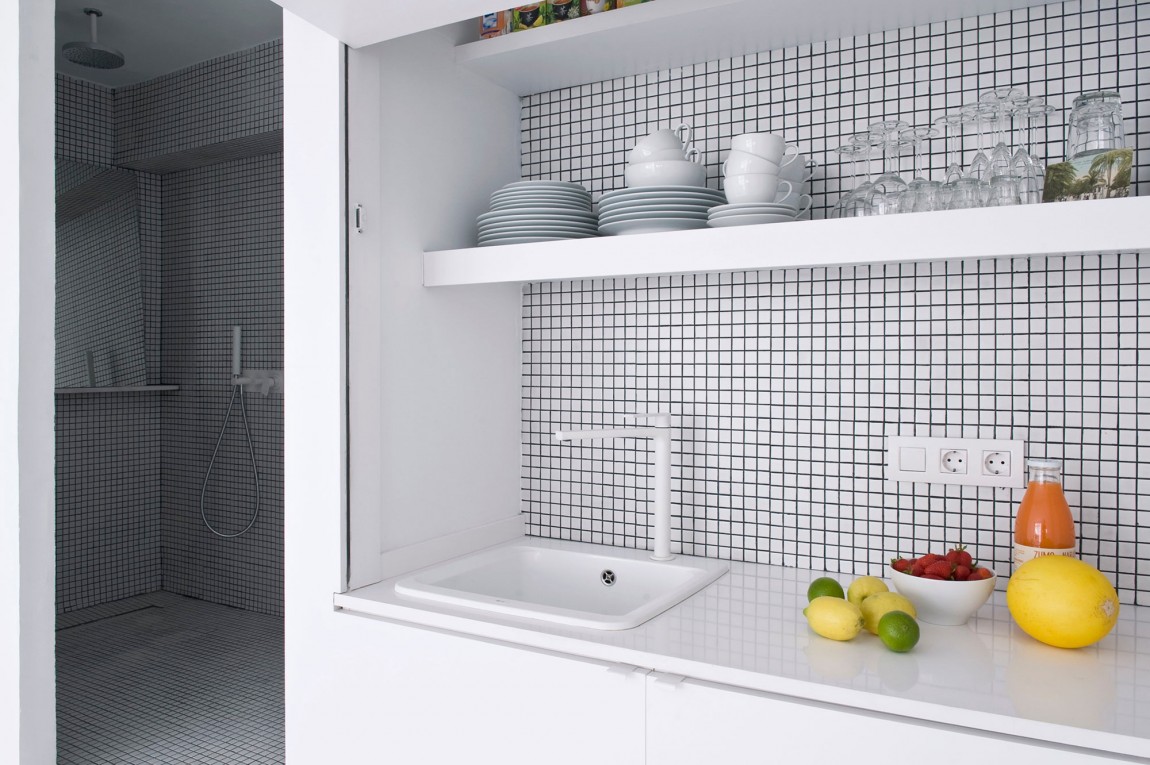 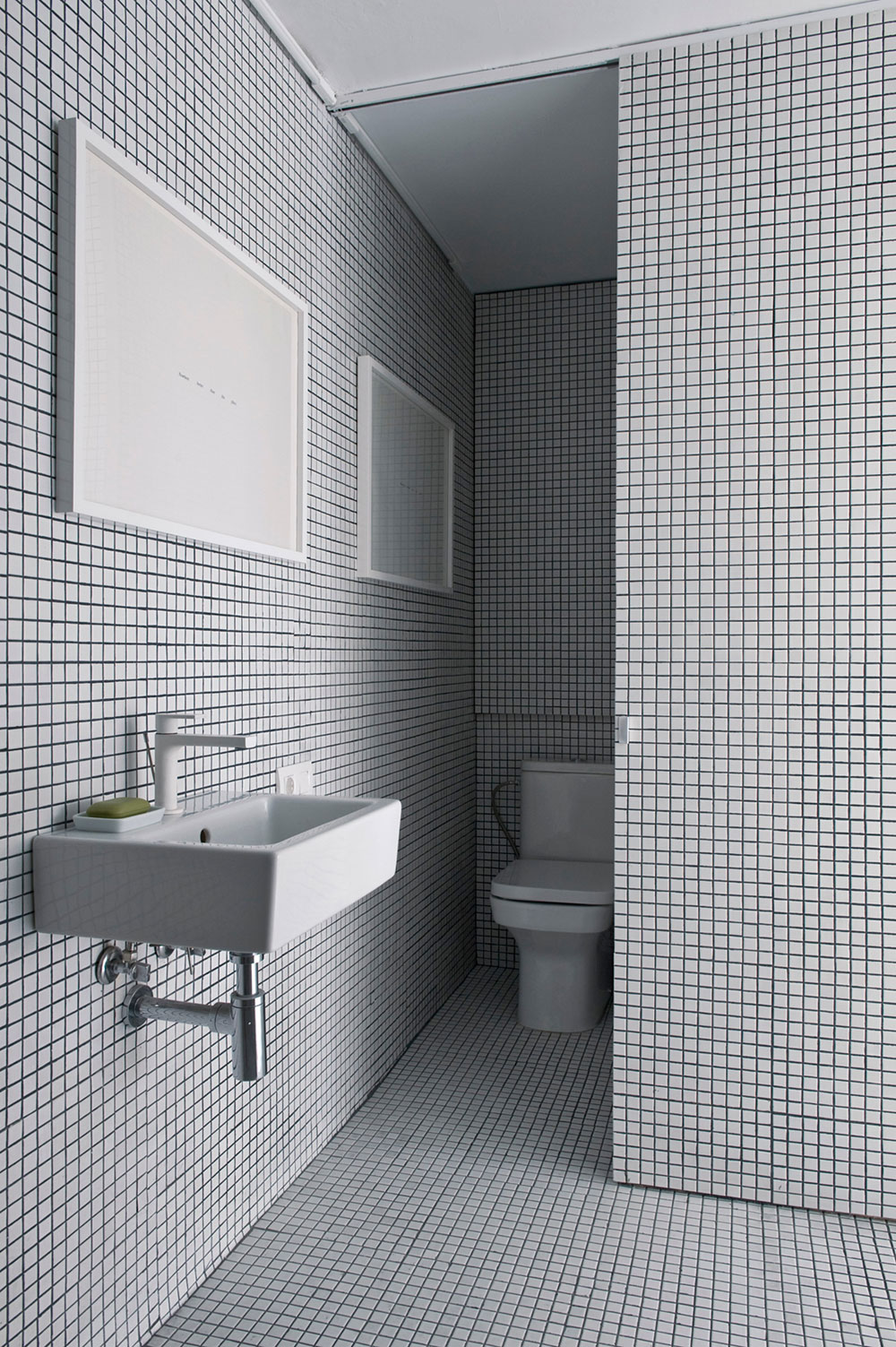 The renovation of this 36 square meters (387.5 square feet) apartment came with a defined brief. The client, a French Art historian and curator, professor at the Sorbonne University, came to us with very clear ideas for his small property. The apartment, located in the city centre of the coast town of Sitges (a few steps from the beach) is completely introverted, facing only an interior courtyard. The lack of views is compensated by silence and light.

The client envisioned a peaceful, open and essential space, furnished with a few carefully selected objects; contemporary artworks, some books, and his records. In sum, a peaceful place for introspection, flooded with light. An extremely reduced budget asked for simple, inexpensive solutions The space is conceived through three different blocks: the bathroom/kitchen block, the living/bedroom one and the third, external, the terrace. The last two are extremely permeable, only divided by a large window and a long, oversized louvers one on the bedroom side, both existing elements that were preserved. The big opening connects a small terrace (11 square meters), unified with the interiors through the use of the continuous white resin flooring and a blank parasol that provides privacy while diffusing the daylight. Indoor and outdoor are therefore connected as a continuous living space.

The Quaderna table (Superstudio 1970), a piece our client desired to incorporate since the project started, inspired the tiles that clad bathroom/kitchen block. The white matt 3x3cm tiles reproduce the table’s grid and are the only texture allowed in the whole project. This block is connected with the living/bedroom area through an opening that reveals the tiles used inside the bathroom. The same texture was also used inside the kitchen unit, creating a continuous spatial sequence through the consistency of texture, which appears once opened its horizontal bookdoor.

The tiles also disguise the sliding door that leads to the toilet. All containers, such as in the kitchen unit and the closet in the bedroom area, are carefully hidden through the use of white doors. We took our client’s desire of an all-white space quite literally, to the extreme of choosing this colour for the kitchn sink and all the streamlined taps of kitchen, wash hand basin and shower are matt white (Via Manzoni series by Gessi).

All the lighting has been solved through the use of florescent tubes, hidden into the kitchen shelves or displayed like in the bathroom. A line of florescent light suspended on the window frame dividing living and terrace illuminates the indoor and the outdoor space, unifying them.

On the outer face of the terrace balustrade, a bright, evergreen, large climber plant covers the wall, defining the threshold of the white space of the project.

The apartment is brought to life through the pieces the client chose. French artist Fabrice Hiber, of which our client is curator, is to perform a graphic piece on one of the walls of the living. A Daniel Riera photo is upon the bed head. Two prints by Cuban artist Félix González-Torres (with the writings “Somewhere Better Then This Place” e “Nowhere Better Then This Place”) are on the bathroom wall. A Hedi Slimane photo, sandwiched in plexiglass became the music table.

Next to it, a Muji sofa, futon-like, rigorously white. A military camp table that collapse to form a briefcase and two interweaved raffia wooden chairs from the ’60 furnish the terrace. 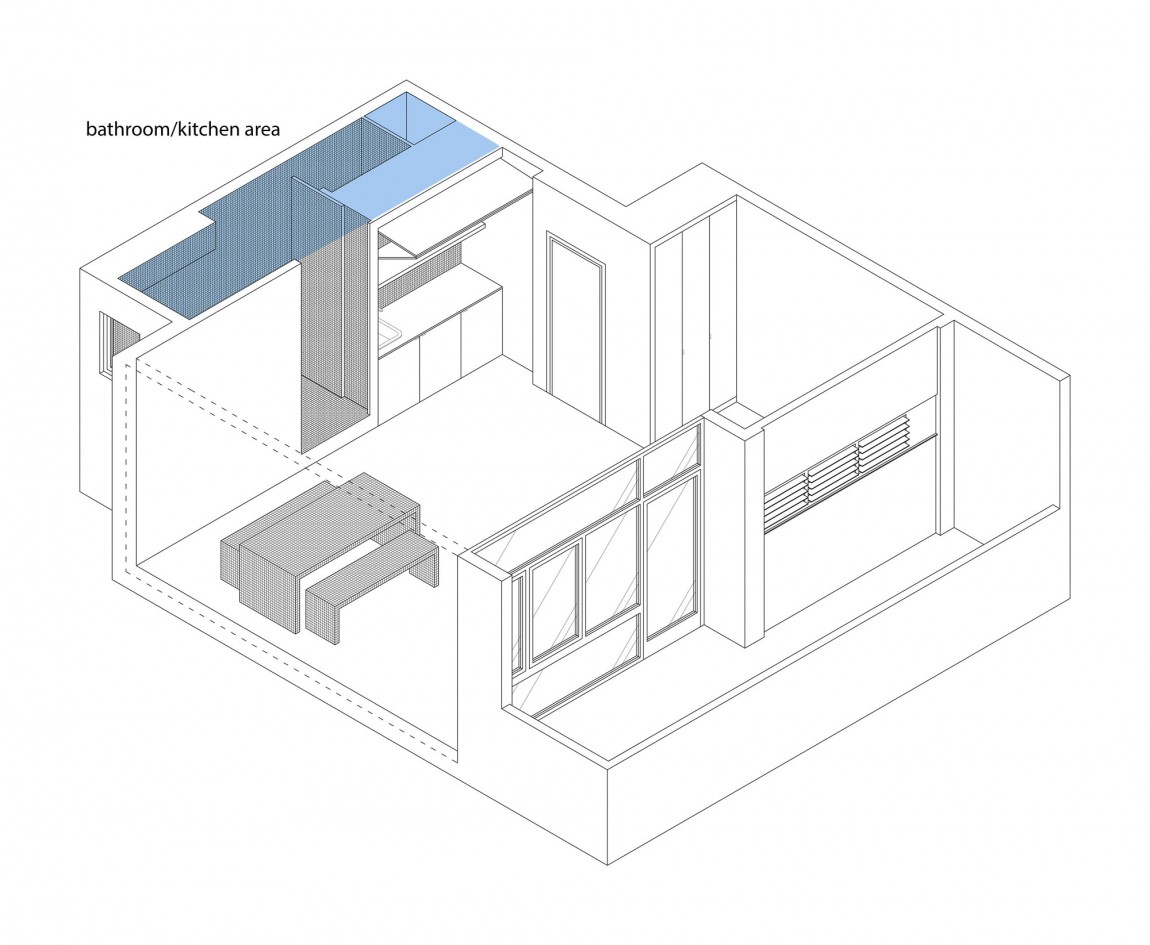 Opulent Residence in LA With Interiors by Marc Canadell