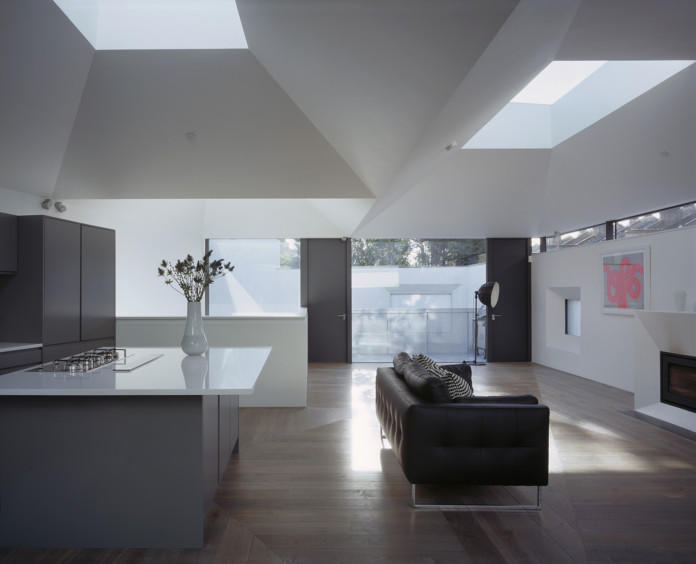 Designed by vPPR and completed in 2015 in London, the Vaulted House is a brand new four-bedroom family house that sits on an infill site behind a garage door within London’s Hammersmith district. The building used to be a taxi garage that became contaminated with diesel, but it is now a modern and welcoming residence that ensures irreproachable living conditions. As its name suggests, the building flaunts a series of vaulted roofs that mark the various living areas on the upper-ground floor. The roofs boast skylights that allow natural light to enter these living areas, and they are covered with a chequered pattern made out of single-ply membrane. 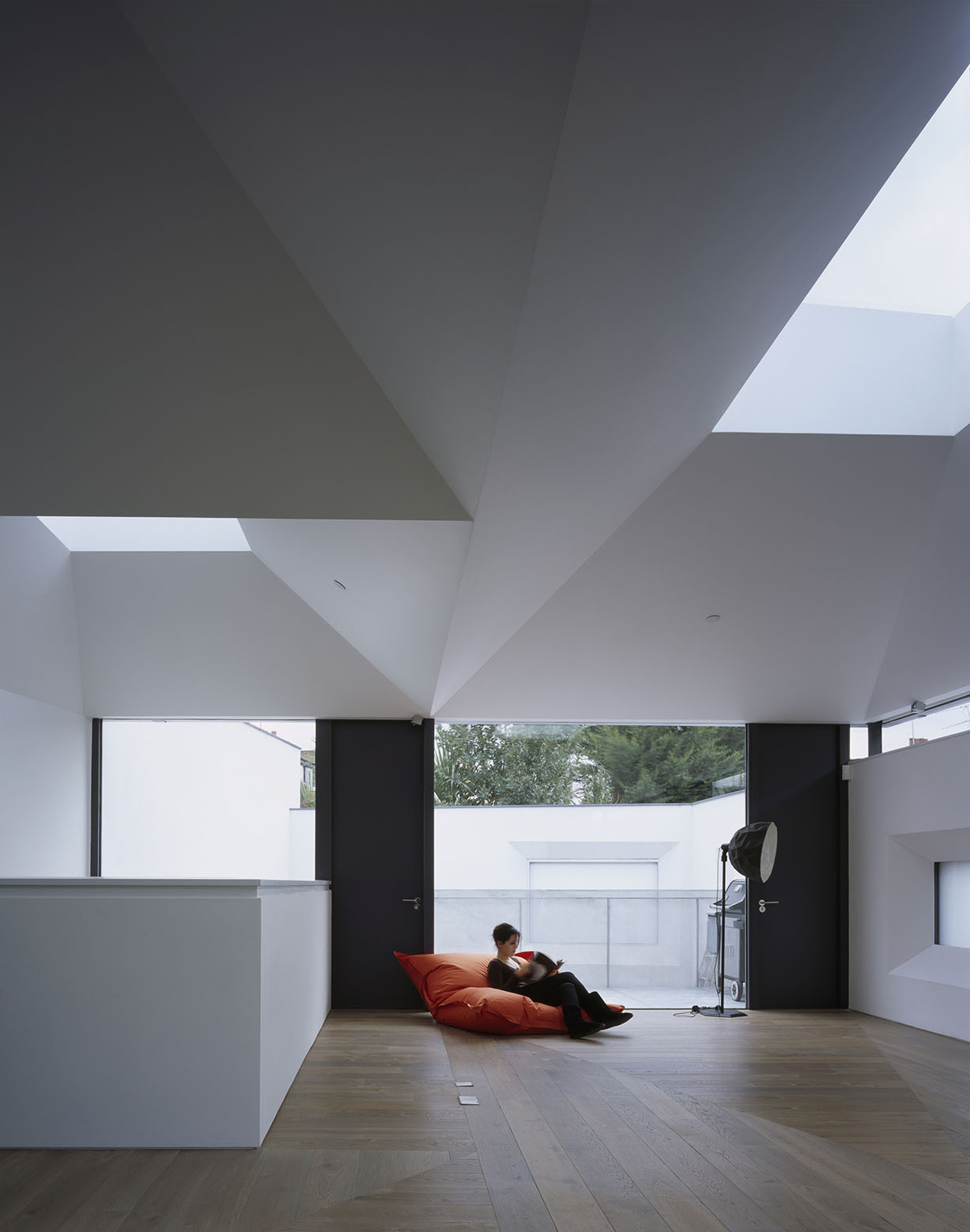 The project comprises a double-height den that benefits from access to a garden at the rear. The garden can be used for relaxation and socialization, but it mostly acts as a playground for children. As far as sustainability is concerned, a mechanical heat exchange system complemented by thick insulation ensures that the indoor temperature is always comfortable during the cold season. Moreover, the entryway is stepped in order to comply with local flood requirements, but the steps are wide and quite easy to climb.
The roof of the Valuted House was modeled using 3D software and was created using plywood and timber joists covered with insulation and single-ply membrane. 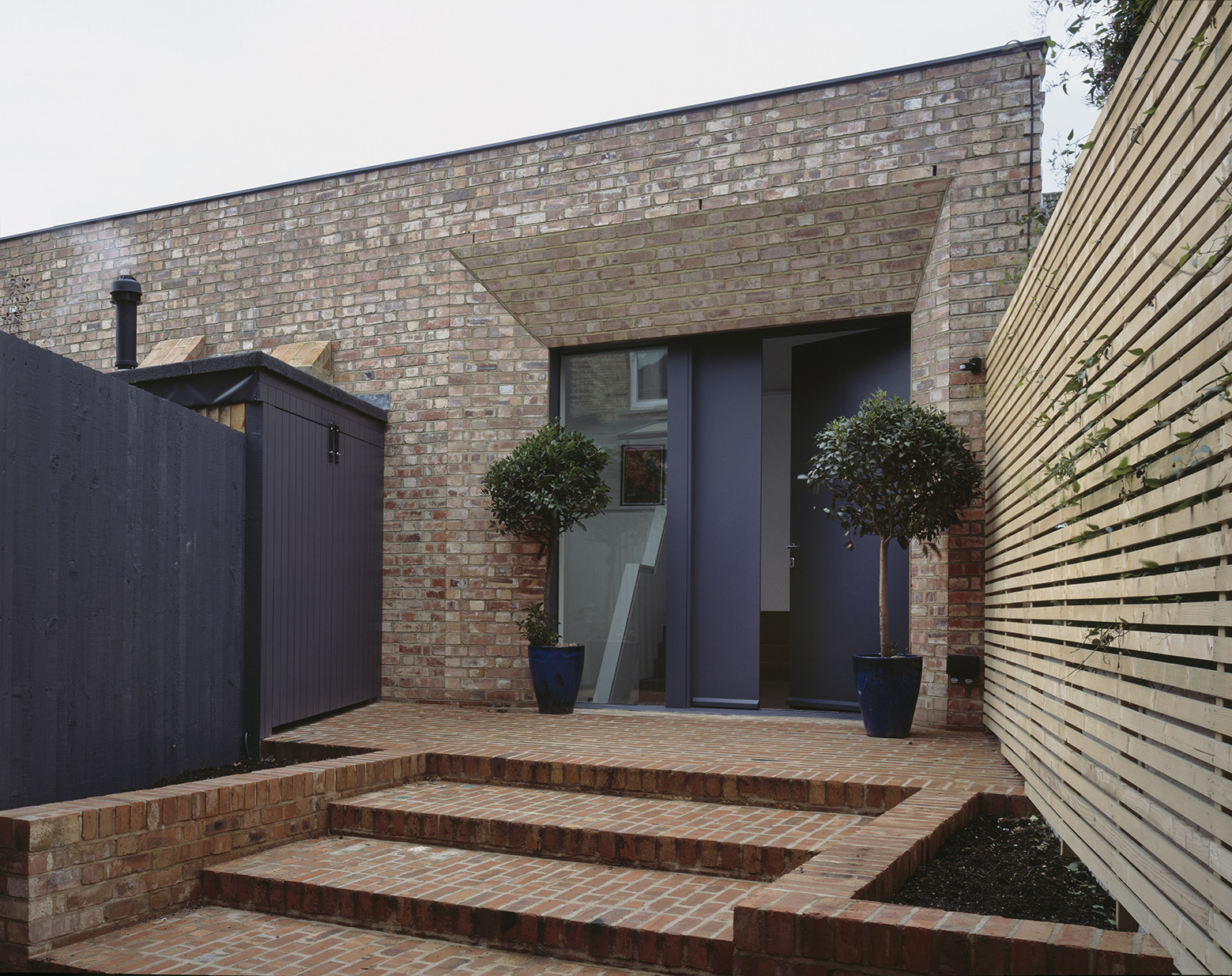 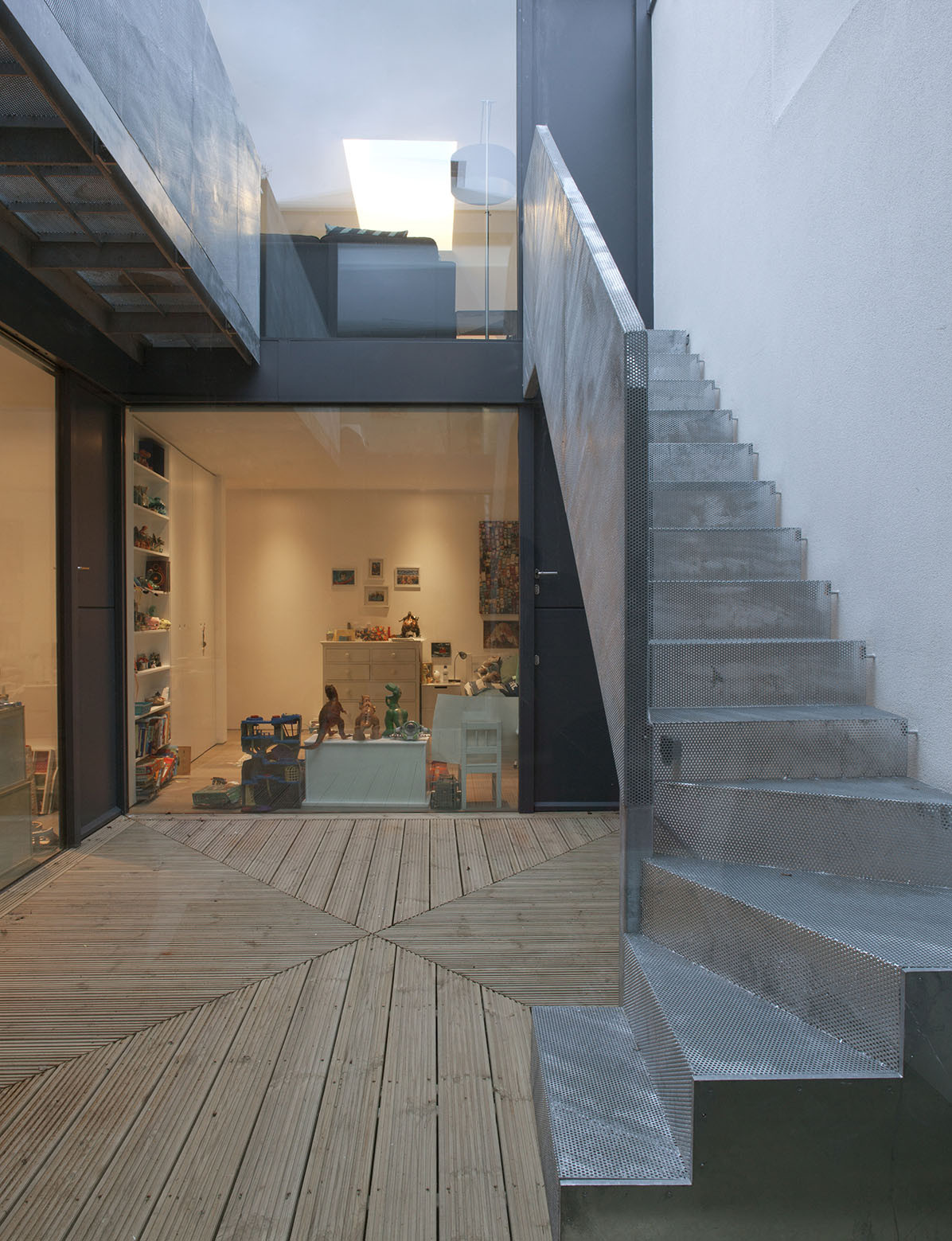 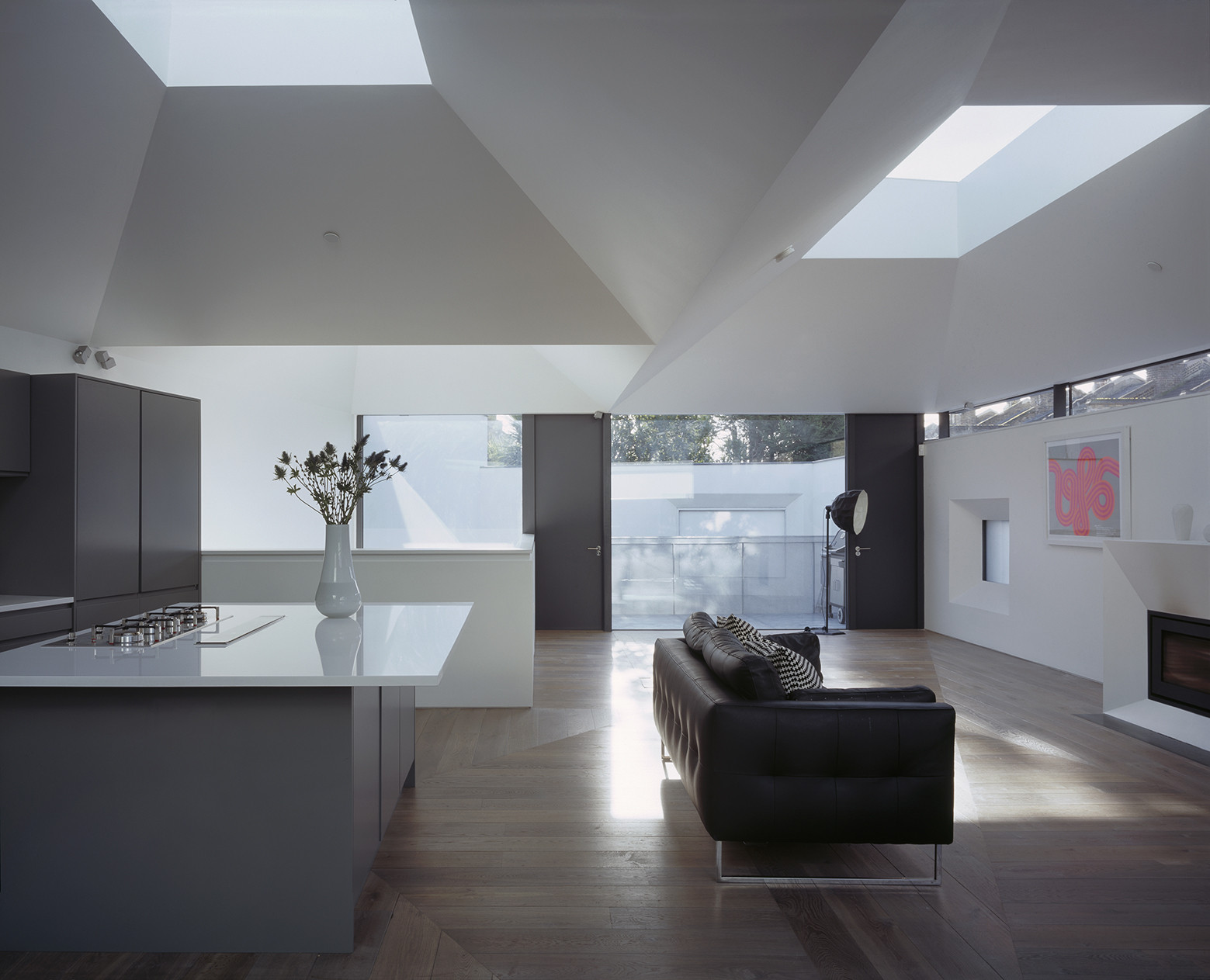 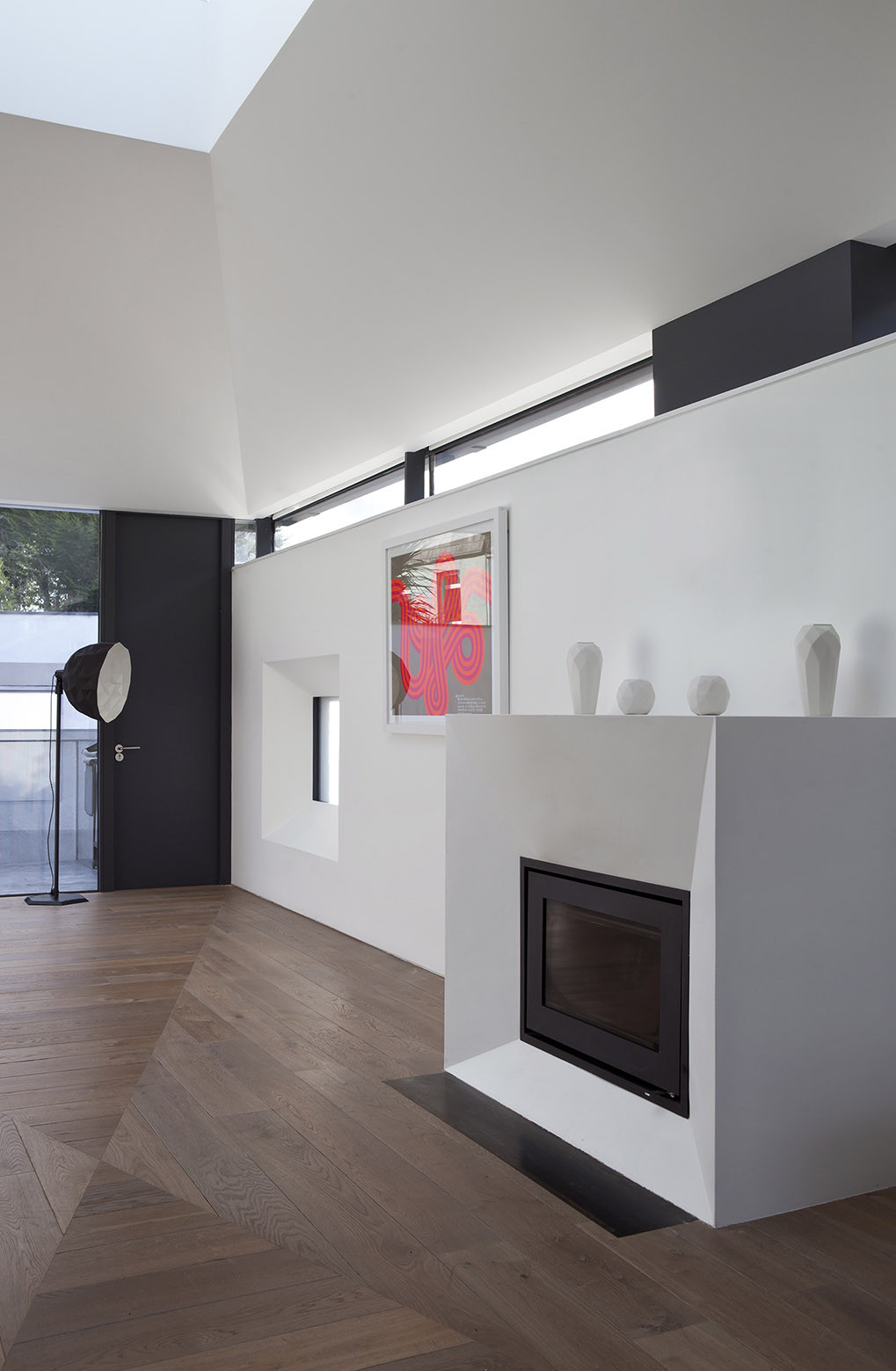 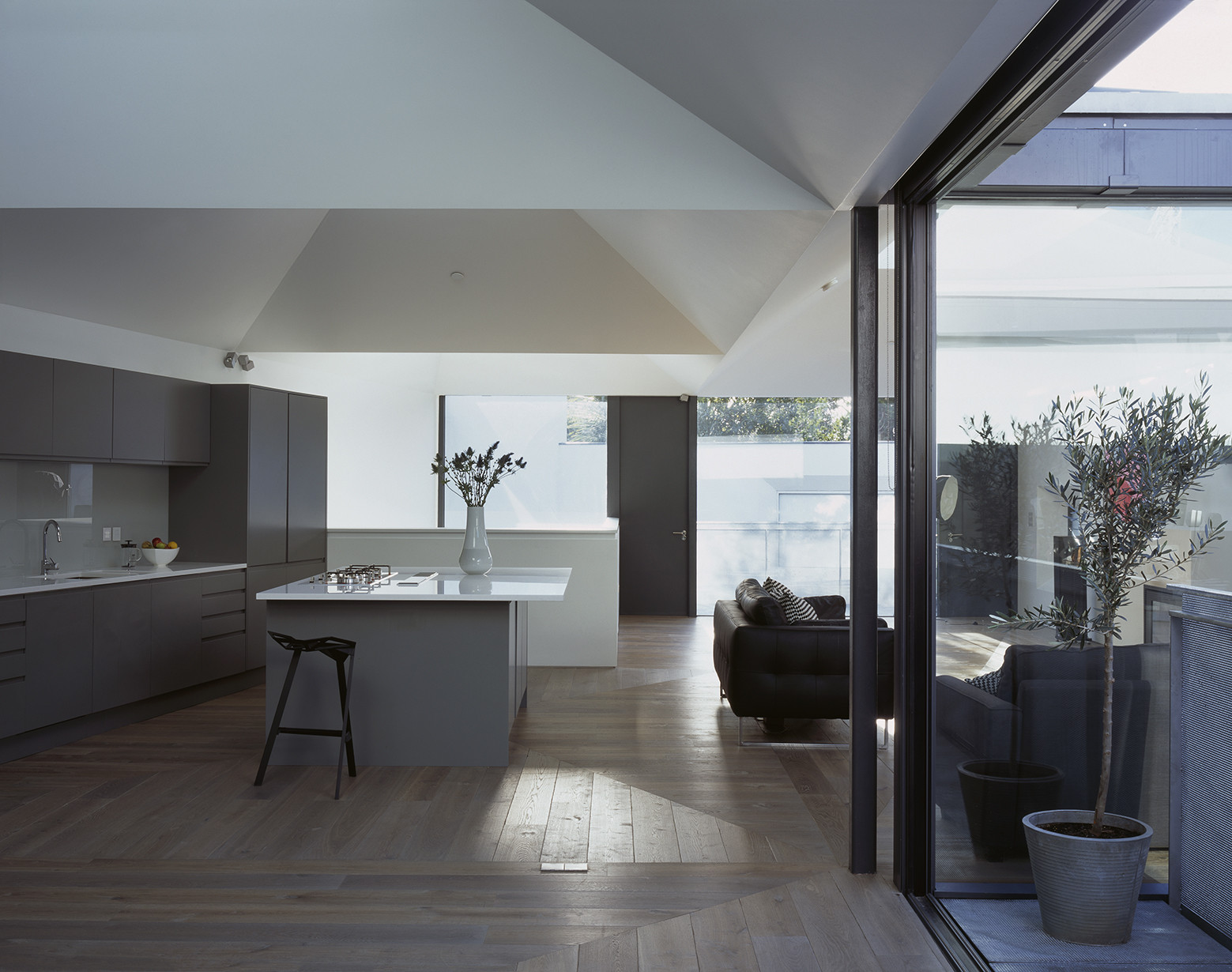 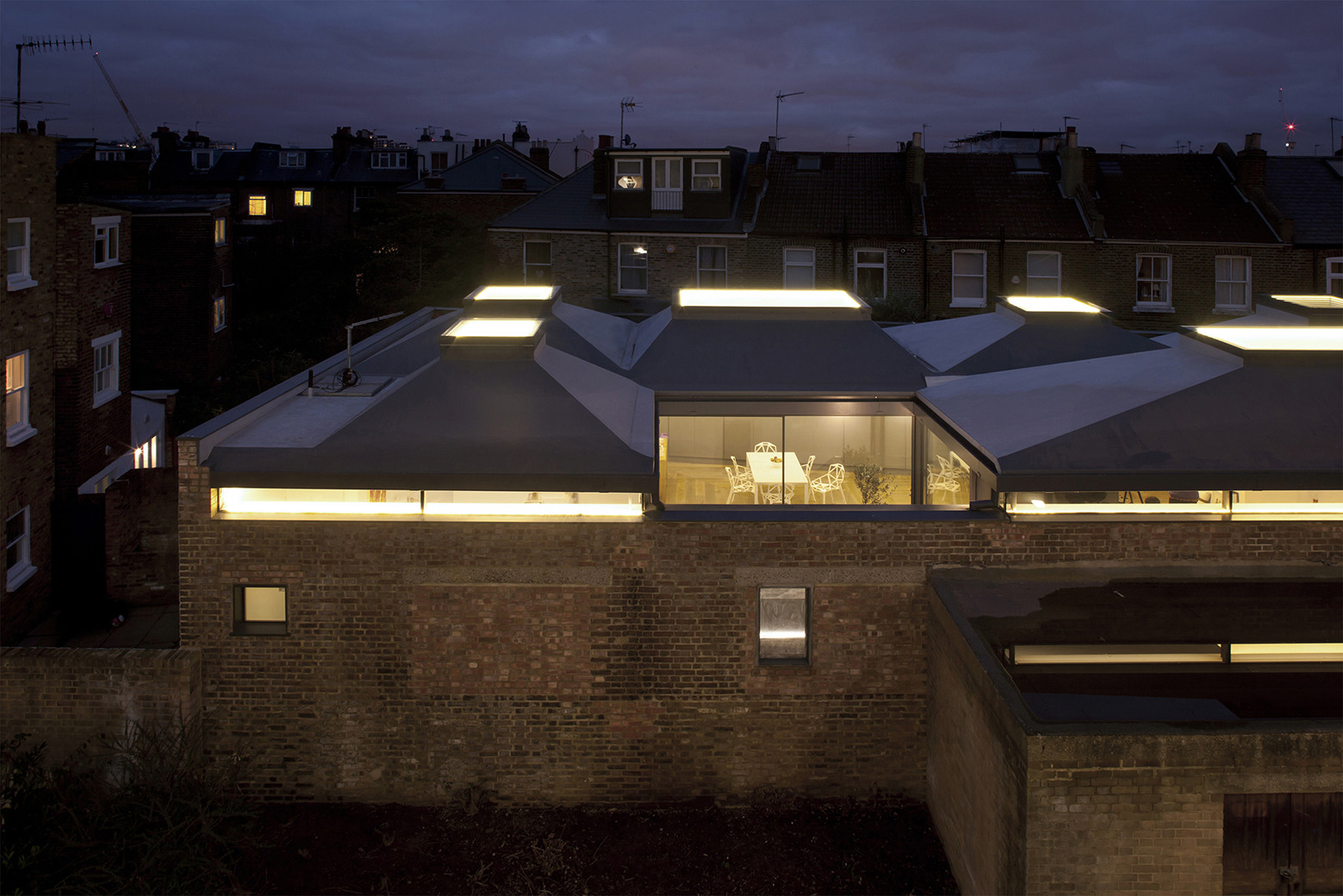 Vaulted House is a new-build four-bedroom family house, located on an infill site, hidden behind a garage door in Hammersmith. It was previously a diesel contaminated taxi garage, surrounded by 11 party walls and overlooked by 24 neighbours. A series of sharply detailed vaulted roofs define different living zones on the open upper-ground floor. Roof-lights at the top of each vault flood the landlocked site with daylight. Large courtyards bring light into the bedrooms on the lower-ground floor. The roofs are covered in a striking chequered pattern of single-ply membrane. The vault geometry repeats in details of the house, including the fireplace, floors, windows and entrance.

A double-height den has access to the garden at the back for the children to play in. A separate study provides acoustic privacy with a view through to the living space. A big double-sliding pocket door opens up completely, turning the dining room into a loggia in the summer.

Several of the 24 neighbours included active members of the Brackenbury Residents’ Association. Detailed residents’ consultations and the incorporation of their feedback into the design led to seven letters of support for the scheme at planning.

The vaulted roofs are covered with two tones of single-ply roofing membrane to produce a harlequin pattern, breaking up the large area of roof and greatly improving the outlook, which was previously onto rotten asphalt roofs. Inside the house, the vaults meet at sharp plastered edges, concealing the down-stand beams rather than expressing them. Vault-like elements are repeated obsessively at each scale of the design, forming sculptural chamfered edges to the windows, fireplace and TV wall. The timber floors are laid in a cross pattern that reflects the vaults above them.

A mechanical heat exchange system and thick insulation make for an energy efficient home. A study allows for working from home or can become a spare bedroom for elderly relatives visiting. The entrance is stepped up to meet flood requirements but these are wide and gentle for ease of access.

The site is a former taxi garage and was designated as contaminated land. All 1.5m of excavated soil had to be tested and carefully disposed of. The garden walls are underpinned rather than demolished. A steel and timber frame spans off the existing walls to create the roof and floor structure. The roof is constructed from plywood over timber joists, covered with insulation and single-ply membrane. The geometry of the roof appears simple but is in fact incredibly complicated. It was modeled in 3D software, which enabled precise back and forth between consultants to ensure that the huge steel beams were completely hidden in the crisp angled finishes inside and by the roof finishes outside. 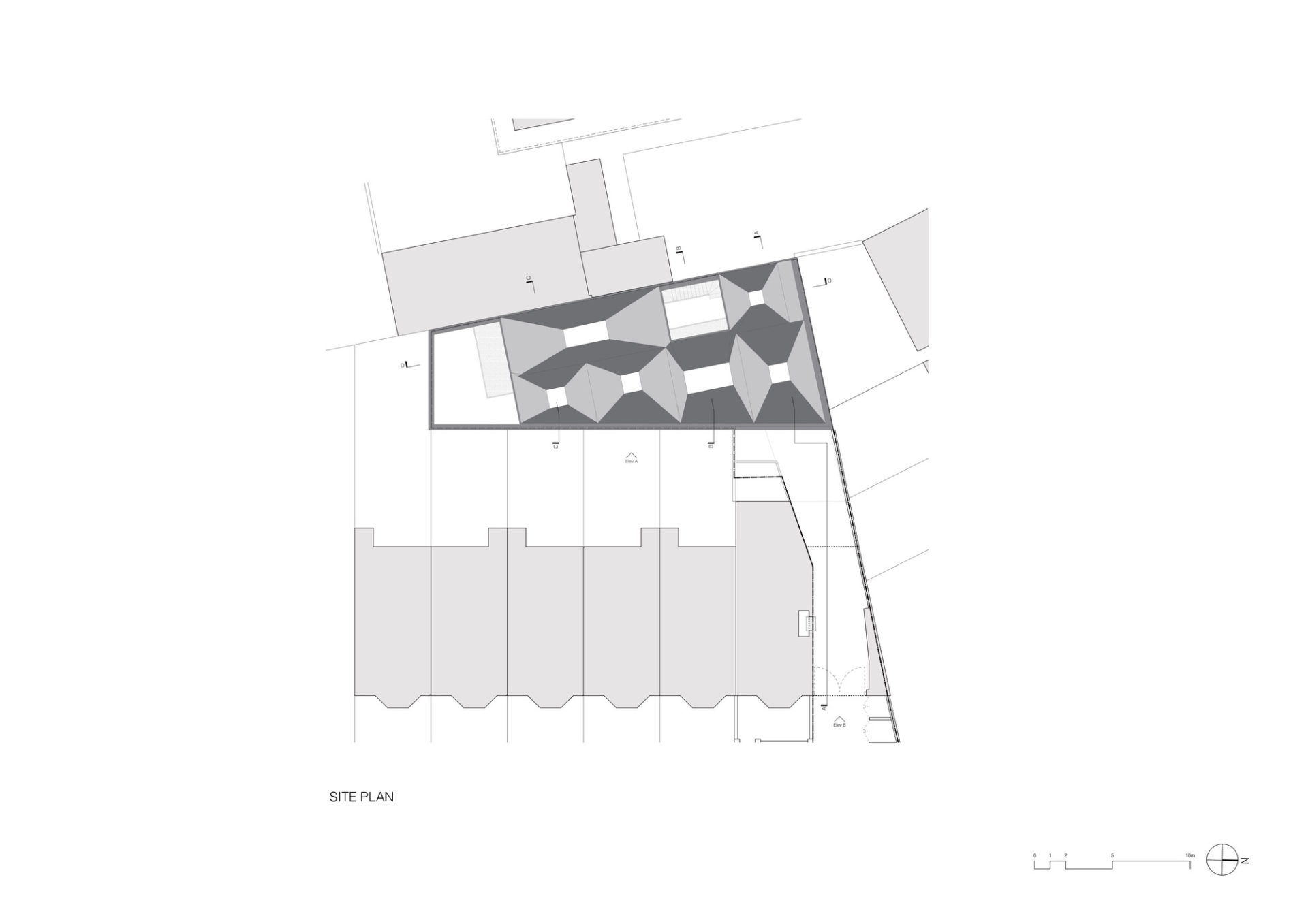 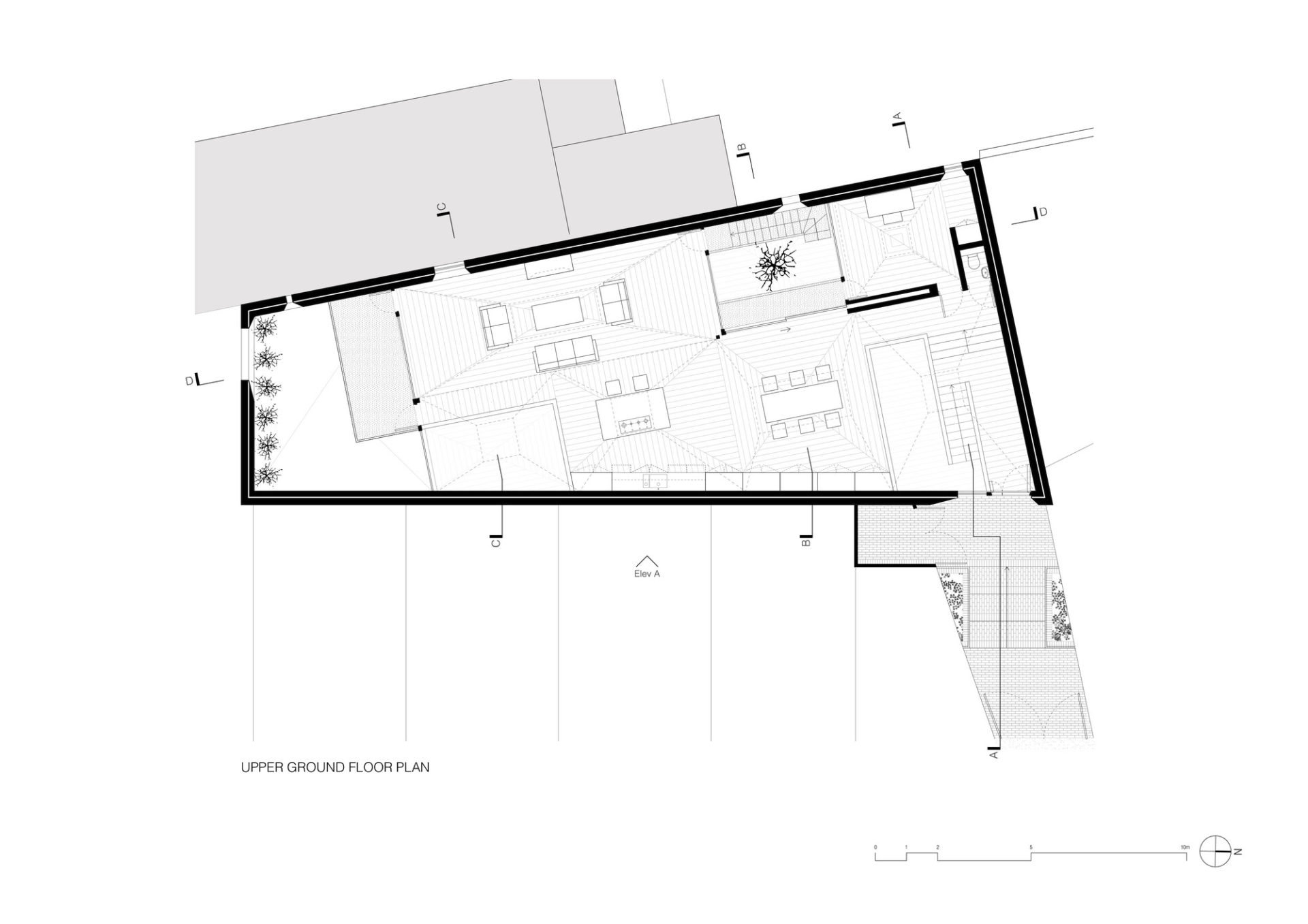