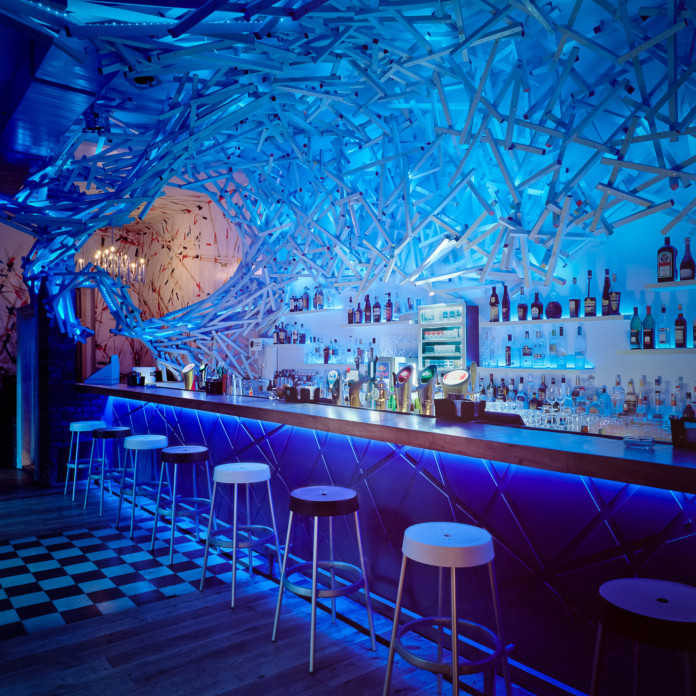 Boasting 5,295 square feet of space, the Doboz Bar is located in Budapest, Hungary, within the city’s vibrant entertainment quarter. It was completed in 2011 by 81font architects and operates within an old building from the 1800s that is currently under protection. During the final part of the 20th century, the building became abandoned and served as a hospital for children during World War II. During the 2000s, the district began to come back to life thanks to tourists that showed an interest in the area and its historic buildings. 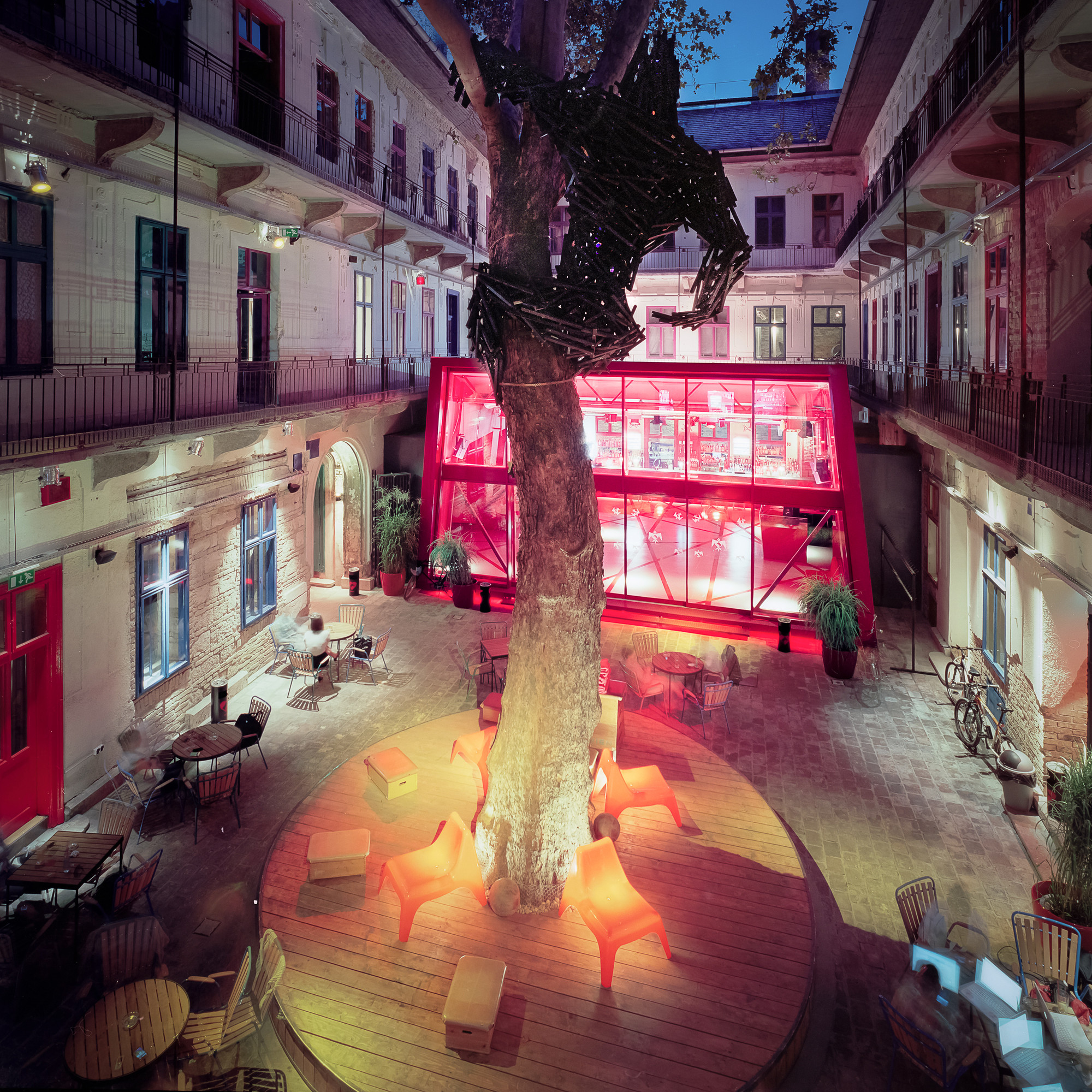 Translating to Box Bar in Hungarian, Doboz Bar features a hangar-shaped installation in the middle of its courtyard. One of the bar’s highlights comes in the form of a wooden sculpture depicting King Kong climbing a 250-year-old tree. The sculpture was created by Gabor Miklos Szoke, and it is quite a sight to behold. The establishment has enough room for 1,000 guests and flaunts a spectacular light show that creates a unique ambiance. The floors are made out of oak, and most of the furnishings were purchased from flea markets in Budapest. 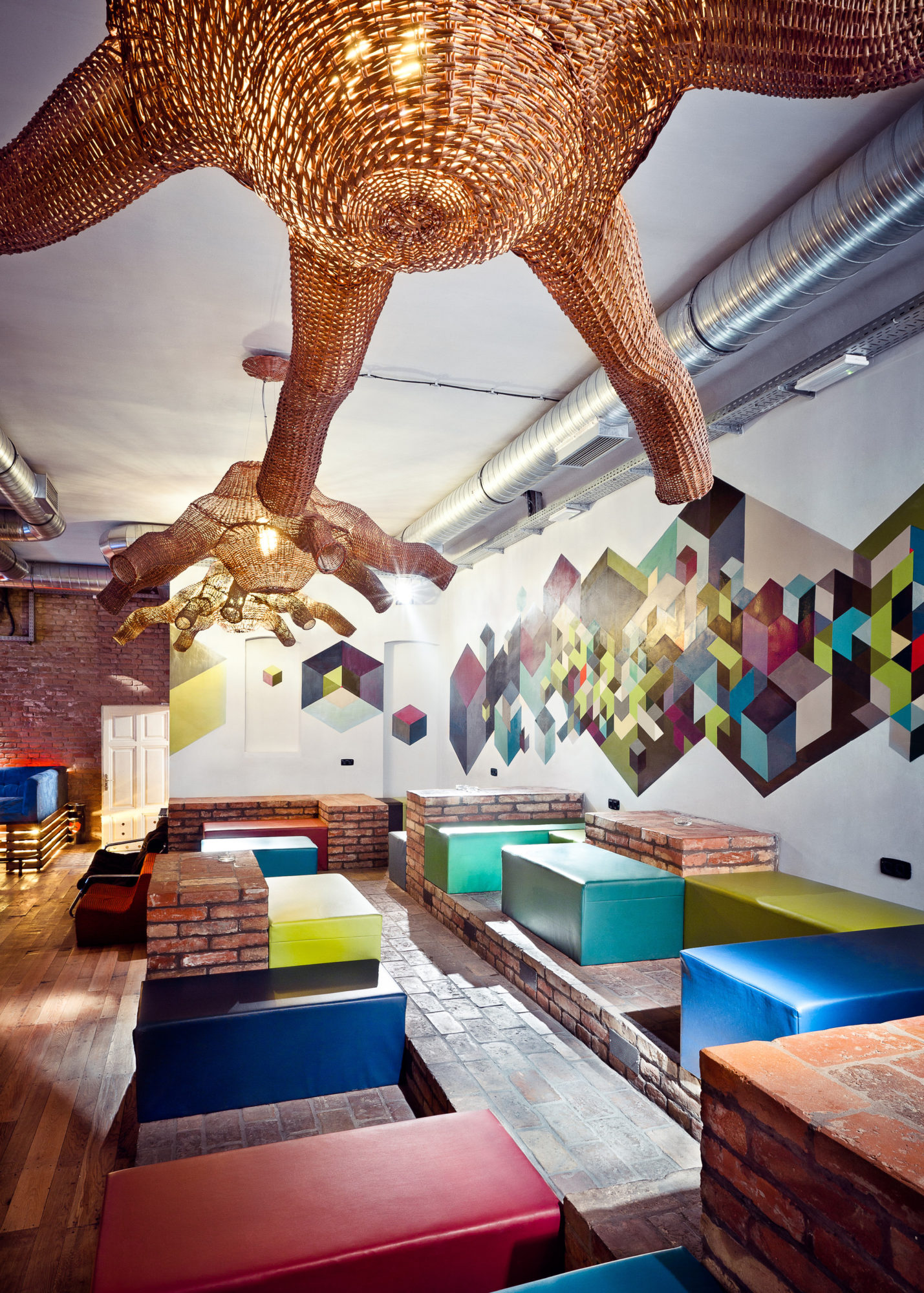 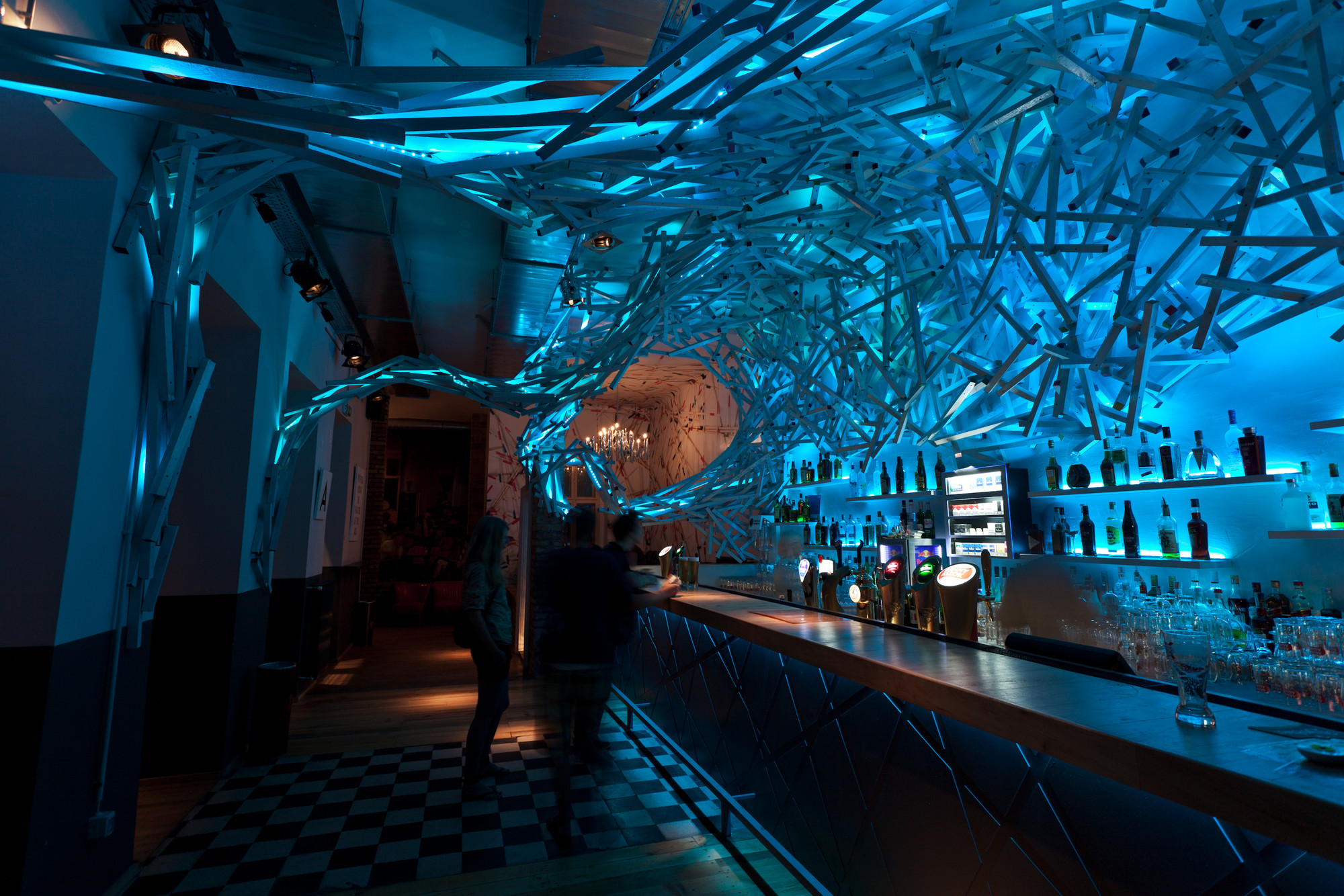 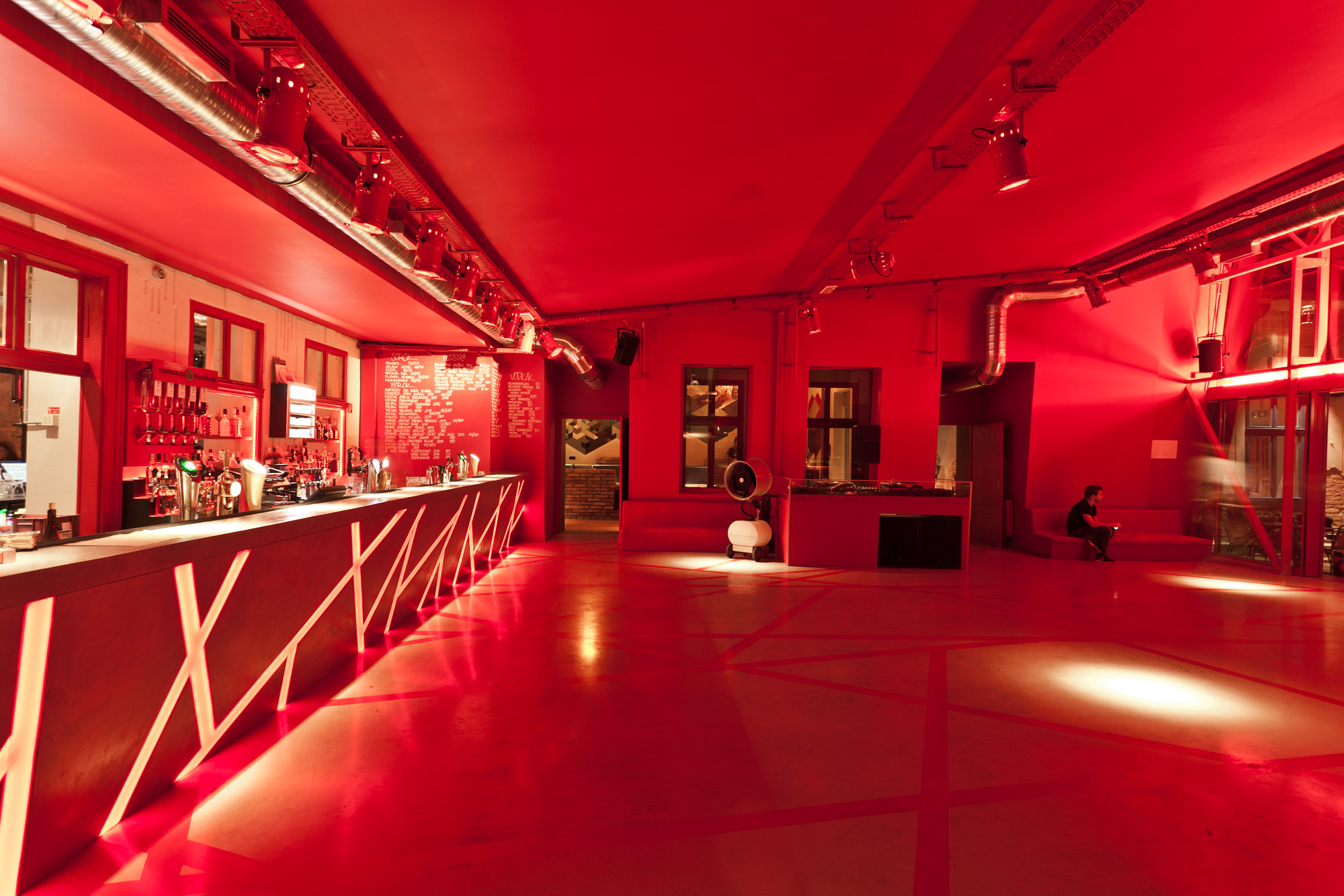 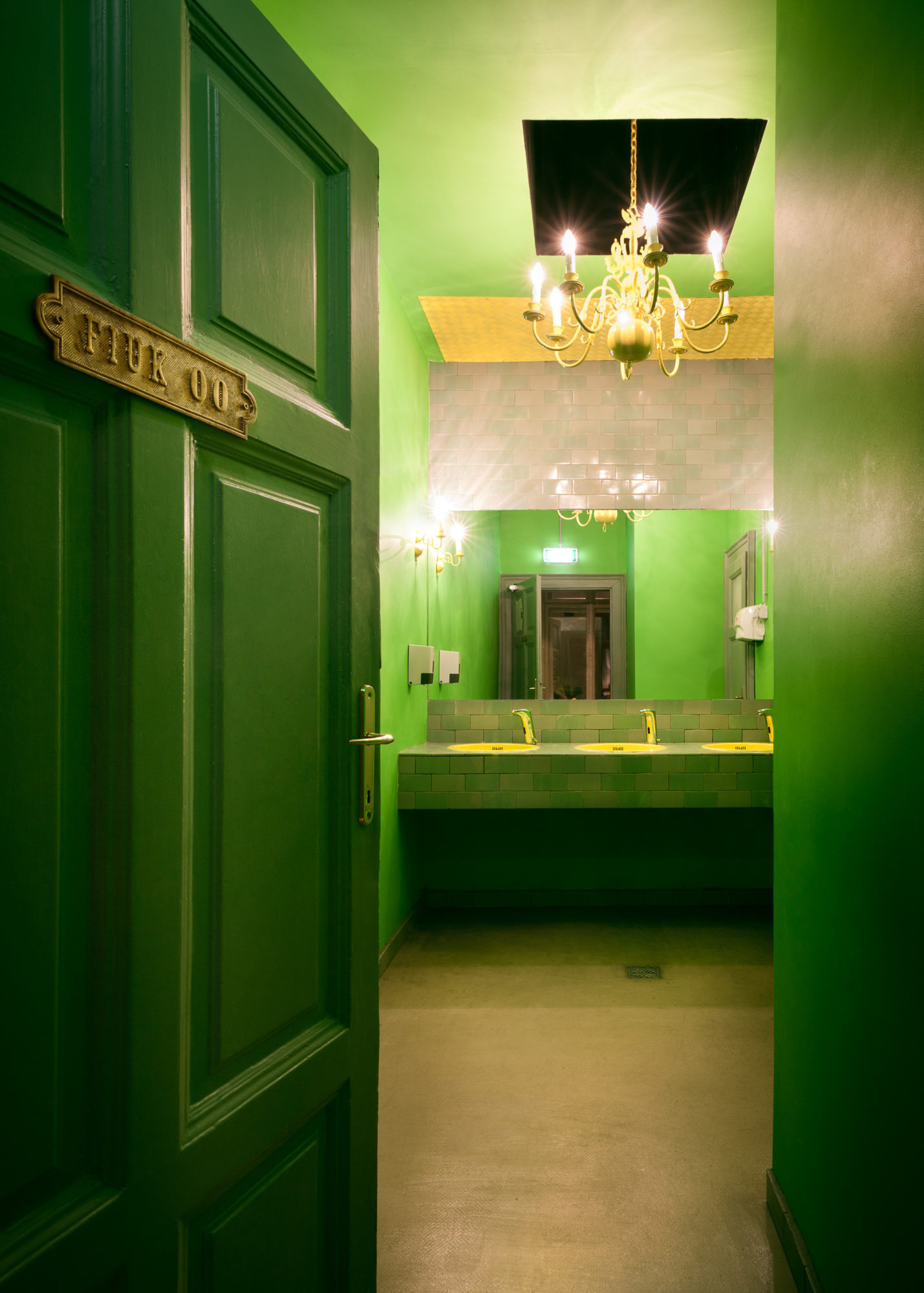 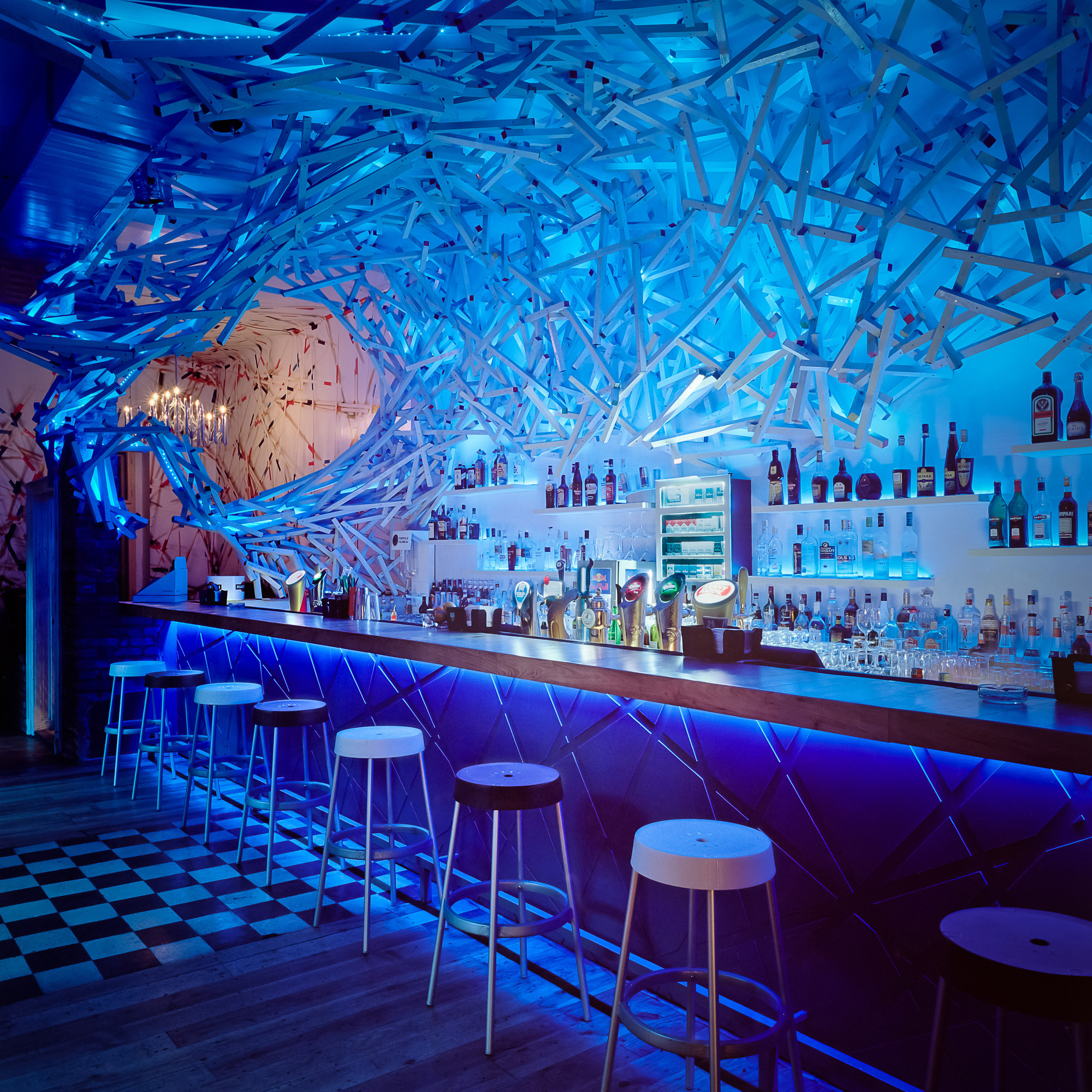 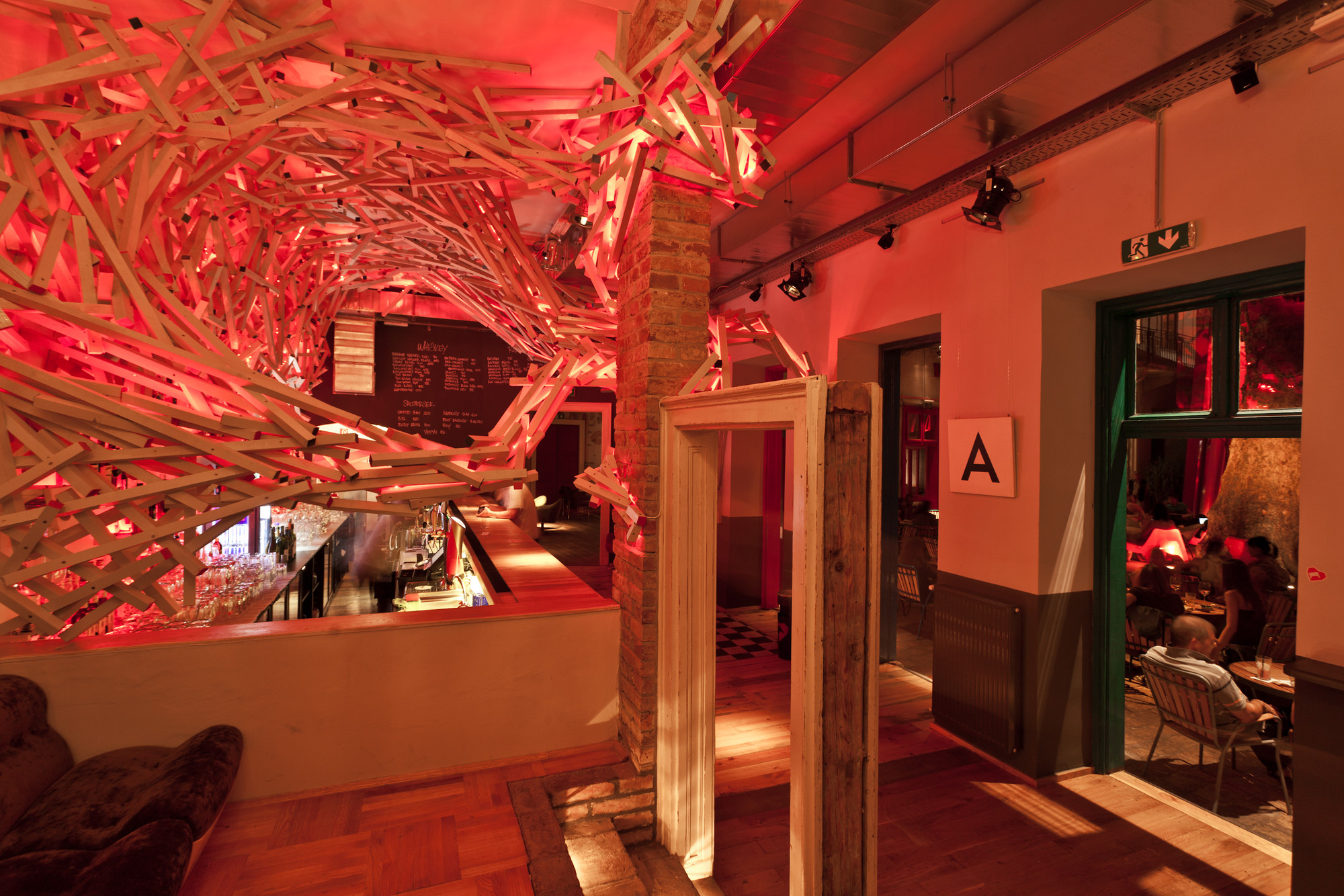 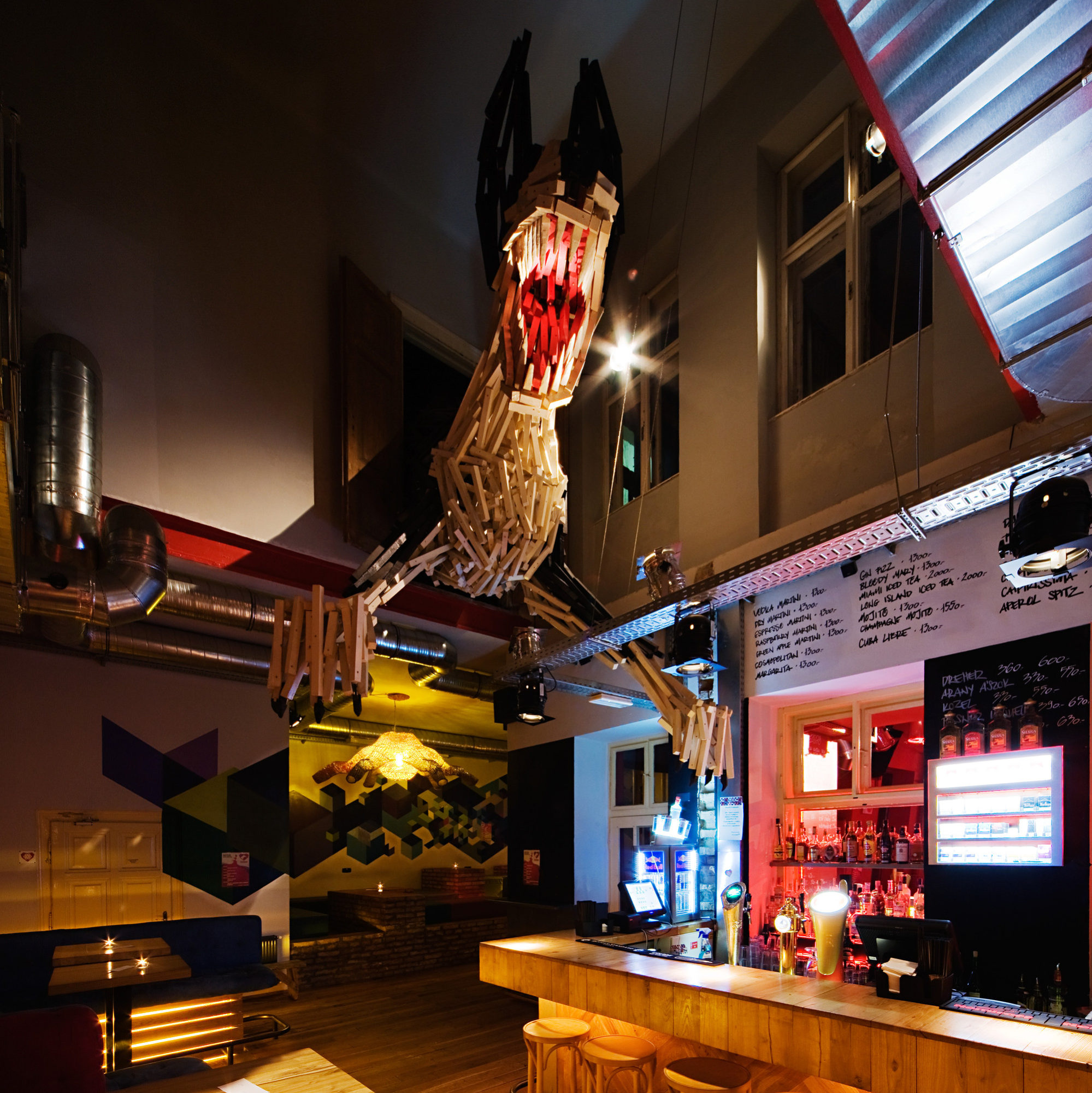 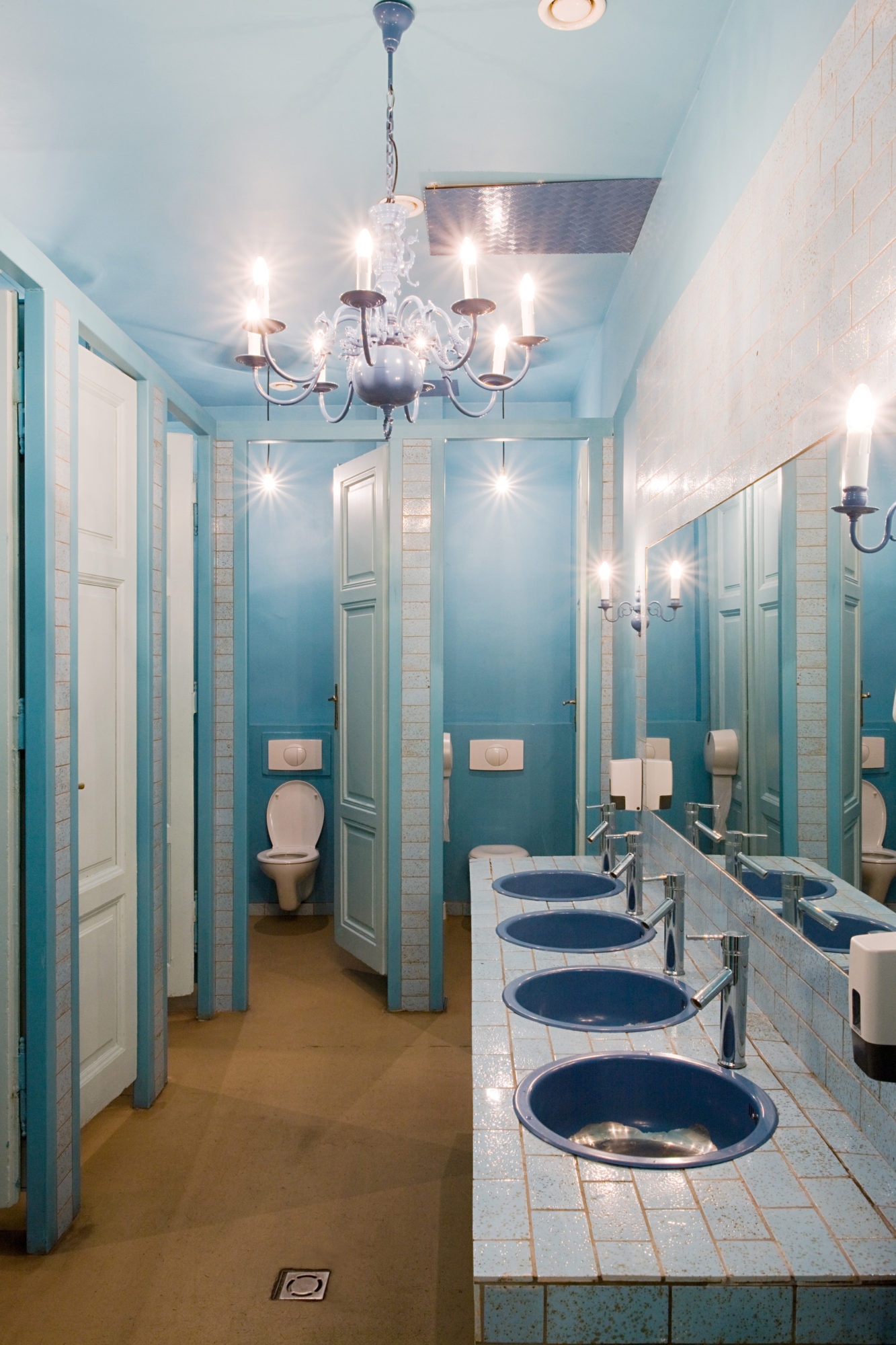 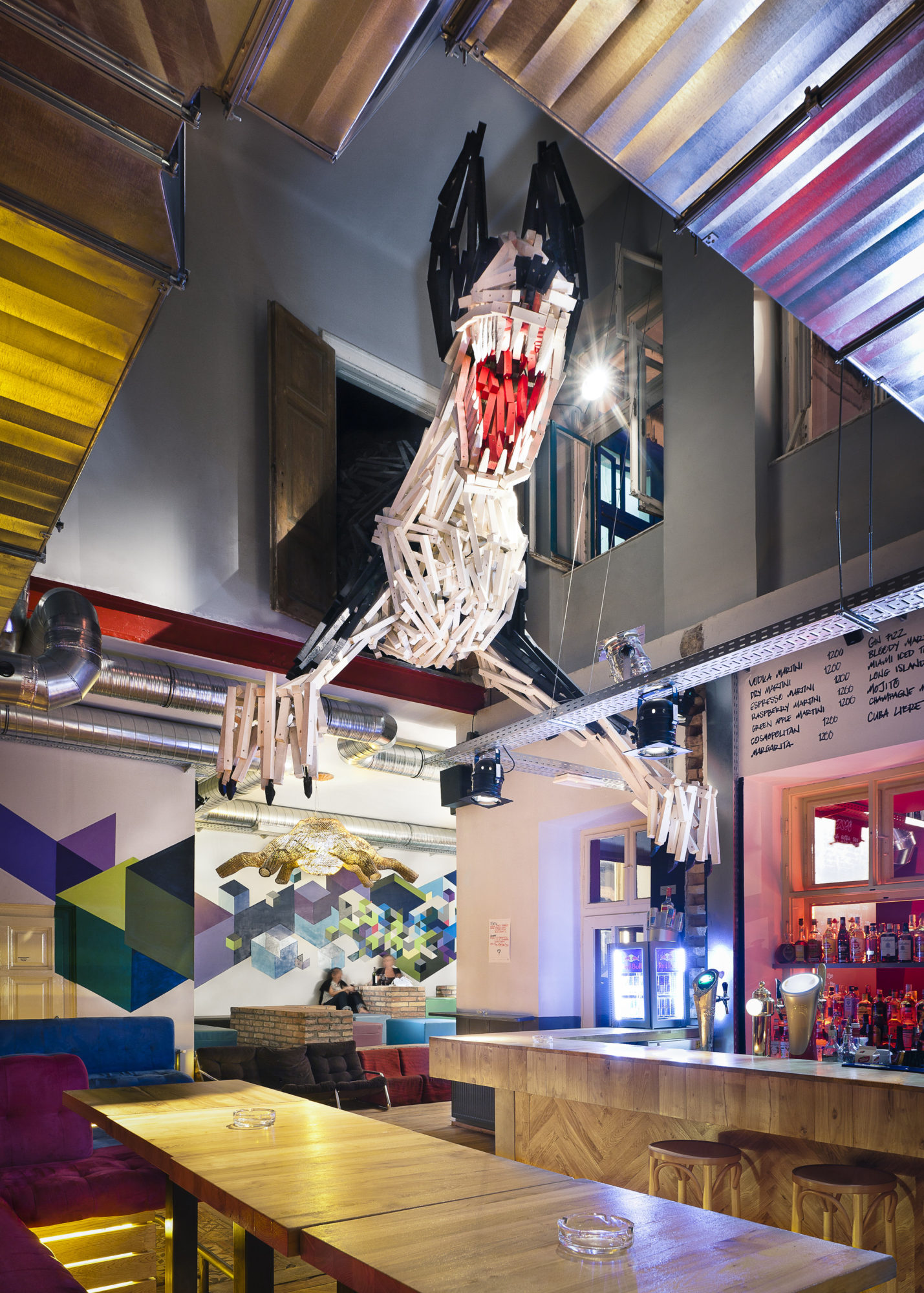 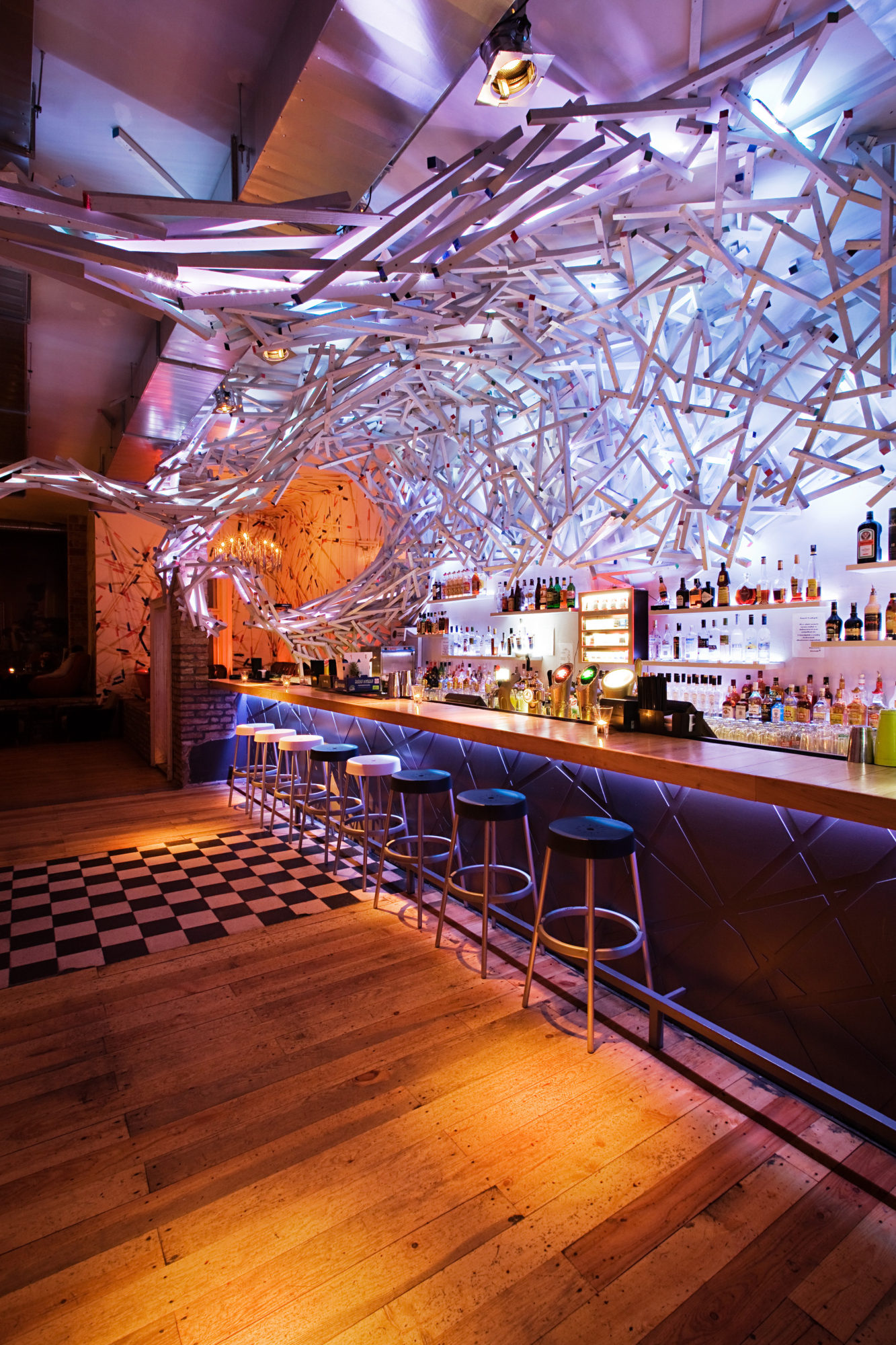 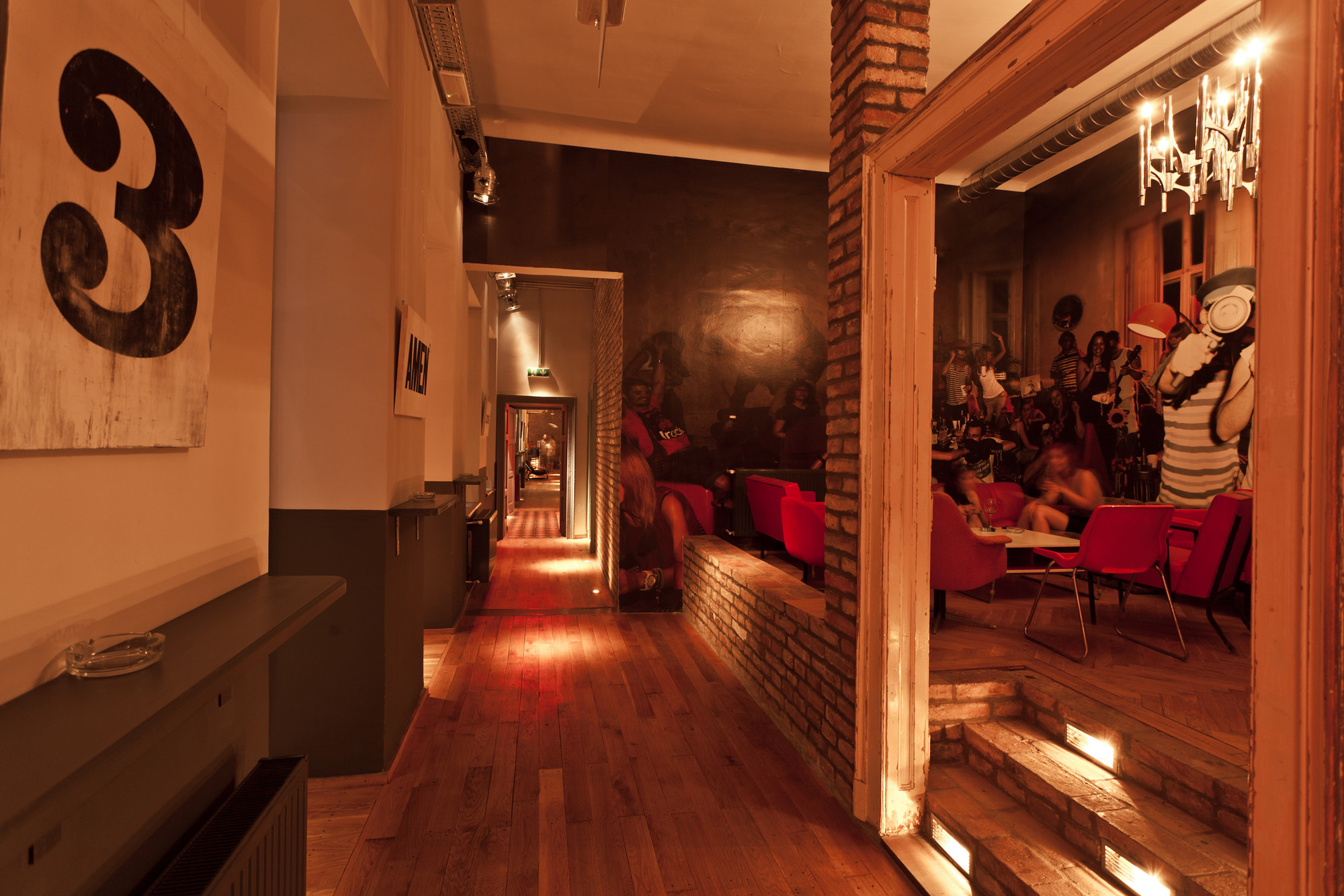 Doboz Bar is situated in the heart of Budapest’s entertainment district at the World Heritage site of the Old Jewish Quarter. Its protected building is a great example of early eclecticism of the 1880’s with a classicist ground floor, and was transformed to a bar and entertainment center by 81font architects. The project came into the spotlight again recently after its designers were nominated for Highlights of Hungary and took the Forbes magazine special prize.

The building’s story is typical to that of many houses in the Old Quarter. Despite the classy architectural values of the area, the house became completely abandoned for the last decades of the 20th century. It served as the main children’s hospital in Budapest’s ghetto during World War II. Its last inhabitant was a rabbi with his seven daughters and then the condition of the building worsened from day to day.

The renaissance of the district began in the early 2000’s, when the area became the favorite destination of the locals and visiting tourists, thanks to the so called “ruin-bars that occupy the inside of the eclectical houses built around 1880-1900. The main objective of the architects of 81font – who are involved in shaping the entertainment district’s visual identity – is to preserve as many of the buildings’ architectural functions and original materials, while giving a new atmosphere to the inner spaces using various exciting design elements.

Doboz Bar was built in a building where the facade is under heritage protection. The bar’s name (meaning ‘box’ in Hungarian) is a reference to the installation in the middle of the old building’s courtyard, which has the shape of a hangar. The static atmosphere of the installation is challenged by the sculpture of Gabor Miklos Szoke, a wooden King Kong piece that is climbing up the patio’s 250 years old tree. The graphic design seen in the walls of the building were created by Eszter Laki. The venue can hold as many as 1000 guests, and the vision of 81font was to create a new type of cultural center. The squat party atmosphere of Doboz Bar is partly due to the presence of the original door frames. The floor is made of old oak, while the architects re-used as many of the original materials found in the house as possible. The lumbers of the loft are part of the installations in the grill bar, while the restrooms were created using the old doors found in the house and covered with 100 years old Zsolnay porcelain. A huge part of the furniture came from the city’s flee markets based on a firm design concept. A strong part of the idea is how the creators are using lights to create a unique atmosphere.

81font was one of the contenders of the recent  Highlights of Hungary 2014 event organized by Super Channel a privately funded non-profit body that commissions 10 professional curators each year to nominate their favorite grass-roots creative initiatives to a public voting exercise. 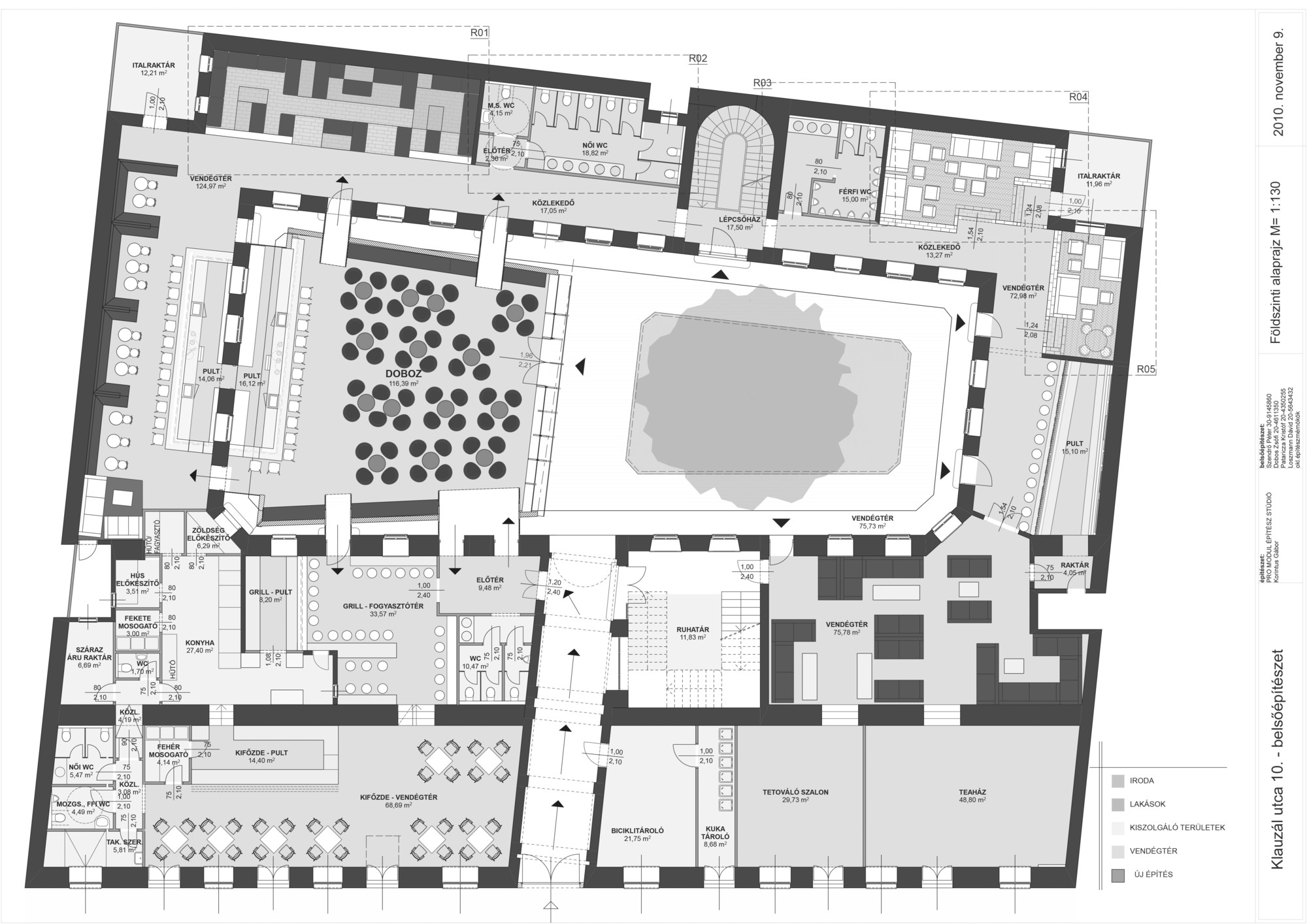