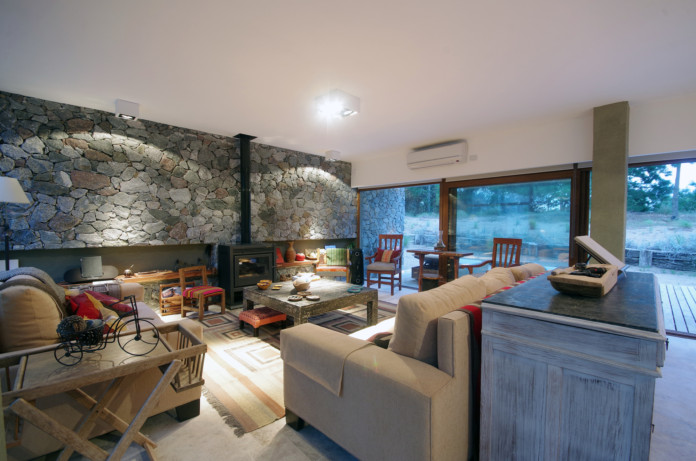 El Patio House is a comfortable home in Costa Esmeralda, Buenos Aires that was completed in 2013 by a skilled architect named Lucas Mc Lean. It can be found 242 miles away from the city, on a scenic site well removed from traffic, noise and commotion. This is a holiday home that can be inhabited regardless of season. It offers great entertainment opportunities as well as the unique sensation of being outside while residing inside and vice versa. 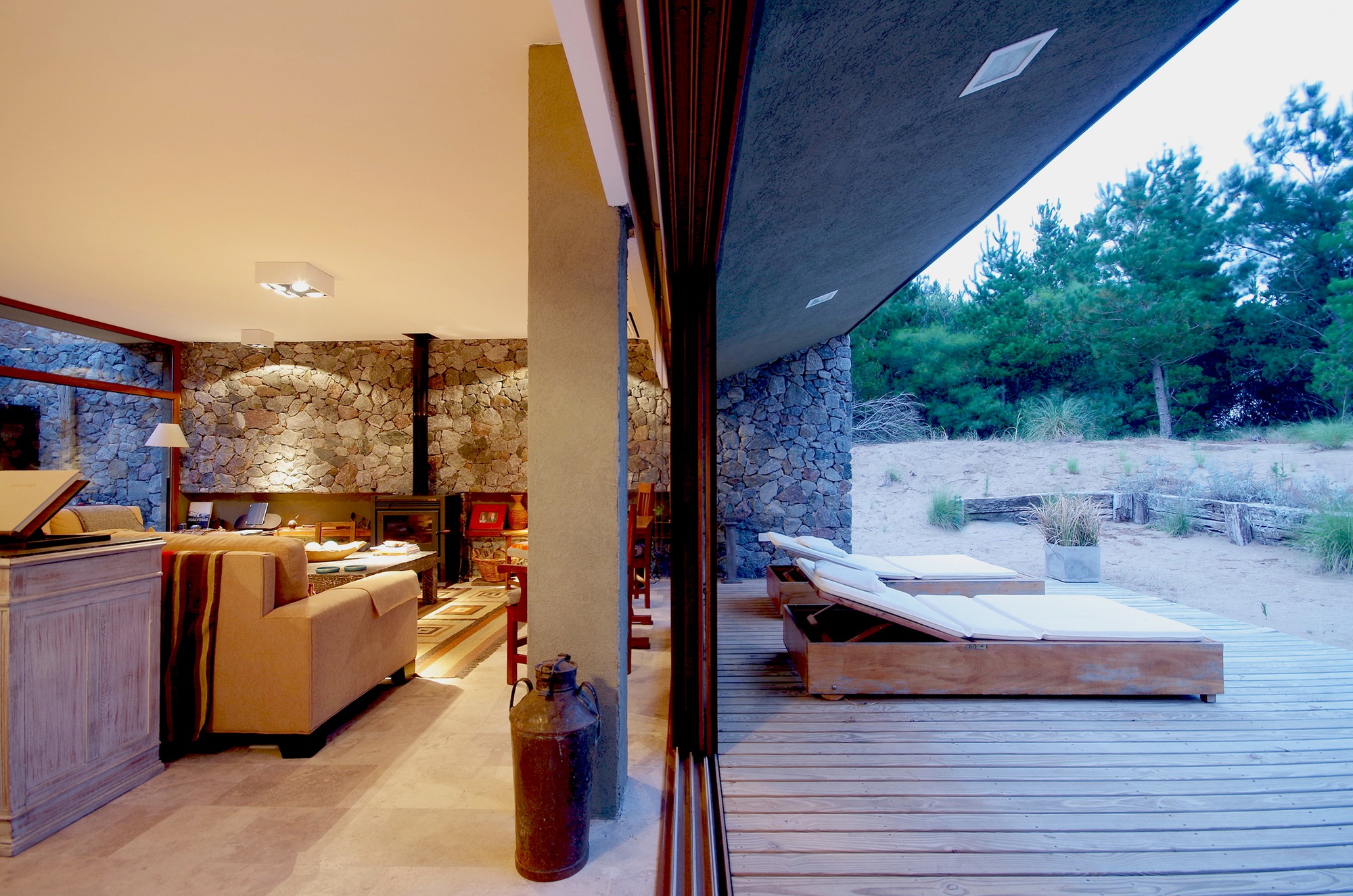 The social and private spaces are separated, thus the bedrooms are placed at the front of the residence while the social spaces rest at the rear. The materials used for the construction include wood for the exposed floors, travertine marble for the interior floors and cement green for the plastered walls. In order to ensure that the bedrooms would benefit from the best views without interruption, the architects implemented the garage on the lot’s lower level. 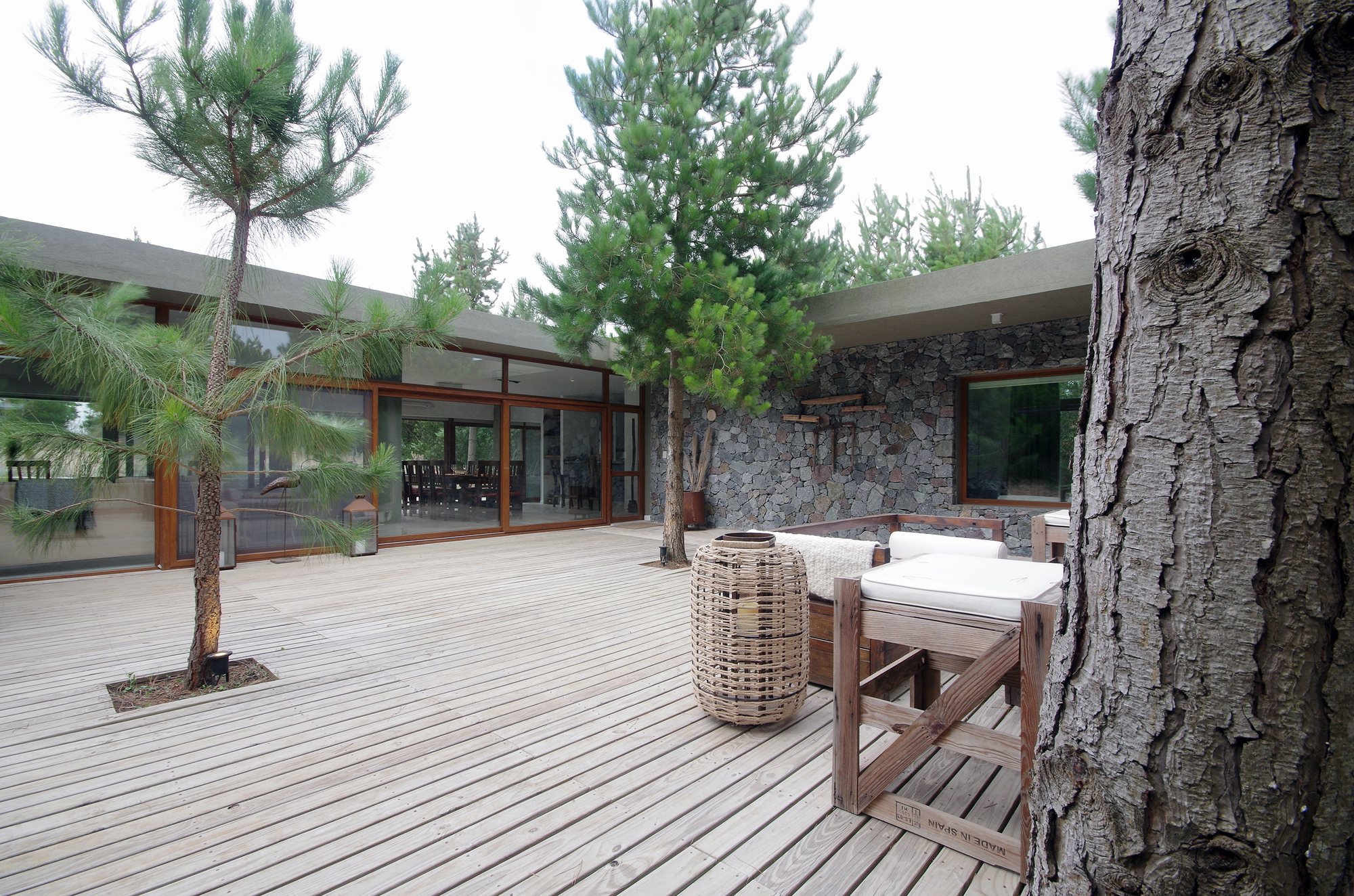 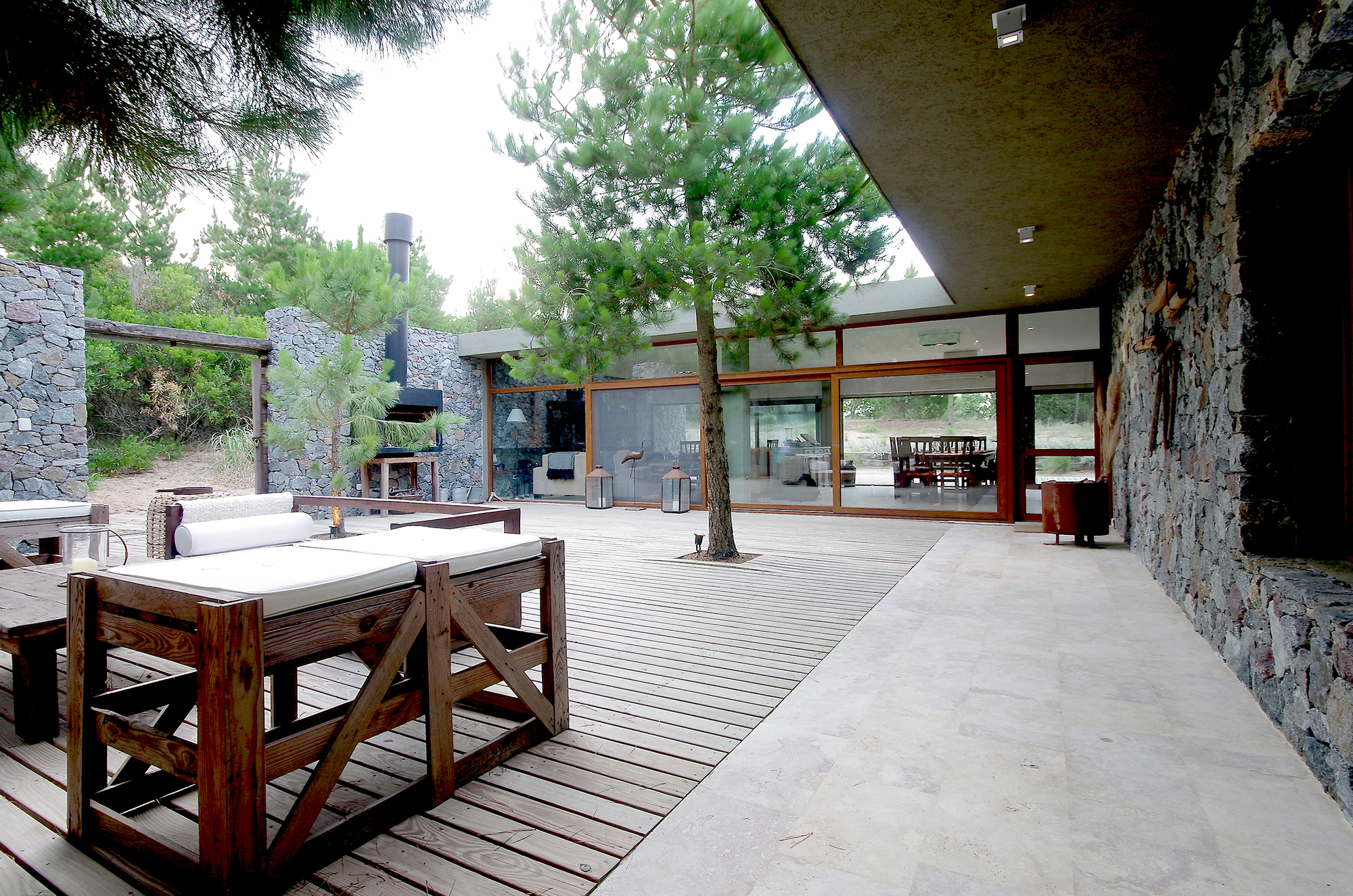 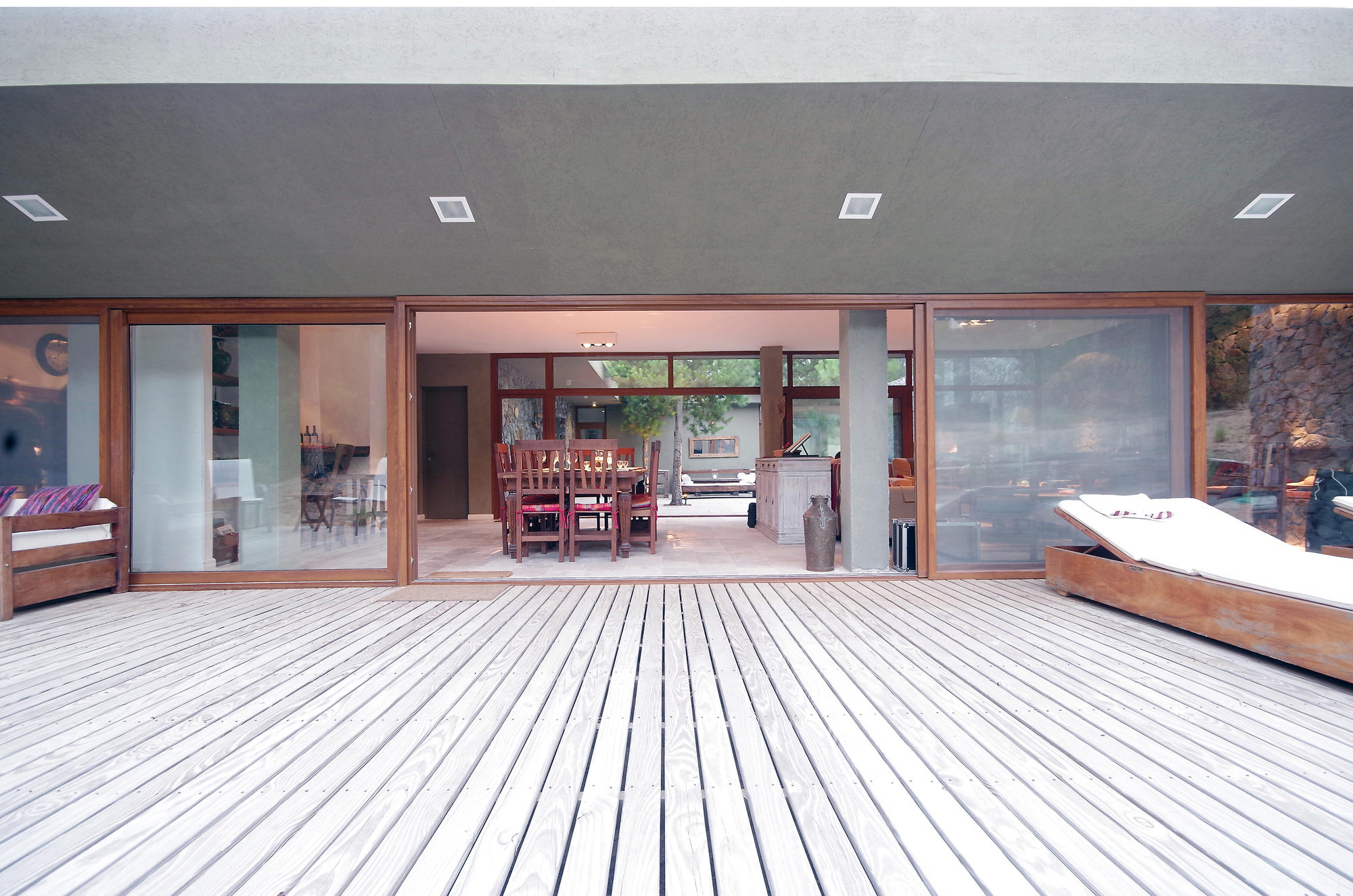 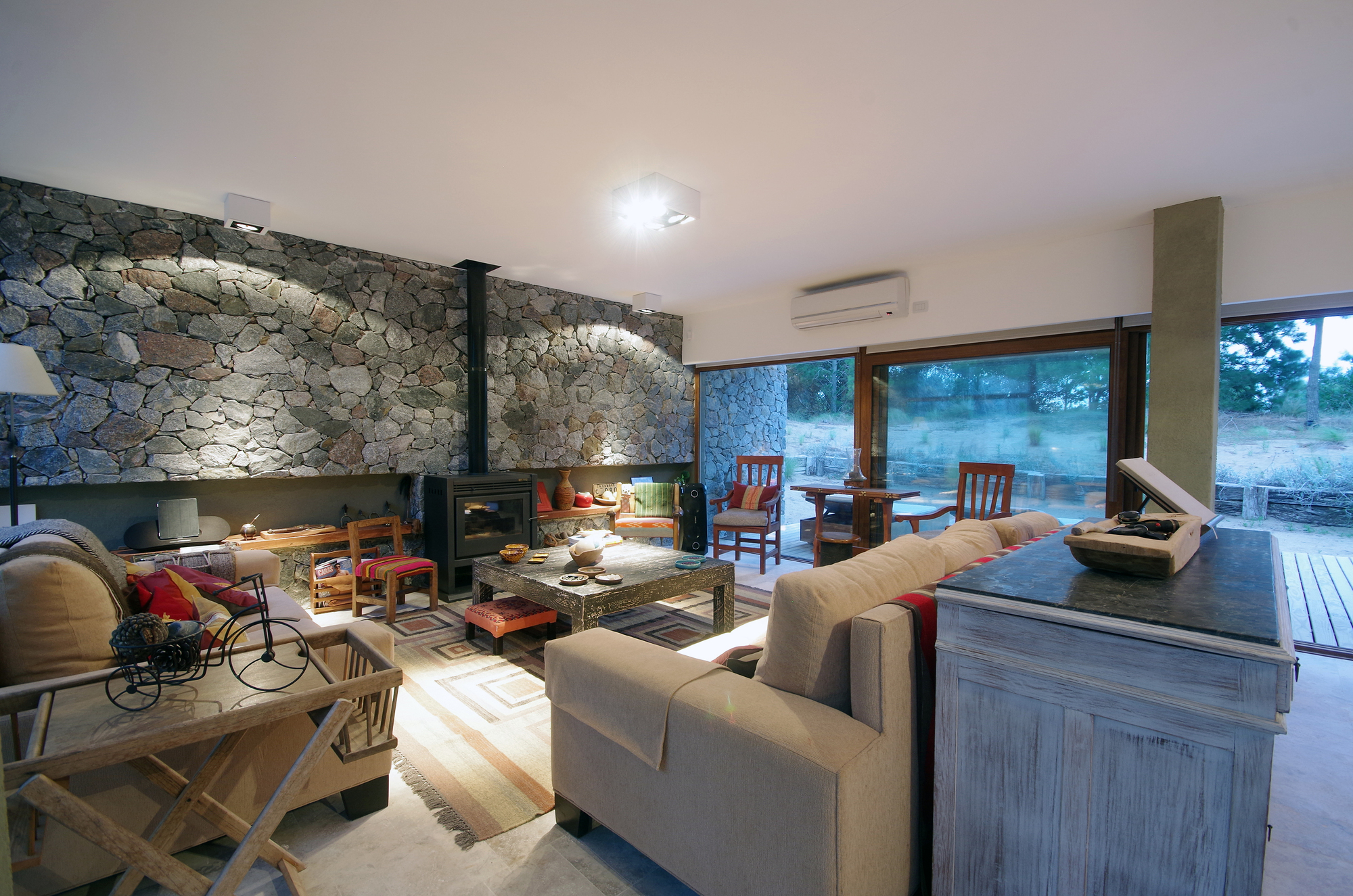 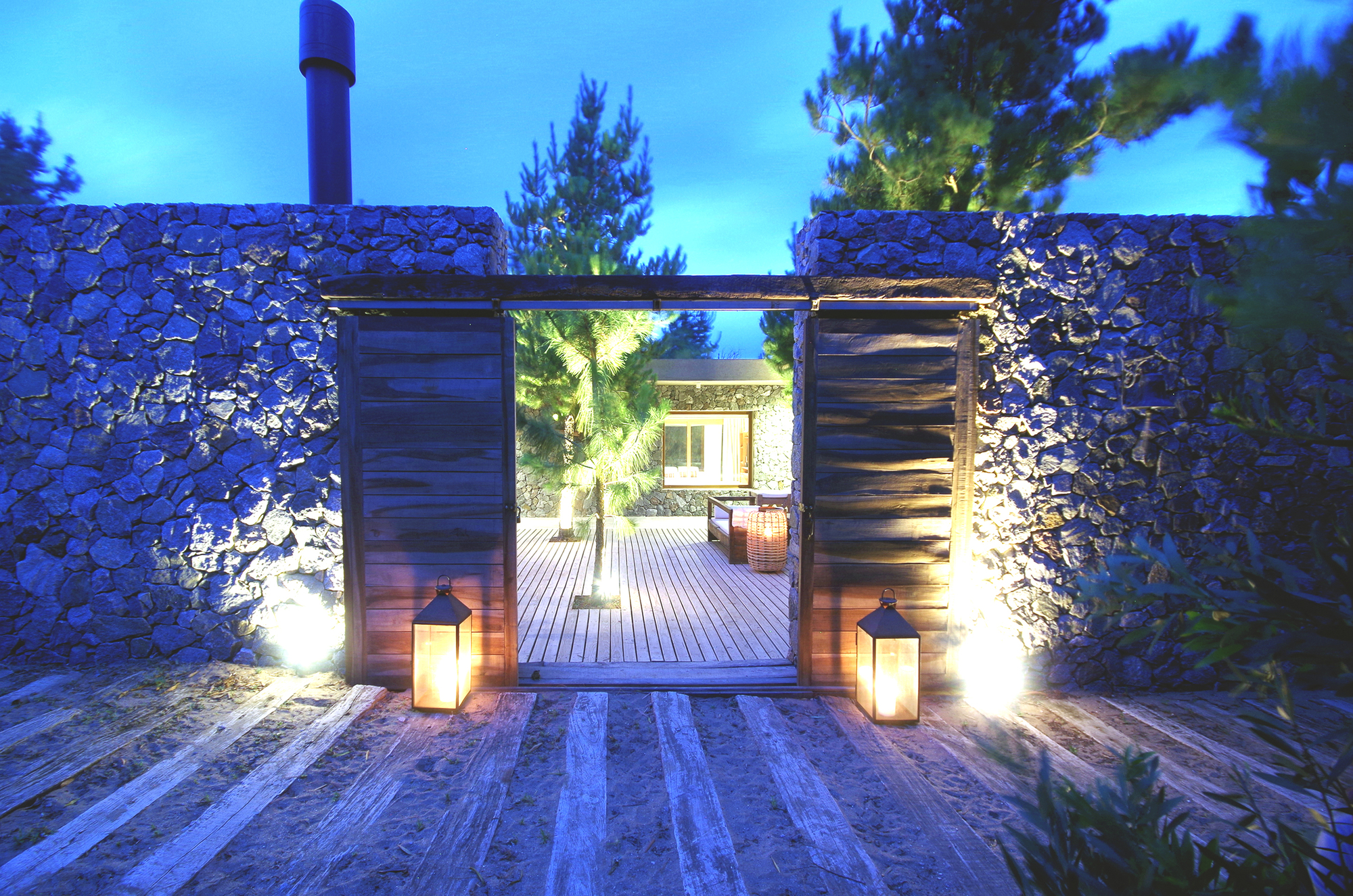 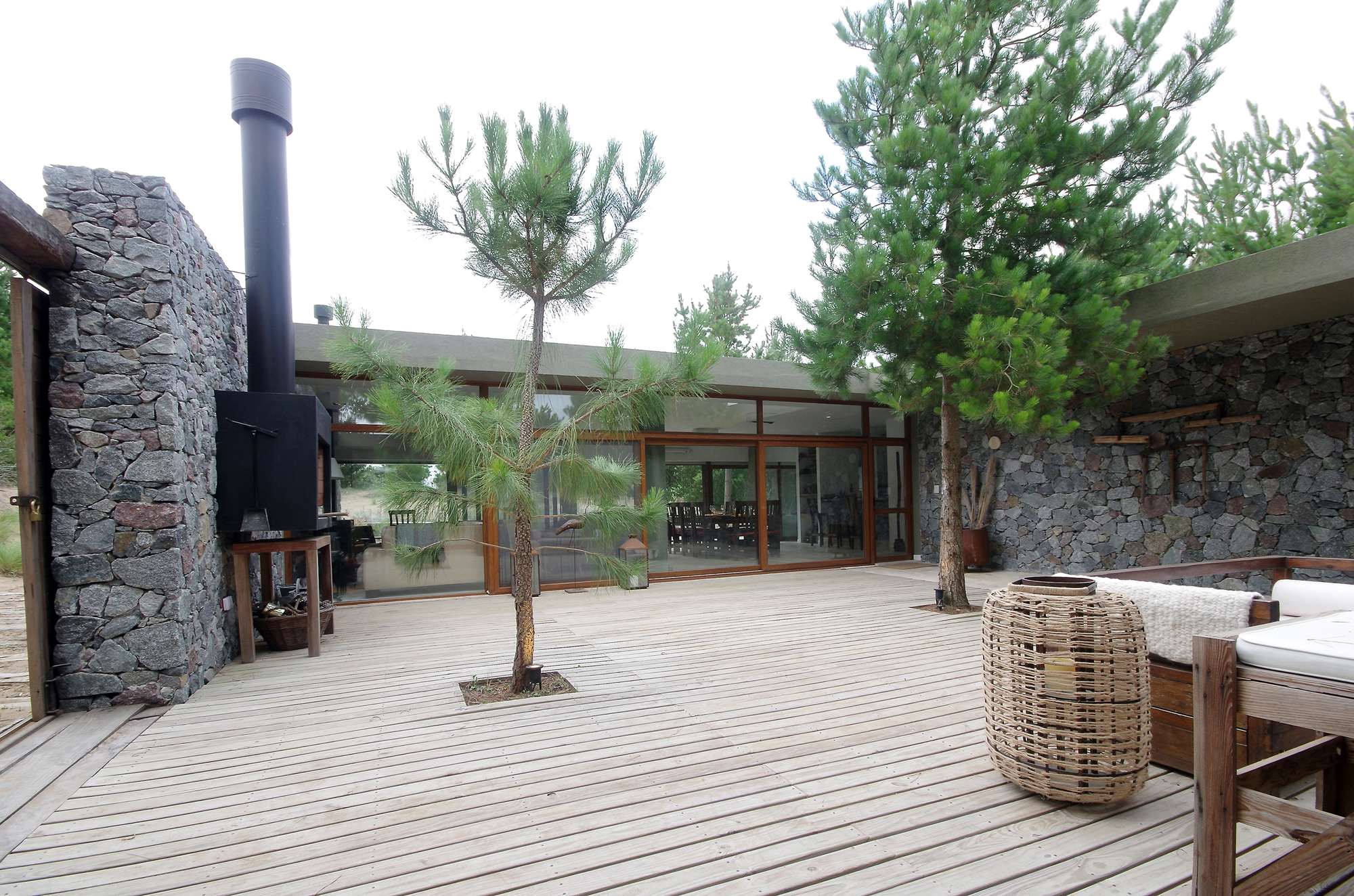 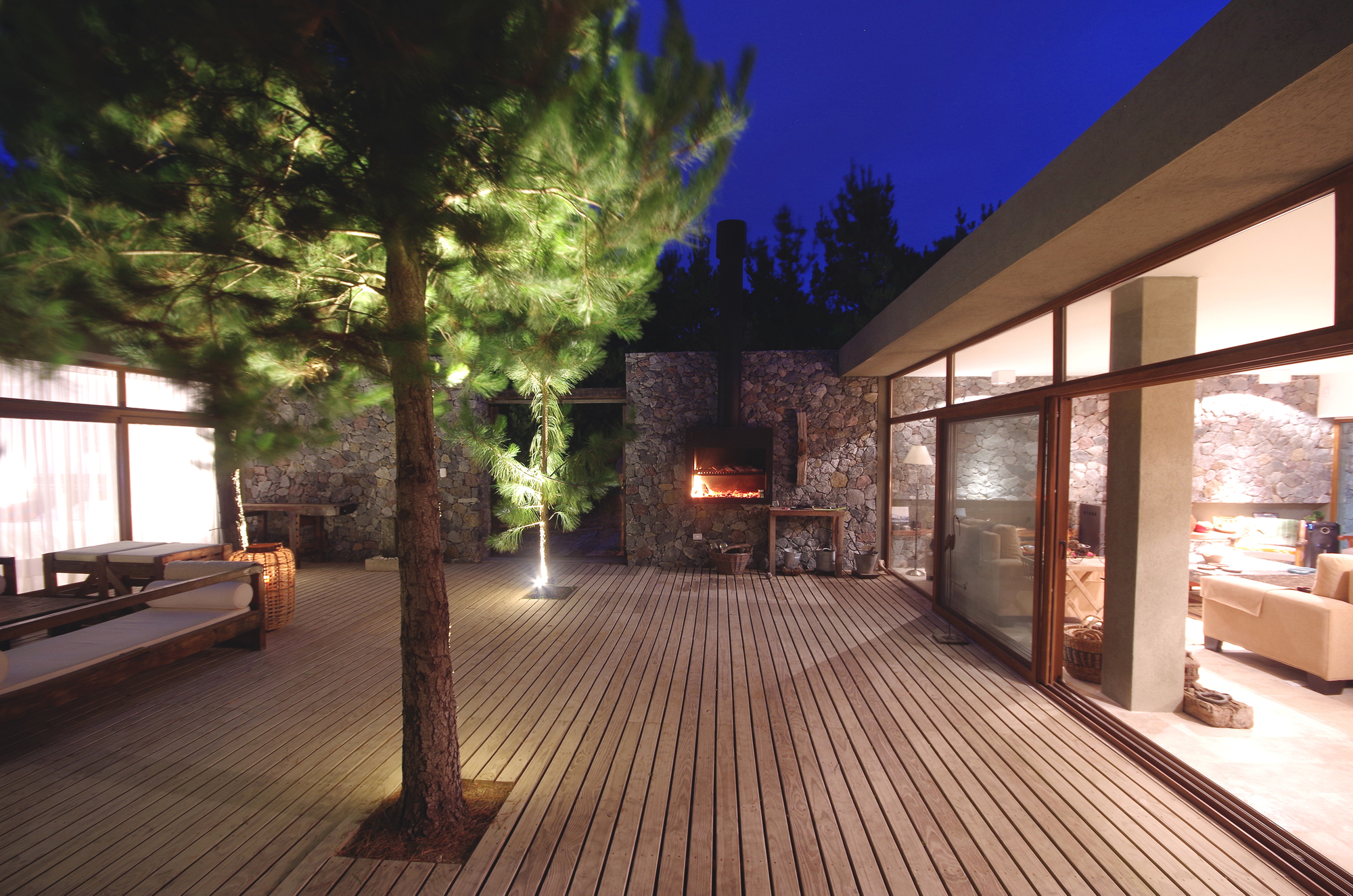 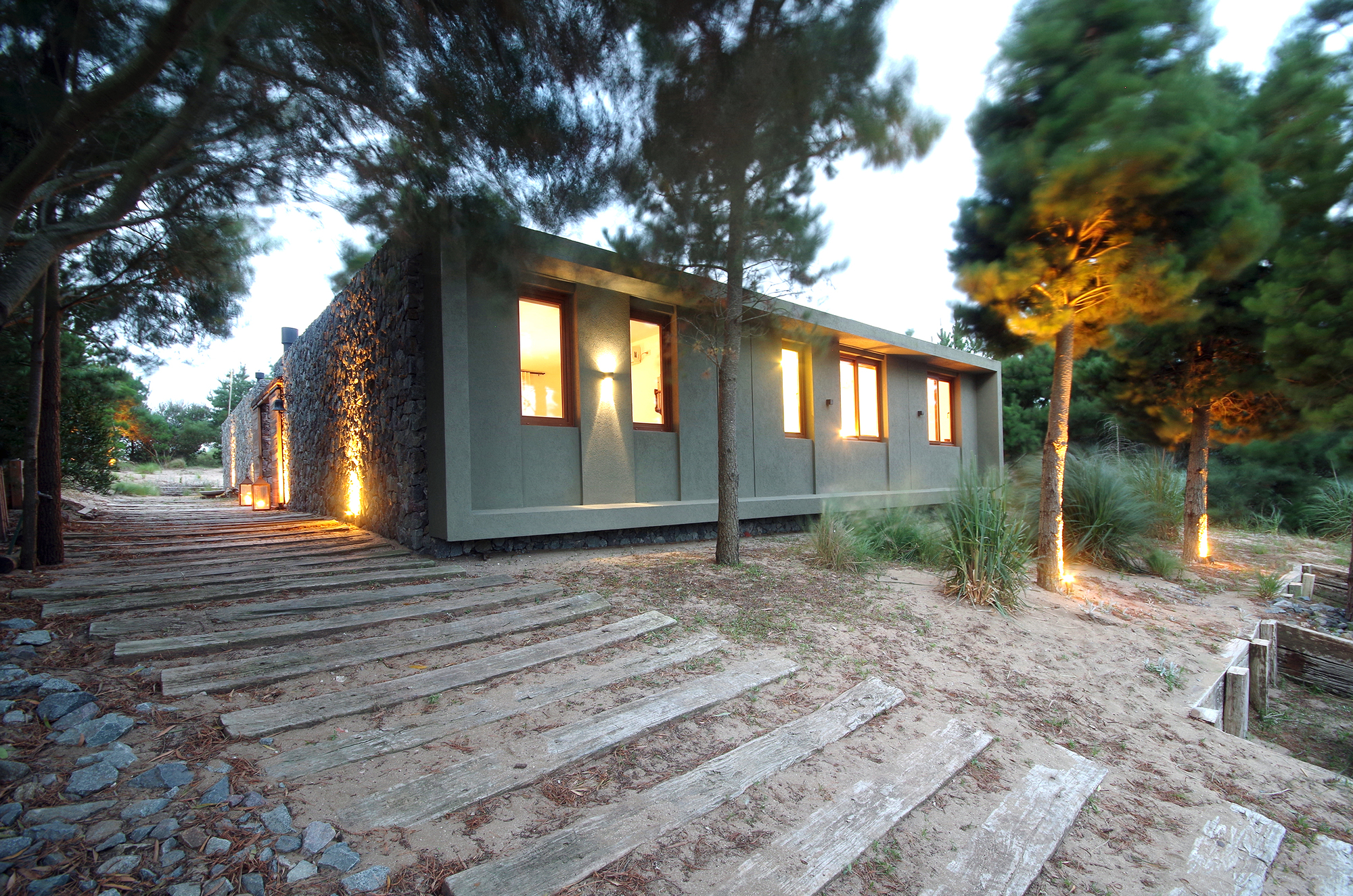 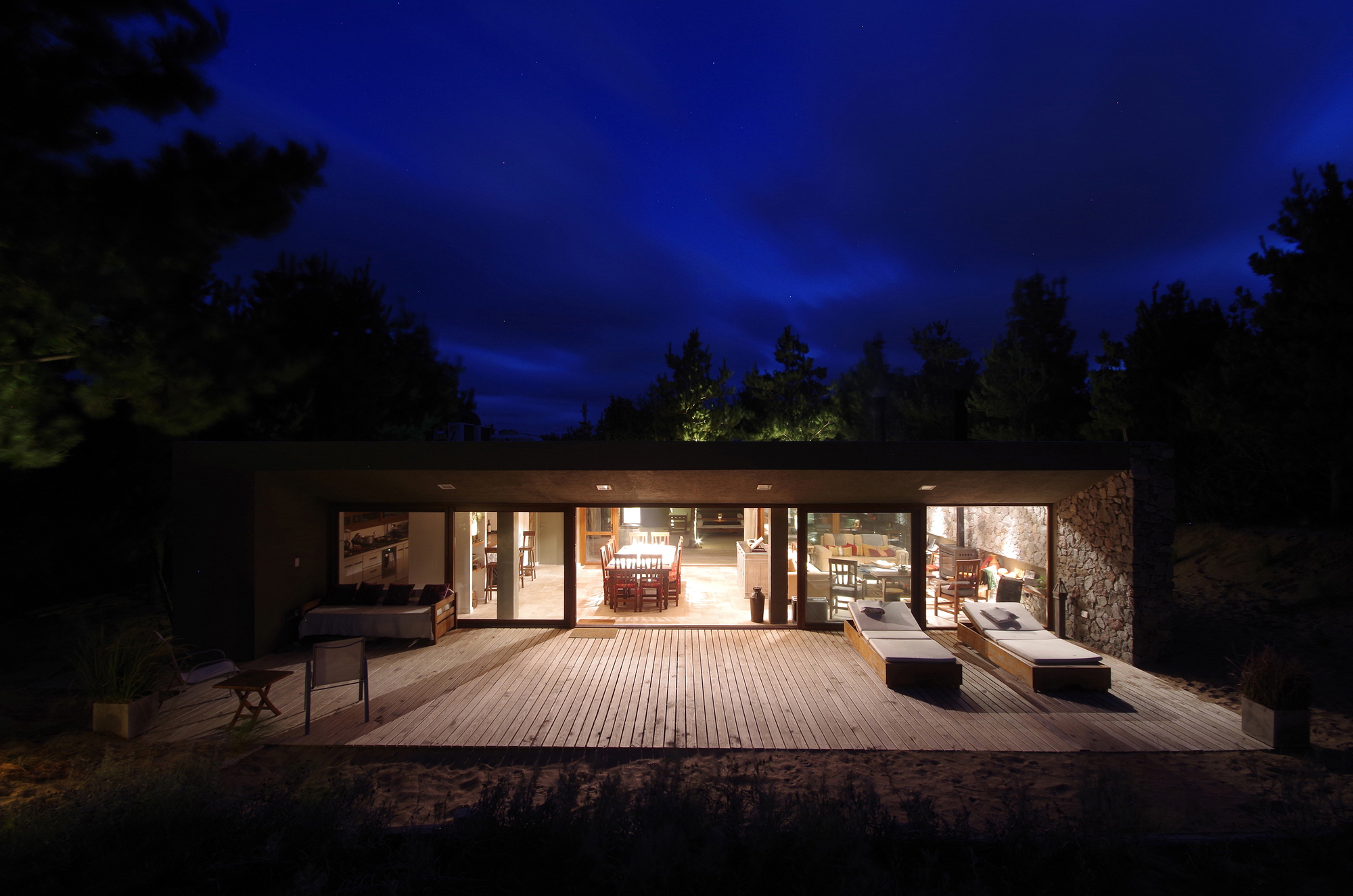 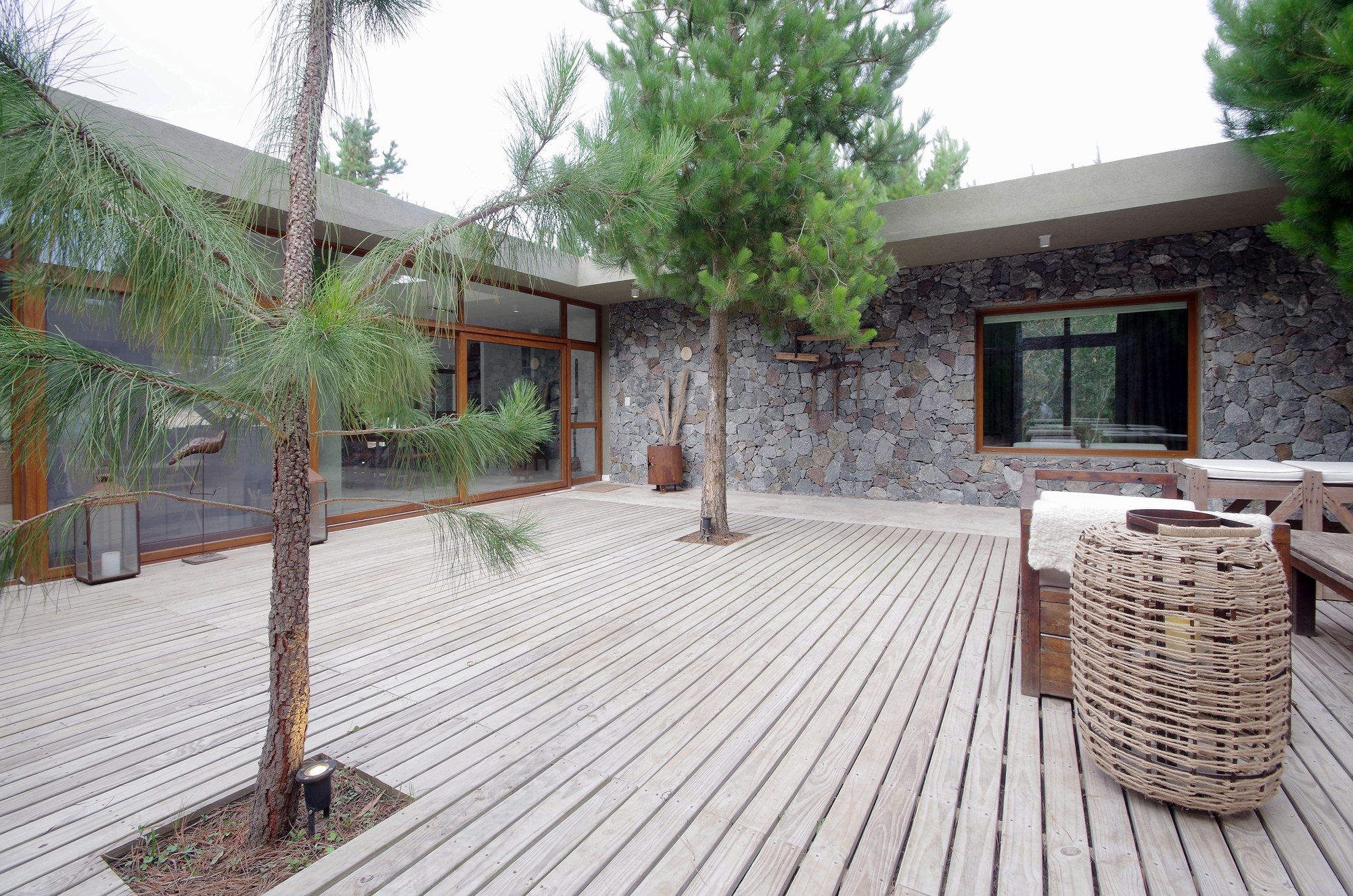 The project was built in Costa Esmeralda, a private enterprise with 1000 ha and more than 3km of Atlantic coast, 390 km from the City of Buenos Aires. (Residential Neighborhood 1 – Lot 19)

The project reinterprets the courtyard typology. The morphology of the plan is structured around a tight and absorbing space, sheltered from strong winds and low winter temperatures.

The client commissioned a holiday home for use in all seasons, both summer and winter with the main premise of “feeling inside being outside, and outside being inside.” As this is a house to entertain guests, a clear independence between the common area and the private area was proposed. The courtyard, protagonist on the side access, acts as a functional, auditory and visual hinge between these two areas, like the semi public architectural program that develops behind. Three bedrooms, the night rest area is located to the front, while the area of greatest social exposure is located to the back. This void of 80 m2, the heart of the project, solves the semi covered circulation between the program, and is responsible for integrating the interior – exterior doorway, thus generating a projected range of meters which do not compute as built area. The house of 160 m2 then seeks to conquer the lot, implanted in the center and occupying the highest amount of linear feet between mandatory setbacks.

Another determining factor that the project addresses is Privacy. With over 4000 available lots, we decided on an introspective project, displaying little on the facade, with a rectangular, modulated, sober and off the ground section. Four Araucaria pines are the only sign from the street of the situation projected inwardly. The front facade is translated on the dense, rustic, heavy, and opaque stone volume, which contains the pedestrian access. Once inside, the architecture becomes almost invisible, with a glazed living dining room on both sides that allows users to observe the depth of the lot and its wild vegetation. The common covered area enhances the gesture of intimacy to the back of the site; materialized by a sloping eave that modifies the height of the woodwork and protects interior furnishings from the sun exposure which means facing north. The sliding woodwork open up and make the covered area flexible.

With regard to materiality, we decided on the use of noble materials such as stone, wood for exposed floors, travertine marble for interior floors, and cement green for plastered masonry walls, which is camouflaged with abundant maritime pines.

We also performed a topographic work or sand movement with wooden beams. We thus placed the garage on the lower level of the lot, releasing the views of the front bedrooms. Finally, another sand containment was done on the rear setback, maximizing the higher levels to enhance privacy and shelter from the elements. 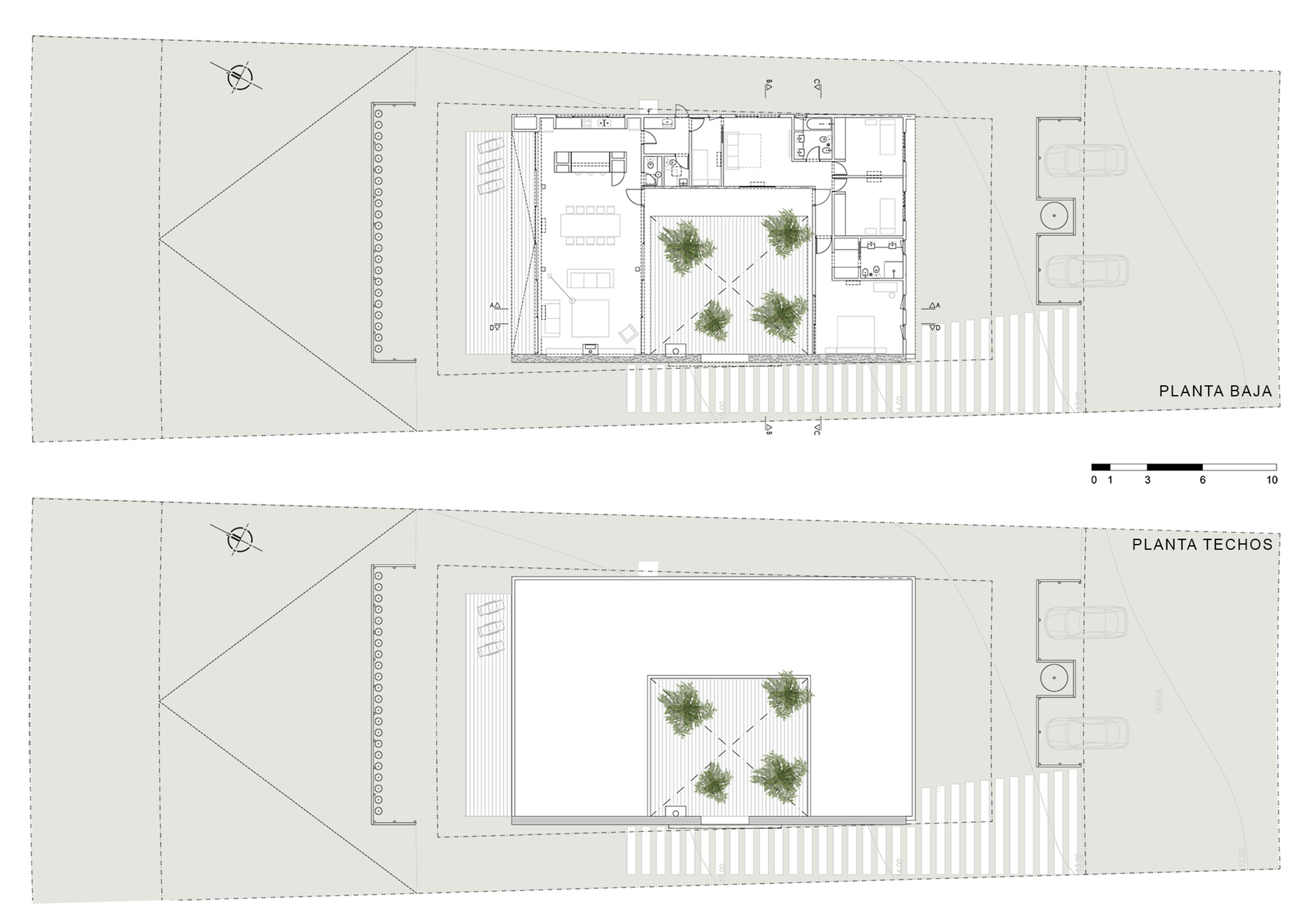 What to Do About Foundation Problems at Your Home

7 Decorative Accents Every Room In Your House Should Have

Best Ways to Save Money When Getting Your New Home