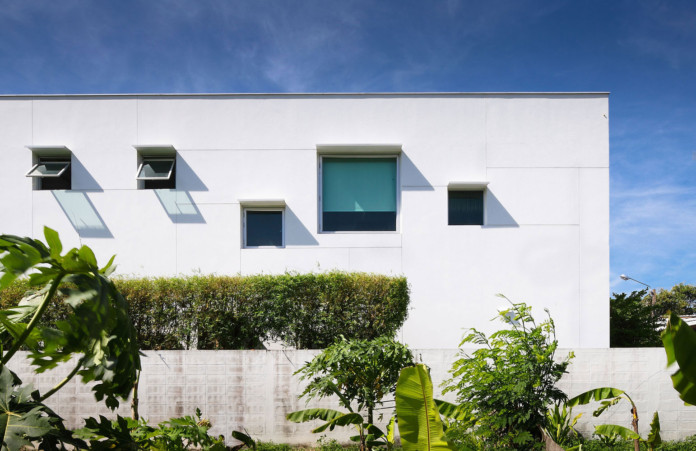 Minimalism, modernism, comfort and elegance – this is what the T-House is all about. It is a spacious and welcoming home that was designed in 2010 by a company named NOTDS. It can be found in Tha Sai, Thailand, and even though it flaunts a mix of tropical and contemporary architecture, its appearance is actually quite simple and organized.

Inside, the residence impresses with a minimalistic design that includes monochrome colors such as black, white and grey complemented by warm touches of brown on the wooden floors and doors. Generously sized windows allow the home to be flooded with natural light during daytime, and when the sun sets, spotlight-based lighting arrangements take over and help create a warm atmosphere throughout the main living areas.

The house is divided into two levels that are linked by a beautiful floating staircase with wooden steps. The first level features the dining area, living area, an office, a Thai kitchen, storage facilities, a service area, bathrooms and accommodations for the maid. The second level boasts a second bedroom and living area, a working area, a dressing room, a lavish master bedroom and a roof garden that provides magnificent views of the surrounding environment. 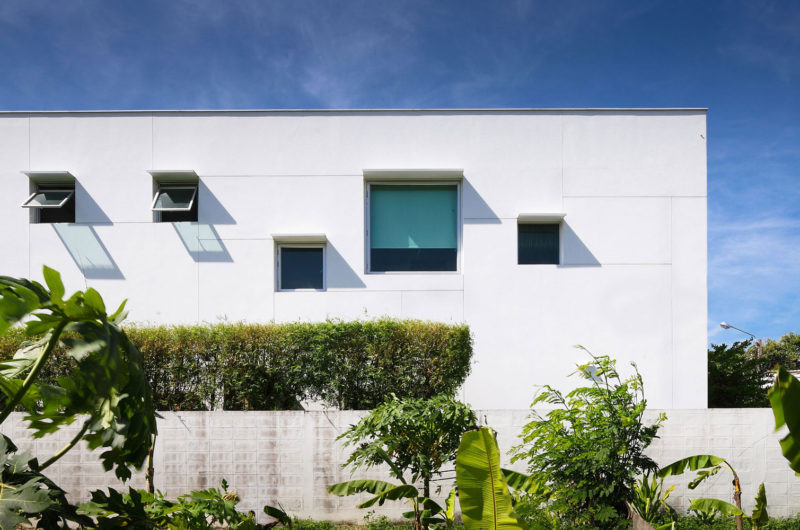 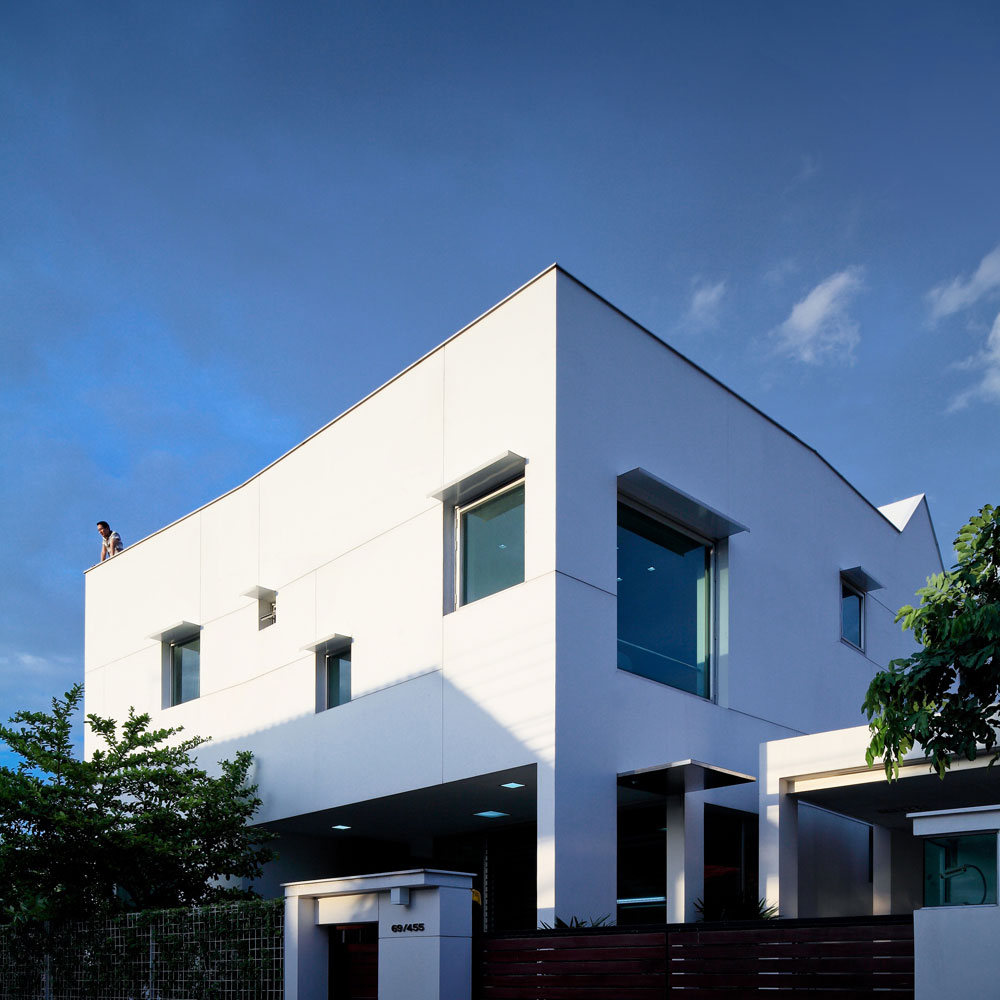 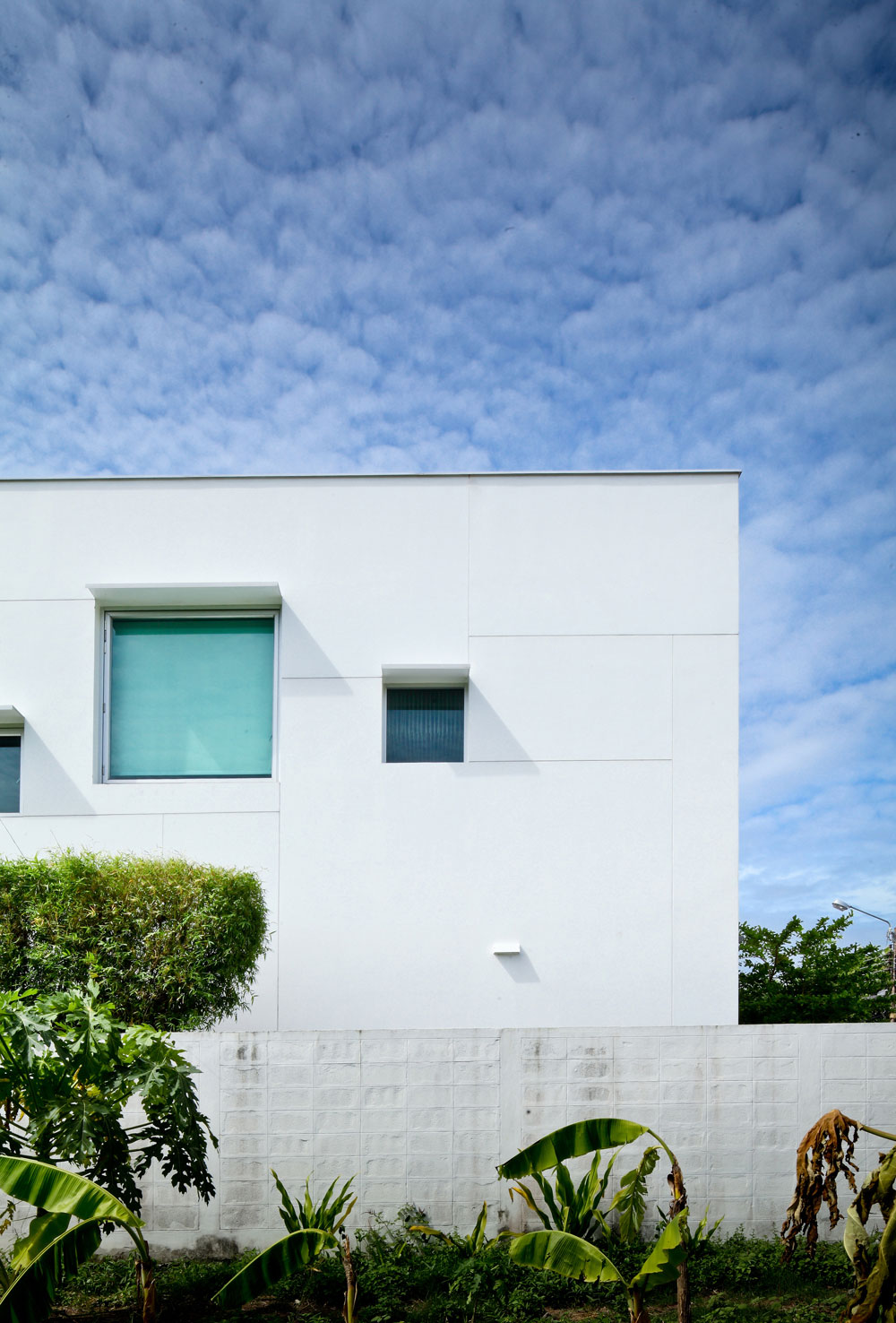 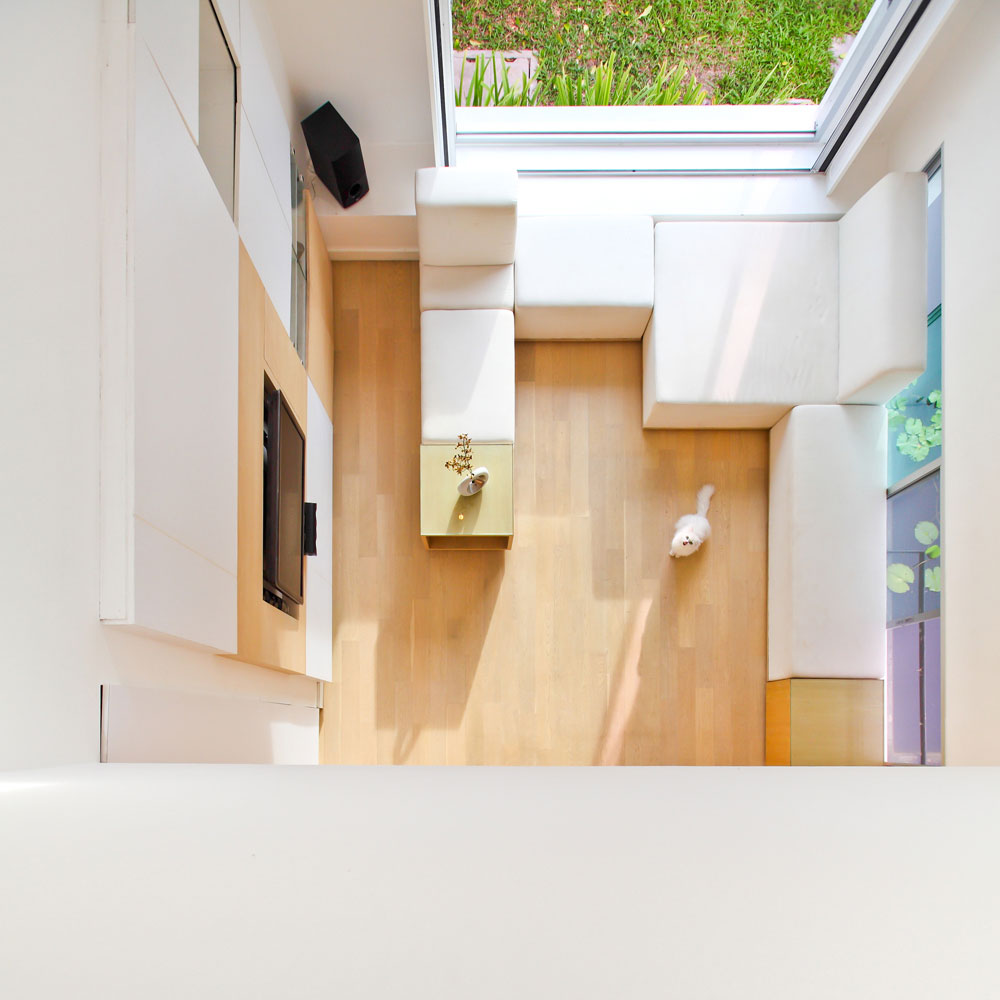 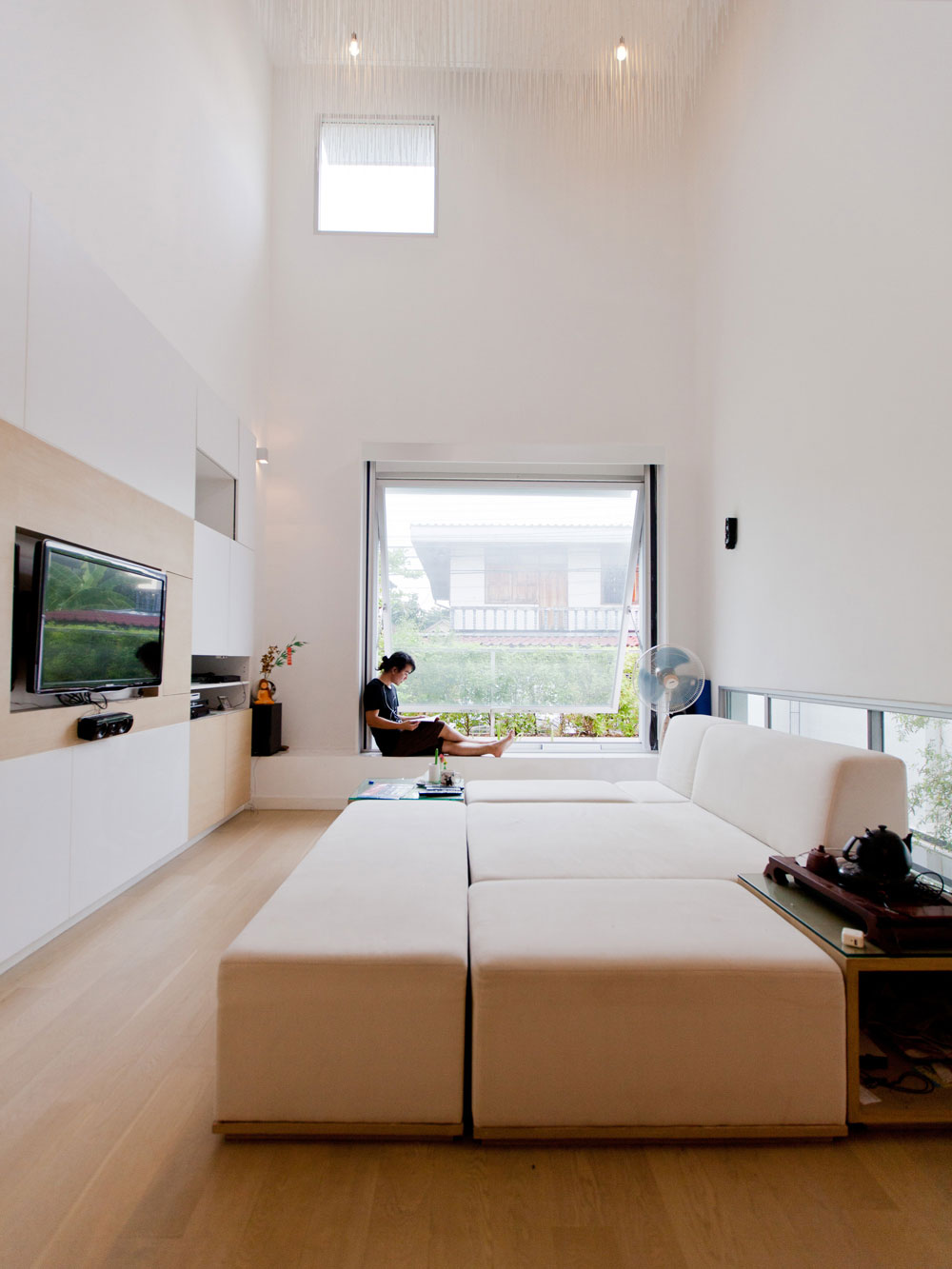 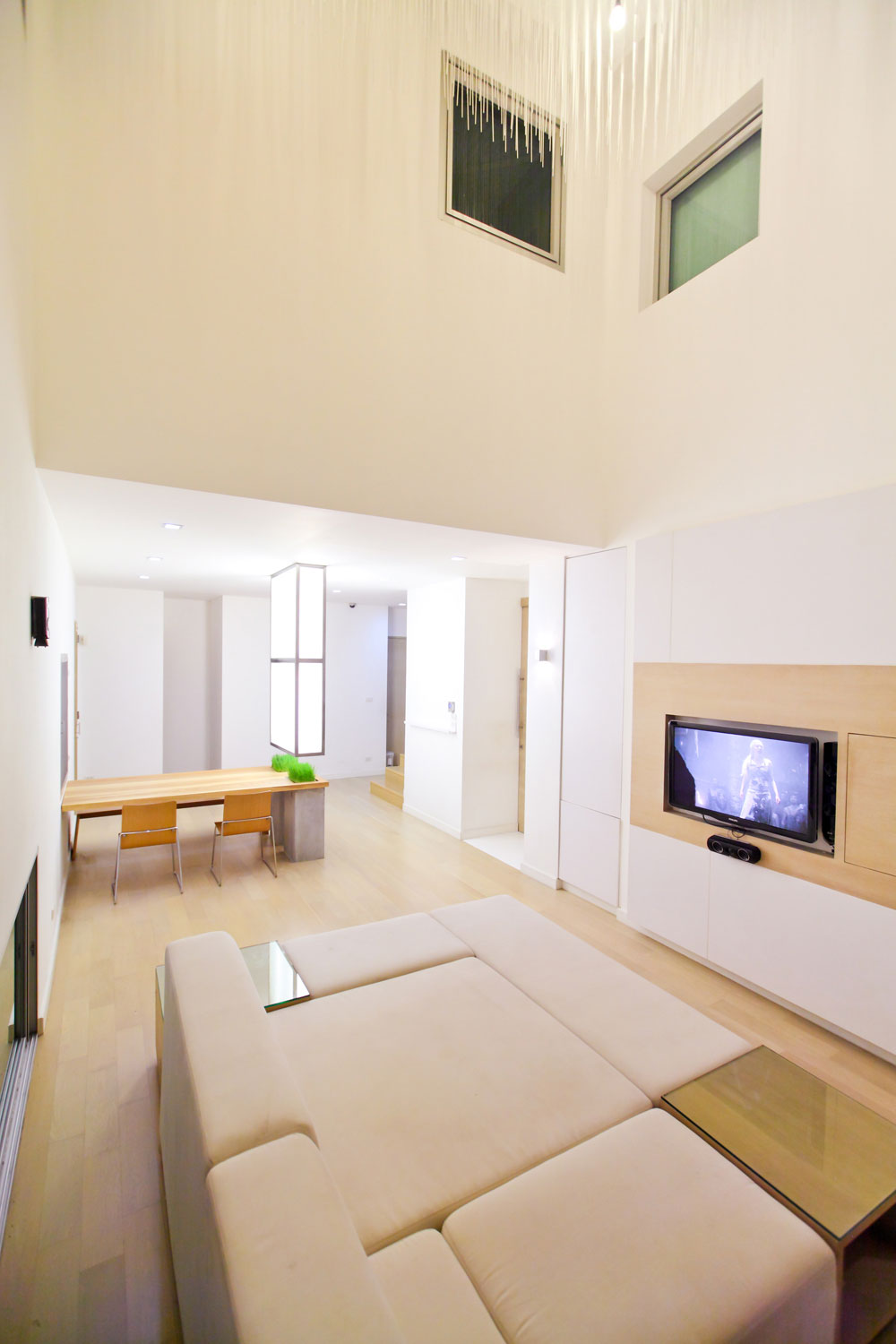 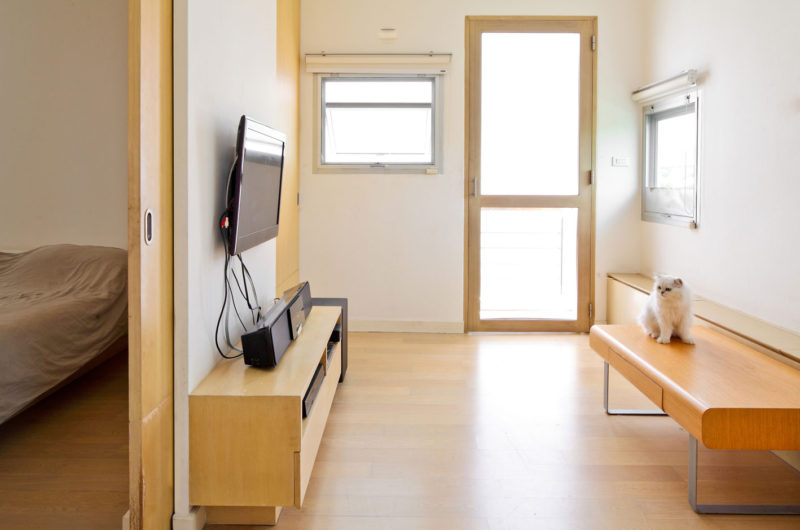 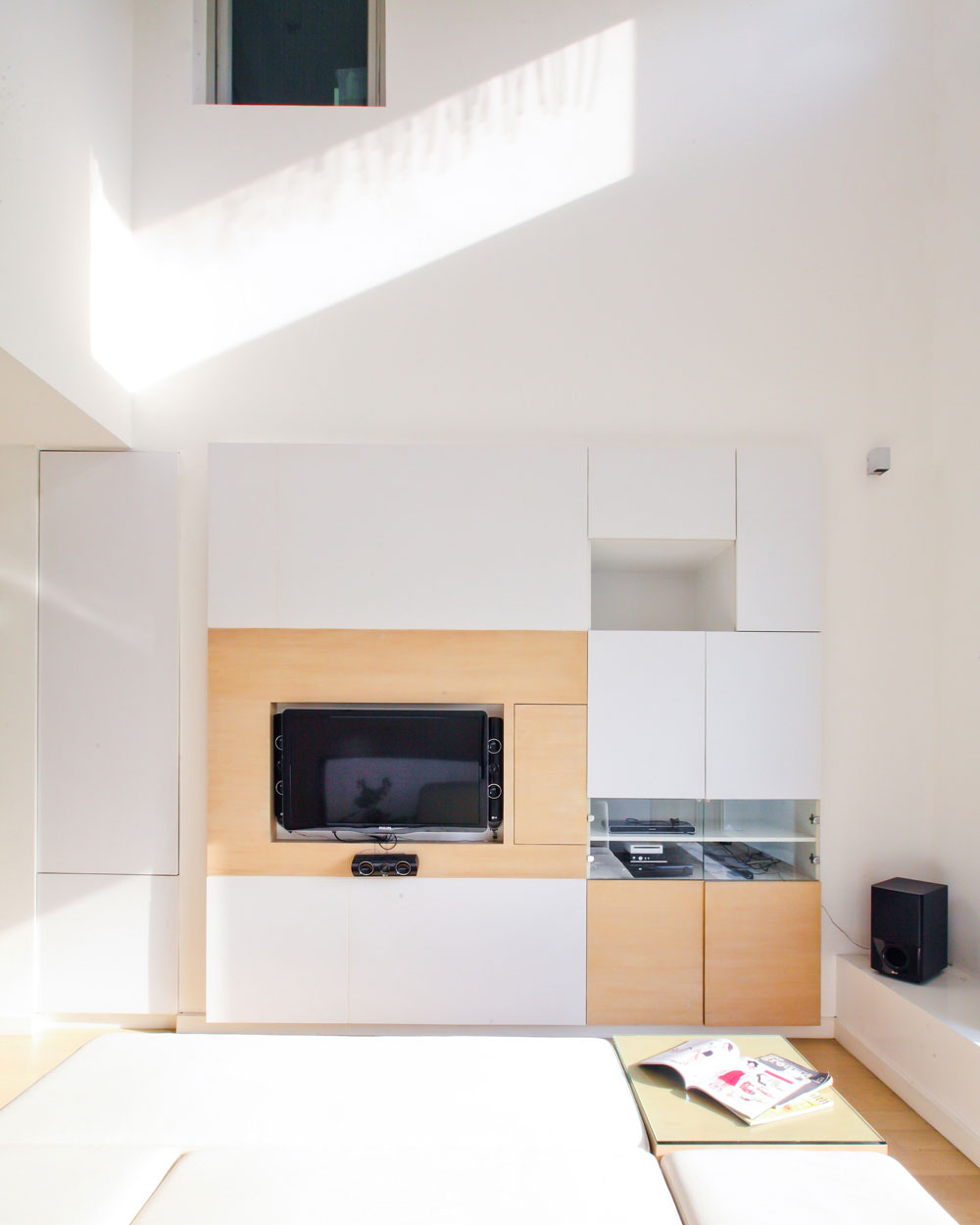 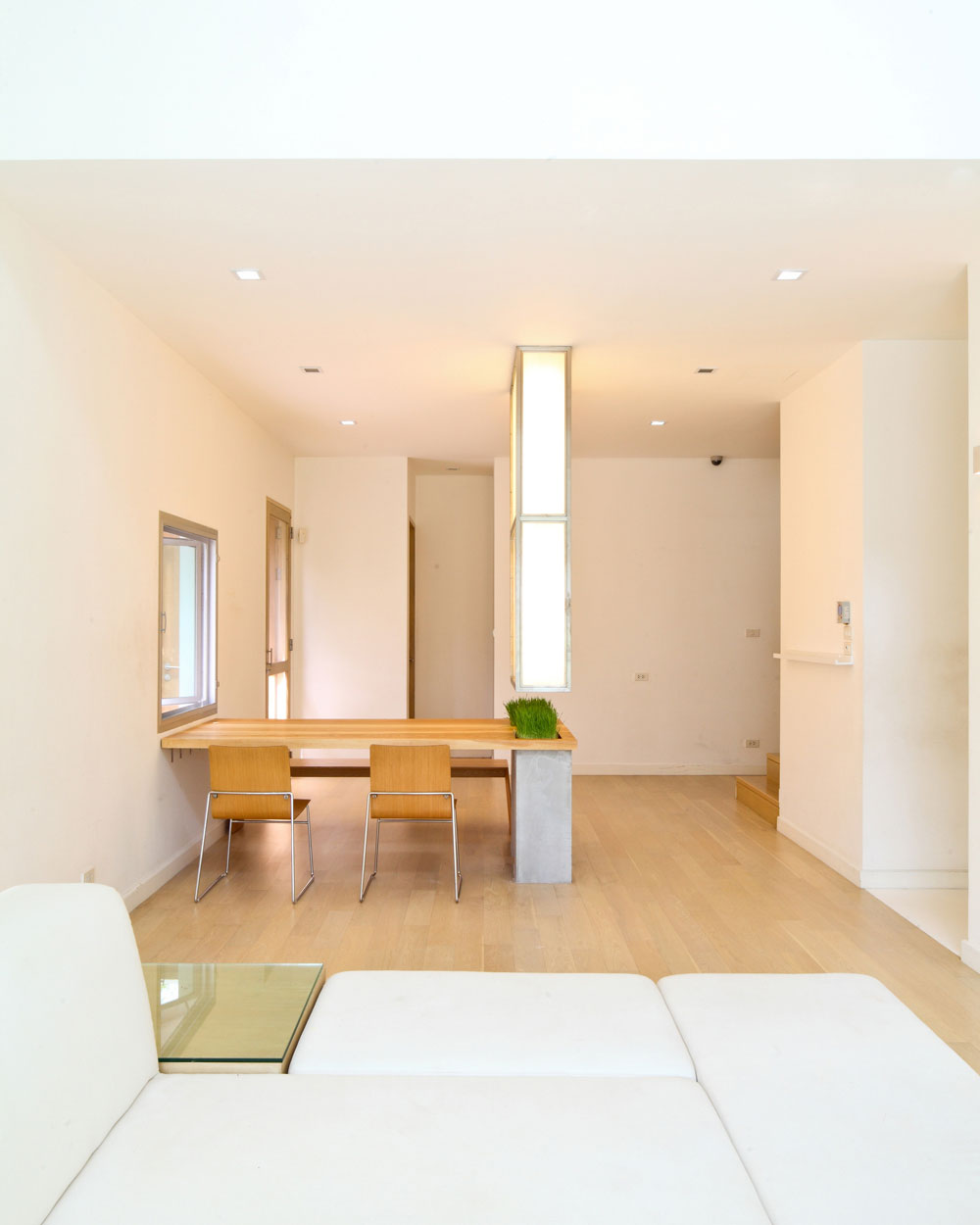 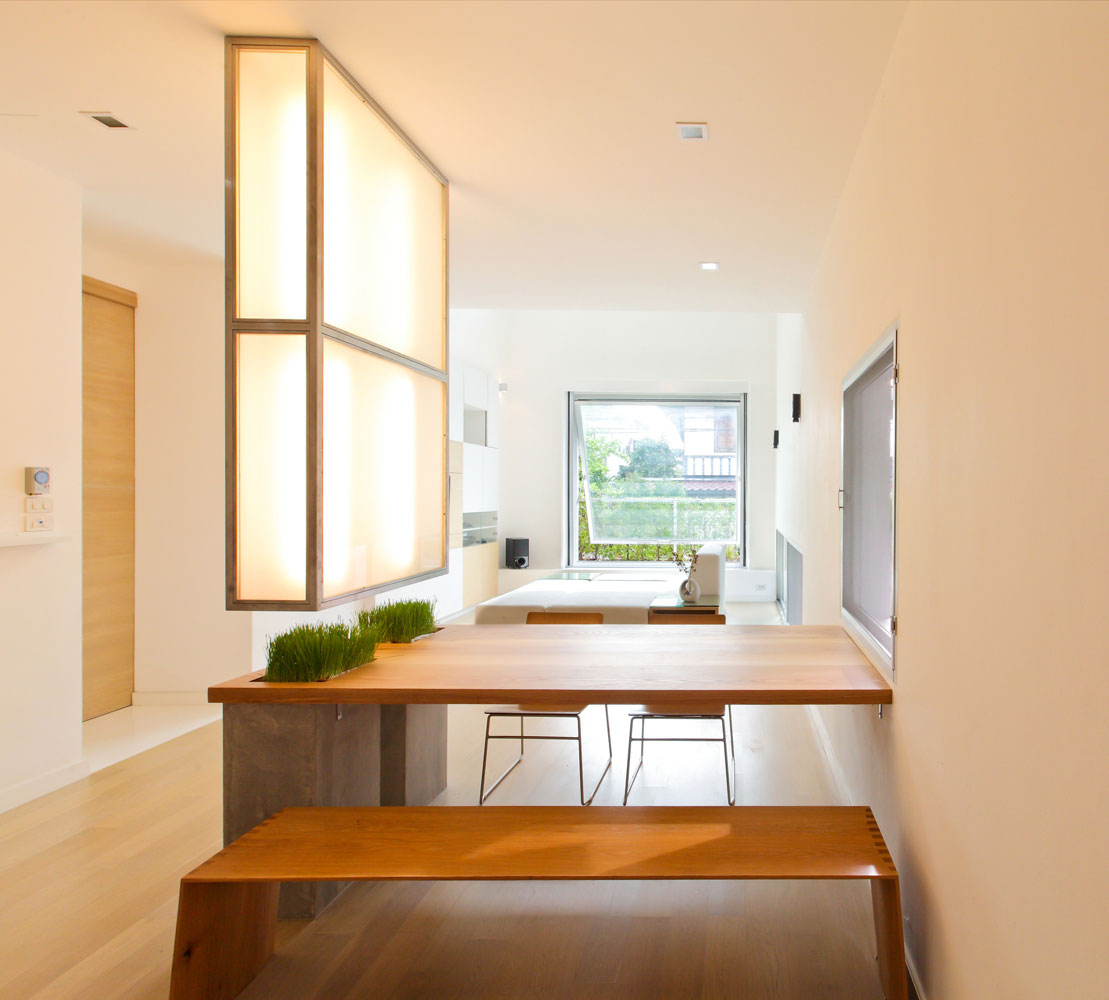 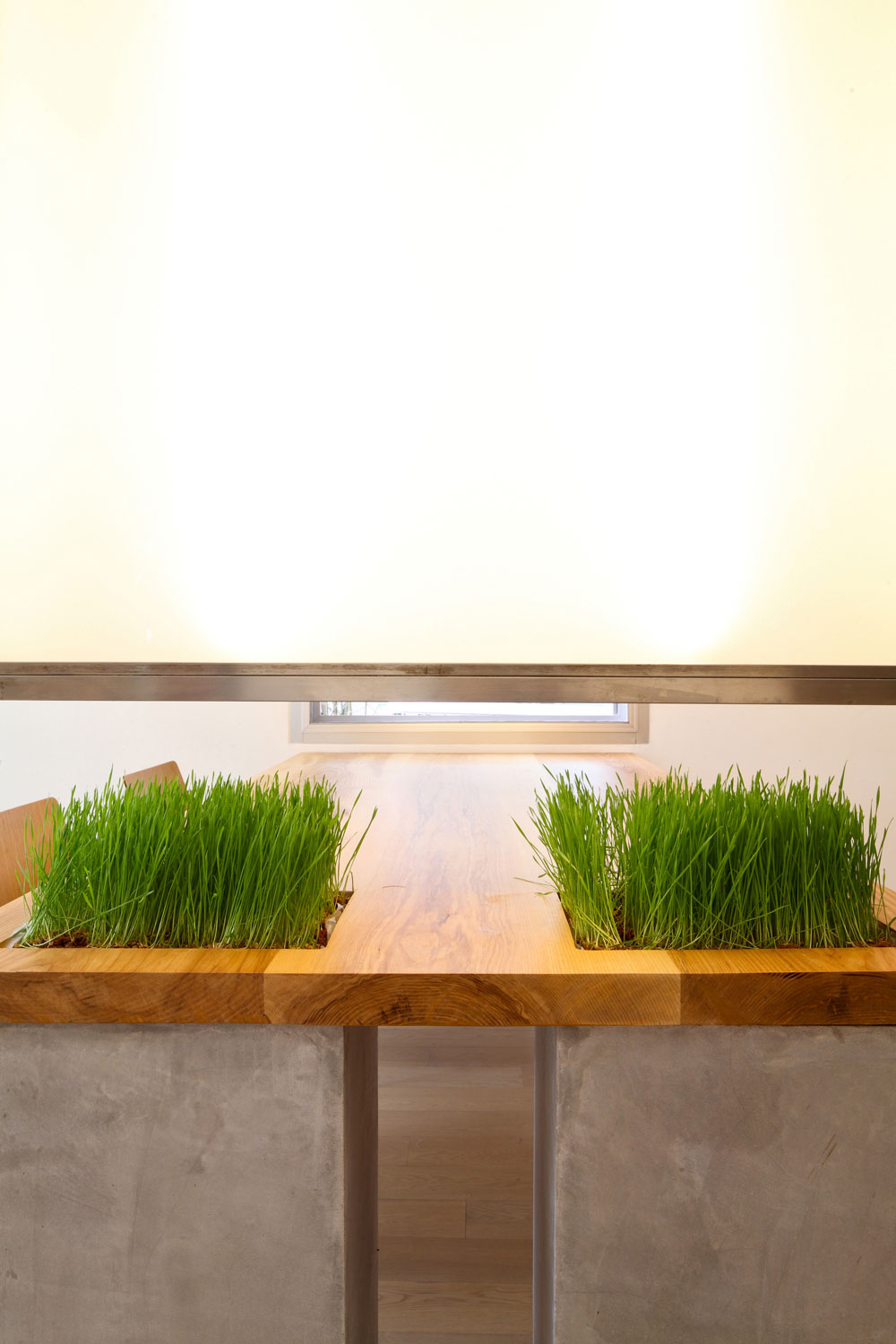 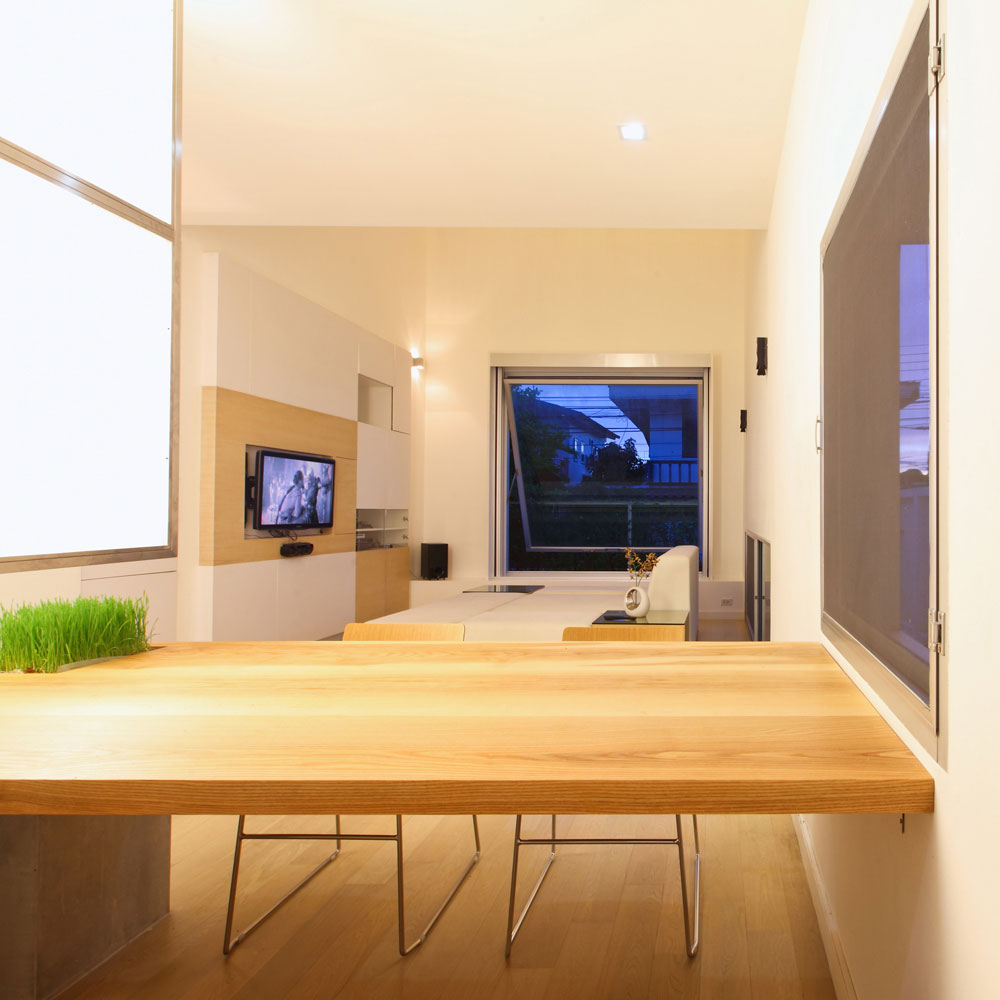 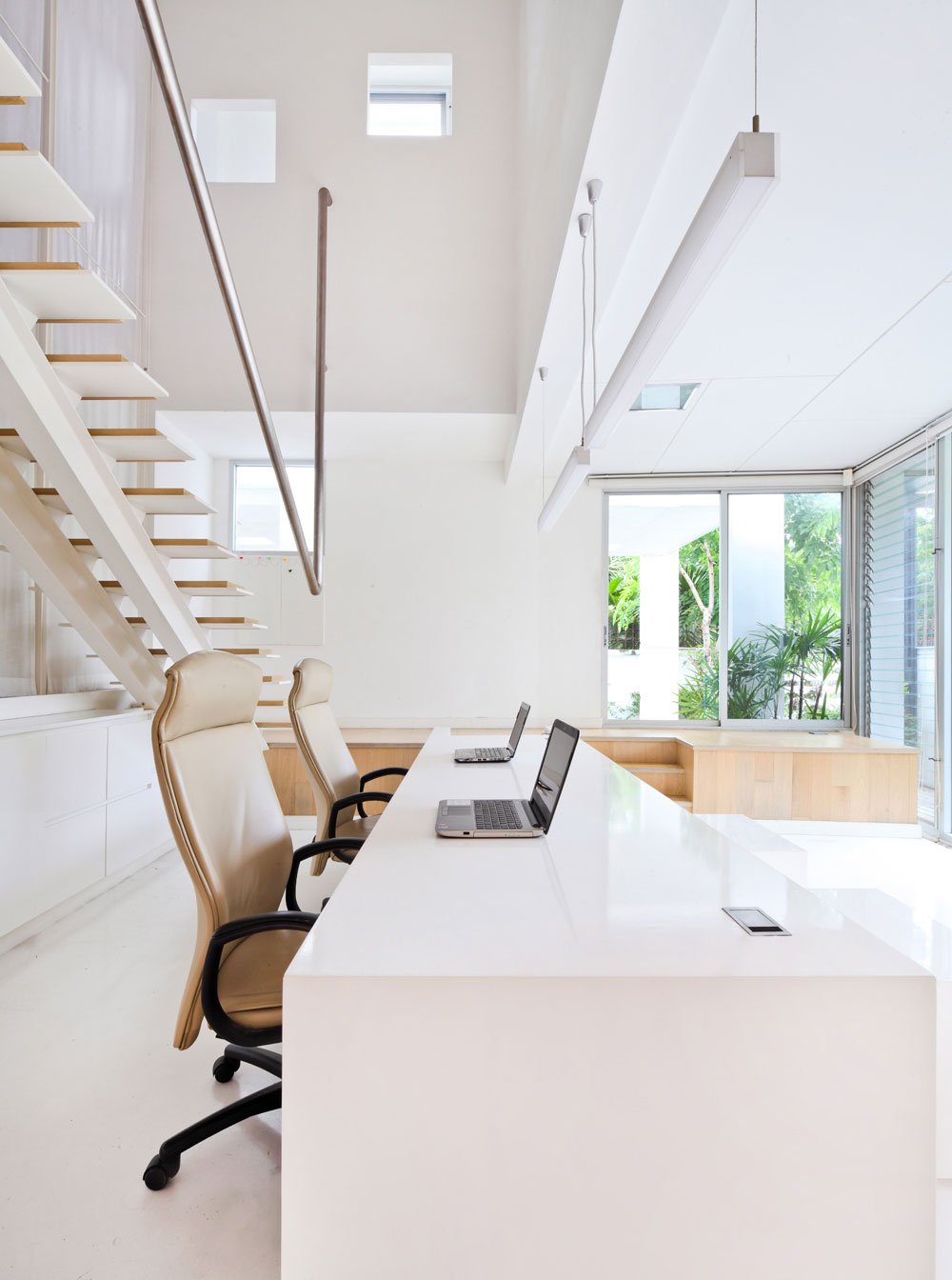 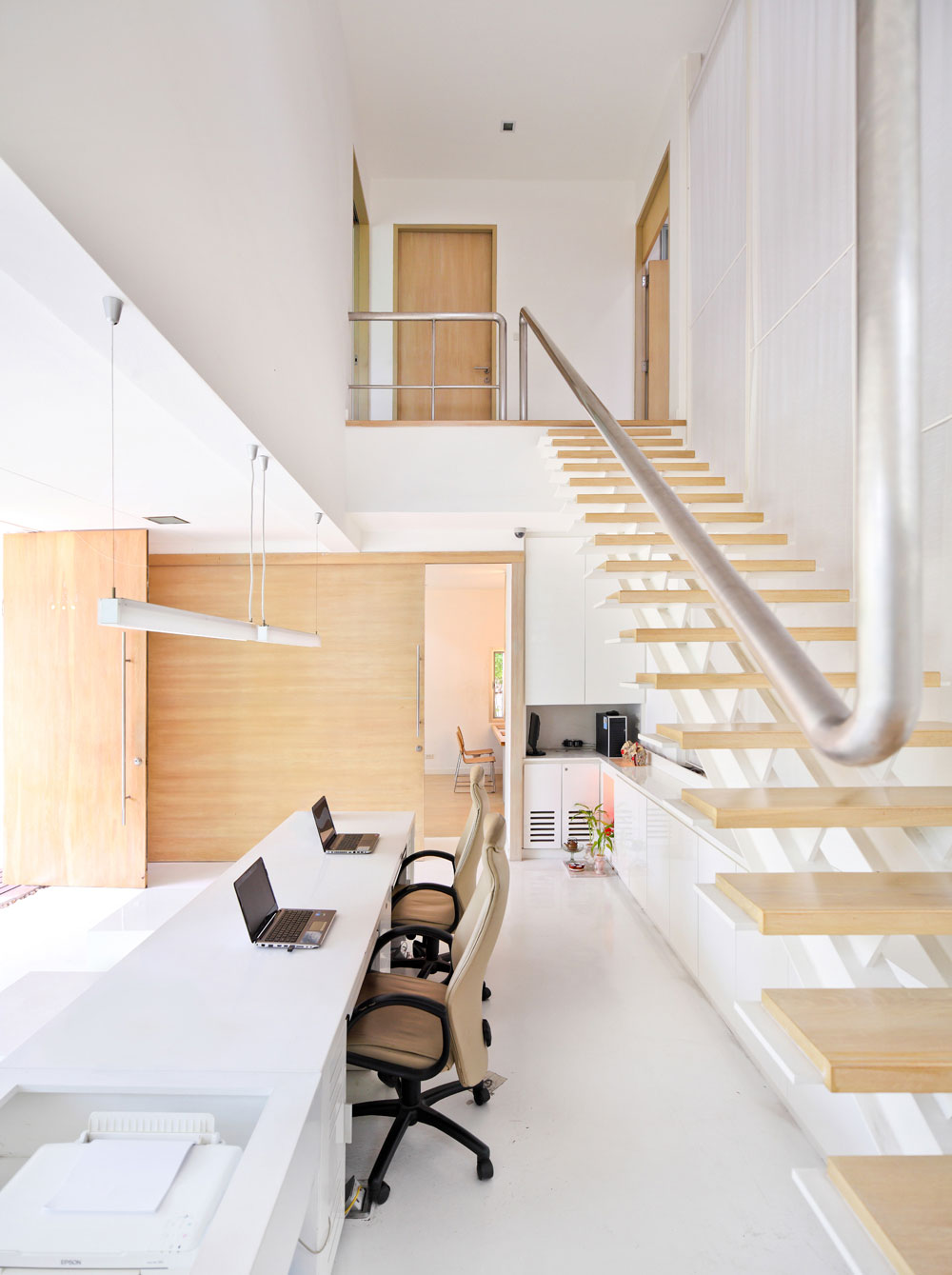 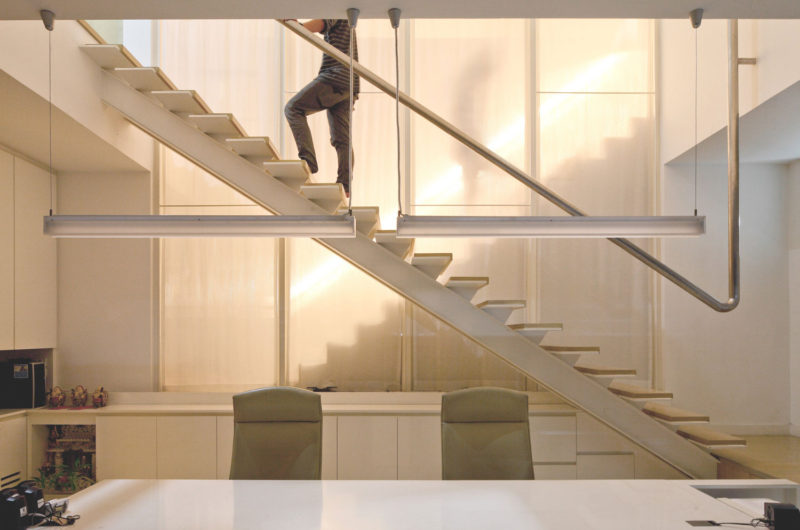 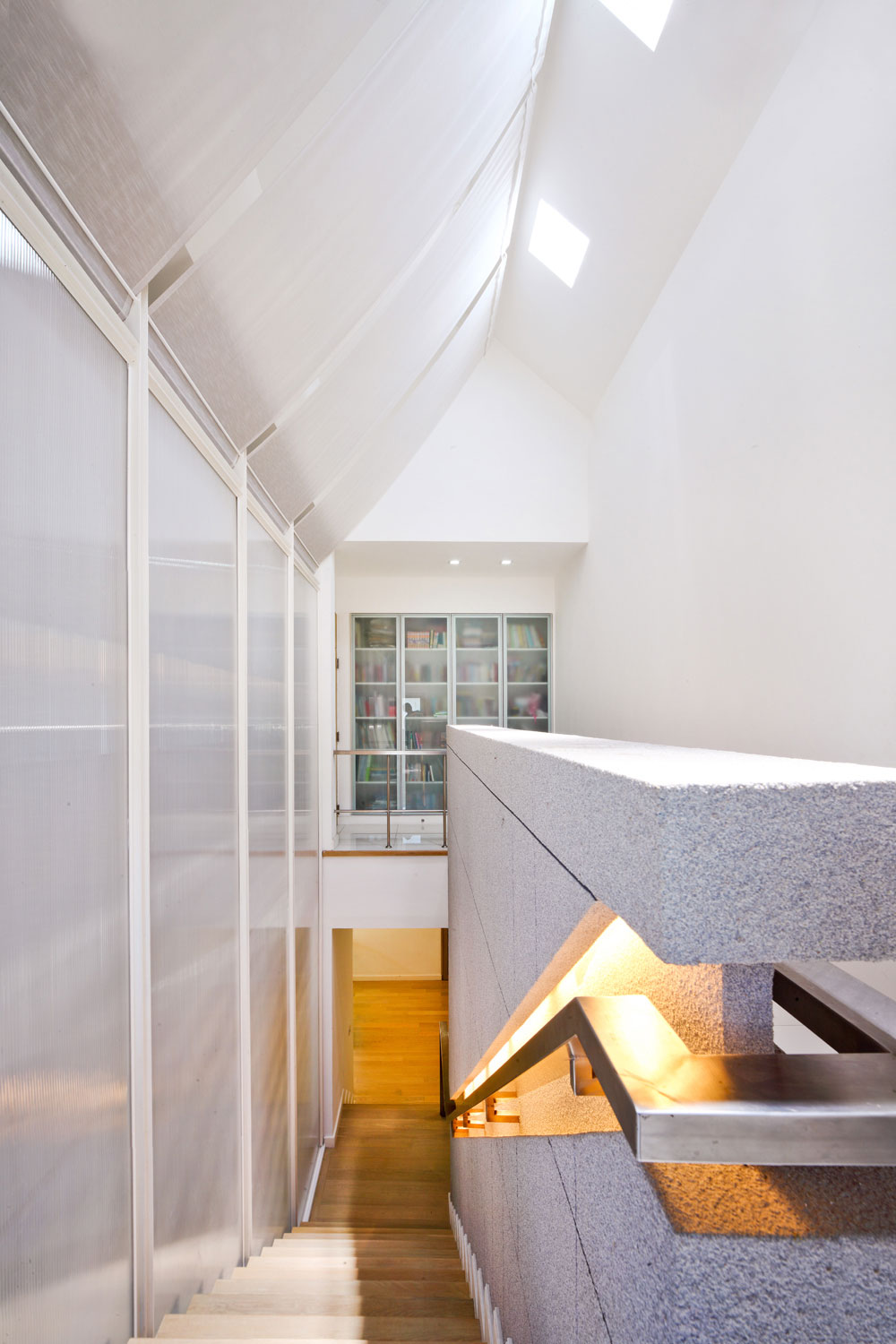 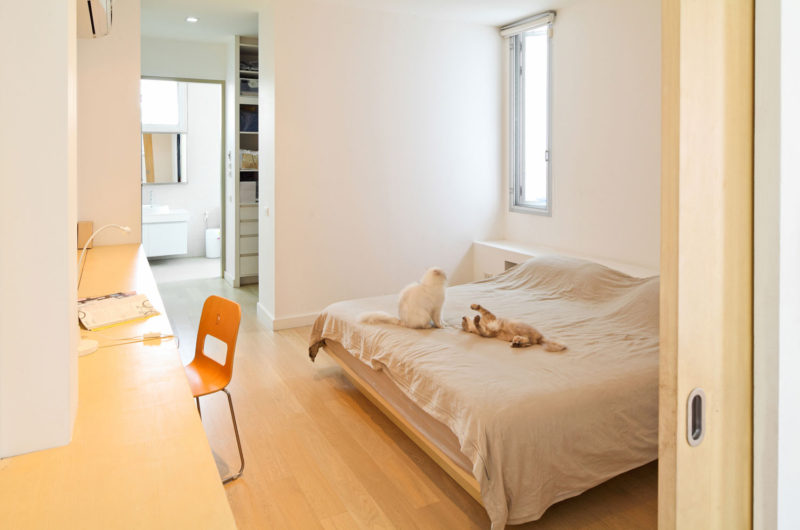 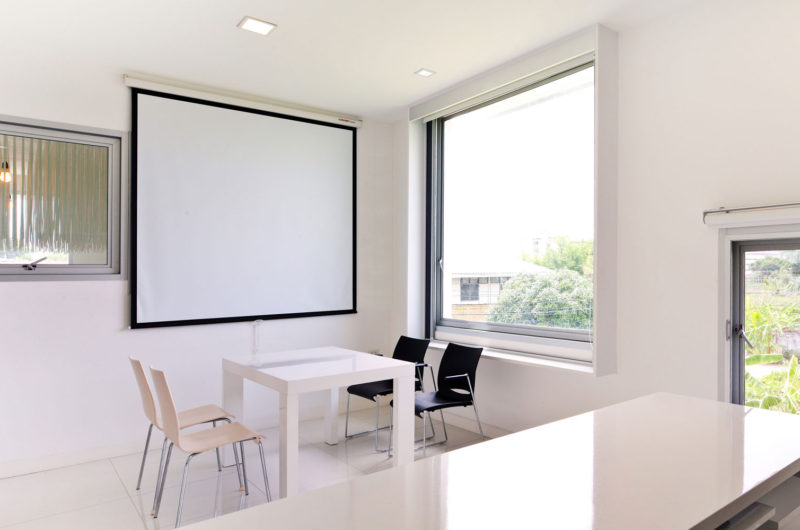 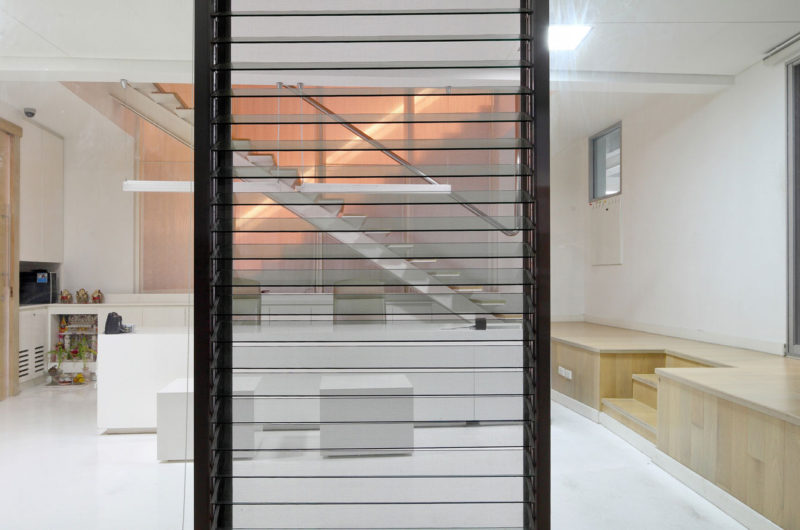 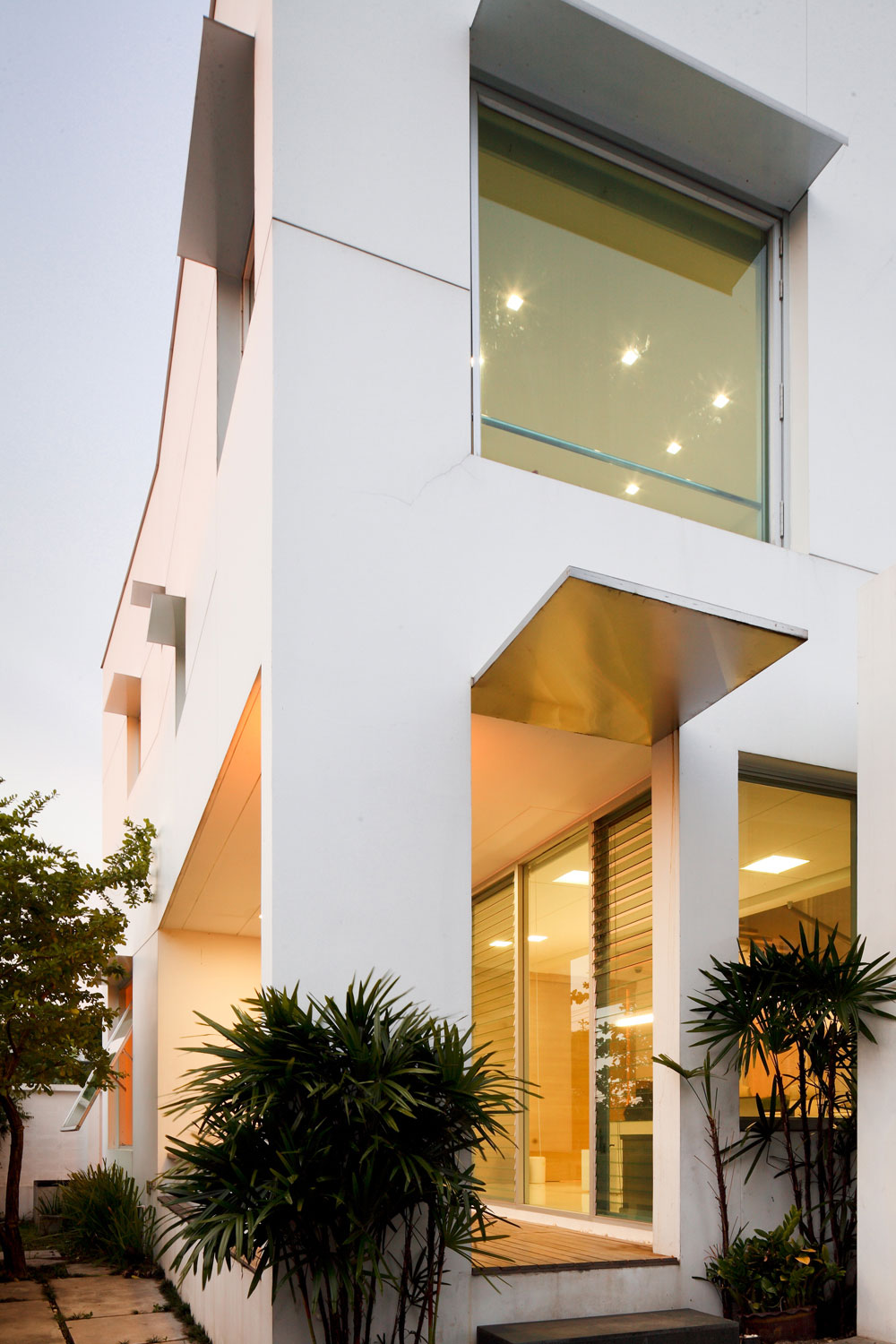 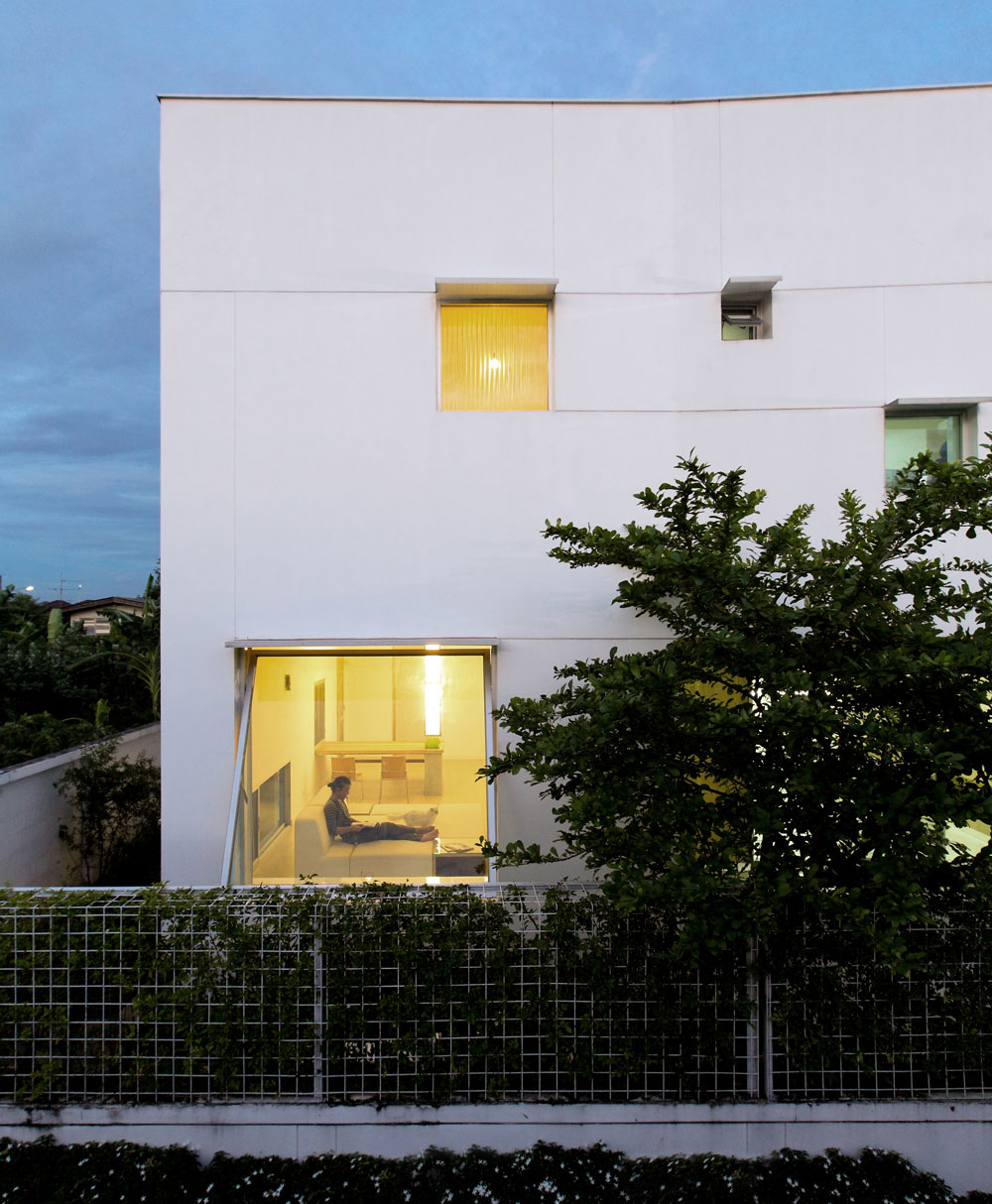 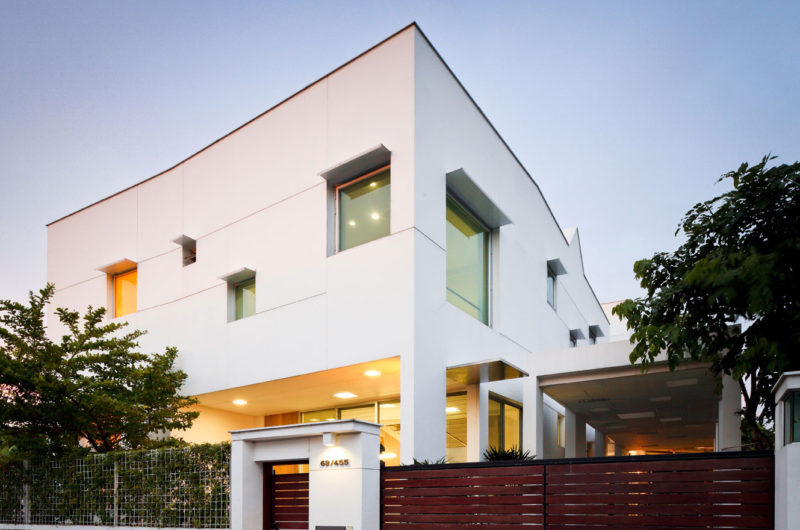 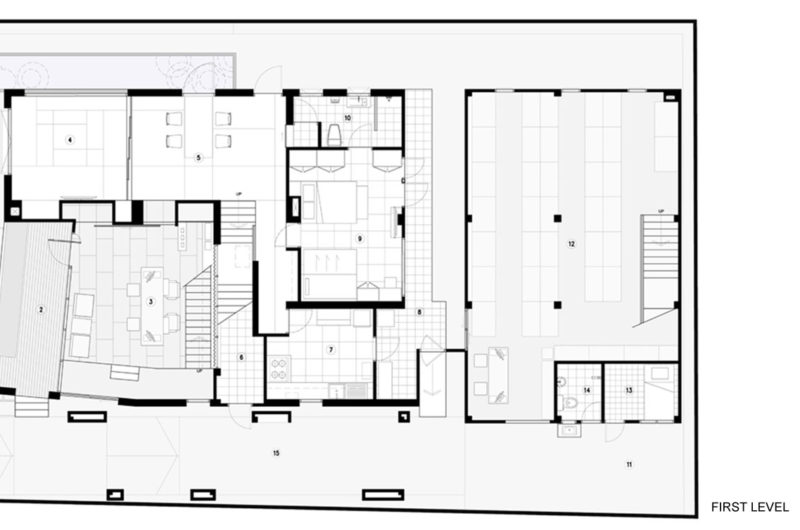 An office, a warehouse, plus a residence for family expansion.

According to an initial requirement of the project owner, Khun Noppawarat Pornputhakul, the main functions of T-House were created to support her family business, a cloth wholesaller from Pratunam District. To maintain the circulations and routine of the old house in Nonthaburi Province, a new built needed to be not just only a residence for an expanding family plus a small garment storage, but also needed to include an additional space for a new office and prepare an area for a further phase of family extension.

To aggregate the owner’s aspiration with a design, NOTDS pulled out the essences of Pornputhakul family and blended them together with Thai living habit and Western ideal; a mixture of a Tropical Architecture with Modernity, to result a simple-formed structure. As a wholesaller of the undergarment, this cloth line was designed to be simple and monochrome mainly using white, grey and black. Because of holding a believe which the underwear needed to be shown focusing on its cutting and fabric more than its striking patterns, thus NOTDS introduced this characteristic through the house with an idea of minimalism.

‘Jai Baan or a heart of the house’ locating perfectly at the heart of this two-storey dwell. This centered piece is composed of two crossing staircases functioning to connect all rooms on the second level. One performed itself laying on a T-shaped layout. It ties the working spaces between two floors together; the main working area on the ground floor and the executive office on the second floor. Meanwhile, another staircase is working to connect the private spaces; living area, bedrooms, kitchen of the first floor, and two bedrooms on the second floor.

At Jaibaan, architects carefully concerned an issue of energy-saving. NOTDS placed three small overhead skylights on the rooftop in order to limit the amount of heat accessing the house. The heat will reach only the top volume of the staircases, the circulation which considered to be the least usage area of the house. Architects also inserted an idea of putting numerous cotton stripes weaving above the stairs. With its material profile; translucent but transparent, it helps screening the direct sunlight to achieve the lower volume. In the same time of representing itself as the iconic of this house, the characteristic of these hanging fabrics remind the dwellers of the famiy business and the history in which the family has been through. The layers of the cotton shadings attempt to separate the public and private space apart, meantime, give the sense of the occupancy between the outsiders and the inhabitants.

By stacking two T-shaped staircases, the designers intended to create the crossed circulation between two zones, the public zone and the private zone. As a result, an executive room on the second floor is able to view the activities of the habitant happened on the ground floor through the double-volume space. Two bedrooms on the second floor were also placed facing each other on the opposite sides. Both are connecting together with the bridge, thus the owner is able to see the working area down below at all time. Living space on ground floor was planned despite the criteria of owner’s mother who would like to have a traditional Thai living room, one that consisted ‘Tang or big wooden sofa bed.’ The designer, therefore, transformed the form of the olden Tang using the western-styled sofa to form a new different shape with multi-functions of sofa bed. The transformation of cotton is also brought to apply with the ceiling pattern to make the house more unique.

The exterior appearance is shaped despite the pure geometric form to reflect each function straightforwardly inside out. The finalized design turned out to be simple and literally symmatry. NOTDS swirled the building shape following to the weather condition; to protect the house from receiving the direct sunlight and heat from the West. The team also designed a high-pitched roof above Jaibaan boundary to express how to avoid and retain the natural light. The position of 30 windows composited around the house were intregrated thoughtfully according to human scale and responding to human functions of which creating the unique views and new dimensions for this house. The design of long roof eaves were derived from Thai traditional element, although the architects had re-designed them to be able to fold and extrude when in need. Made of the 50-centimeter-sized (19.68 inches) Aluminum sheet, it creates the pure clean appearance for the house exterior. Staircase in Luxury Homes can be an abode of Creativity