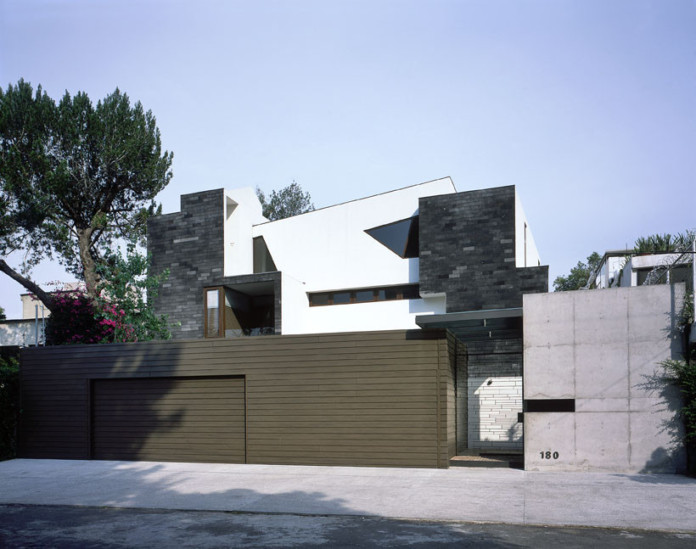 Featuring a bold design envisioned by Mayer Hasbani, the Guadarrama House is a contemporary masterpiece of architecture that was built in 2014 in Federal District, Mexico. The residence was sketched out to be discovered gradually from room to room, and so its private and social spaces are divided accordingly. The garage acts as a buffer between the indoors and the outdoors and boasts a gabion wall that separates the parking area from a pond. 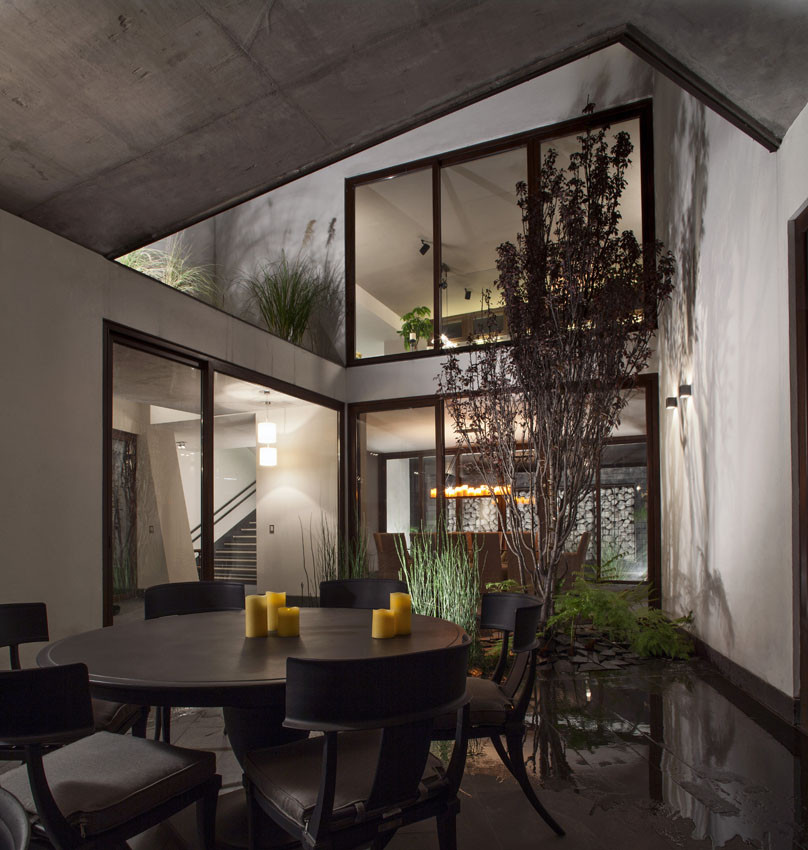 The dining room and kitchen face this pond and allow the owners to feast their eyes on the colorful fish that live within the body of water. The core of the house is a central courtyard, which offers direct access to some of the most important social and private spaces. The residence flaunts 7,211 square feet of living space and contains multiple daring decor elements, including contemporary paintings and statuettes. 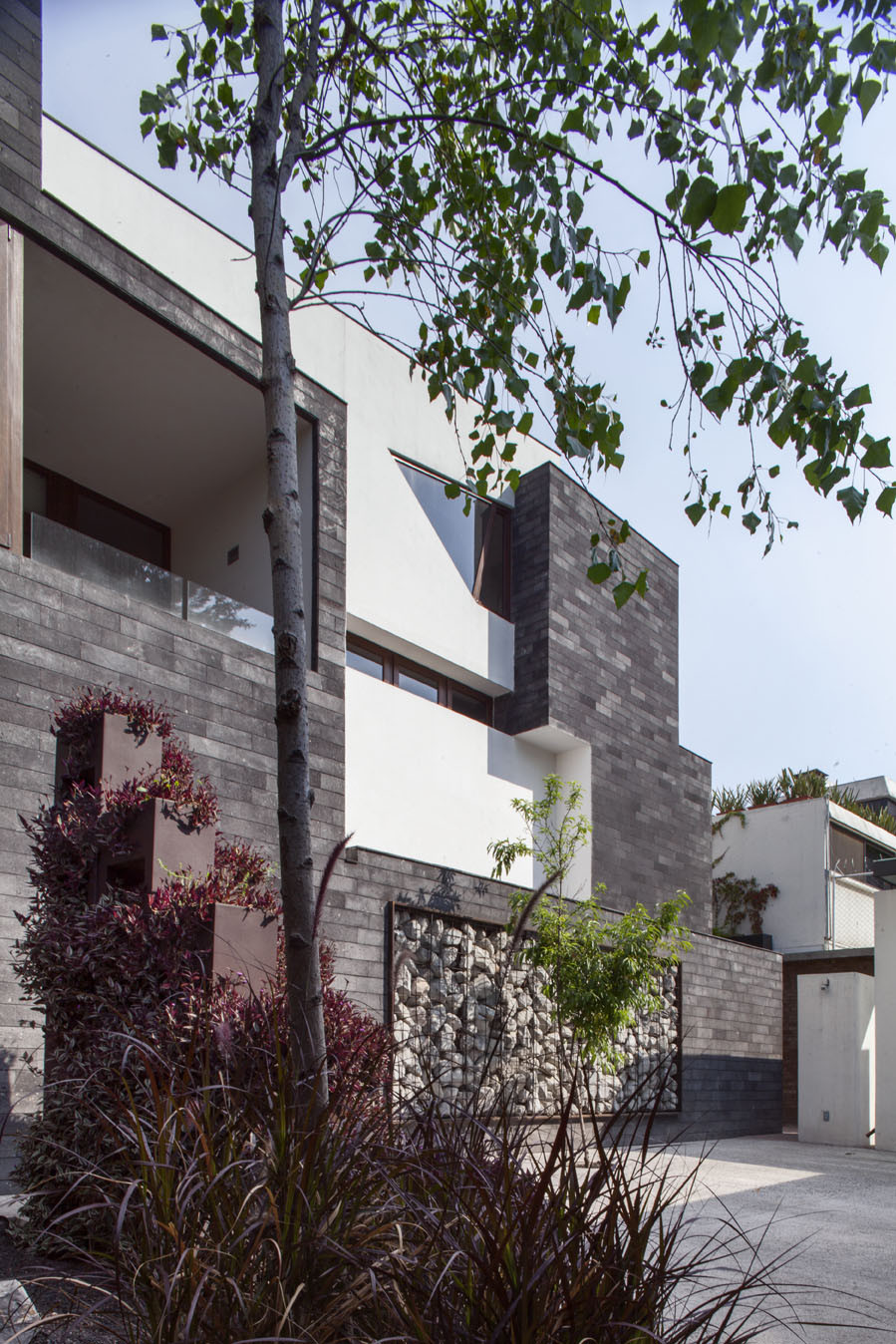 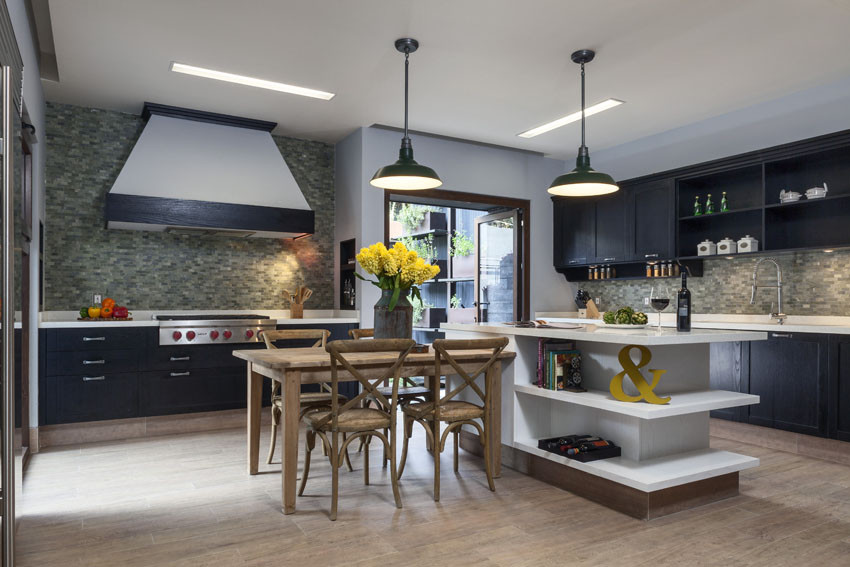 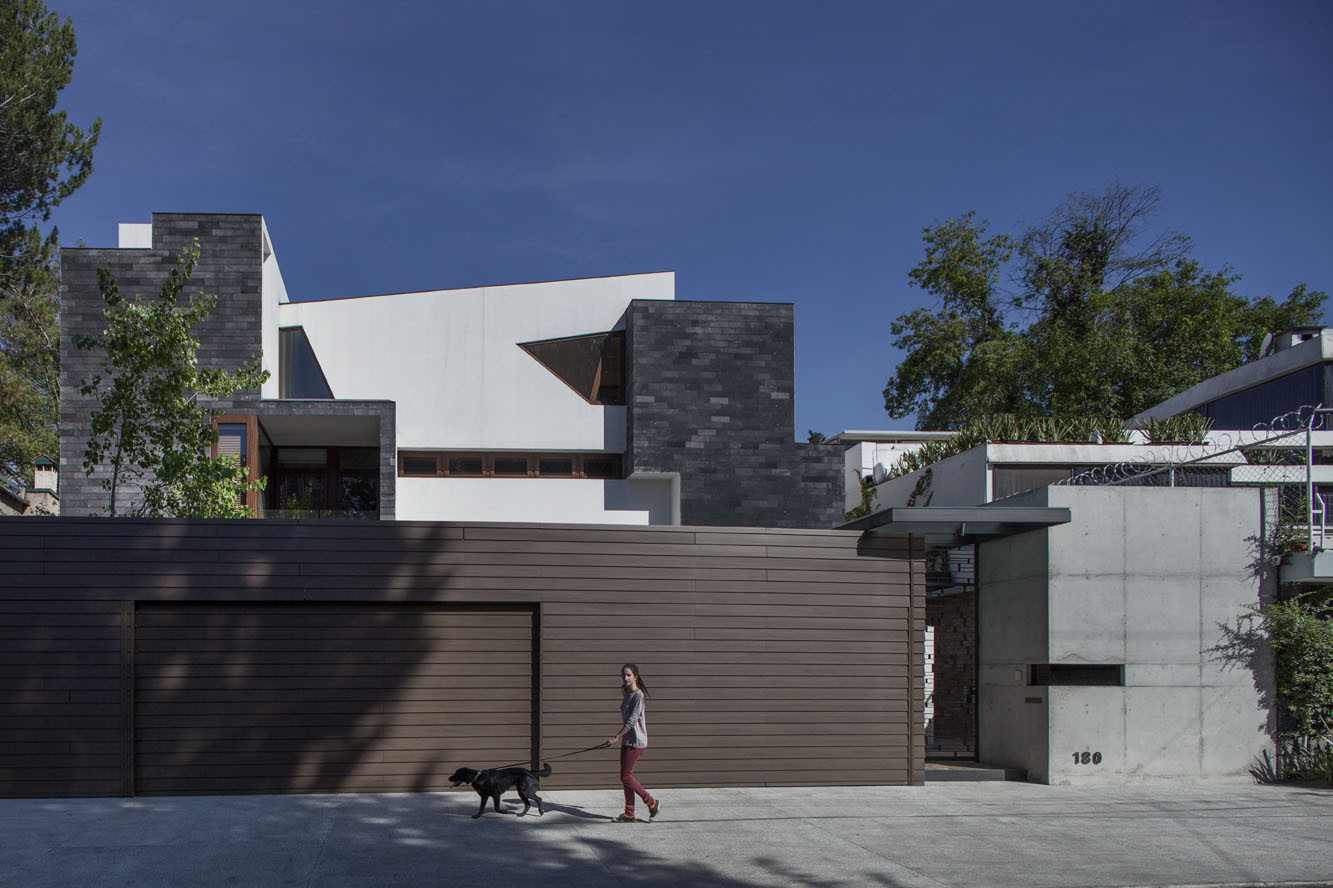 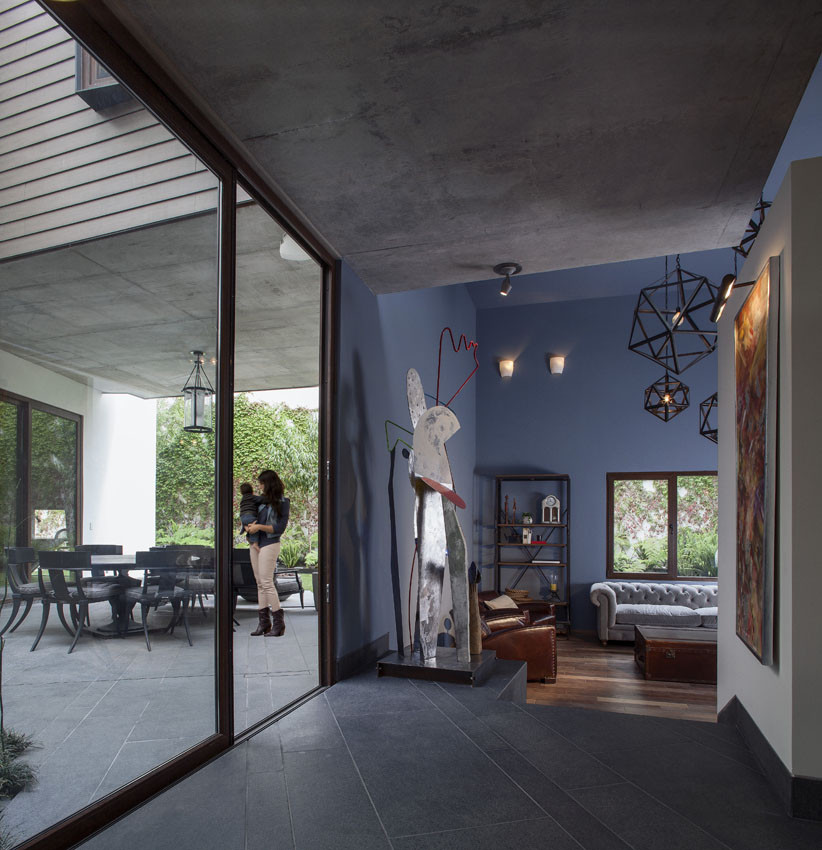 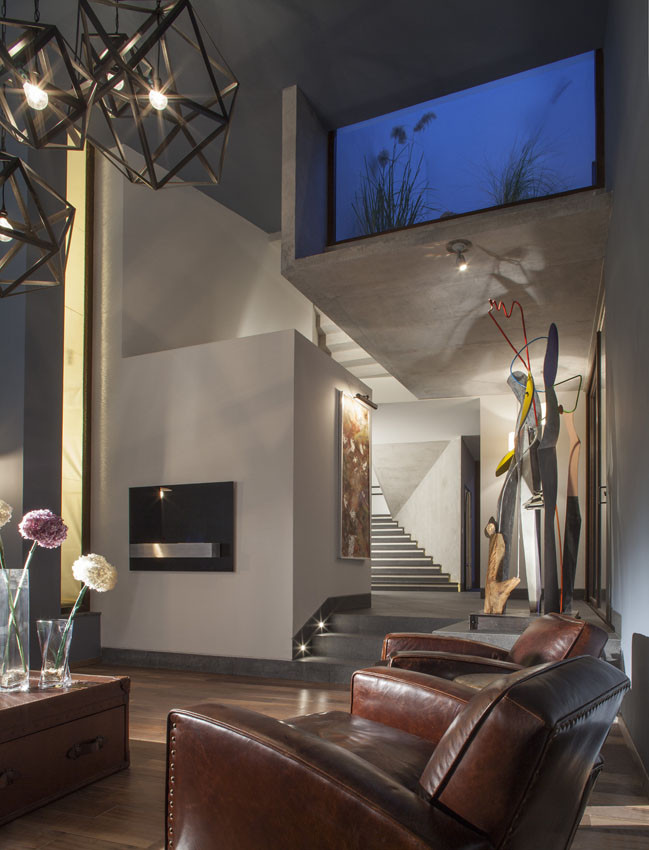 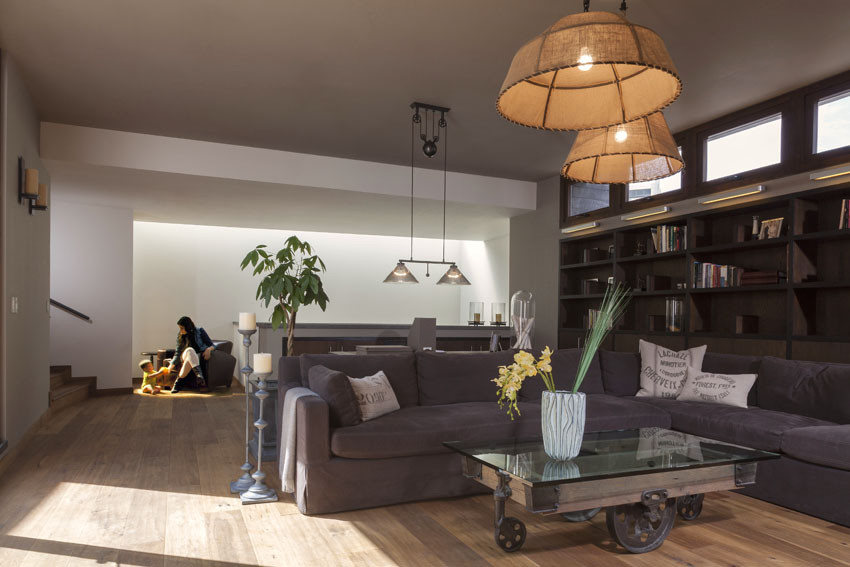 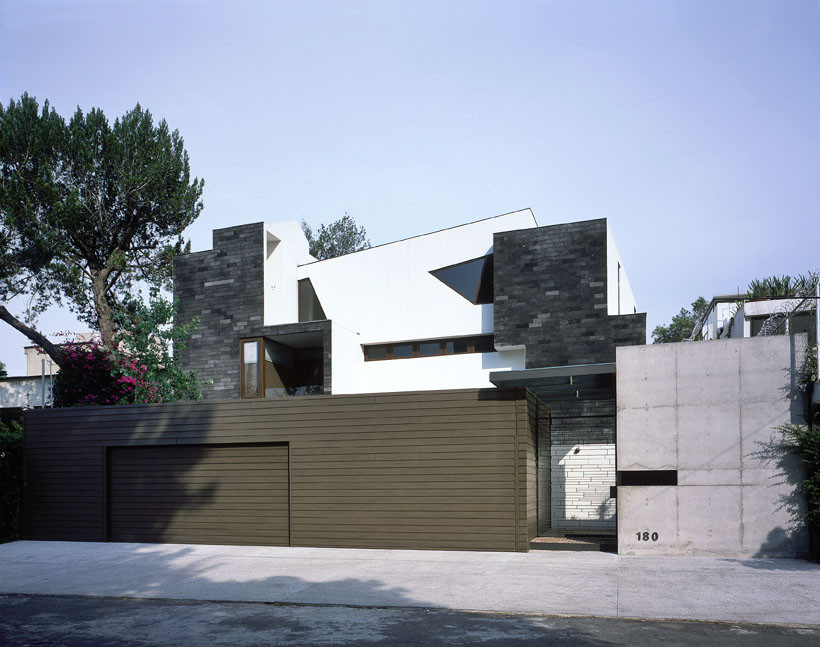 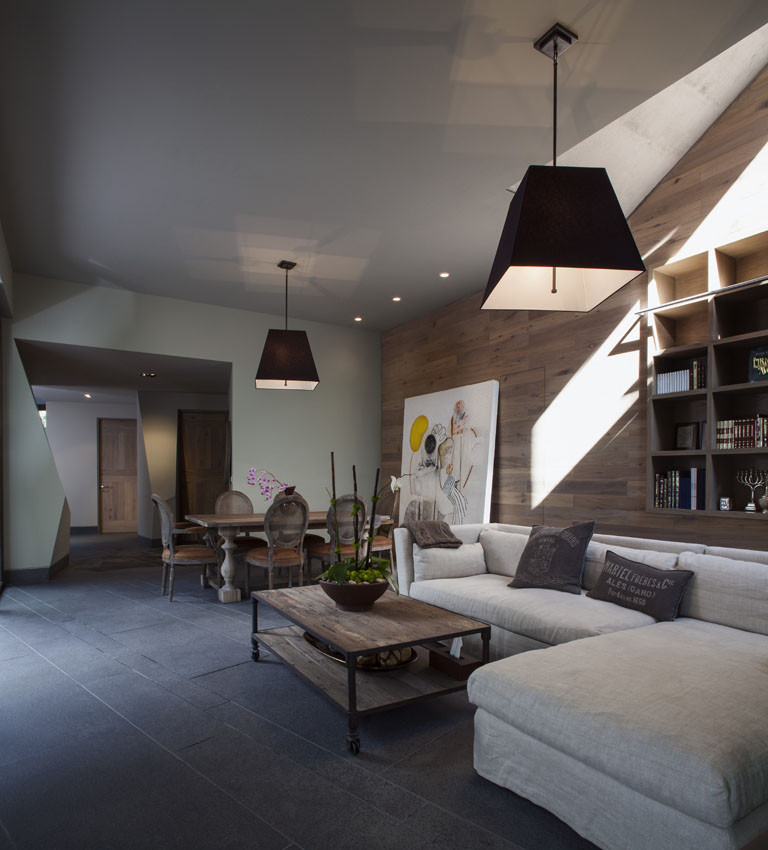 The monotonous rhythm that make up the facades of the houses on Guadarrama Street is broken by an architectural manifesto: the usual in architecture evolves plastically to give place to the Guadarrama House; a spatial poetry in the middle prose. It is an expressionist play of intersecting concrete and granite volumes protruding from their context due to their bold and contemporary design. Unlike other houses on the street, Guadarrama House stands as that new girl on the block: bold, cunning and young.

Through a lattice that allows direct contact between the outside and inside, is the access to the first sequence of spaces. It is a house that is discovered, walked through and understood by exploring its areas. The garage -the first space designed cunningly- is much more than that, it is the possibility of having a buffer zone between the inside and the outside. On one side of the gabion wall the cars are parked, on the other, fish swim in a pond that integrates an entire ecosystem, which changes the microclimate of the house to tell its inhabitant: you have arrived. This access is only the first clue to discover that the house is made of moments, every space is as special as the next.

While fish swim in their pool, whoever is in the kitchen washing dishes contemplates them. The dining room also looks toward them and likewise the foyer and other circulation areas. This is a house that is never without visual contacts, endings that lead the view and play with the user experiences. MAYER HASBANI achieved a smart game of spaces that pays homage from contemporaneity to the legendary Luis Barragan Studio-House; as if it were a solid concrete block in which spaces were subtracted in the same way a mouse makes holes in its cheese.

The central courtyard is the heart of the project. As the heart moves blood to the arteries, the courtyard controls the development and friendliness of spaces. A sort of panopticon that far from giving the sensation of monitoring colleagues, integrates them to give everyone a sense of being bathed in light in all rooms and neighboring spaces. It is the element that integrates the garden with the terrace, dining and living room, and also with the other floors. The courtyard is between the exterior and interior through a soft threshold that gives a space for quietness. The courtyard is calm while the interiors of the house do not stop moving.

Inside, the circulation core to climb to the second and third floors is a sculptural element that unfolds at different levels in order to use the space wisely, it becomes bridge, or bedroom. With this play of angles and visual flirtation, precise details are achieved provided by the architecture itself, the architecture is its best ornament. An example of this might be the windows, each one is special, each framing a different object and with a particular mission: either contemplate, monitor or seduce.

The bedrooms isolate, transport to another microclimate and other needs of the individual. Geared especially for the needs of different users, children and adults, the bedrooms are a complementary space, for the house is inhabited in its public areas, it nurtures a family culture where what matters happens in shared spaces.

Aware of the complexity of the system, the house was designed to showcase its status of high design, a kind of haute couture architecture. The craft of a thoughtful, well-made architecture is what gives it its aura, is what makes it vibrate and function. Despite being an overlapping project that sometimes seems a tale of magical realism, -where one does not know how or from where one came to a certain space-, there is not a single moment of the house that does not have a precise meaning for the user.

The icing on the cake of this architectural project is certainly the dignity of the spaces, the respect that is found in every corner of the house. The distinction between public, private and services does not exist. While the spatial hierarchy is treated with importance and elegance, dignity makes the service staircase a staircase with friendly proportions, designed and bathed in light as the rest of the other spaces, the same happens for the services and all storage and circulation spaces. All residents and visitors to the house are important, the human scale designs each of the rooms.

Guadarrama House is a discovery in a residential traditional street in the western part of Mexico City, while it is also a succession of discoveries inside. Its inhabitants will not get tired of walking every day through the same spaces, as even the seasonal vegetation is designed to develop the house, the same way a family grows and evolves. 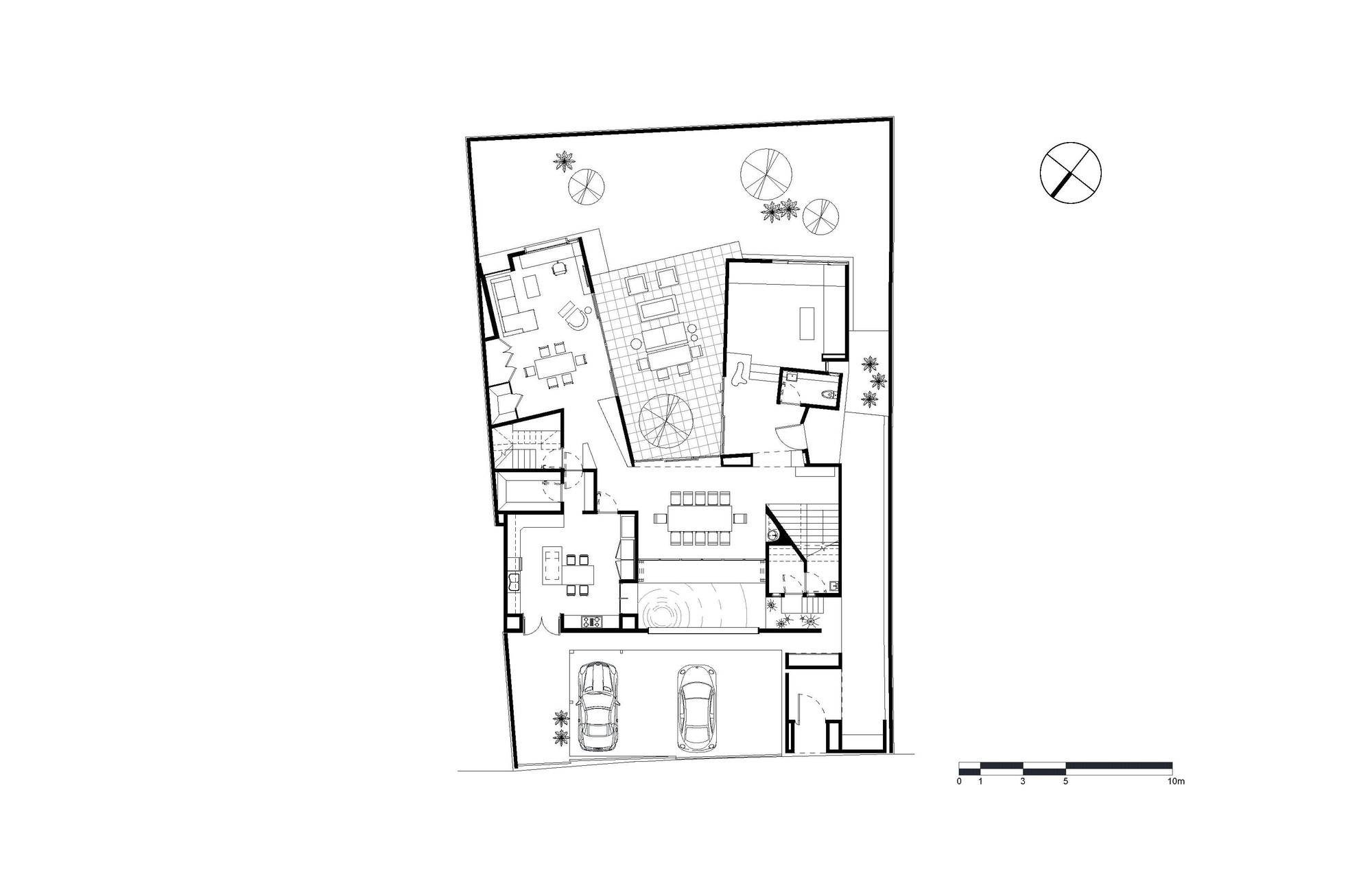 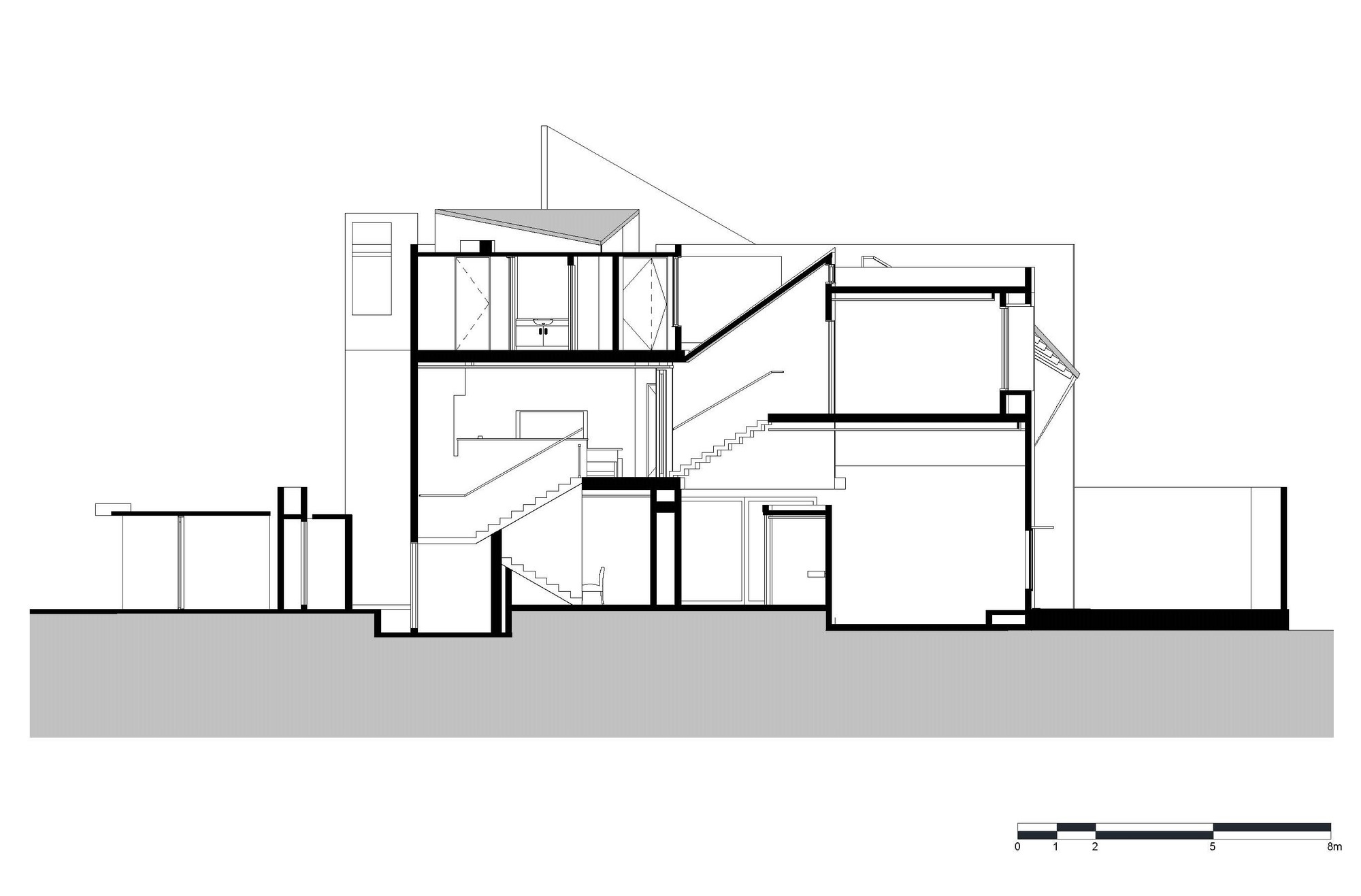