This modern, spacious and comfortable house is the result of an ingenious design that was sketched out by architects from ZD+A led by Yuri Zagorin Alazraki. The project was completed in 2011 and can be found in Federal District, Mexico. The residents are able to enjoy 5,080 square feet of living space as well as a plethora of high-end amenities, spacious rooms, modern decors and impressive technologies. 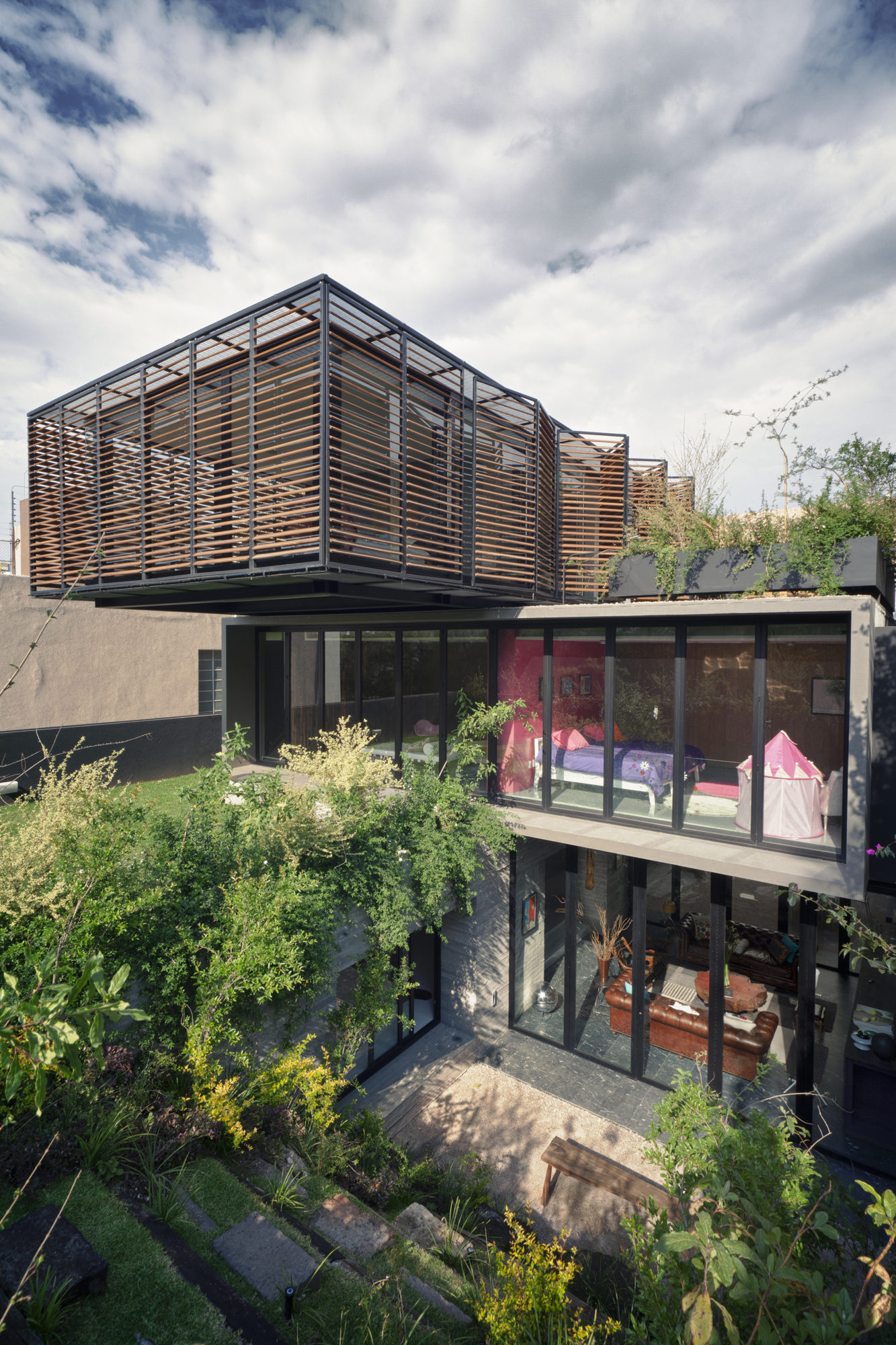 This is not a simple home, that much is certain. It boasts head-turning details throughout whether we’re talking about its boldly colored living room decorations, high quality leather sofas and chairs or American oak panels. Floor-to-ceiling glass windows allow the residents to admire beautiful views of the outdoors without having to step outside. The living room connects to an outdoor terrace that features a wooden table for six surrounded by natural plants.
Apart from this terrace, the residence also flaunts a rooftop terrace that can be accessed with the help of an interior staircase. 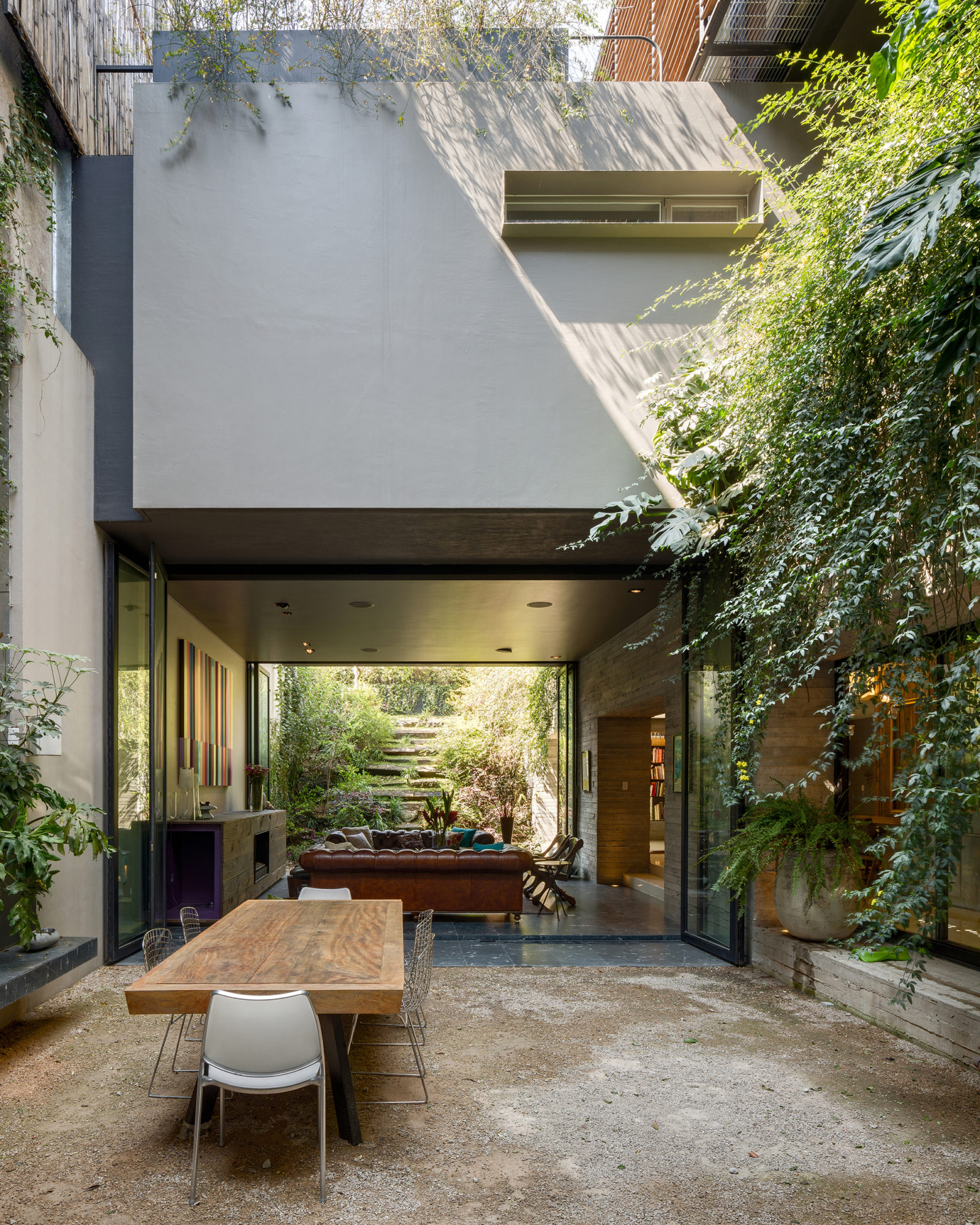 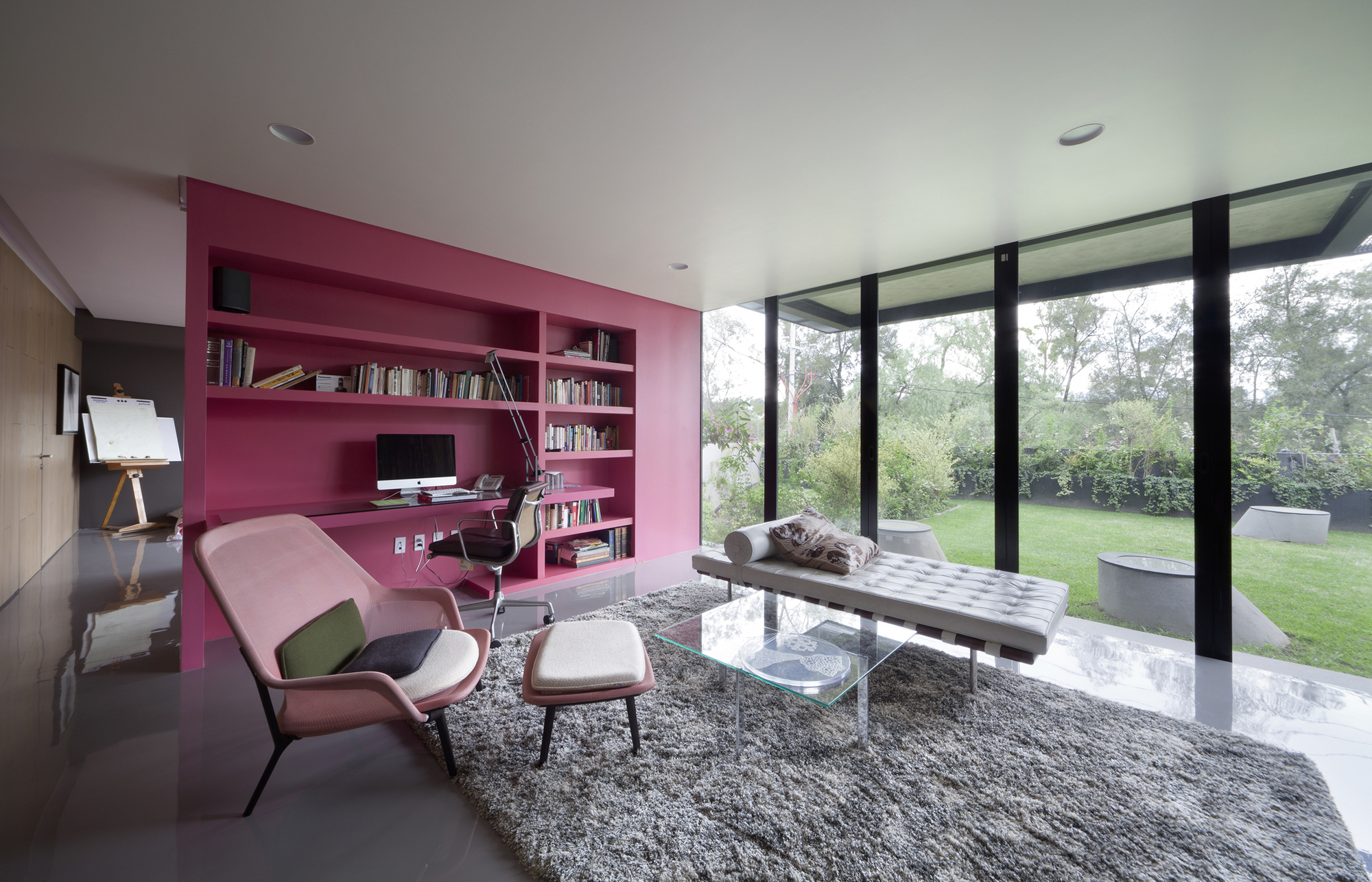 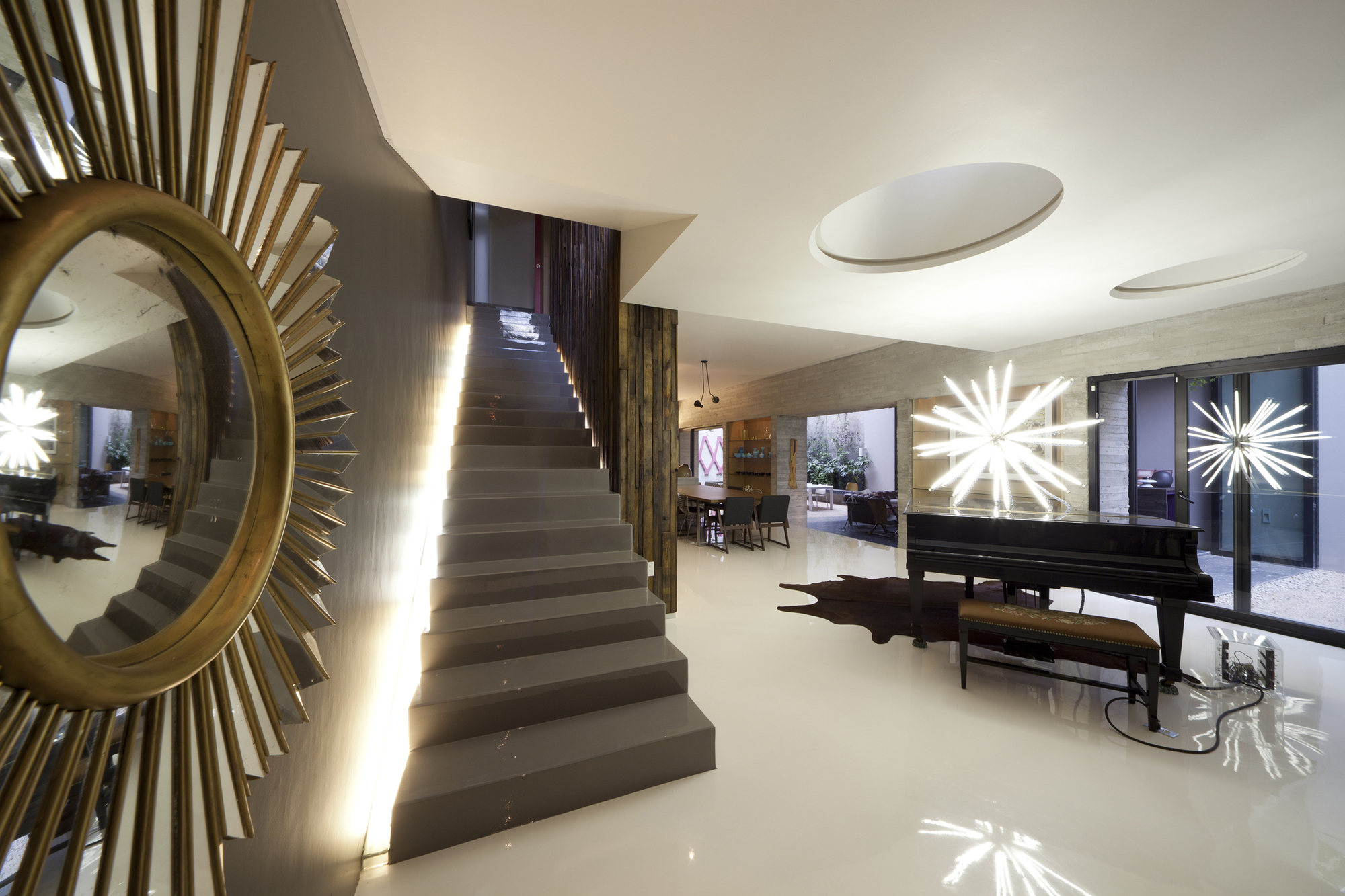 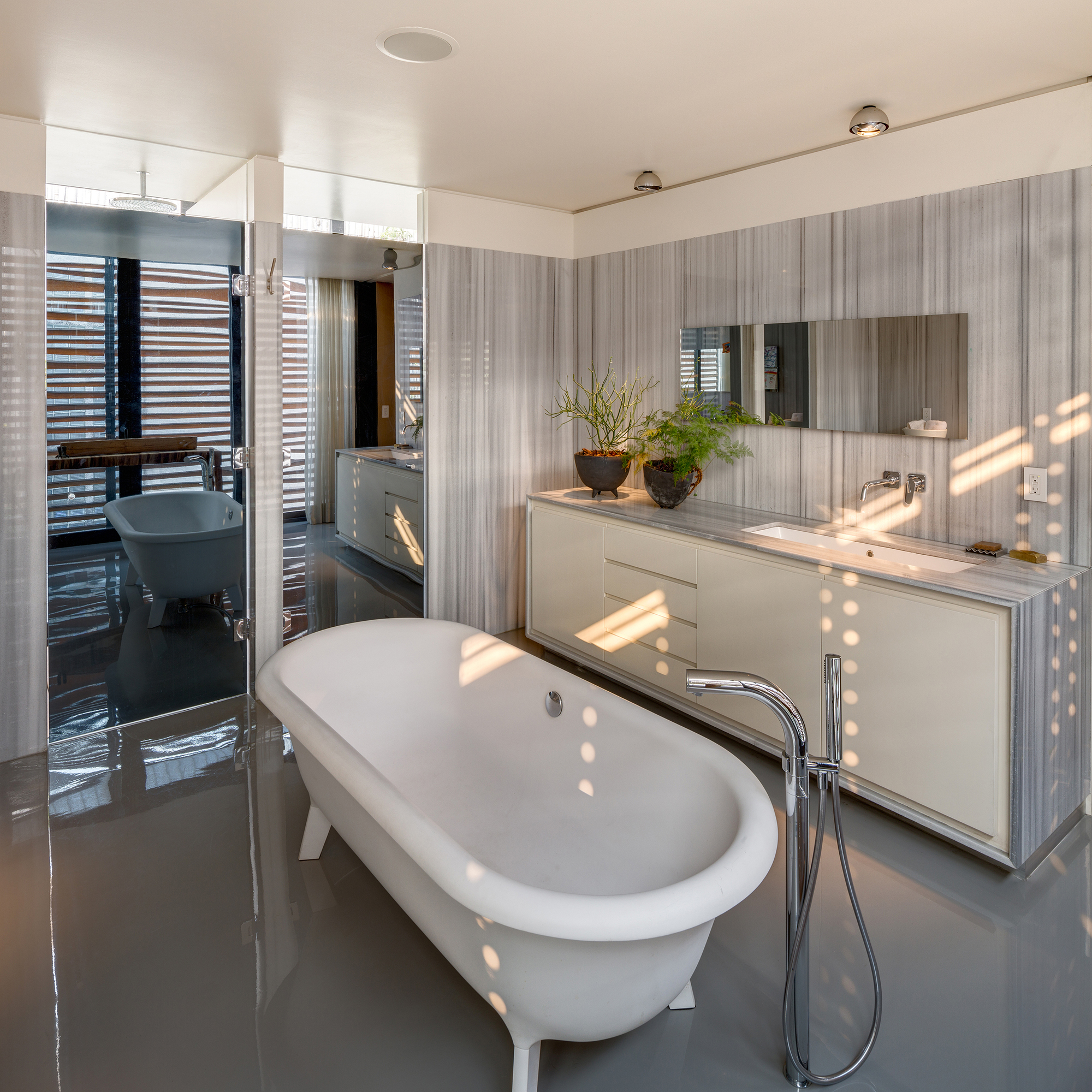 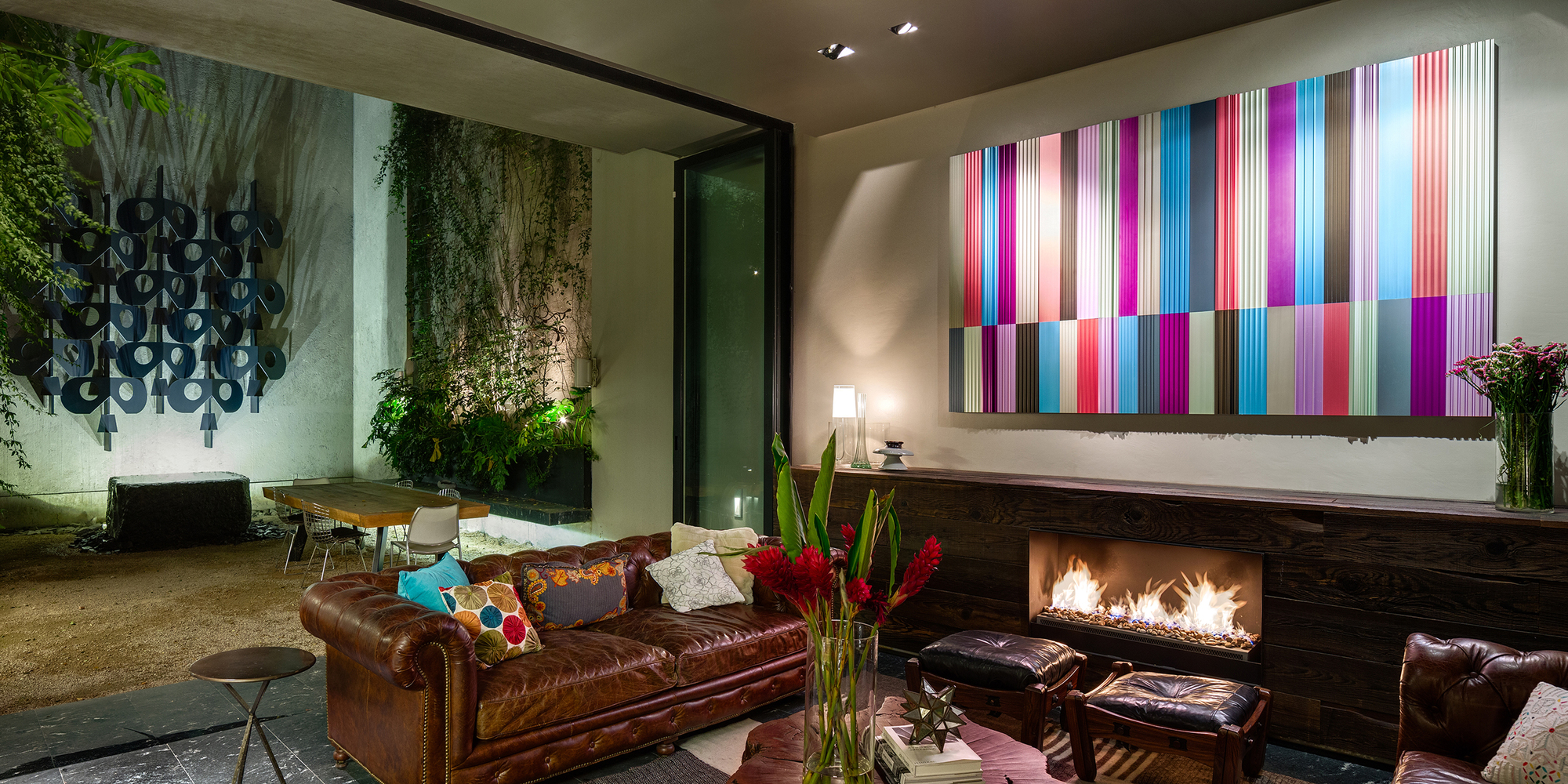 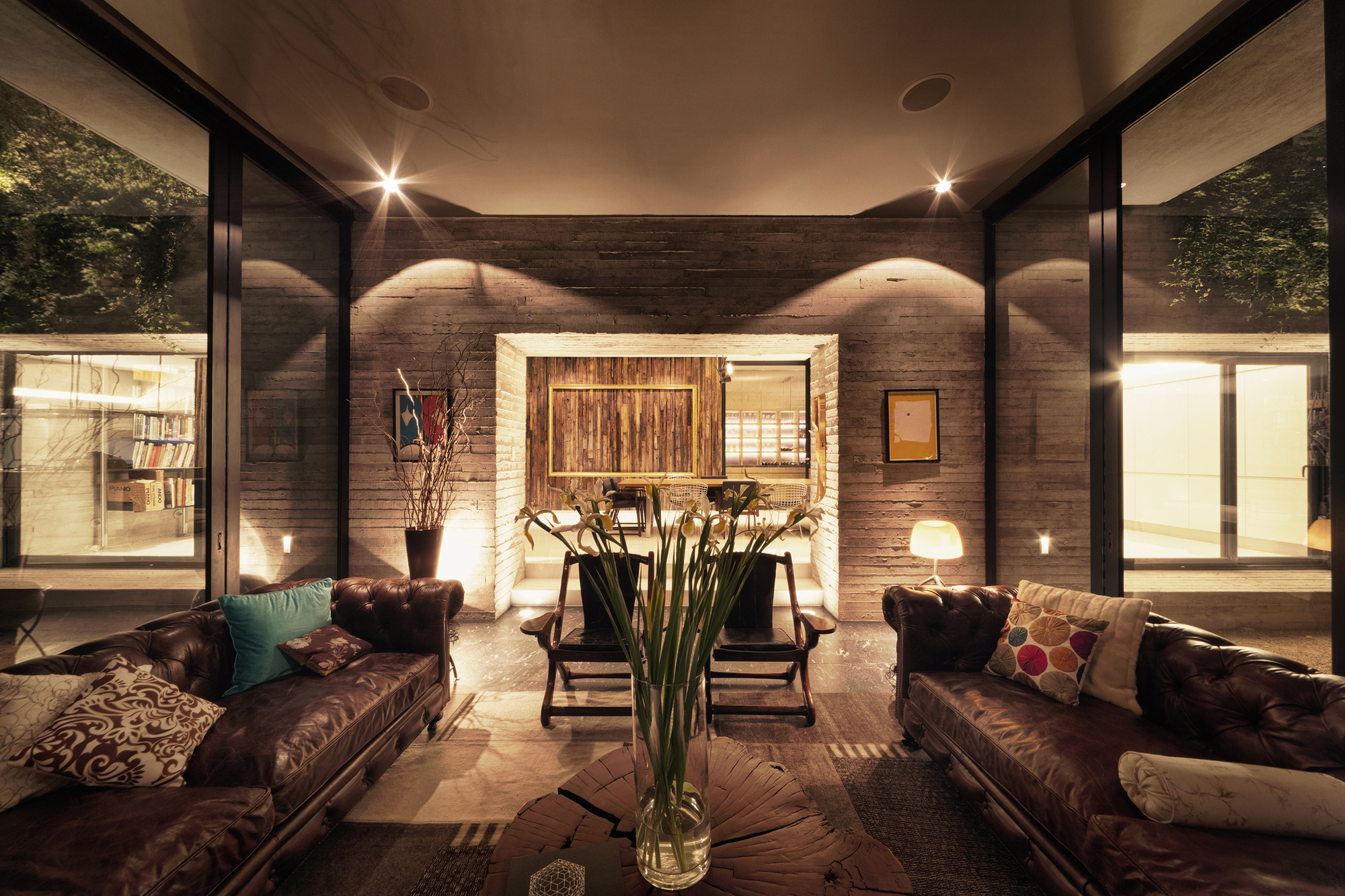 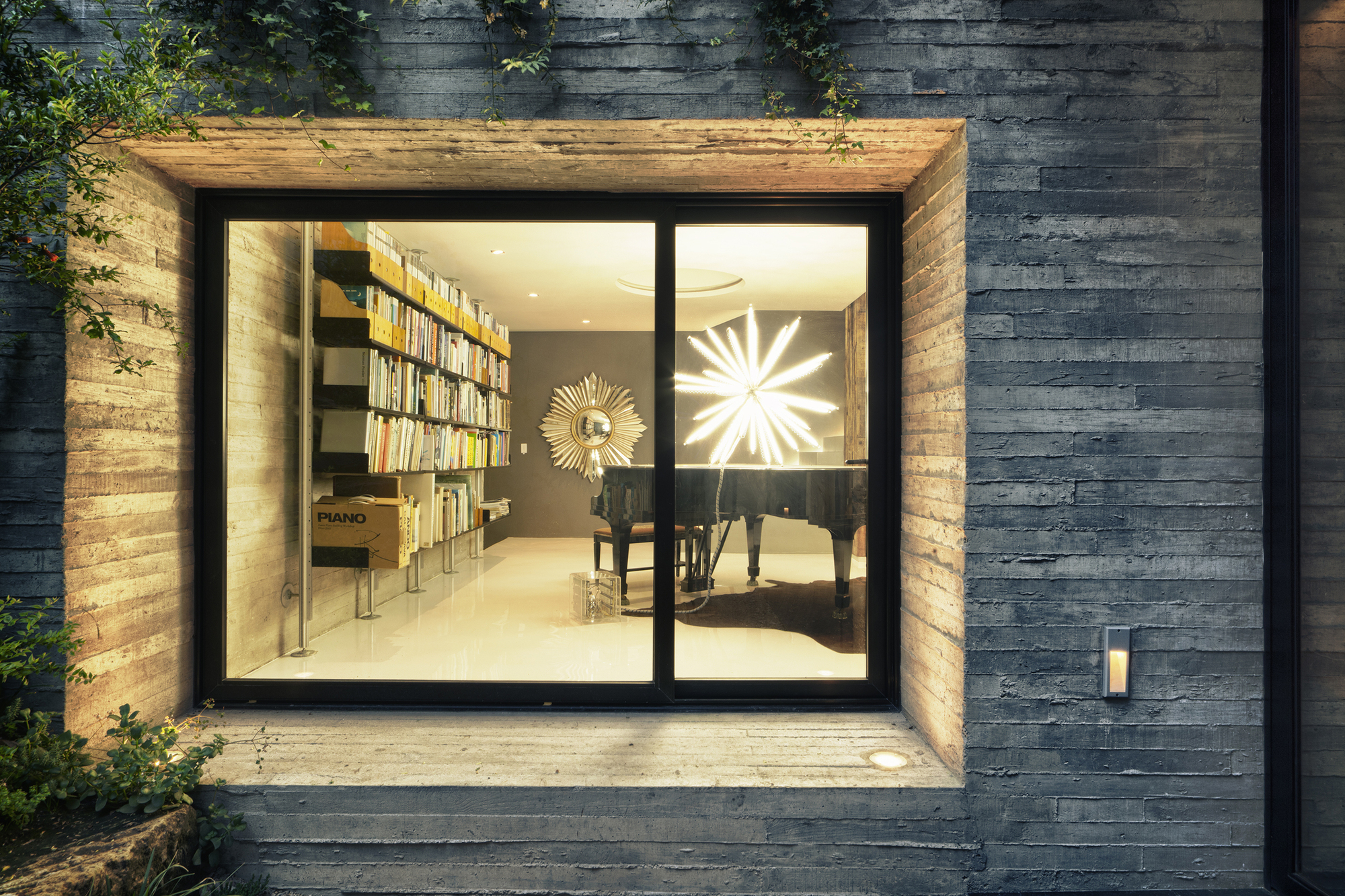 The basic design methodology involves an essential challenge to any system of design. This is achieved primarily through a critical analysis of two aspects:

For analysis I really mean questioning not only the extrinsic or apparent elements but also those intrinsic or intangible. For example: In the first floor we consider orientation, geometry, constraints, solar exposure, views, physical factors (climate temperature, noise) hours of operation.

The program is not a list of needs, instead, we try to integrate both material needs as well as affective and cognitive needs. The basic question is how to integrate dynamic needs to a seemingly static exercise (a building). The solution is often uncertainty, understood as a scheduled failure. The site makes the program which in turn defines the site. From the general to the particular and back, inside out.

This is a lot between party walls located in Lomas de Chapultepec in Mexico City. It is a virtually flat and regular site (13 of frontage x 25 of depth). The only view corresponds to the front facade (west orientation) into a wooded glen, as there are taller buildings on the three boundaries.

North south orientation on the short or cross axis.

The dimensions of the site (about 310 meters) are not typical of this area because it mostly consists of larger lots (1000 square meters).

The construction respects the setback dictated by building regulations (5 meters setback on the front) and approaches the southern boundary for maximum sun exposure during the day. The design scheme raises two primary actions: intervening the topography, to generate a new “tabula rasa” where besides serving as a base it is also inhabited inside. On this new modified territory, two boxes or volumes are stacked where the negative space becomes as important as the positive space. Creating spaces like the living room on the ground floor and the gym in the first floor, through a bridge and rooftop terraces.

In turn the interior spaces are also determined by programmed volumes (storage, work, etc). This system of organization responds to an analysis of the program where the functions are grouped by level, with the public area on the ground floor (living room, dining, service) the family area on the first level (living room, bedroom, gym, garden) and on the top floor the more private area (master bedroom, living room, terrace, dressing room and bathroom).

The street facade respects the required setback, and also sets a dialogue with the typology of the neighborhood, which in order to work with an upward slope, often presents a masonry wall (volcanic rock) and vegetation on top. Thus continuity is achieved in the urban fringe. One element of design that was used is to achieve the depth of the site can be understood from different perspectives, both long and short-sense. This allows for a large spatial extent (both inside and outside).

To achieve the desired finish, to translate the natural features of the environment, we chose a brutalist concrete. To this end, we used formwork based on reused poles horizontally modulated every eight inches. This texture is very attractive when it is bathed in natural light during the day and artificial light at night, which includes flush lights on the lower floor. Another purpose of this finish is to get the first level to transmit its own topographical nature, as if it were pre-existent and emanated naturally from the ground.

Different types and uses of wood

Firstly, we used American oak, inked and placed in panels hiding doors and modular boards, which in turn contrasts with a much coarser application of reused wood on the stairs, the larger interior volume than starts on the ground floor and extends to the first level. This element promotes visual communication between the two levels.

This finish was chosen so that there was a clean and smooth relationship between different environments, and to simultaneously highlight the coarsest textures of concrete and wood. Epoxy resin is used on all floors of the house, except in the living room and gym, which by their nature and location suggested a different application. Thus, in the first case we resorted to a dark marble (ebony) and in the second, ash staves.

Anodized aluminum is used for doors in black and in some cases, steel profiles with the same finish. The purpose was to ensure that the doors are naturally incorporated with the outside, for which we also designed them to be fully folded, so that the boundaries between interior and exterior are diluted. This item, along with the large windows allow unobstructed natural light, and a play of reflections that enrich the composition.

Designed to dissolve the boundaries of the site and to provide greater depth and breadth, the landscape is present at all levels -Gardens, terraces, green roofs and planters. Thus any sense of confinement is avoided and instead, we promote a continuous communion with green areas. Another purpose of gardening was to integrate the building with the natural environment and act as if it was already part of it and did not look artificial or “manufactured”. For a more efficient and self-sustaining maintenance, endemic species were chosen and a controlled, low consumption irrigation system was installed. Finally, the landscape design is incorporated with green areas, trees and gullies of the front.

The first action or level is structured through exposed concrete walls that simultaneously address the materiality of the earth, the intermediate box is made of concrete walls, and the second box is a space frame or Vierendel truss that achieves large spans.

The verticality of the project coupled with a pre-existing lateral building forced us to think of different mechanisms for the light to filter into the first level, this was achieved through skylights and small windows. The solar incidence on the third level (south facing – east to west) forced us to think of a lattice to offer the desired protection without compromising the views. Large windows allow reflections to be very important in the design as well.

Although the various spaces are rarely contained by a door, spatial clarity is achieved by dividing elements or level changes, while achieving integration between the interior and exterior and a spatial fluidity. 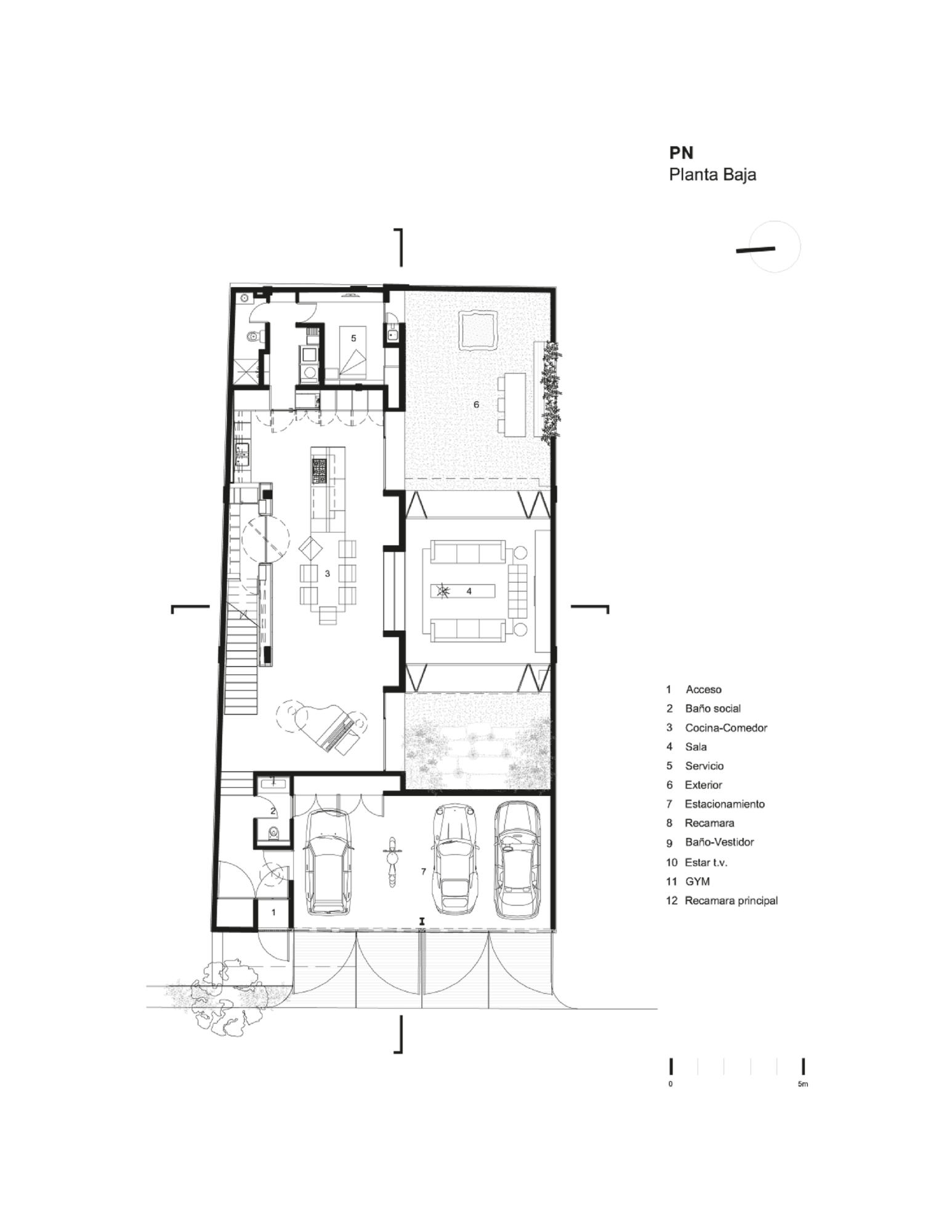 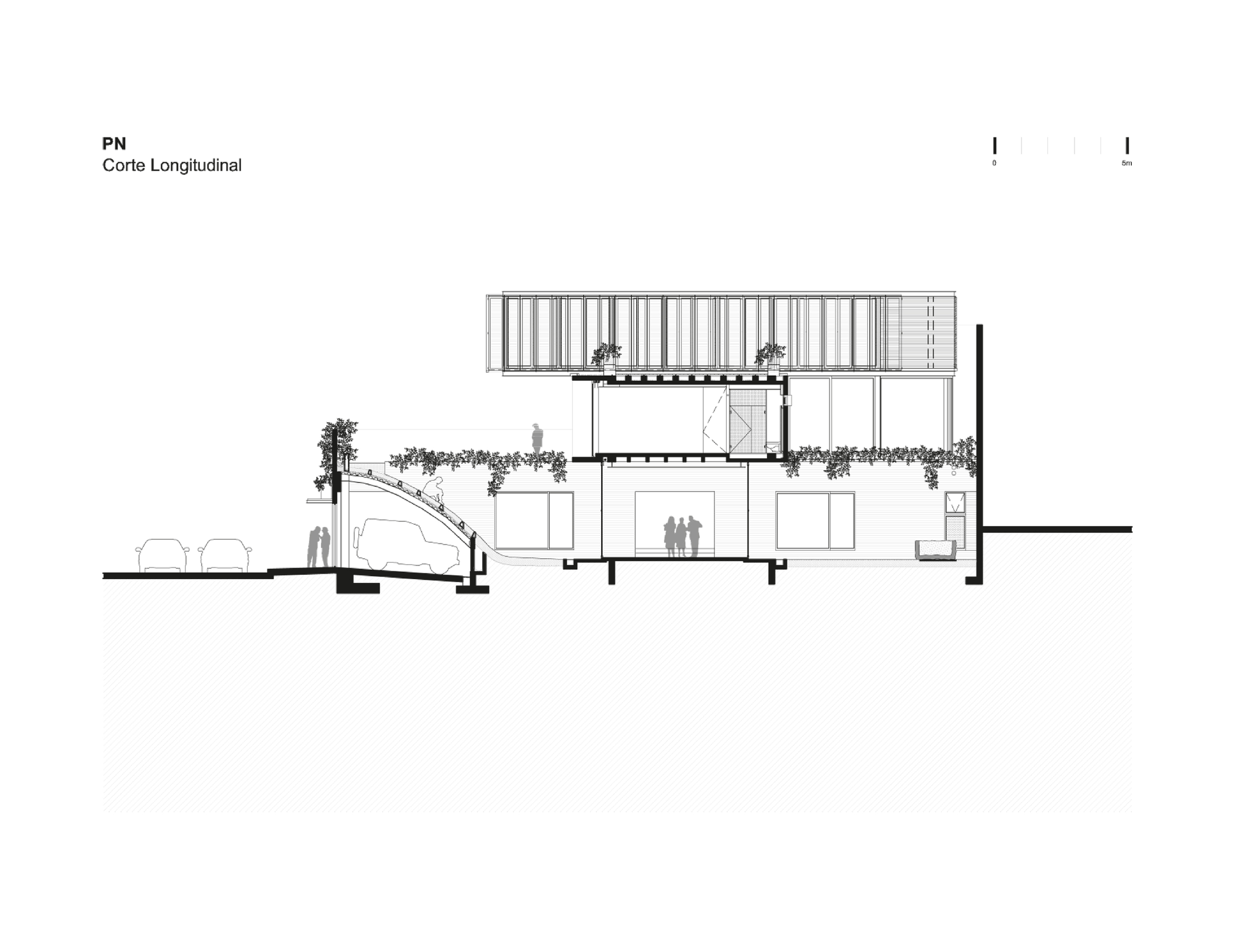