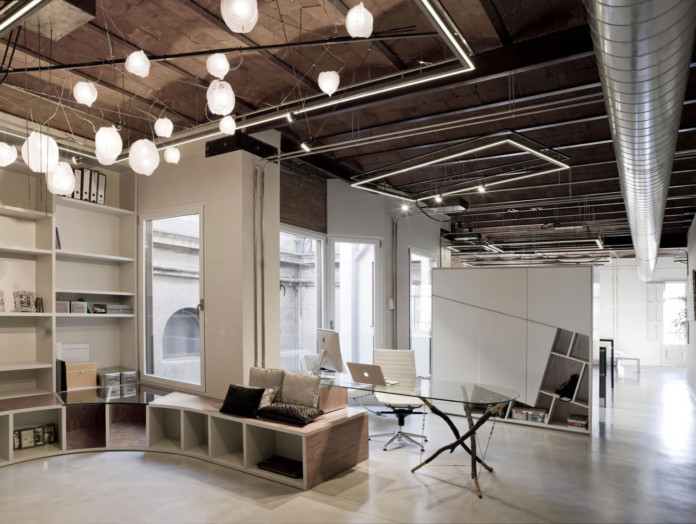 The interior design has an industrial look due to all the unfinished details exposed: brick walls, ceiling beams, air vents and all the electric wiring.

The design layout was adapted to the client’s wish of having natural light inside all day long, and for that all mid-walls were demolished and the windows were enlarged.

The Core, featuring the guest room and the service areas, is the only annexed side built from the scratch.

The open plan space is created by the “communicating vessels” which pass through the entire house, meaning the sleeping area, the dressing room, the washing area, the kitchen, the library and the living area.

There have been installed custom made ceiling frames in order to obtain an increased quality and quantity of light. Each frame consists of three distinct illuminations: an upper Led line emphasizing the vault ceiling material, a lower LED line which provides the light equally in the house and hanged adjustable LED spots which are adaptable to one’s needs, such as reading or maybe knitting.

The ‘rotonda’ library is always flooded by light and communicates with the enclosed 1923 Coliseum theatre through the bow windows.

The gallery and the windows area in the bedroom were turned into a green relaxation space with a deck including a Jacuzzi bathtub.

Because the building needed restoration after being bombarded during the Spanish civil war in 1938, the architects decided to remove all the overlaid plaster layers from the walls and the ceilings in order to search for the genuine brick walls.