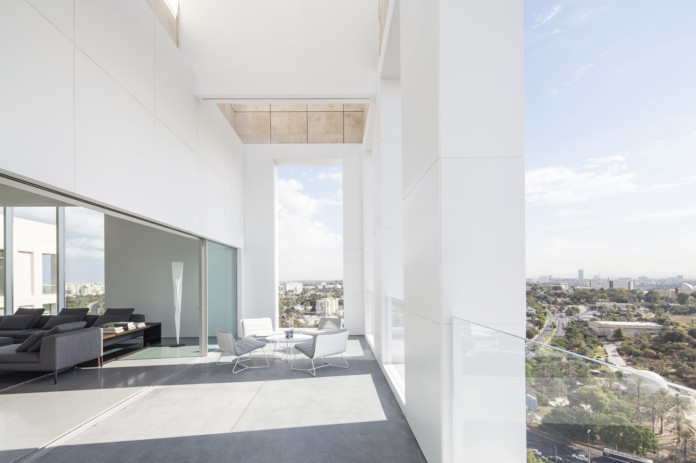 As its name suggests, Layers of White is a predominantly white apartment that was successfully renovated by Pitsou Kedem Architects. It is located in Tel Aviv-Yafo, Israel, it flaunts 5,381 square feet of space, and it used to feature a circular motif at its core as well as a long corridor that divided it into two separate wings. The architects wanted to join these two wings by implementing a three dimensional cladding made out of aluminum sheets complemented by geometric textures. 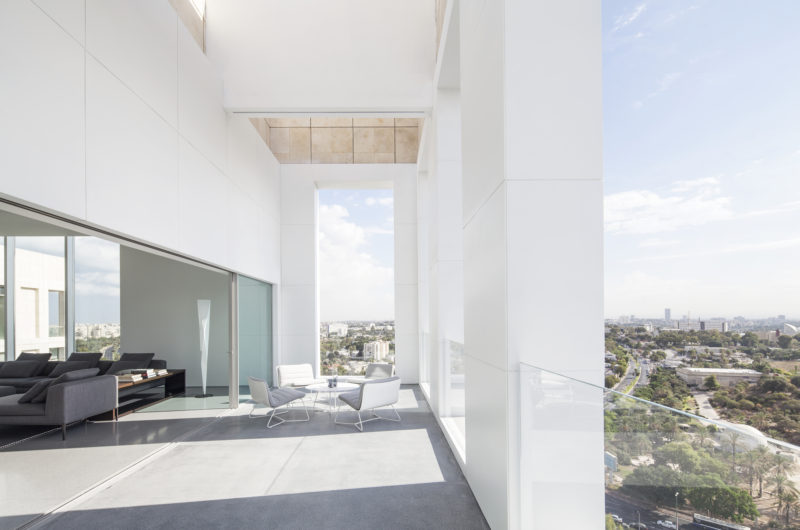 The color white was used extensively for this project, but it was used in different shades and hues for a touch of variety. Another important modification involved the replacement of the original screen walls with large windows that offer exceptional views of the distant city.  The balcony boasts a special “green” wall that includes natural plants placed within geometric frames.
The overall interior atmosphere is a calm and meditative one that encourages introspection and relaxation. 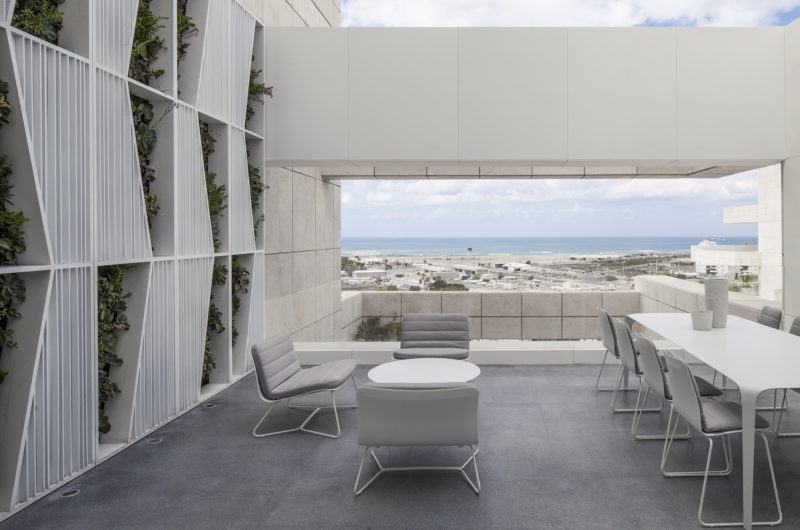 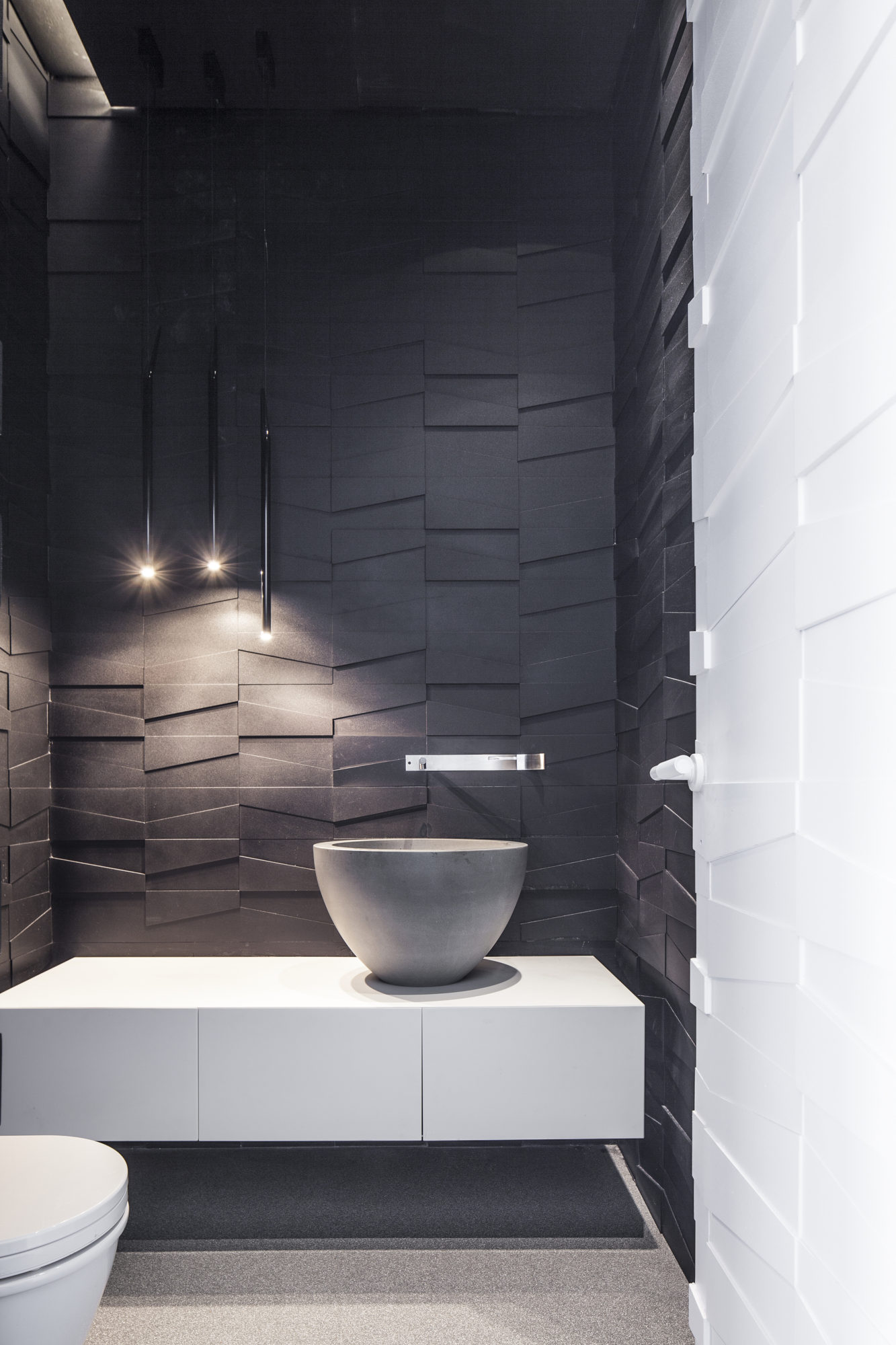 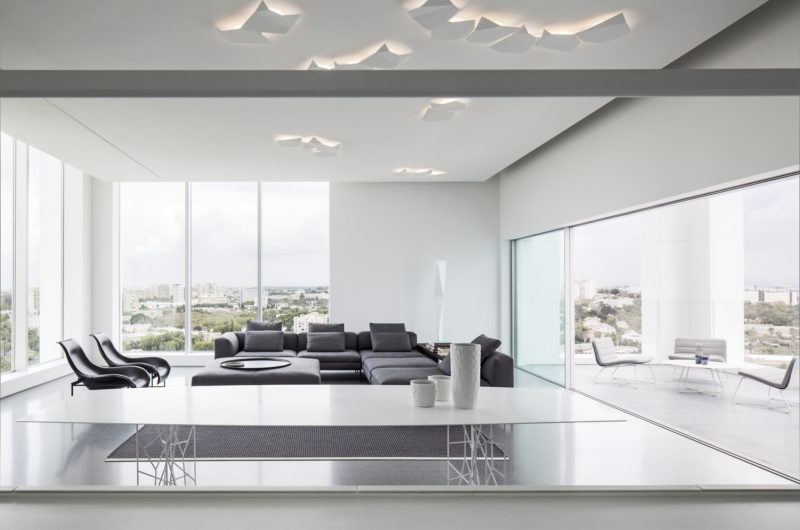 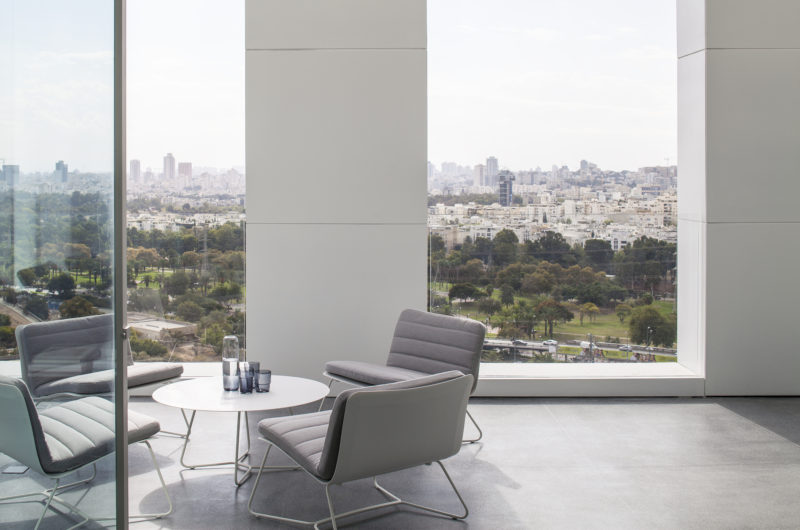 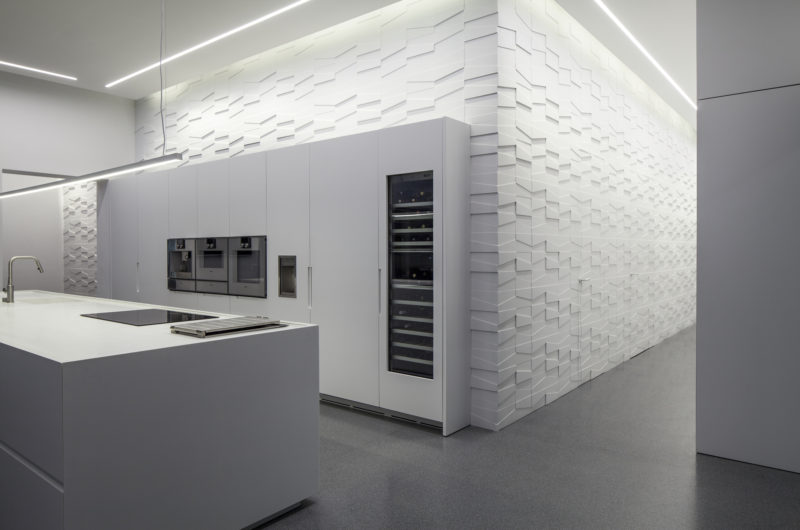 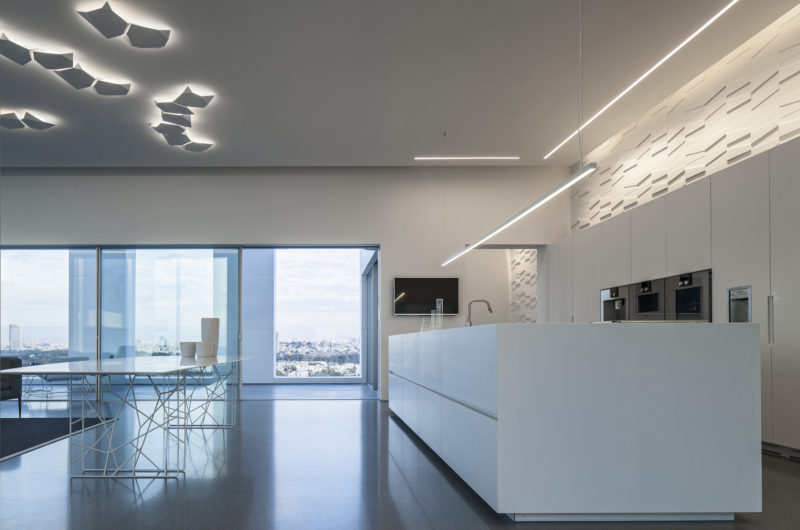 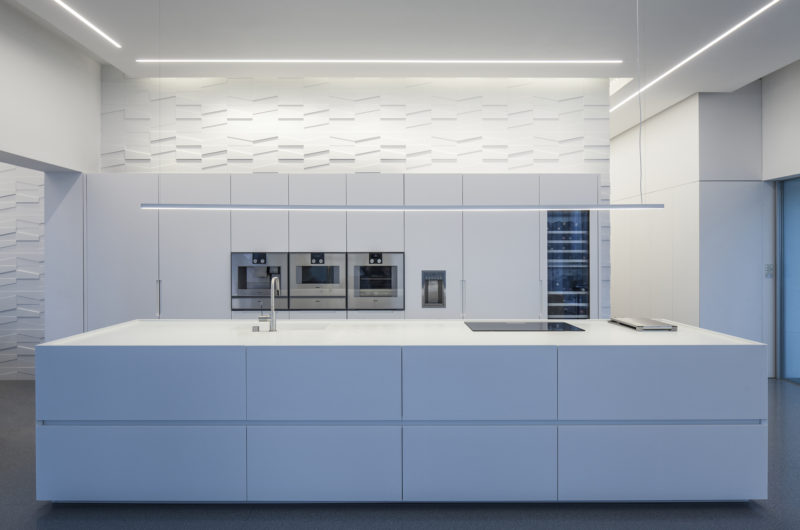 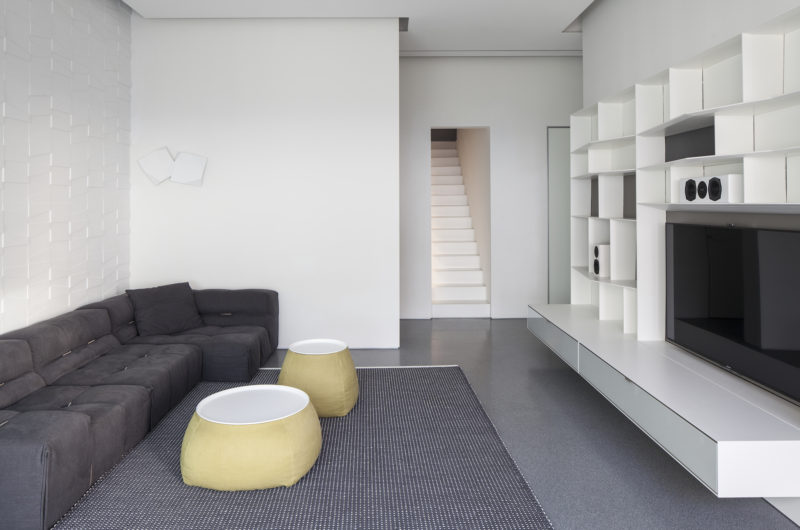 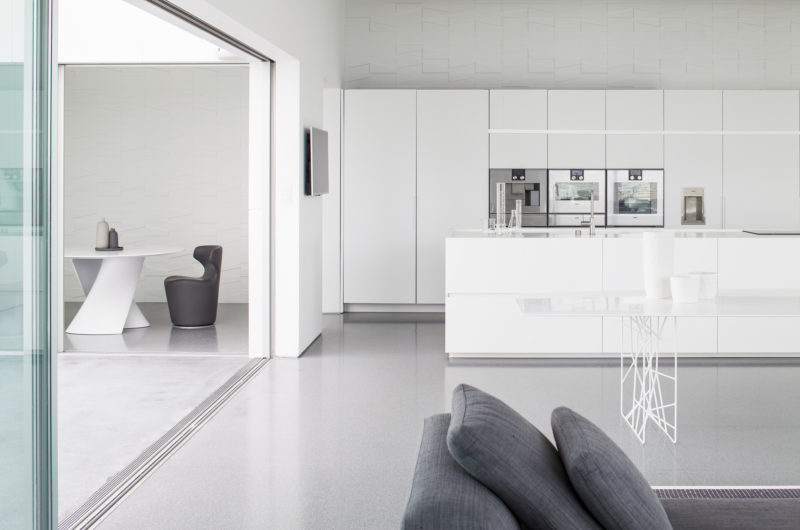 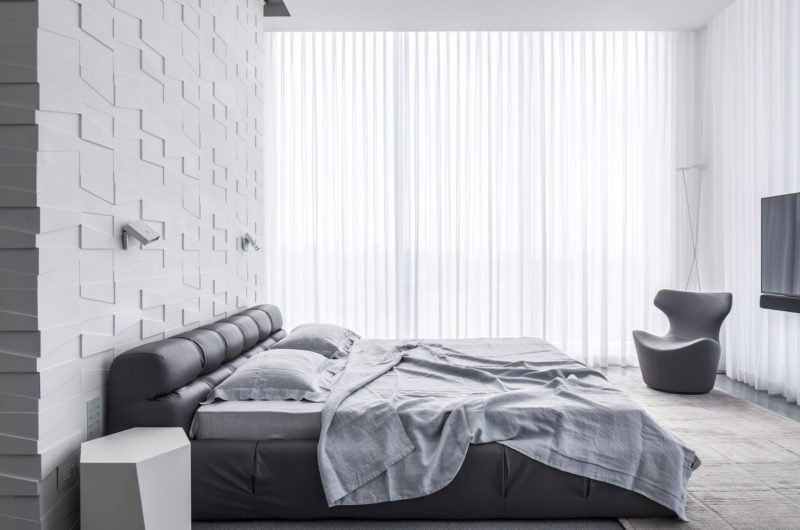 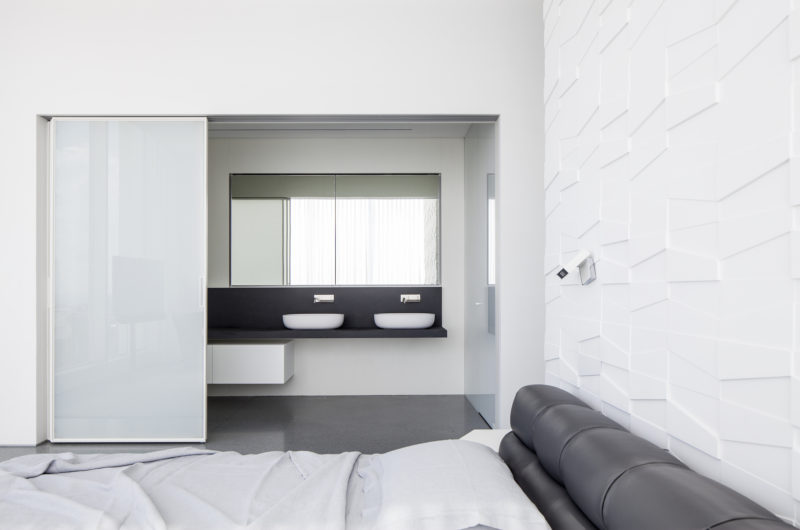 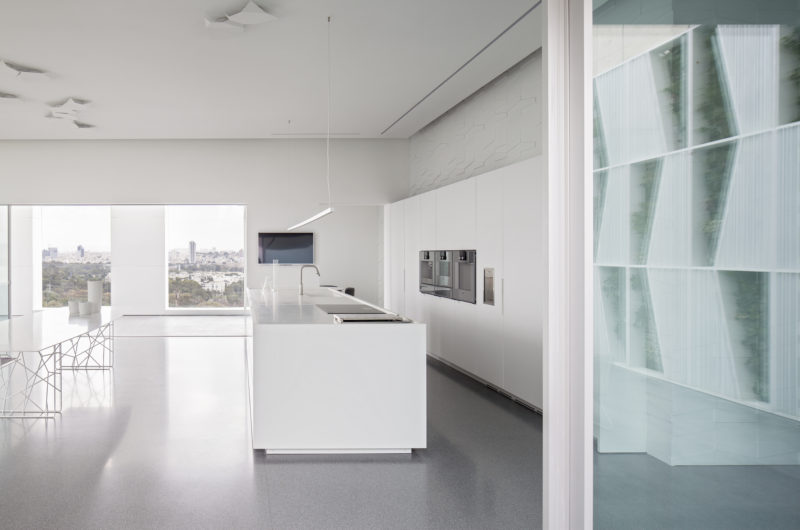 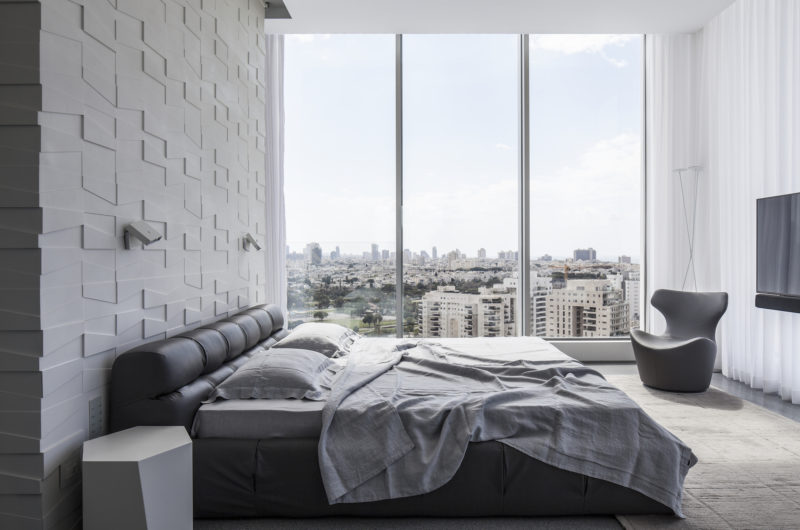 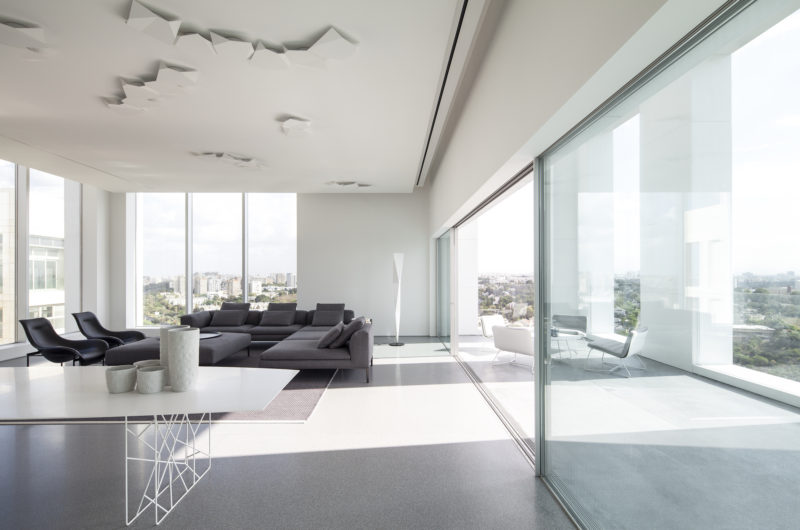 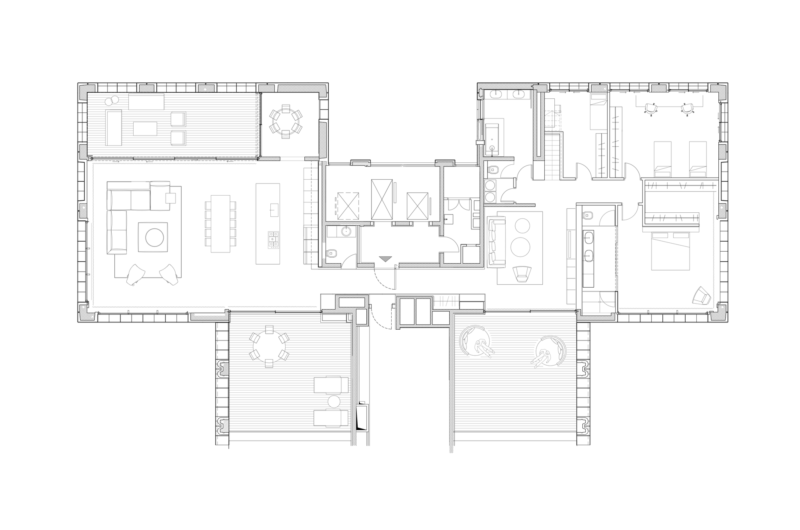 A spacious, penthouse apartment built around a central circular motif that divides the residence into two parts with a narrow, long corridor that, in essence, divides the home into two distinct wings.

In an attempt to unite the two sections and transform the concrete nucleus into a connection between the spaces, the architect chose to cover it with dynamic, developing geometrically shaped textures especially designed for the project.  The cladding is three dimensional and made from large sheets of white painted aluminum hung on the nucleus’s ceiling.  The apartment’s spaces were designed to create a meditative atmosphere with monochromatic sheets all based on the color white.  Through a play on light and shadow and textures, multiple layers of white, almost ”colorful” in their richness are created, displaying many varied and deep hues of white.

The apartments screen walls, originally small aluminum squares, were exchanged for huge windows with no horizontal divisions that allow the urban landscape to burst into the apartment’s spaces.  The city’s dynamism, its depth and richness of color, its differing landscapes, all find expression in the monochromatic, almost monastic space that seems to invite the urban environment to coalesce with the apartments design.  Layers of pure, soft white, which appear to have taken on a different frequency and strengths from the beat of the city.  The geometric, developing shapes in the form of clusters of triangles reverberates, despite its whiteness, with the city’s pulse and energy.  The same triangular clusters appear as a motif on the balcony’s “green” wall that was especially designed for the apartment and in which we will place plants in similar geometric frames.

The apartments light fittings complete the considered and thrifty look of the apartment’s lines.  Long, thin strips of light emphasize the linier axis along the length of the corridor and ceiling fixtures that appear as works of origami compliment the triangular, three dimensional walls.  Hidden lighting is installed along the walls that emphasizes the surfaces of the triangles and creates, from the central wall a wall that is also a sculpture, dramatic and dynamic.  Thus the apartment’s various layers of white create a surprising depth and geometrical, original and obvious forms against a pure backdrop and a reduction in the apartment’s colors.  The designer’s choice of such a monastic and silent environment provide the perfect backdrop that enables the space to encompass the entire city seen on the horizon.

How to transform your garden with outdoor lighting